Accessibility links
Why'd It Take So Long To Invent The Wheel? : Krulwich Wonders... It's only by reflecting on all the gadgets surrounding us that we appreciate how our collective inventions were once unimaginable — even the wheel.

Why'd It Take So Long To Invent The Wheel?

Why'd It Take So Long To Invent The Wheel? 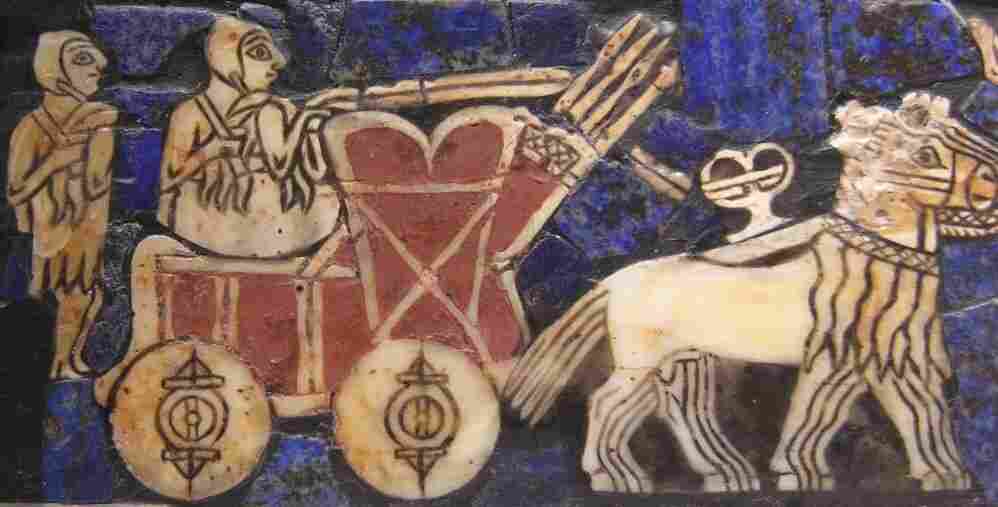 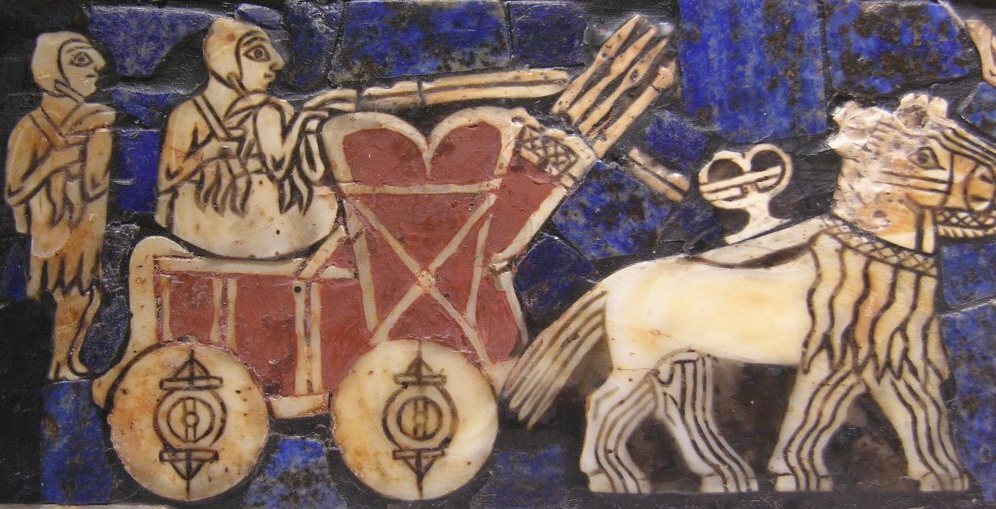 Way, way back, when your caveman grandpa or grandma had to lug something heavy back to the cave, what did they do? Maybe they carried it. Or dragged it. Or tumbled it down a hill. But what they didn't do is wheel it home. They couldn't. Because there no wheels to wheel with. Which is puzzling, really.

How could our great, great, great grandparents go for tens of thousands, maybe hundreds of thousands of generations not thinking, not making, not even imagining a wheel? Wheels appear extremely recently — around 3500 BC — when people were already counting, writing, farming. Why the long wait?

Once wheels came to be, it's hard to imagine not imagining them, says British writer Jonnie Hughes. Wheels, he thinks, are surprisingly unintuitive. No doubt great grandpa knew that circular things roll, but to get from rolling spheres to wheels, that's a tricky, subtle, business. 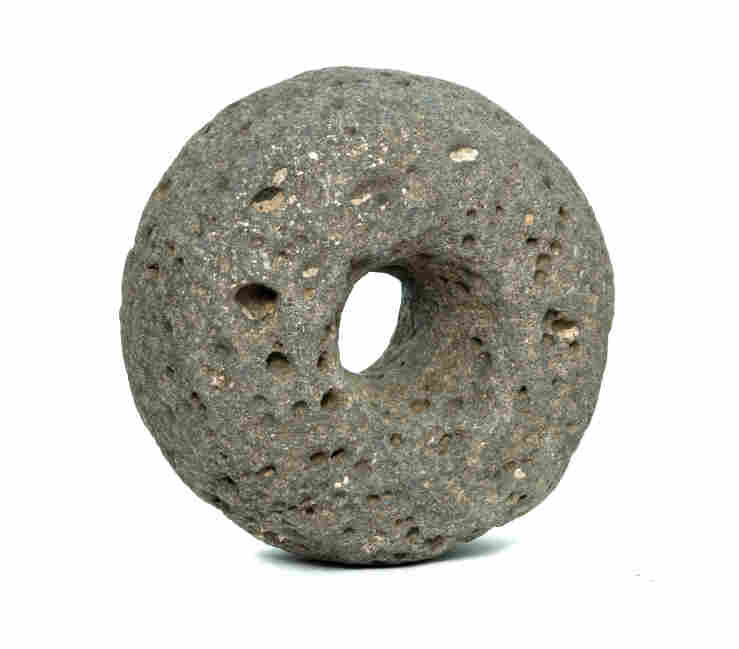 Here's one version of how it might have happened, illustrated by him, which makes me think, "yeah, I guess this wasn't so easy." We're going to make a cart, because carts are the first wheeled objects pictured on ancient vases.

TURN ONE: Use tree trunks as "rollers." Stick 'em in the back, roll your load across, then repeat.

TURN TWO: Add a plank between the load and the rollers, reducing friction. 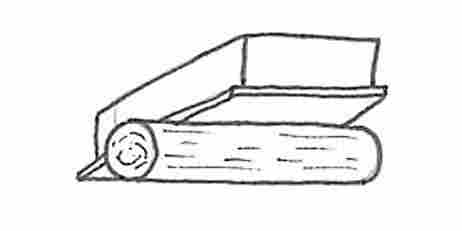 TURN THREE: Stick Blades — like a sledge — under the board to reduce friction further. 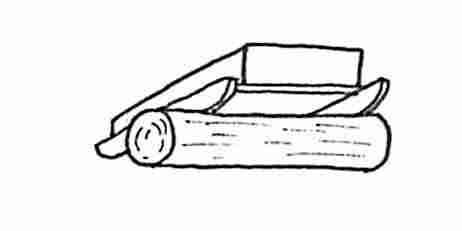 TURN FOUR: The blades create grooves in the tree trunks that stabilize the load. 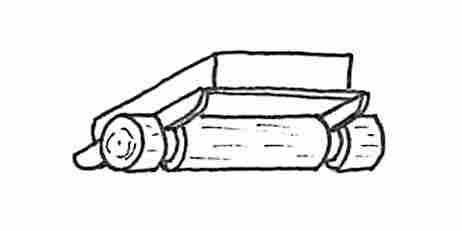 TURN FIVE: The tree trunks are hollowed between the grooves so that different-sized sledges can fit on top (and an accidental axle and wheel pair is formed). 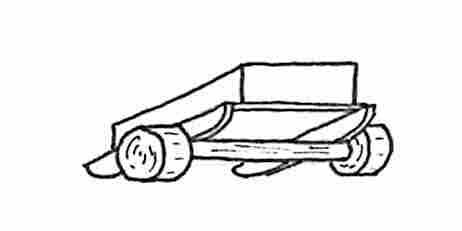 TURN SIX: Pegs are attached to the bottom of the blades, in front of and behind the position of the axle, so that the axle is contained underneath the load and there is no longer the need to repeatedly place rollers at the front (that must have been a great day!). 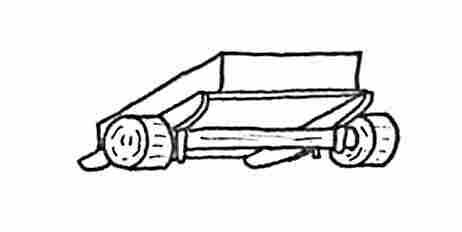 TURN SEVEN: To make the cart stronger, the axle is fed through holes fashioned in the blades of the sledge. 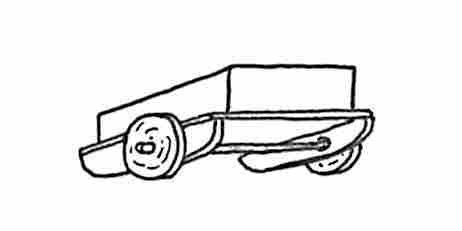 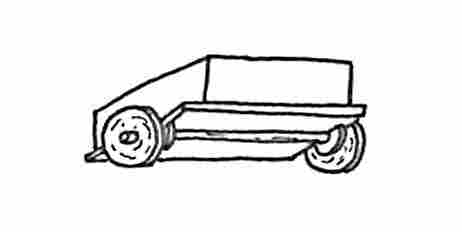 All illustrations by Jonnie Hughes

Pop versions of How We Invented The Wheel imagine a single inventor poised over a roundish thing, eyes wide, suddenly seeing what no one else has seen; all around him, people are doubtful, suspicious, then, when the thing starts to actually roll, there's a shout of surprise, then joy, then envy. ("Why didn't I think of that?")

... thousands of years and scores of human generations. There may well have been the odd genius involved along the way, conducting his or her own mind experiment ... but in the main, the invention of the wheel was a routinely get-rich-slow affair.

Living, as we do, in the Era of Steve Jobs, immersed in a tsunami of new, miniaturized, clever gadgets, we seem to be inventing technological leaps all the time, but of course, the phones, the iPods, the rockets, the medical devices, they're baby-steps too, incremental improvements on technology we know. Yes, the changes feel startling, but they still happen step by step. We don't invent our future in big leaps.

It's only later, when we turn around and see what we've done, only then do we appreciate that what we've collectively invented was unimaginable ... until it was there.

Jonnie Hughes' new book about the evolution of ideas is called On the Origin of Tepees: The Evolution of Ideas (and Ourselves), (Free Press, Simon & Schuster, 2011).

A previous version of this post misidentified the age of the stone wheel pictured.