Accessibility links
The Termite's Secret Weapon: Spit! : Krulwich Wonders... Imagine if your spit could lasso a bully, and knock him down. The amazing Australian meat ant can do it -- with just one shot.

This image is amazing, if I can decode it for you.

It's a David and Goliath moment: A little guy takes on a big guy (actually, here the big guy is a gal) and against all odds, the little one wins. In the bible, David knocked Goliath down with a few rocks and a slingshot. Here, David is a termite and the projectile in this case is ... spit. In lasso form. And it works! 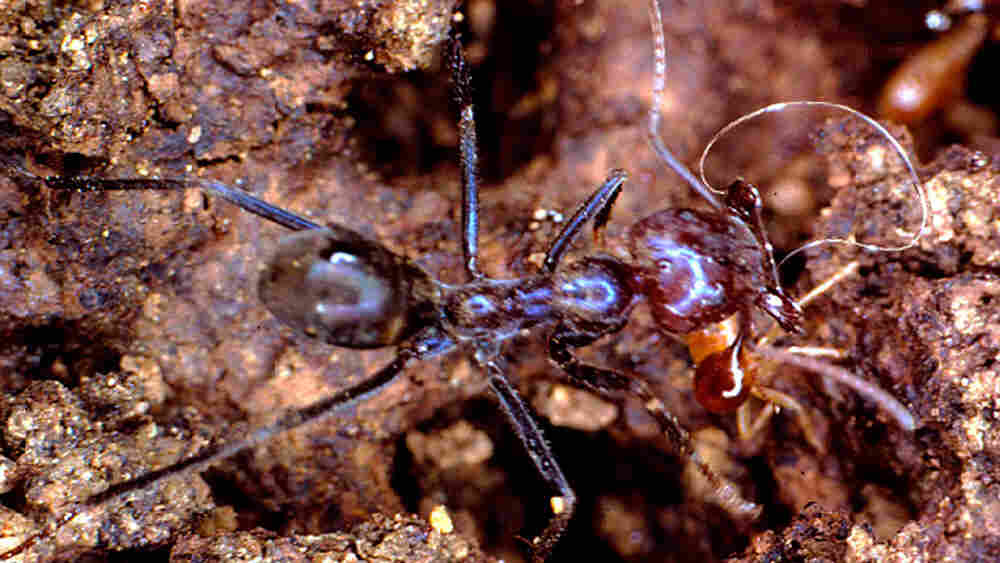 The large insect at the center of the photo is an ant (Iridomyrmex purpureus); she's the glossy behemoth you see right away, her butt to the left, head to the right. Underneath her head -- obscure at this instant, but you can see a hint of gold underneath her head -- that's our hero, the little termite.

That termite has just launched a loop of spit; you can see it rising in the air just in front of the ant. "Spit" is my word. "Secretion" is the scientifically proper word. It comes out as a fine strand, and it is sticky. Very sticky. The termite has aimed it at the ant, and it will land kind of like a lasso, constricting the ant so it can't move.

Now comes the "after" picture.

Here's the same ant looking a little messier; her surface is covered with sand and debris because she is totally sticky. She's been covered with secretion. 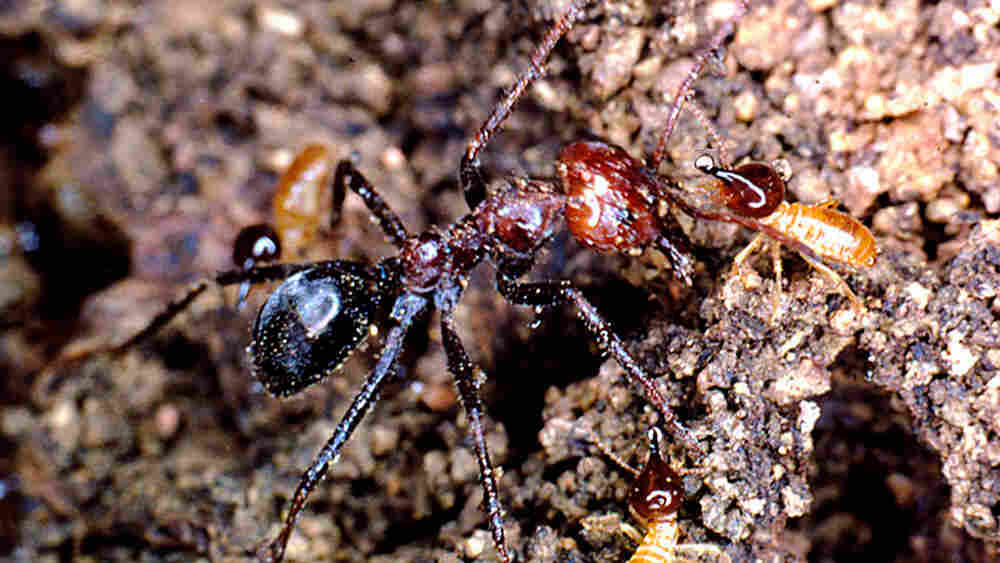 She is, according to Cornell professor Tom Eisner, who was there and took these pictures, unable to move now. There are three termite soldiers keeping her captive. One is under her middle leg, slightly out of focus. The other two are more prominent with their golden bodies, and if you look very closely at the termite's heads, you should be able to make out little white bubbles at the tips of their snouts. Those are dribbles left from the termite discharge. Kind of like extra gunpowder.

Wanna Be A Termite?

When I was in eighth grade, there was a boy, bigger than me, who would wait on a staircase landing as I went up to art class, and if he could (and in those cruel years he almost always could) he would grab me and wallop me for as long as he pleased. He was, you might say, the purpureus ant of my adolescence and all I can think, looking at these photos, is what a thing it would have been if I could have twisted my head and whacked him with a loop of whatever that termite was spitting. There aren't too many moments when I'd wish to be a termite, but every now and then the idea is suddenly attractive.

How He Took the Picture

For those of you who are interested, here's Eisner's description of how he took those two pictures. It comes from his classic book, For Love of Insects:

"I did an experiment in the field that gave some idea of what happens when ant and termite are brought into confrontation. I had located a Nasutitermes [termite] mound that projected from the very midst of a nest of the Australian meat ant, Iridomyrmex purpureus(sic). I brought ants to the surface by tapping the entrance to their nest, and induced termites to emerge by laying open their mound near its base. To make sure I would get as precise a record as possible, I had placed a tripod-mounted camera at the scene so I could photograph the ensuing events. Things happened fast as ants and termites, in large numbers, came into contact. Many termites were bitten and killed and dozens were sprayed and left visibly contaminated with secretion and debris. I tried to watch things as best I could and just kept pressing the shutter at random intervals. The photography paid off. In one picture [he's referring to the picture above] the emergent filament of spray is actually seen as it emerges from the snout of a soldier. Things soon calmed down, however, when ants no longer ventured over the ground held by the termites."

Excerpted from For Love of Insects by Thomas Eisner. Copyright 2003 by the President and Fellows of Harvard College.  Excerpted by permission of the publisher, The Belknap Press of Harvard University Press.