Accessibility links
What's A Smoot? : Krulwich Wonders... Some of us use kilometers to measure distances, while others prefer miles, but if you are exactly 5'7" you could just use your body — if you know smoots.

Have I missed something? What's a "smoot?"

Check out this Google Earth map, which allows me to measure the distance between two points using miles or meters or feet or yards, the choice is mine. Google has a list of options, but notice the ninth one from the top, right below "nautical miles" — have you ever heard of a "smoot?" 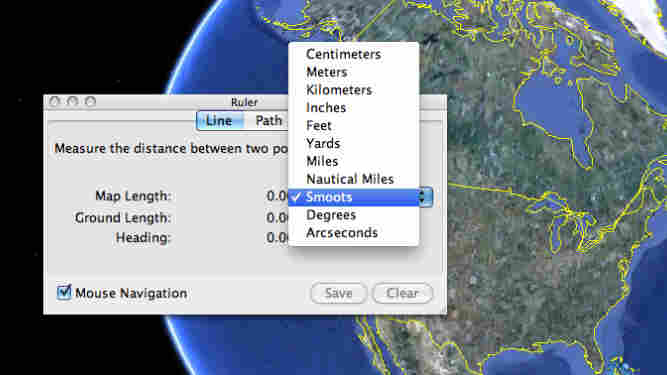 Go to a Google calculator, there it is again: You can translate meters, miles or what-have-you into 'smoots.' So a smoot is a Something — but what kind of something? A quick web search led me to a short essay by British journalist Warwick Cairns which says, intriguingly:

[A] smoot is the height of a man — and not a man in the sense of men generally, or an average man, but a man, in the sense of Oliver R. Smoot, the five foot seven inch Chairman of the American National Standards Institute and President of the International Organization for Standardization.

Hmmm. This is getting interesting ... 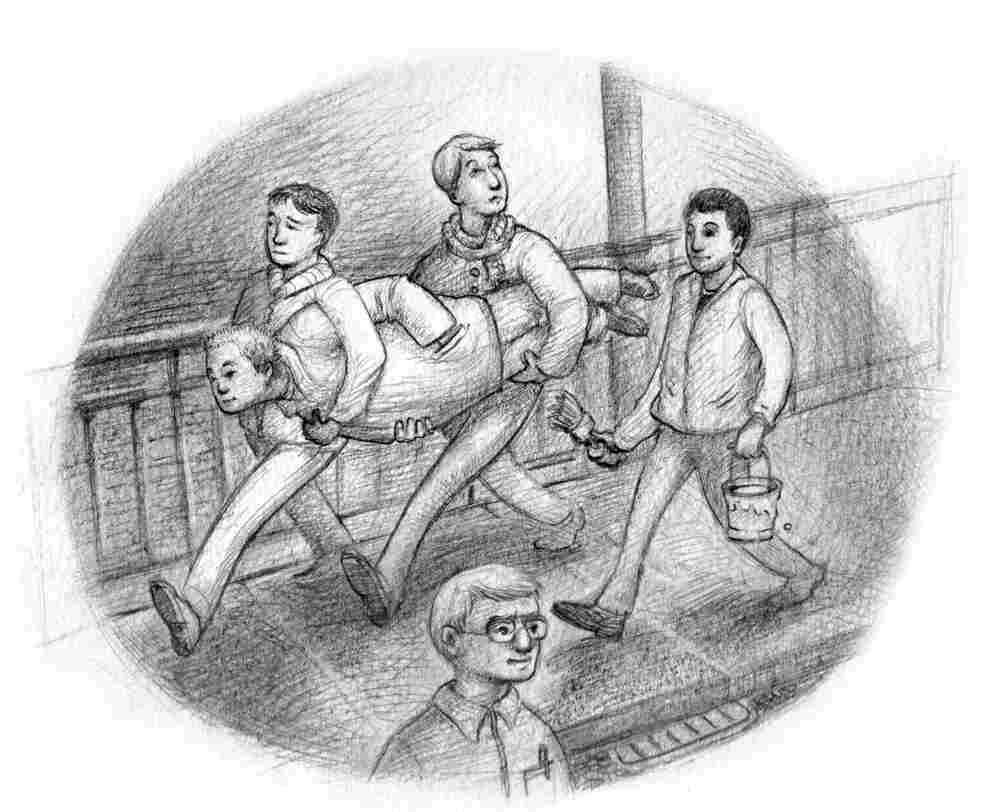 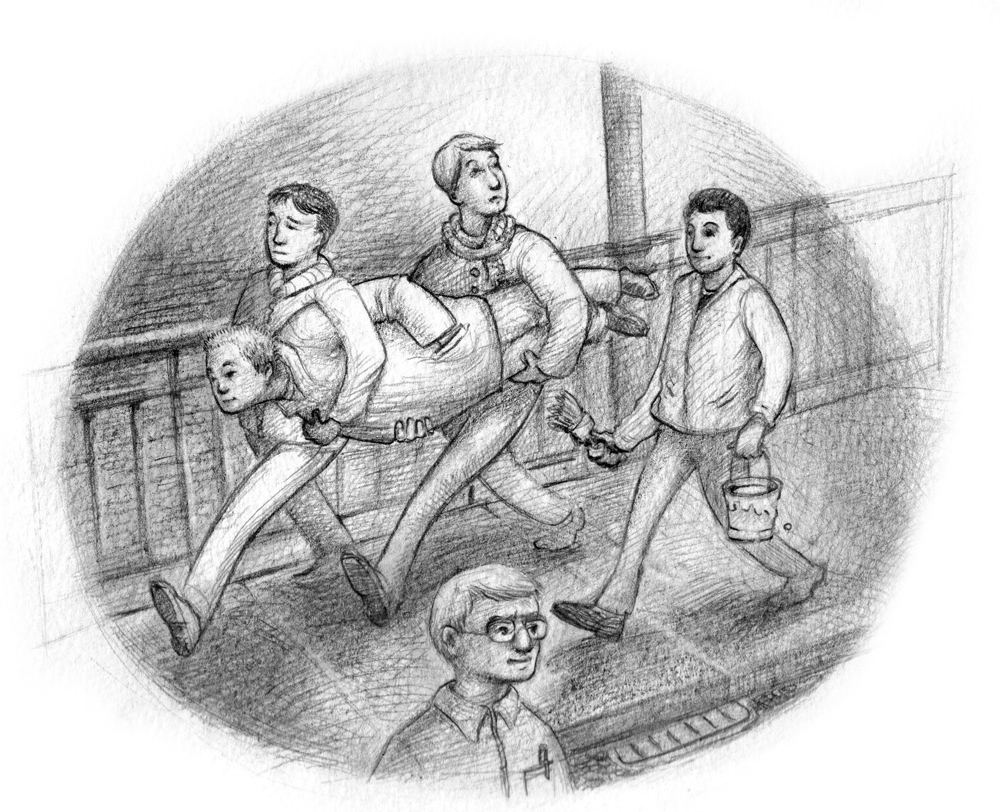 The Origin Of The Smoot

Several internet sources say that back in October, 1958, Oliver R. Smoot was a first year student at MIT, trying to join a fraternity, Lambda Chi Alpha. During "pledge week," wannabe frat boys were asked to do semi-insane things to demonstrate their willingness to be humiliated by upper classmen, a test of character for certain fraternities.

In Oliver's case, the assignment was to go with a bunch of other pledges to a bridge — the Harvard Bridge that spans the Charles River — and measure its length, but not in the usual way, says Mr. Cairns:

[T]hey were told to use one of their number as a 'ruler.' Smoot was chosen for the job because he was the shortest — which would make the task longer and more arduous — and because he had the silliest name, which was already [thought of as sounding a bit like] an obscure unit of some sort anyway.

The measurement was done by getting Smoot to lie down, marking his height with chalk and paint, then getting him to stand up, move one length further along and get down again, and again, and again. For a while, Smoot did it under his own steam but after a hundred or so times he became tired and his companions ended up simply dragging him from one space to the next.

In this way, it was determined that the bridge was 364.4 smooots long "plus epsilon," although this was later recorded as 364.4 smoots plus an ear.

And so the "smoot" was born. A smoot is the length of one 18 year old Oliver R. Smoot — which translates to five feet seven inches, exactly. Which means, if you want to measure things in smoot-lengths, using the Google calculator (with help from my partner on this blog, the artist/animator/arithmetician Benjamin Arthur), an adult Apatosaurus from head to tail in smoot units, would work out to ... 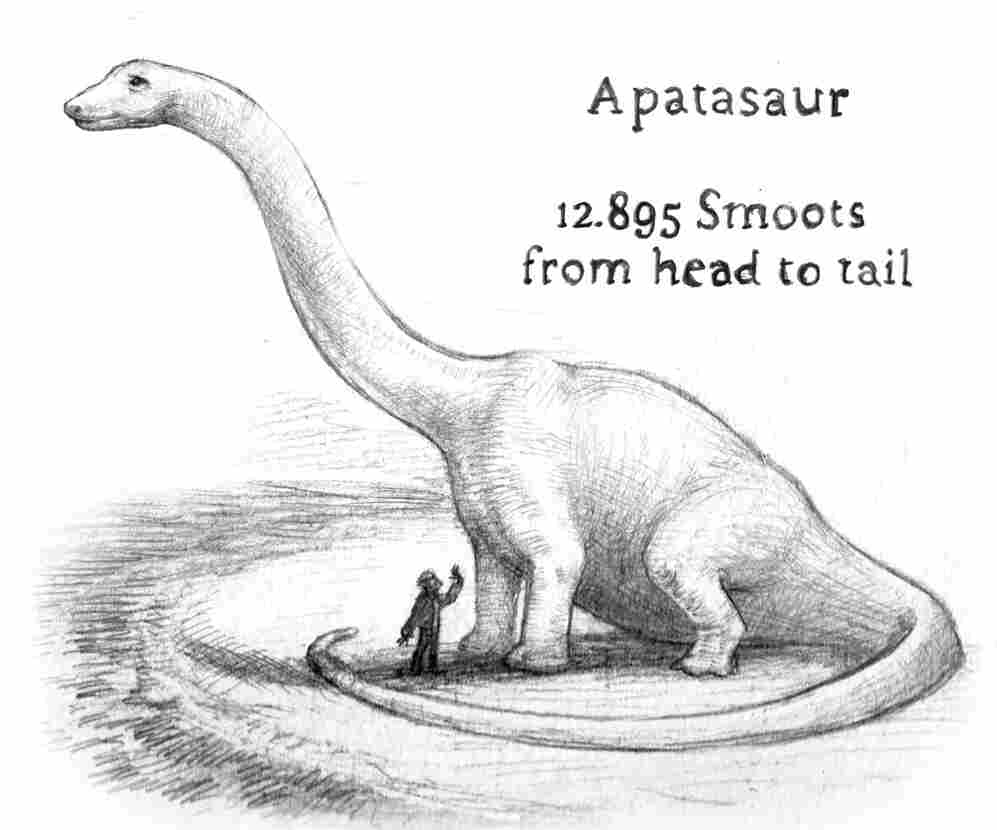 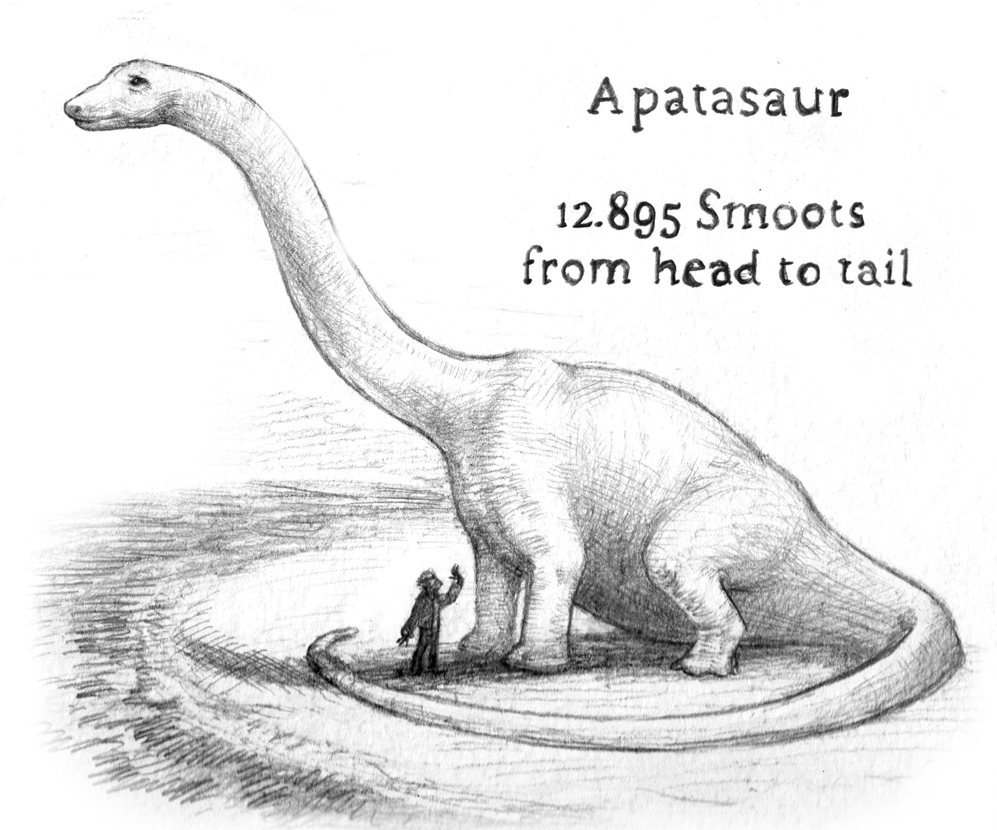 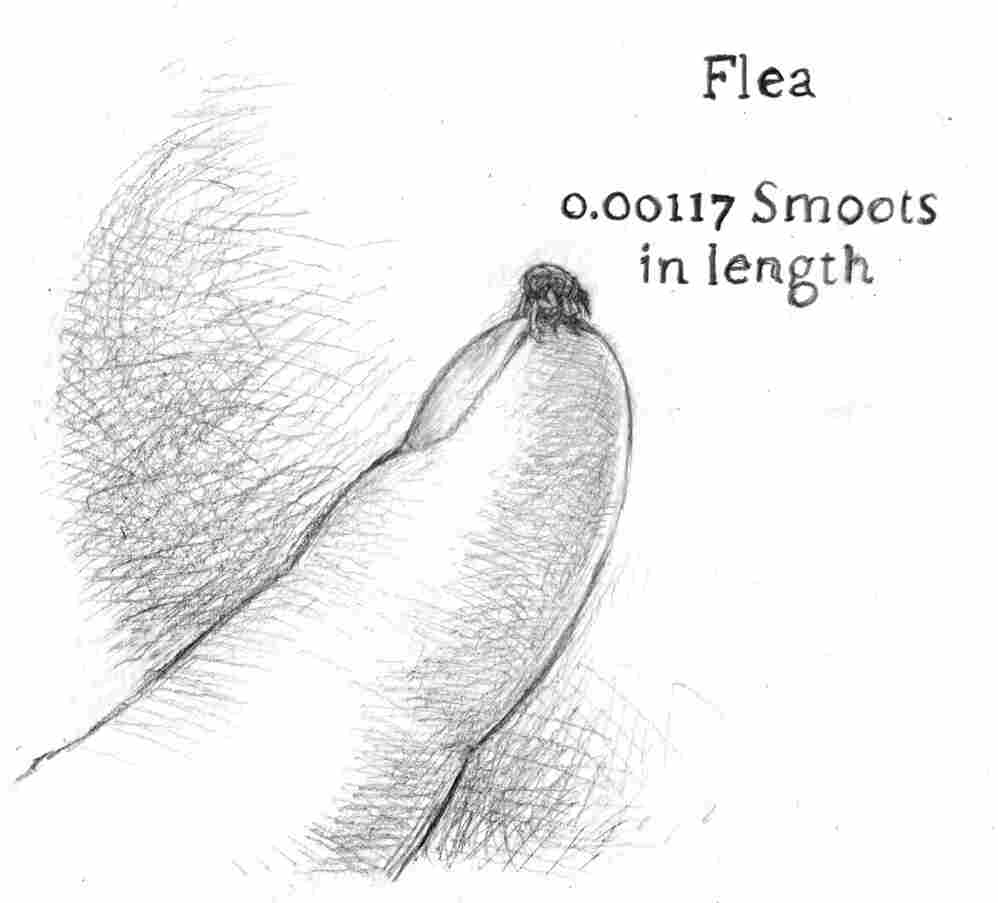 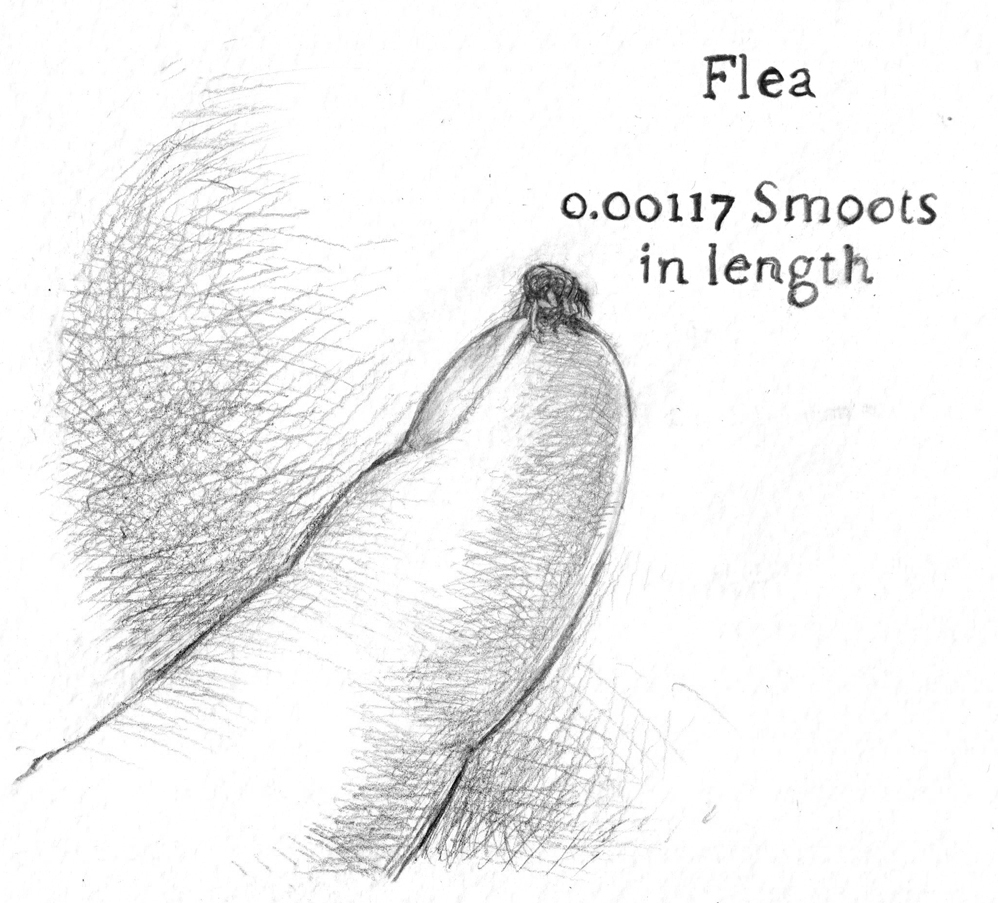 It has taken a half century for the Smoot to become a smoot. For some reason the Cambridge, Massachusetts police department did not erase the 364 painted marks on the Harvard Bridge back in 1958. The next year, Lambda Chi pledges repainted the same marks, and again, the police and the Highway Department looked the other way. Revandalizing the bridge became an annual practice until 1987. That was a watershed year, says Warwick Cairns:

In 1987, the Massachusetts Department of Public Works decided that the bridge needed renovations and resurfacing, and this meant removing all the smoot markings. This caused something of a commotion locally, and the press contacted Oliver Smoot, who [was] executive Vice President of the Computer and Business Equipment Manufacturers Association in Washington DC, to ask whether he would be prepared to be re-used for new markings, should the need arise. He was less than sure that he would.

Meantime the Massachusetts Metropolitan District Commission (the folks in charge of the bridge) went on record in support of smoots.

"We recognize the smoots' role in local history. That's not to mean that the agency encourages graffiti painting. But smoots aren't just any kind of graffiti. They're smoots!"

[And so...] the Continental Construction Company of Cambridge paved the bridge with slabs that were five foot seven inches long (smoot length) instead of the usual six foot increments. Annual smoot painting continues to this day.

Everyone at MIT knows about smoots. When they graduate, it appears they slip smoots into new places. I don't know this, but I'm guessing that Google has a cluster of MIT moles who've introduced the smoot to Google Earth. It's only a matter of time before the rest of us start matter-of-factly smooting. I can imagine the "forestry" smoot. 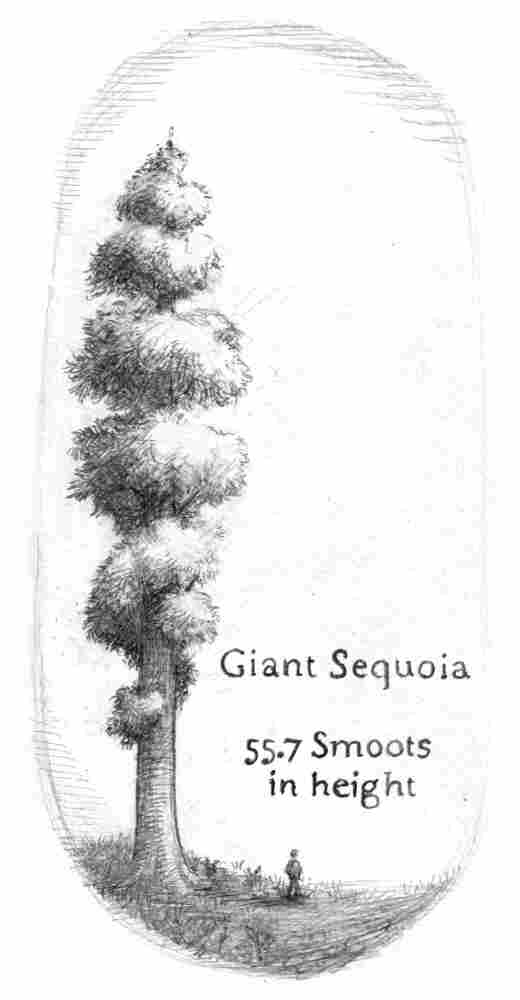 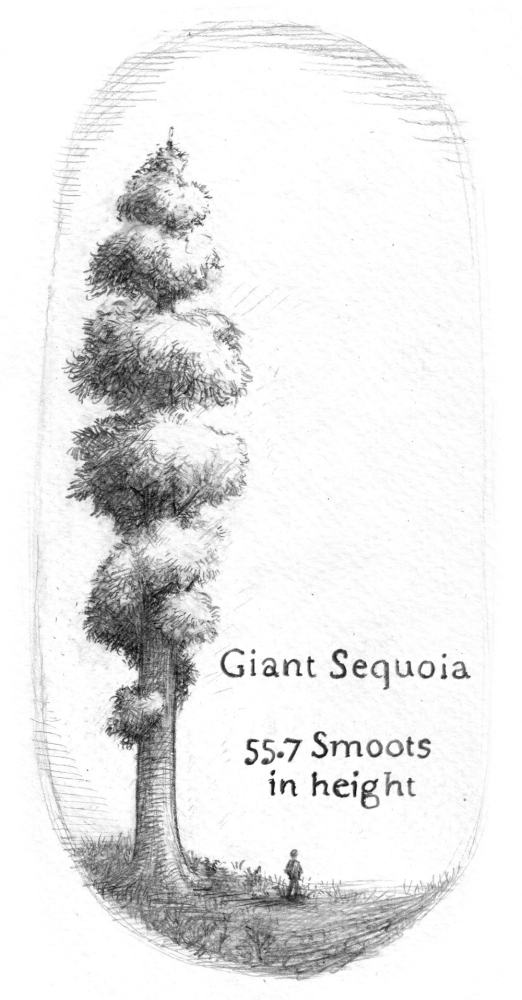 Or a farmer at the state fair proudly advertising his prize chicken's high smoot count ... 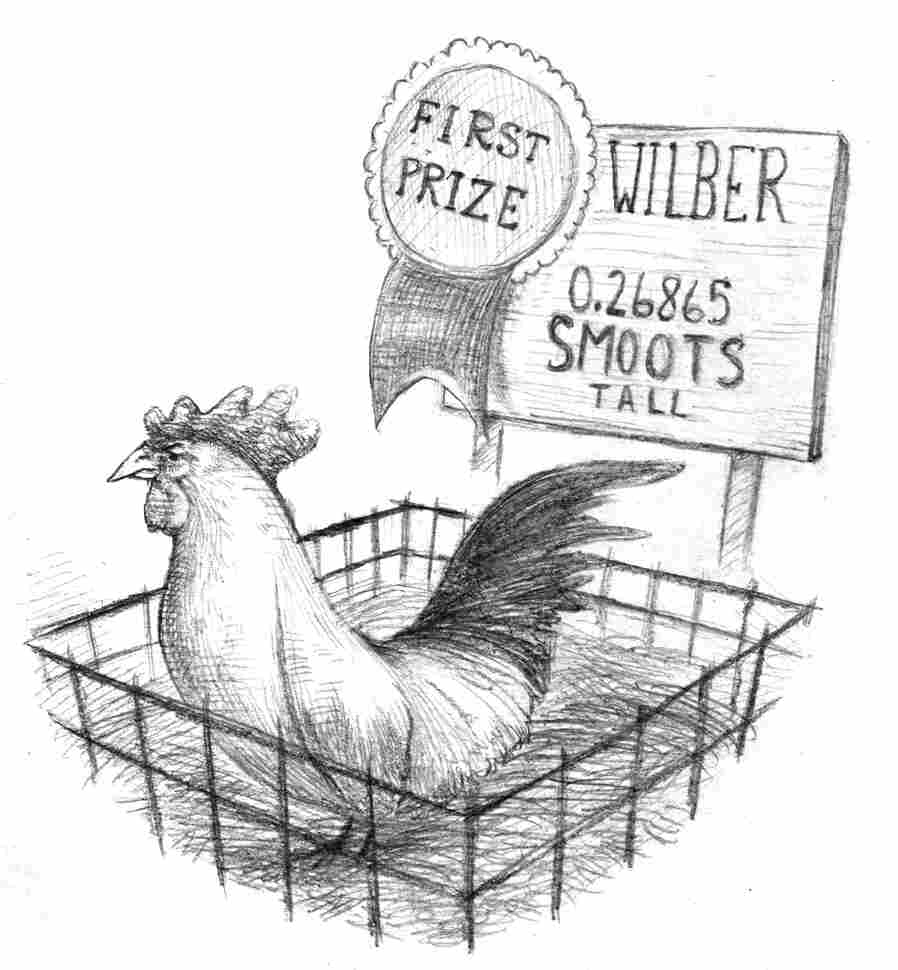 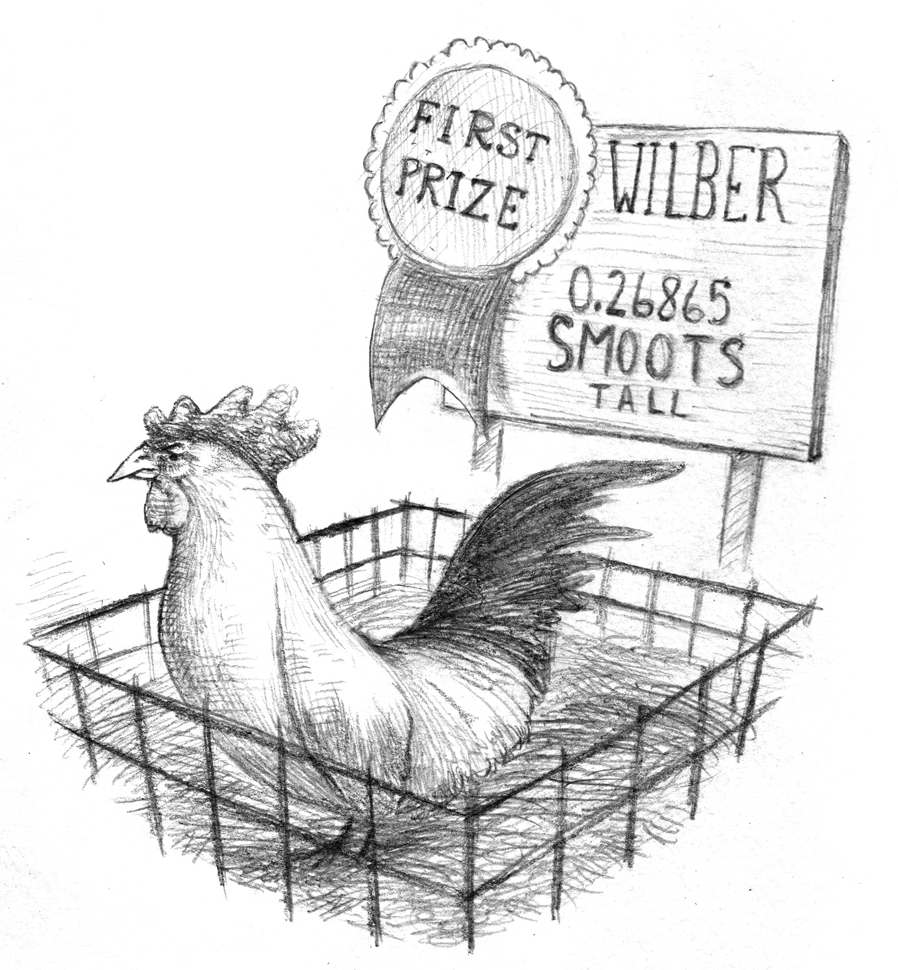 There have been a couple of attempts to "modernize" the smoot by retrofitting it to match more recent Smoots, Steve (Oliver's son), MIT class of '90, and Sherry (Oliver's daughter) MIT '99, but purists quickly put an end to that. As for Oliver, he lives on — though many MIT-ers assume that like Watt, Celsius, Curie, and Mach, he's dead. He isn't. In fact, he recently retired from the board of the American National Standards Institute, a group that helps set standards in industries across America. Mr. Smoot doesn't have to do that anymore. He is a standard.

Benjamin Arthur is a regular contributor to this blog. Together, we've made videos about why people keep walking in circles, and how billions of invisible insects fly over our heads on clear, warm days; he's drawn hobbit people being chased by giant storks, chemists dissolving golden Nobel prize medals, and multiple portraits of a 17th century mouse who wrote poems about cruelty to animals. If you'd like to hear a conversation with Oliver Smoot, he was on All Things Considered a few years back when he retired from his American National Standards Institute job. And special thanks to Ashwin Seshagiri for alerting me to my first smoot.