That's my nephew Allen with the shy smile in the foreground. And that's you-know-who in the back. 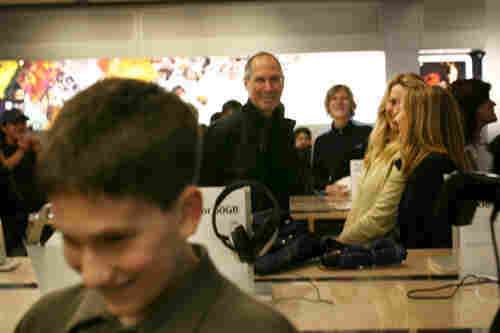 And this moment here, when he got to shake the Man's hand, this, he says, is "probably the high point of my childhood"... 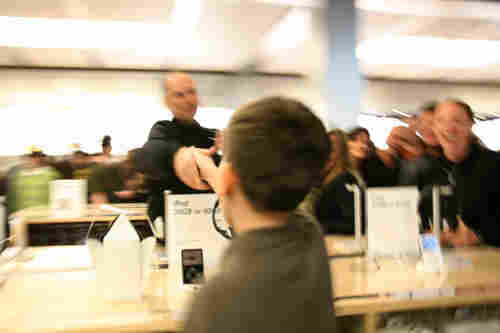 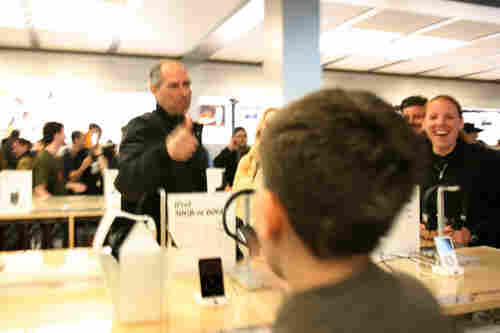 Allen, who is now 18, was an unabashed Apple fanboy. His love for Apple products, Apple software, Apple design, Apple lore, Apple anything was so fierce, so deep in him, that he didn't always behave like normal person, which is how he got himself invited to New York's Apple store a few years ago; to my sister's distress (she took these pictures, but she's a photographer, she takes pictures of everything), he carved the Apple logo onto his head. I don't completely understand this kind of obsession...

But Steve approved. So Allen glowed. (While my sister wondered.) But I think we all know why Jobs has such a powerful effect on the people who came of age with his products. An iPod, a Mac, an iPad, are so comfortable to use, are such a snug extension of our moods and our bodies that they attach to us. So we, of course, we become attached to them. 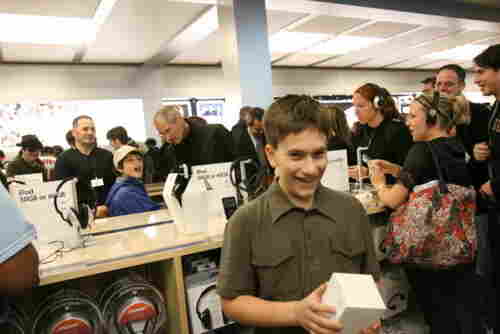 That's the reason, says my fellow blogger Callie Neylan, over at All Tech Considered, why her friend Supisa, "carr[ies] her Macbook around with her everywhere, like a newborn baby, [and] refuses to leave the house without it." And that's why Callie admits she always sleeps with an iPhone under her pillow. That's why Allen, when he was really small, spent his Halloween dressed as a Mac. 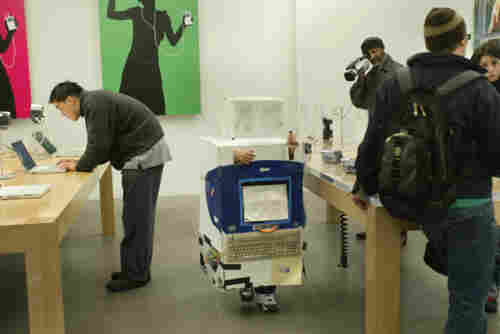 And that's why when the man who inspired these things, these things that have become intimate extensions of ourselves, suddenly made his exit this week, everybody noticed. The gadgets may be in our pockets, in our hands, but they feel like they are part of our nervous system, which keeps getting newer, better wires from Steve, and we all thought he would give us more.

But now, with him suddenly missing, there's an absence, like a promise that can't be kept.

For those who wish to share remembrances of Steve Jobs, Jason Kottke's site is rich with material. My favorite is this one. It's a version of the celebrated "Think Different" commercials, narrated by Jobs himself, which is fitting, because he was one of the very few people in recent times who belongs in the company of these giants. Jason says it never aired on TV.