Accessibility links
Two Plates. One Herbivore. One Omnivore. Which Is Which? : Krulwich Wonders... One night, somewhere where they won't say where, a food anarchist named Mike Lee got 40 people to perform a daring experiment in food camouflage.

Two Plates. One Herbivore. One Omnivore. Which Is Which?

Two Plates. One Herbivore. One Omnivore. Which Is Which?

One night, somewhere, they won't say where, but I'm guessing it was a Manhattan loft with a big kitchen, a food anarchist named Mike Lee got 40 people to perform a daring experiment in food camouflage. 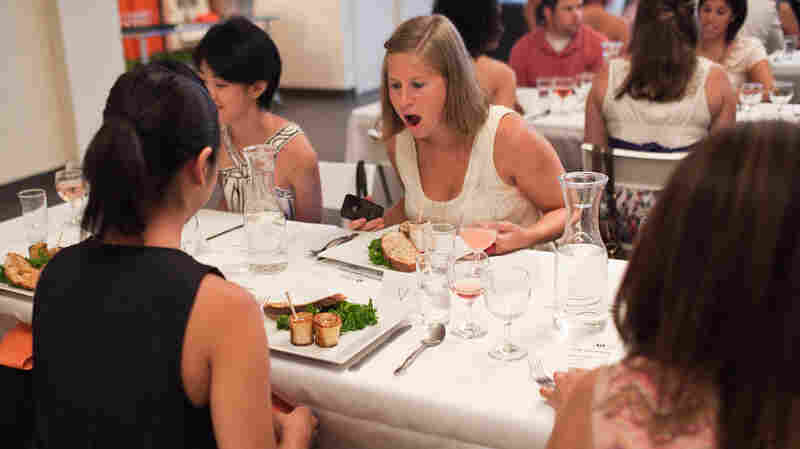 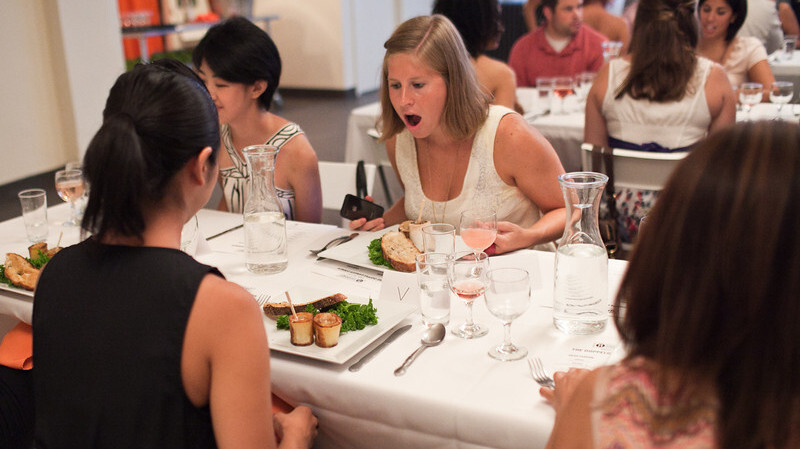 Everybody sat down to what looked like the same meal. But it wasn't the same. Here's the first course. Half the diners got a spherified apricot puree in a coconut soup with mint. On the other half, salmon roe in Vichyssoise. One recipe for meat eaters. One for vegetarians. Very different ingredients. Yet at first glance they look almost identical, no? 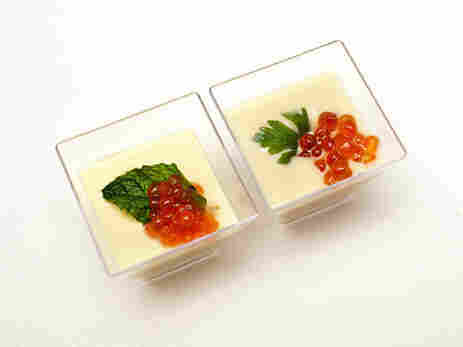 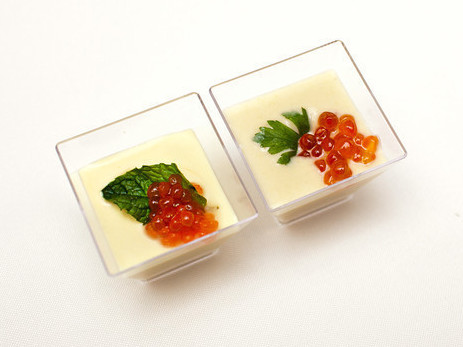 This was Mike's notion. He knows couples where one person's a vegetarian, the other a meat eater. "It seemed like they could really never share a meal and have the same experience without one person — usually the omnivore — compromising to suit the mutually agreeable meal."

Yeah, well, that's what you get for dating a vegan, I say. But not Mike. He and his foodie friends run a much talked about "underground" dinner club called Studiofeast. Every month or so, they pop up in a new place and do something astonishing with food. Last summer, they created a seven course meal for 20 vegetarians and 20 ominivores. The plates looked the same, but the vegetarians got veggies and the flesh eaters got flesh. And, thanks to the chefs, you could barely tell. That's Mike's way of easing the pain of first (second and third) dates, or maybe he's just into World Peace.

So here's how it's done: The second course are twin tartares. For vegetarians, a spherified yellow pepper puree on tomato with a smudge of basil puree. For omnivores, smoked egg with beef and parsley. I'm not telling which is which. 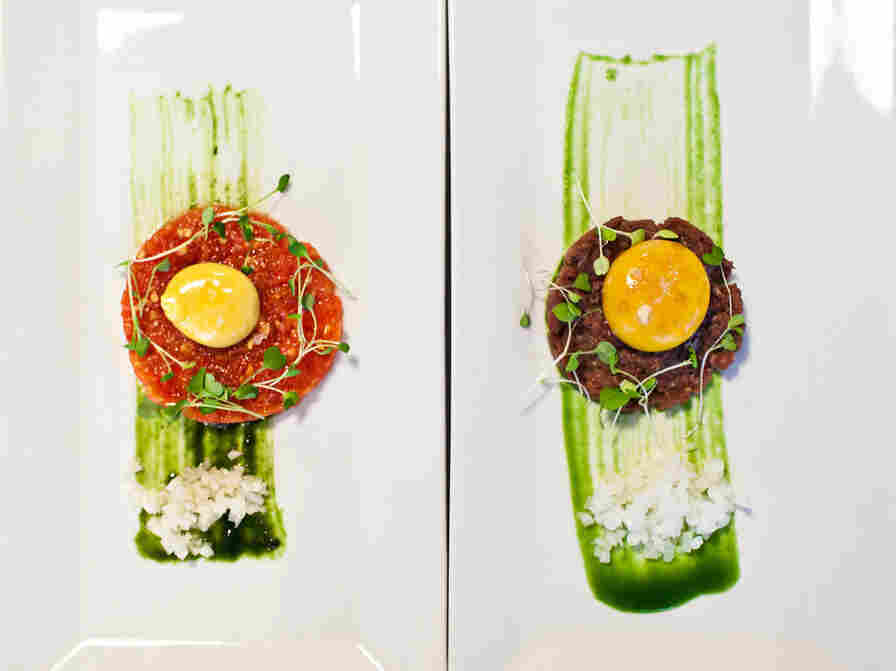 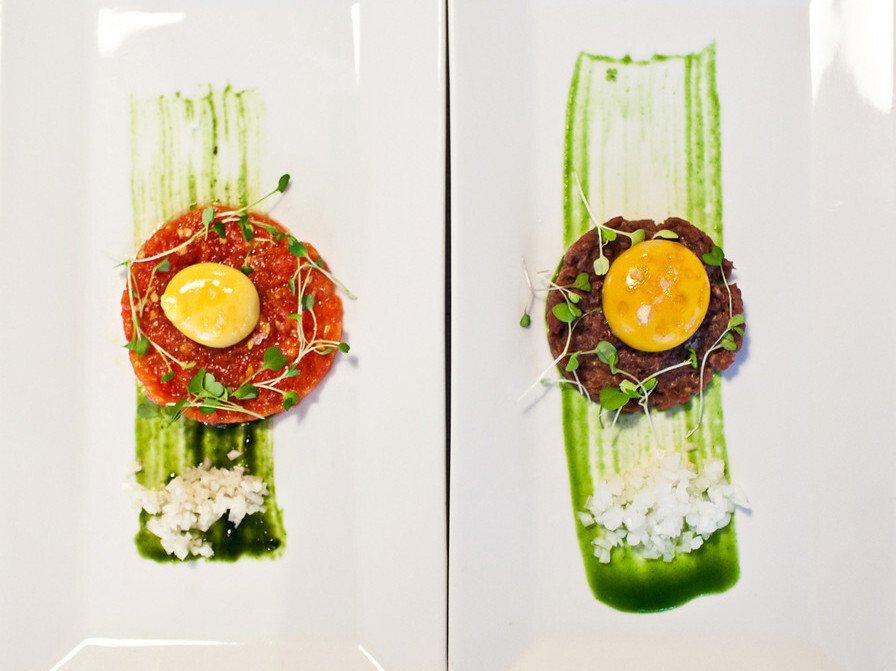 Next, marrow on toast. For the vegetarians: 45 hand-carved Yukon gold potatoes filled with caramelized onions and miso butter. For the omnivores: real beef bones, with duck fat. 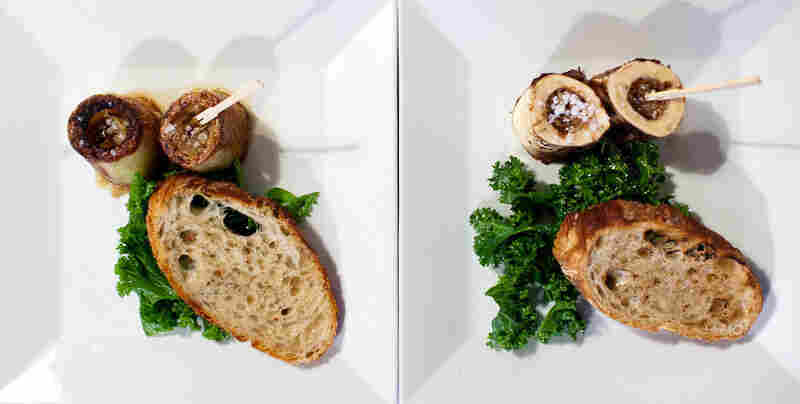 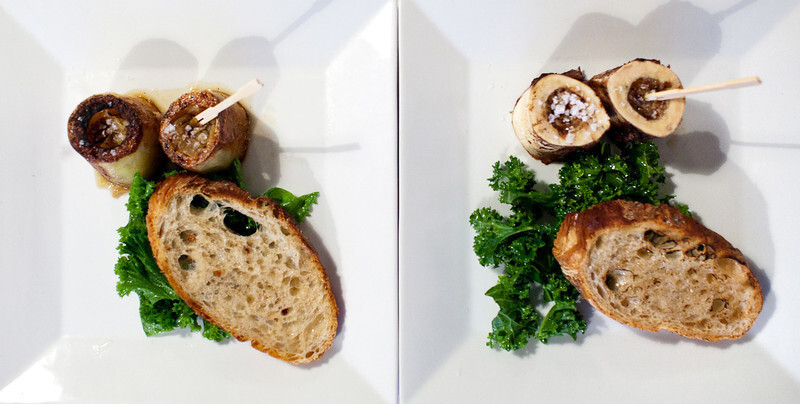 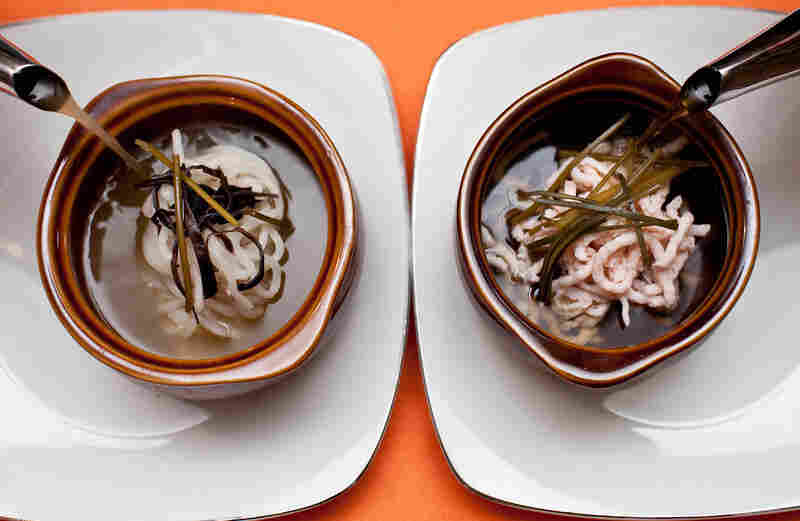 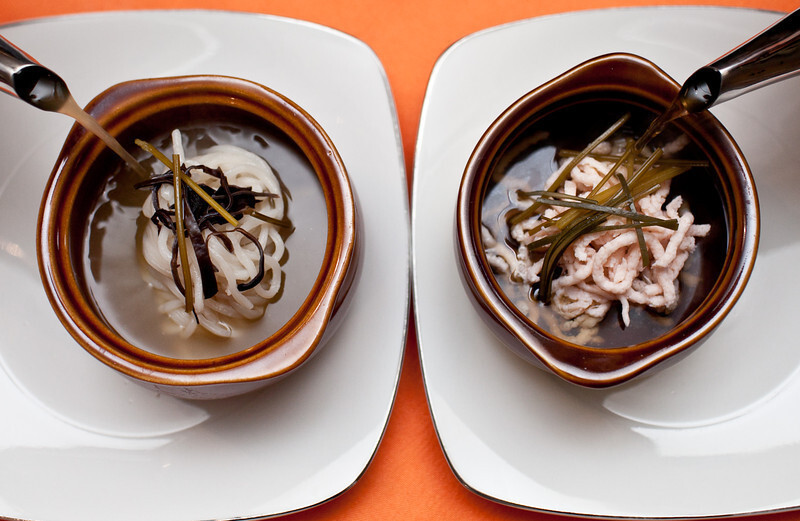 The "meat" course. For those who can, duck breasts served with celery and sweet potato. For those who won't: watermelon, compressed, cooked sous-vide and grilled, with fennel and carrot. 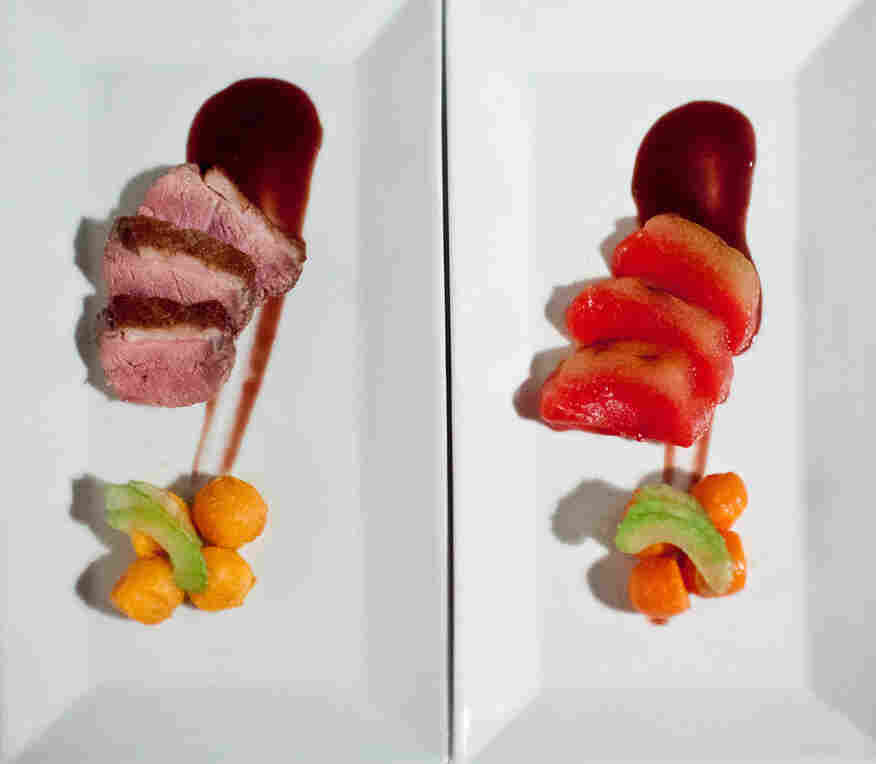 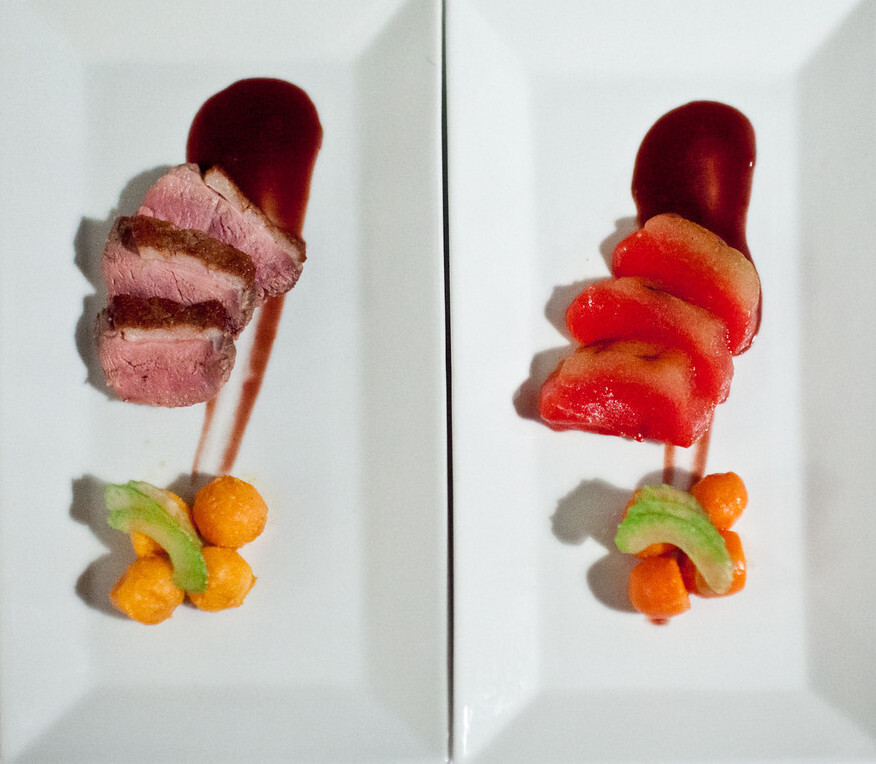 Next course? Vegetarians were served carved tofu-cylinders with green beans and kimchee. The omnivores? Sea scallops with garlic scape and red pepper.

Before we serve dessert, let me point out how hard this was to do. For one thing, according to Nicola Twilley whose blog Edible Geography I trust for its foodie knowledge, none of the vegetarian dishes used The Usual Lookalike Substitutes. No "Quorn". No "Tofurky". No "Texturized Vegetable Protein". Chefs had to invent their own doubles with no help from the "I Cant Believe It's Not Meat" industry.

Then, to make things even harder, Mike and his co-chefs decided not to use the same ingredients in their look-alike dishes. Says Mike to Nicky: "If we used basil puree in the veggie dish, then we had to use parsley puree in the meat dish." Nicky sums up:

In other words, for each course, Lee composed a dish, and then used completely different ingredients to assemble its equally delicious visual analogue. This is cookery as the counterfeiter's art.

Vive la difference! Disguise la difference! Only crazy obsessives do stuff like this, so it's a double pleasure to know there are people who are even better than I am at wasting time. I say "better" because in their Behind the Scenes video, it seems Mike and friends seem to be having a very good time.

We're almost done. I know you're fat, full and getting sleepy, but do you have room for chef Micah Phillips' last course: uni, lobster, corn and licorice for the omnivores; blueberry, frikeh (I had to look this up. It's a kind of wheat), woodruff and birch for the vegetarians? 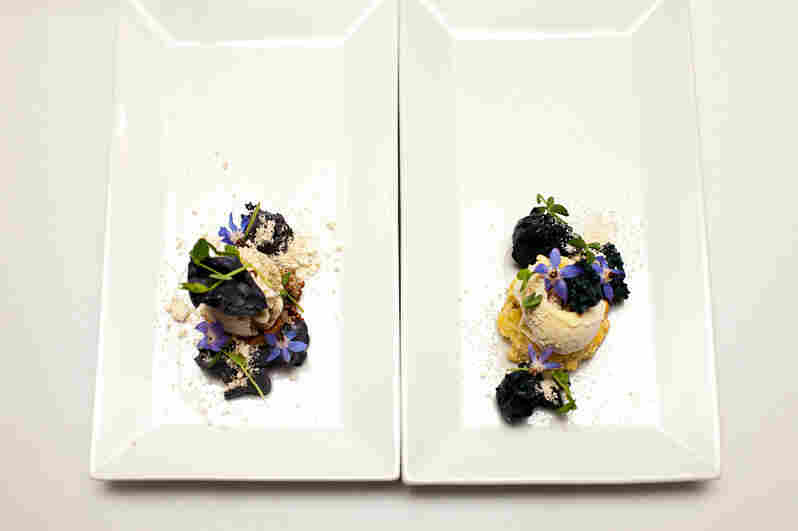 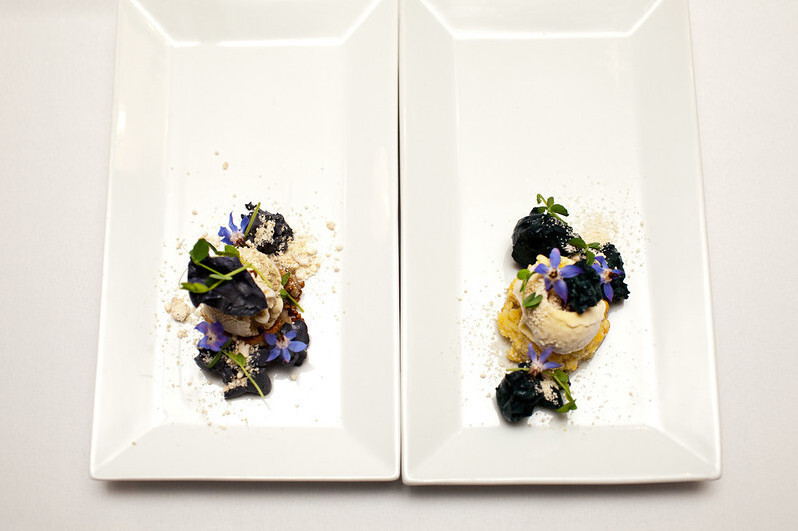 I'm getting under a blanket of alocasia leaves (oven warmed for 28 minutes at 85-90 degrees, with cloves of cinnamon added) cleverly disguised as a four poster bed.