Accessibility links
Who Left A Tree, Then A Coffin In The Library? : Krulwich Wonders... It began with a "poetree" — an ornately-crafted paper sculpture left in the Scottish Poetry Library in Edinburgh. Next was a paper dragon. Who was leaving these cryptic messages around town?

Who Left A Tree, Then A Coffin In The Library?

Who Left A Tree, Then A Coffin In The Library?

Update: The Library Phantom Returns! See Part 2 of the mystery.

It started suddenly. Without warning.

Last spring, Julie Johnstone, a librarian at the Scottish Poetry Library in Edinburgh, was wandering through a reading room when she saw, sitting alone on a random table, a little tree.

It was made of twisted paper and was mounted on a book. 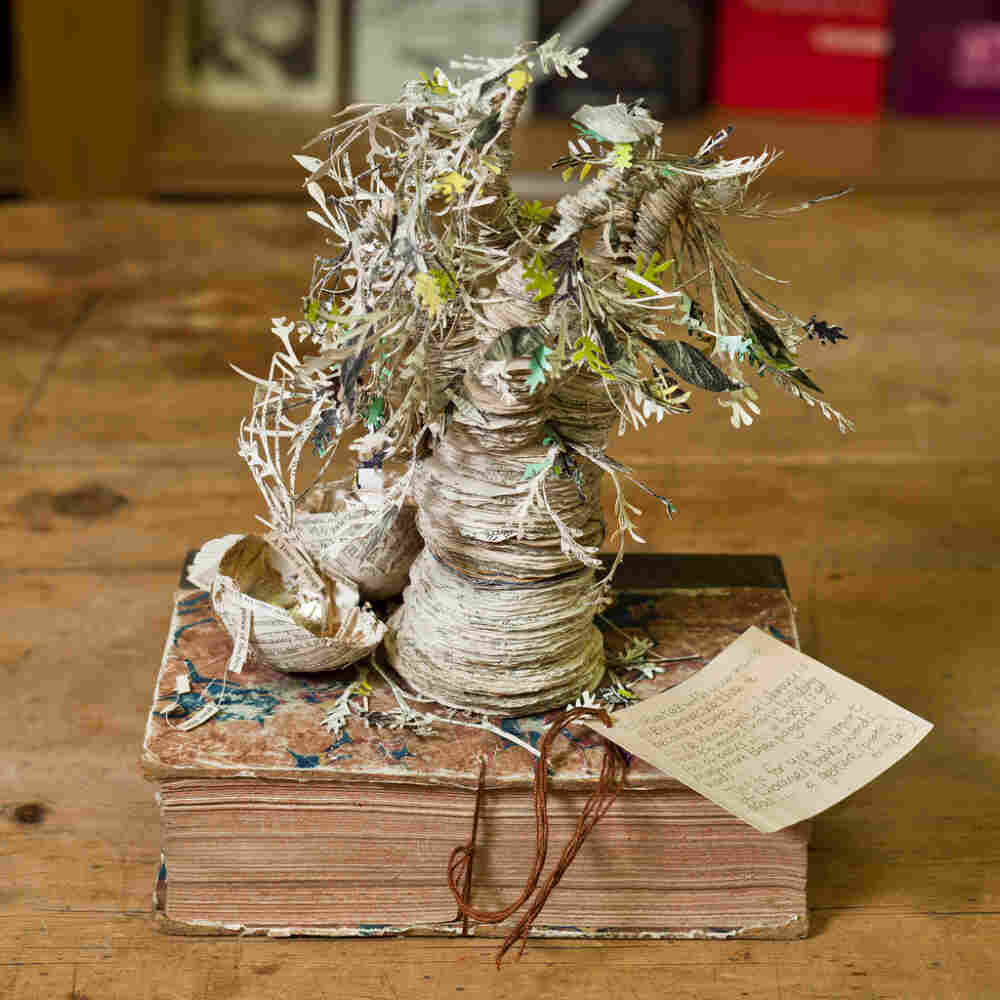 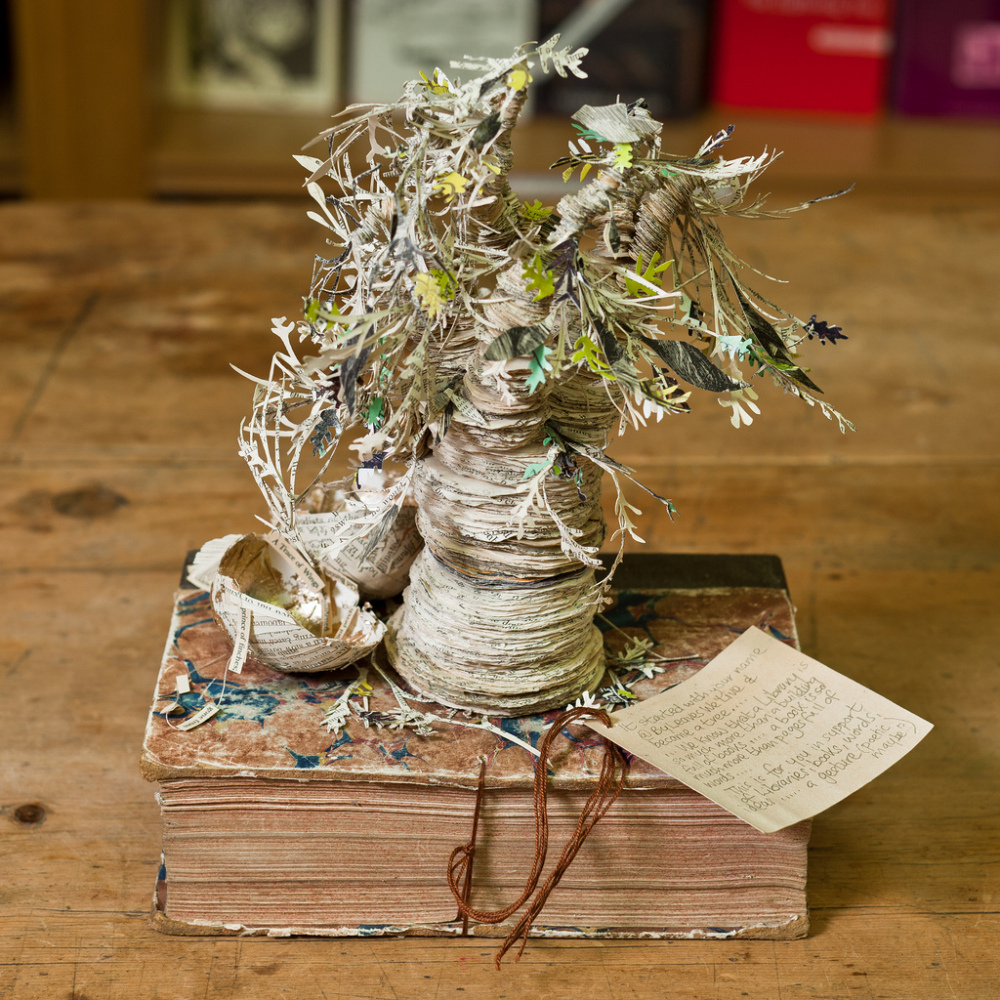 Gorgeously crafted, it came with a gold-leafed eggshell broken in two, each half filled with little strips of paper with phrases on them. When reassembled properly, the strips became a poem about birds, "A Trace of Wings" by Edwin Morgan. 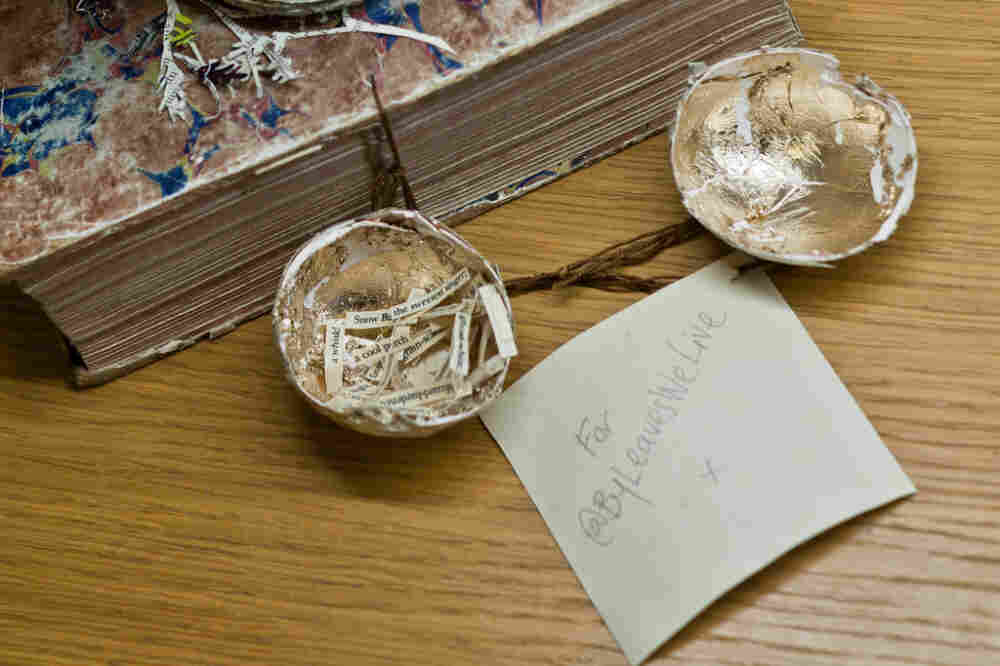 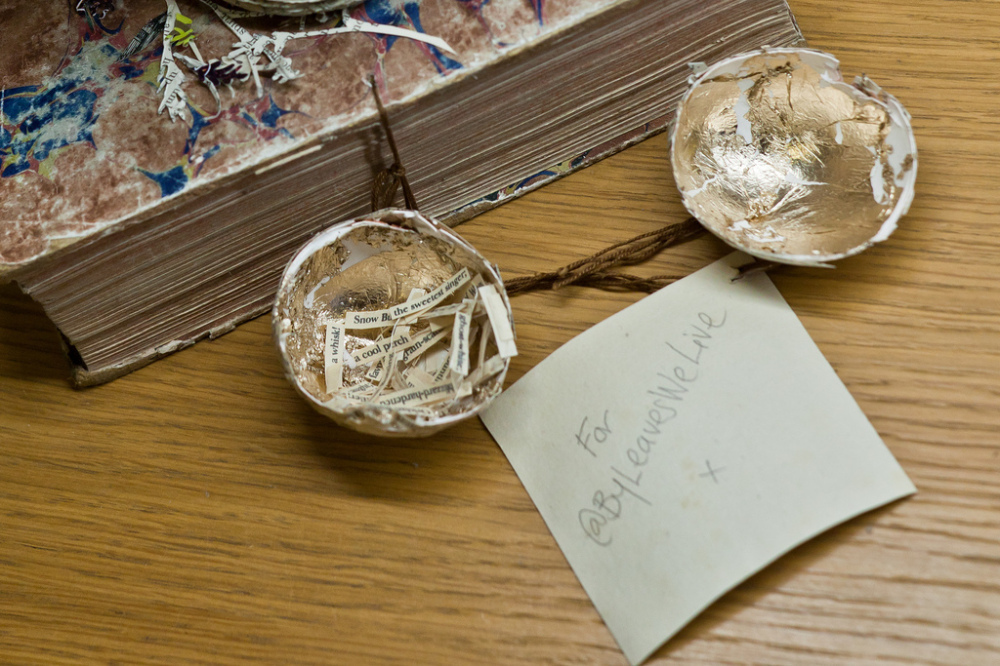 "This is for you in support of libraries, books, words, ideas..." said a note, addressed to the Library by its twitter name "@ByLeavesWeLive". There was no artist signature, no one to thank. The staff, totally nonplussed, asked on their blog if anybody knew who made it. They described the gift as a "poetree" and waited. Nobody claimed authorship.

Then, it happened again

This time, a coffin, topped by a large gramophone showed up suddenly at The National Library of Scotland. The scene was carved from a book, a mystery novel by Ian Rankin, one of Britain's bestselling crime writers. It seemed like a visual pun, because the book's title was Exit Music. 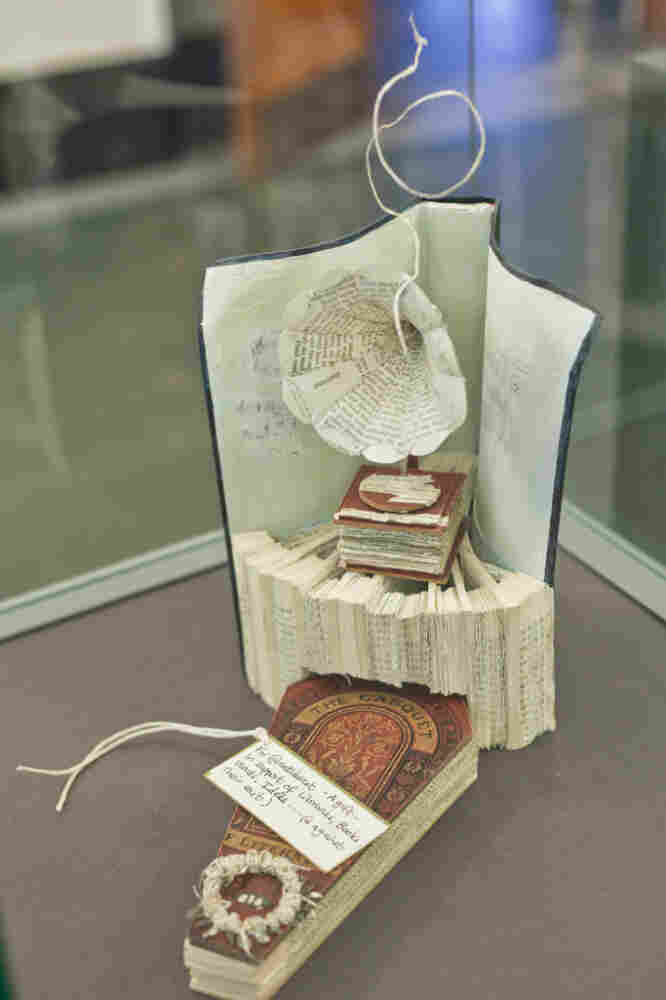 Once again, a note said, "A gift in support of libraries, books, words, ideas...(& against their exit)."

Next came a movie theater, one of Edinburgh's local art film houses. It got, out of nowhere, a book carved so that a bunch of warriors seemed to be leaping (or in some cases galloping) off a movie screen straight into a startled audience. One of the audience members, if you looked closely, was wearing a tiny photo of the face of mystery writer Ian Rankin. The mystery deepened. 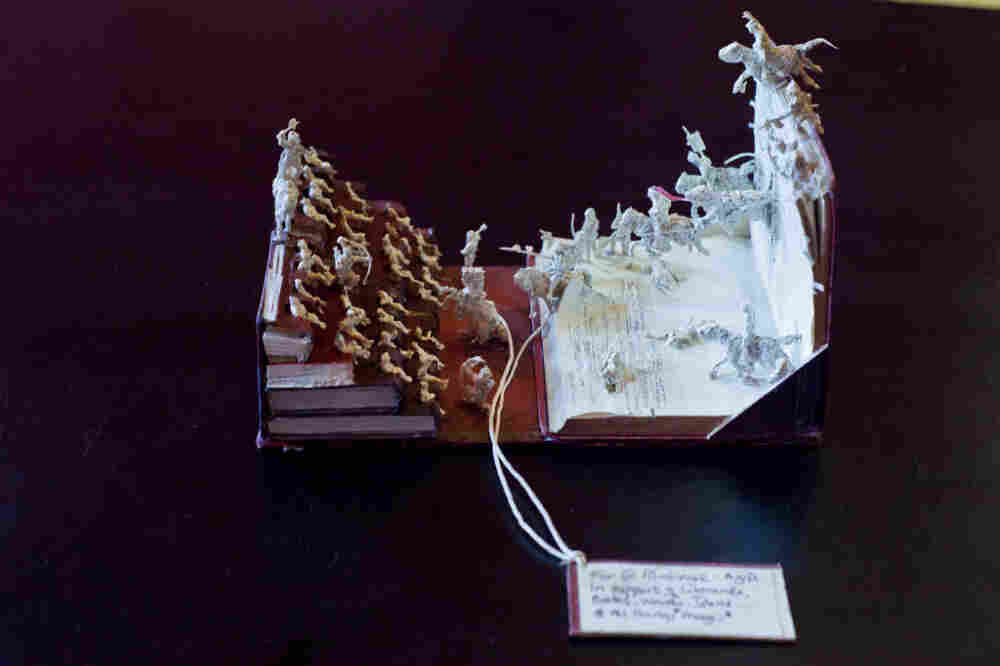 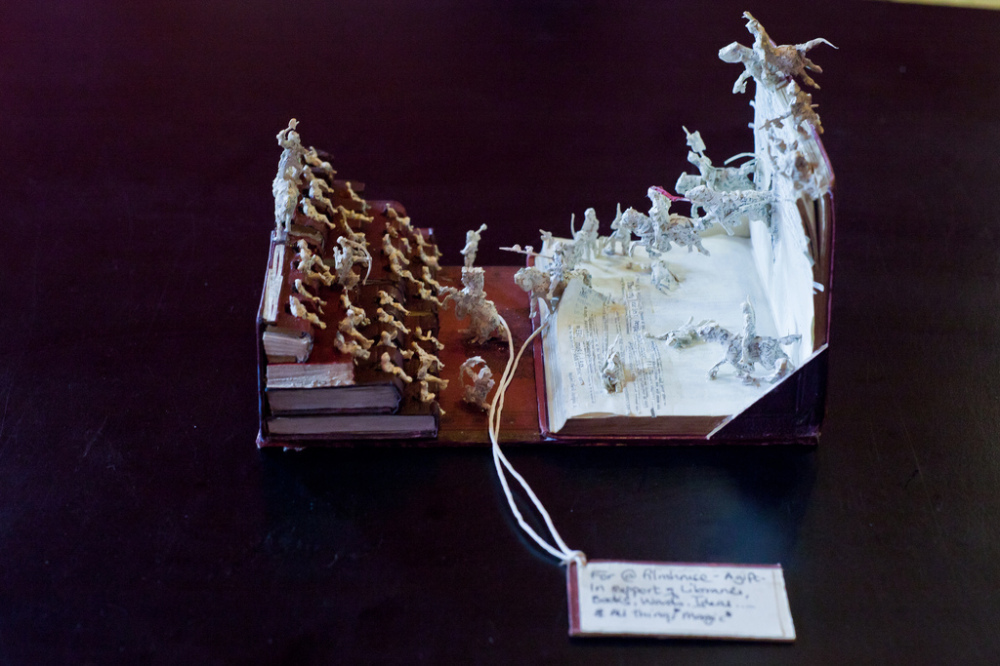 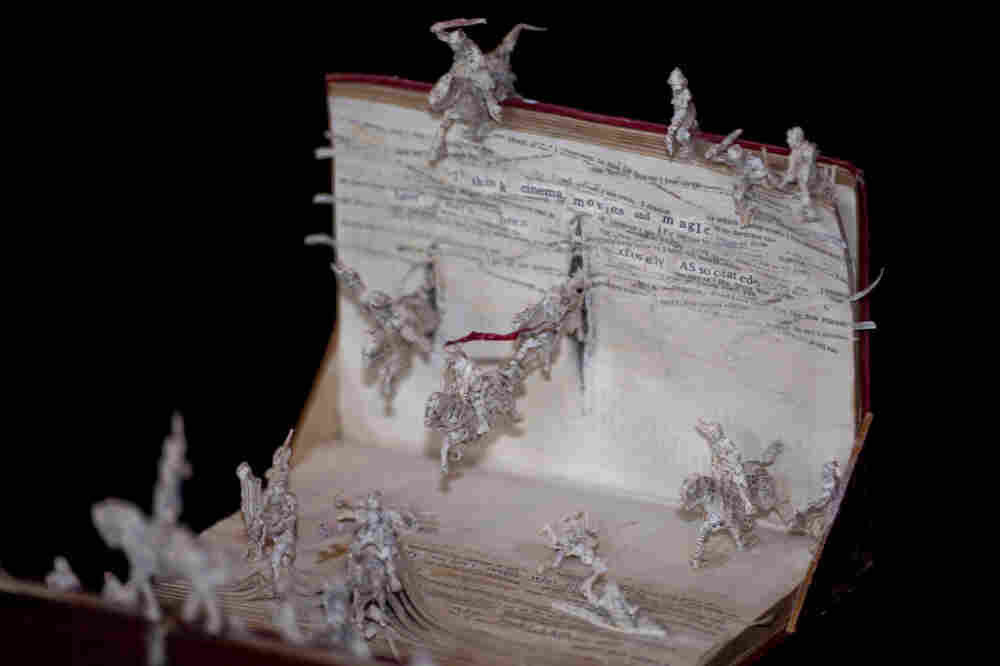 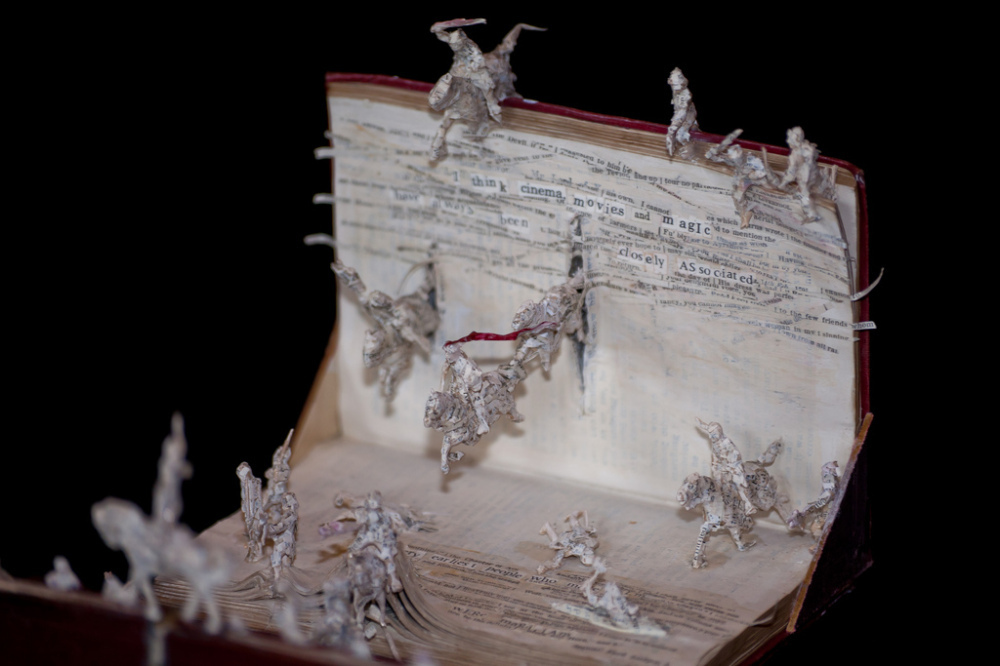 Was this Rankin's doing? His Scottish detective character, named Rebus, has been adapted for television. Perhaps the TV people were trying to gin up some publicity? A new form of viral marketing, maybe? No, said Rankin. He told the Edinburgh papers he had no idea who made these little books and he had nothing to do with it.

Next (and by now we've moved from spring into summer) somebody found a little dragon peeking out of an egg in a windowsill at The Scottish Storytelling Centre. This dragon was carved, once again, from an Ian Rankin mystery and came with the same anonymous tag:

A gift in support of libraries, books, works, ideas... Once upon a time there was a book and in the book was a nest and in the nest was an egg and in the egg was a dragon and in the dragon was a story... 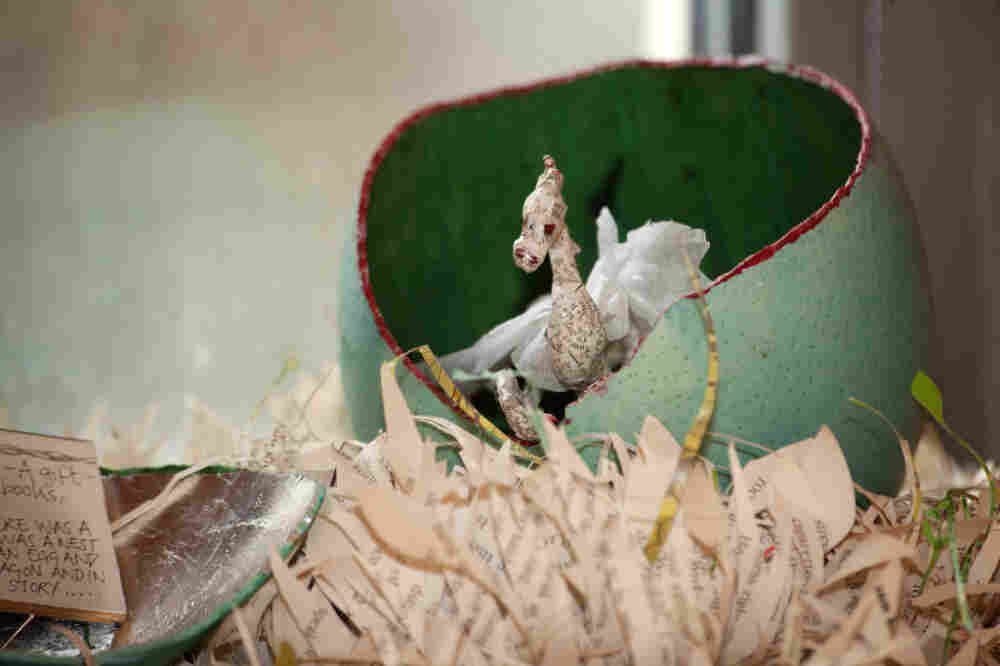 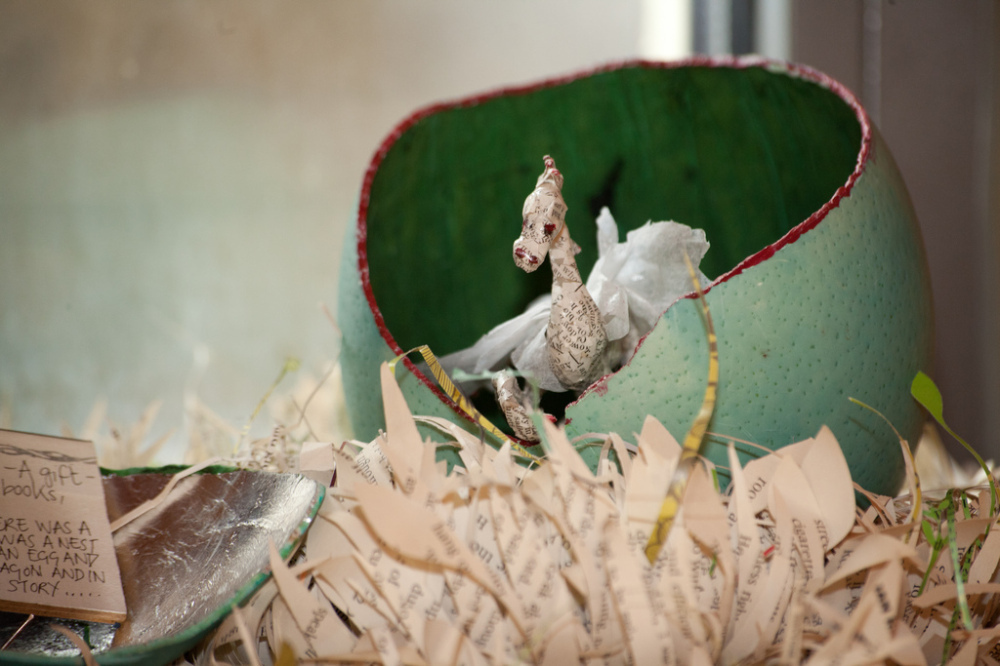 Then, the pace quickened. On a single day in August, two new sculptures showed up at the Edinburgh International Book festival, one at the Bookshop, the other at something called the UNESCO Edinburgh City of Literature. Whoever brought them in, got out unnoticed. 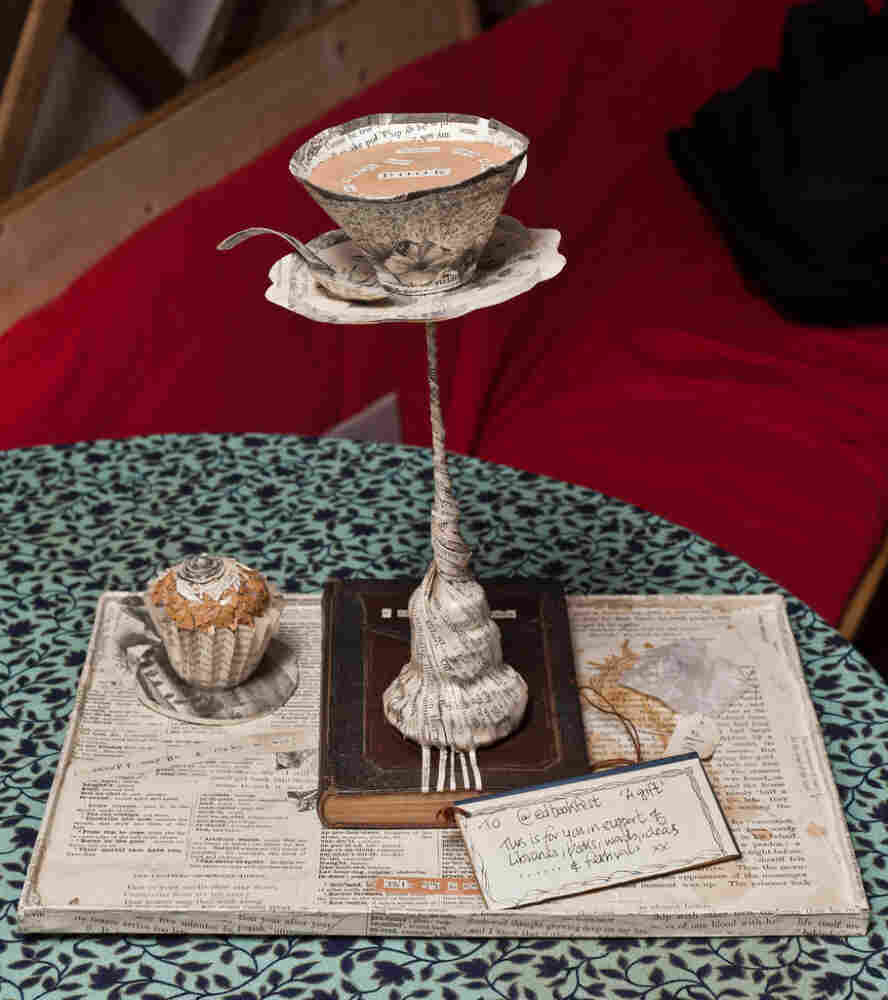 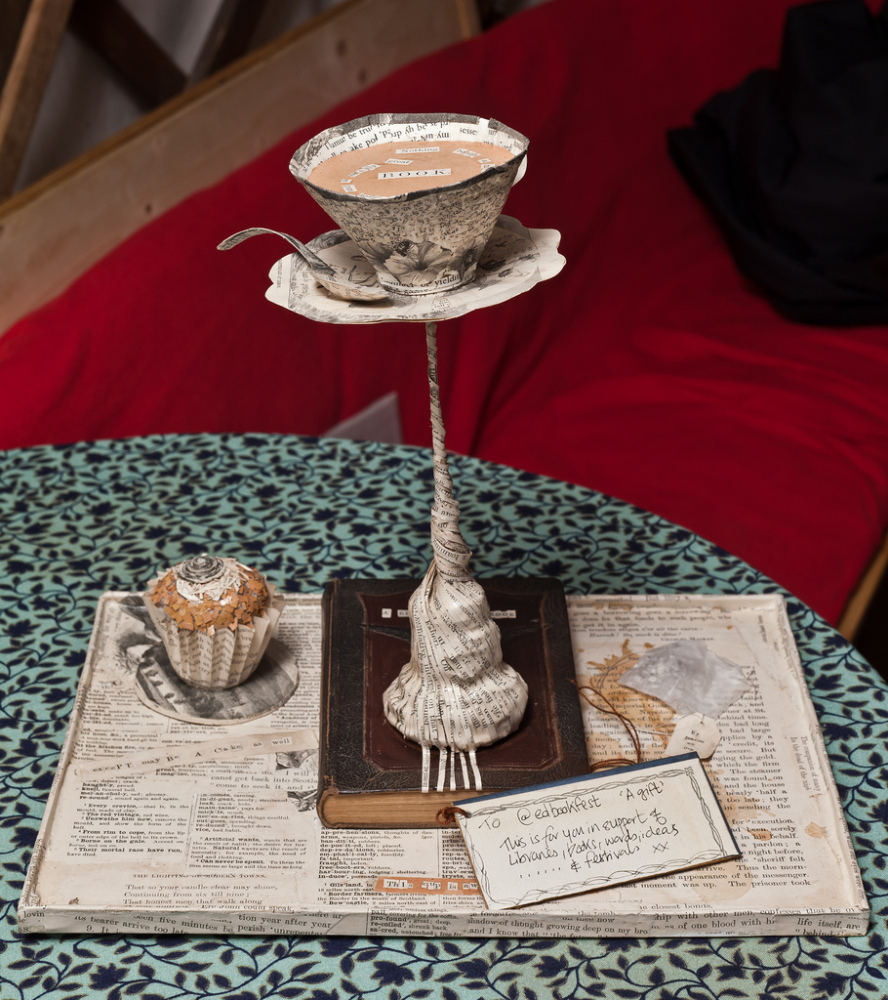 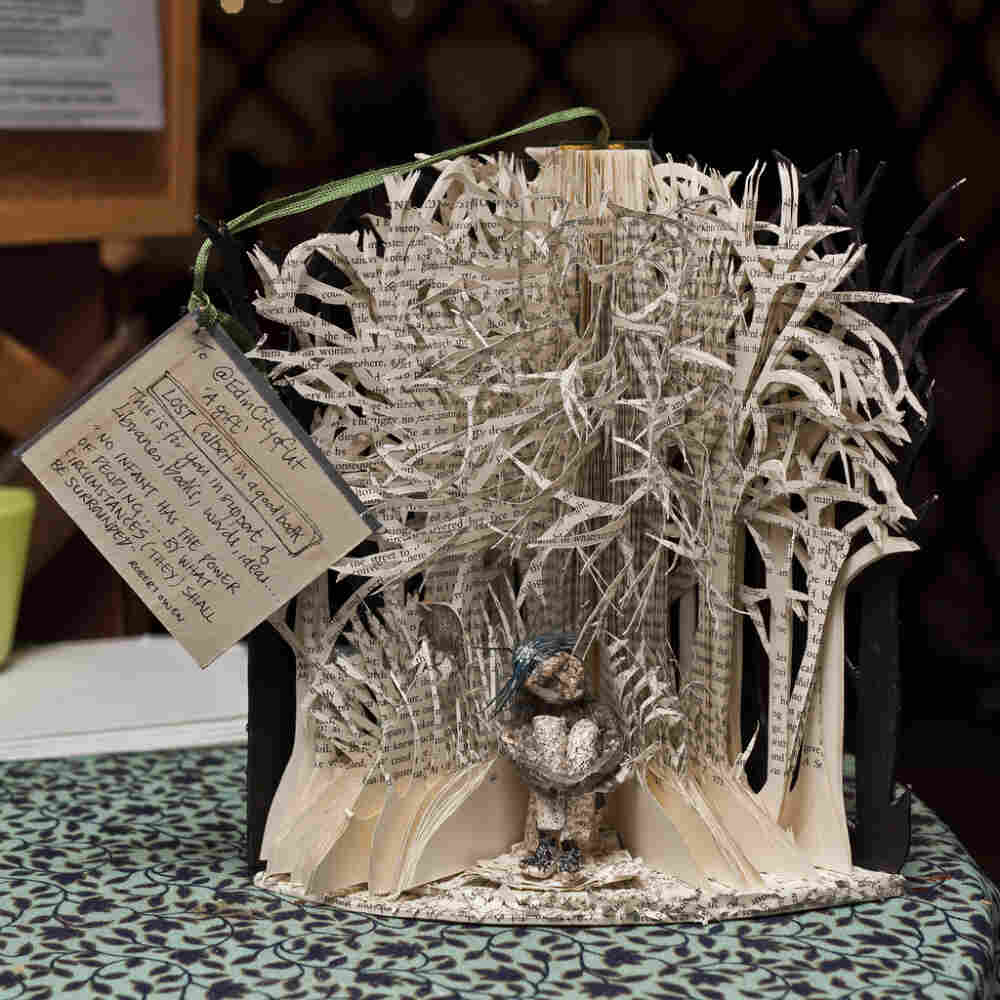 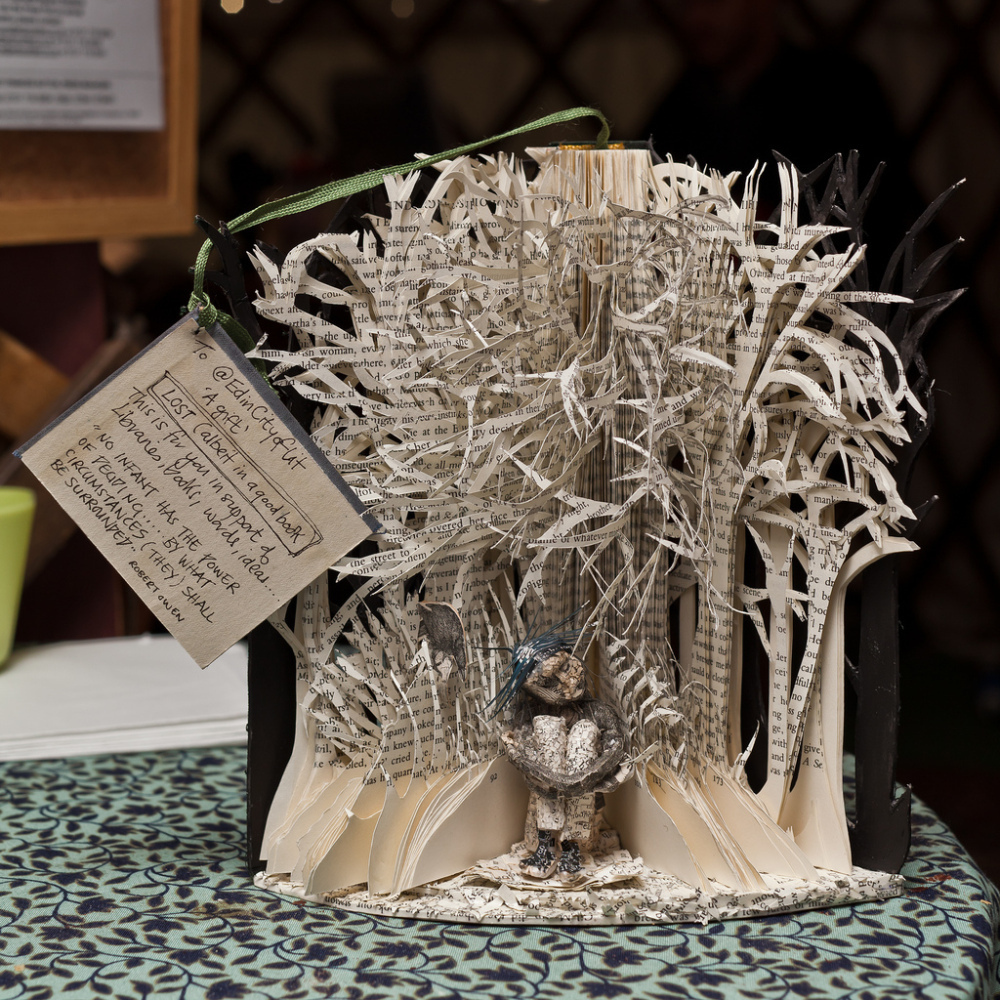 By this fall, these mysterious sculptures had become a hot story. Reporters checked the newest teacup and cupcake, then the little fellow hiding in a forest for some sign of authorship, and once again found a connection to mystery writer Ian Rankin. The hiding man was nestled in a book Rankin had publicly admired.

Mr. Rankin came to the festival, checked out the new sculpture. Here he is, trying to look innocent. The thing is: he probably is innocent. 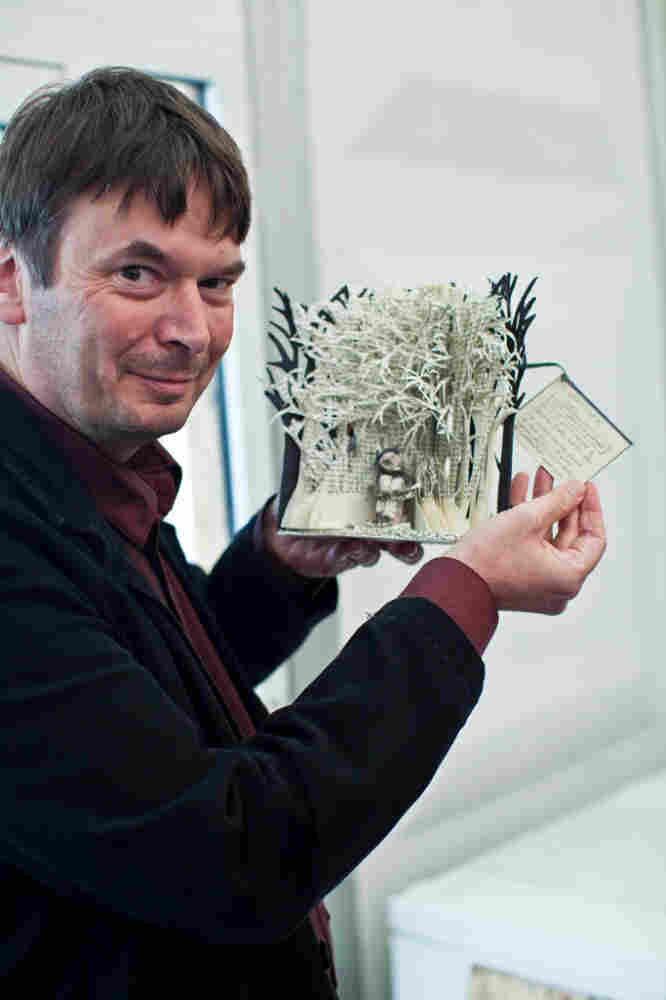 Because within a week or two, another sculpture, this one a large magnifying glass, something Sherlock Holmes might have used but in paper form, appeared at the Central Lending Library. It was balanced precariously on a book. 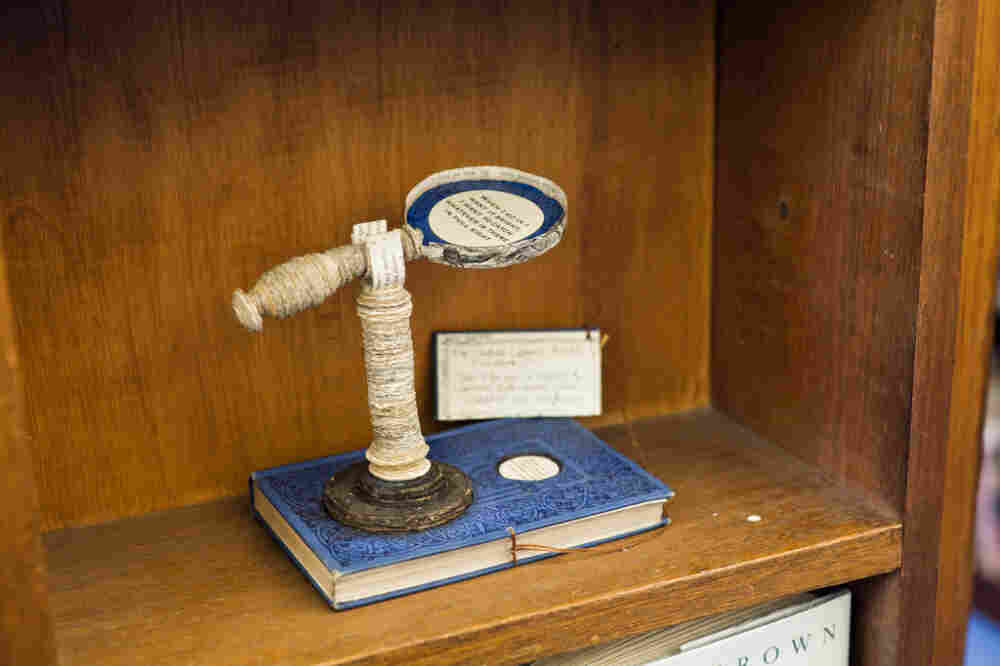 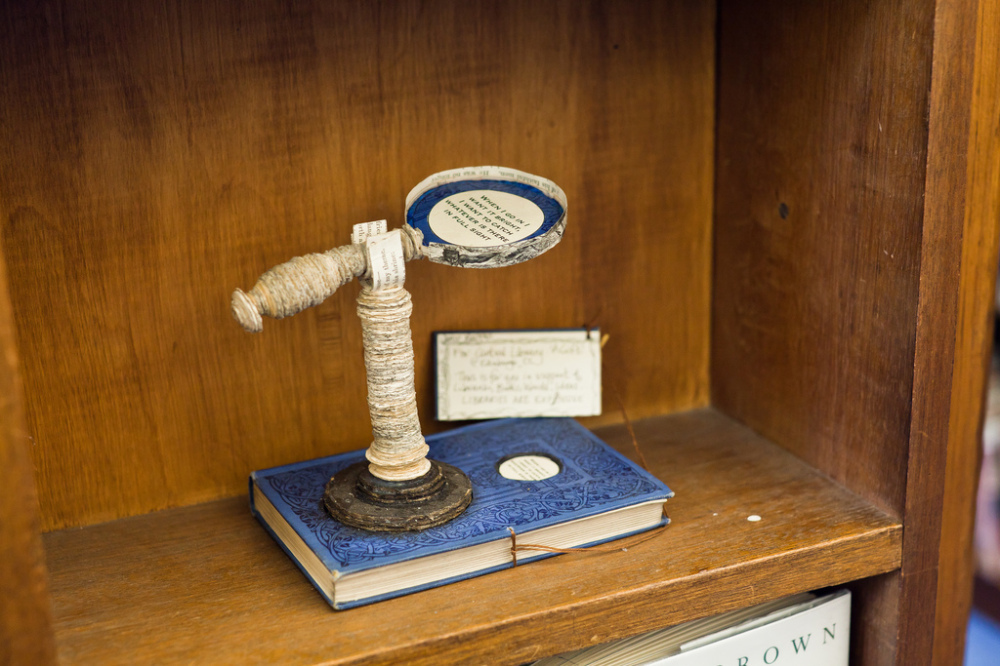 This sculpture had no known connection to Mr. Rankin, but it did quote from poet Edward Morgan — whose poem inspired the first sculpture. Hmmm. First Morgan, then Rankin, then Morgan again — who is the real perpetrator, asked the BBC, Scotland TV, The Guardian. And what is he? She? They? trying to tell us? Everyone wanted to know.

Just as the news cycle was about to hit boil, The Edinburgh Evening News announced it had cracked the case. It turns out, they said, their own former music librarian, a Mr. Garry Gale, had figured it out. Mr. Gale said when he saw the sculptures he realized they looked exactly like a paper sculpture he had bought a year or so earlier from a certain artist that he didn't name, but the styles were so unerringly similar it had to be the same artist who was dropping these little gifts on major cultural centers in Edinburgh.

Well, this is where my reporting either falls short or I bump into the respectful quiet that is Edinburgh culture. Instead of having Mr. Gale immediately identify the perpetrator, the Evening News decided to take a poll: Do you really want to know, it asked its readers, who made these gorgeous teacups and dragons and magnifying glasses, or would you rather honor the artist, and let him/her remain anonymous?

Can you even imagine such a thing in America? Can you imagine People magazine or the New York Daily News saying "Shall we protect this shy fellow's privacy?" Shall we honor his modesty?

The readers wrote in. And according to Central Station, a Scottish website, "the general view is that We Don't Want To Know." Presumably a significant number of respondents said they would rather not learn the identity of the sculptor and it would be best if those who know just not tell.

Has the paper published the perpetrator's name?

It hasn't. At least, I can't find any mention on their site. I found possible culprits mentioned, but no authoritative story. Several pages, it seems, have been un-cached and can't be read. Unbelievably (to me) that's how the story ends.

(P.S.: If you are reading this in Scotland and you know who the artist is, and want to whisper it to us on this distant continent, far across the vast Atlantic, I'm not going to tell you not to. Instead I'm going to tell you to whisper it in the comment section where we can all scroll through and find it and not mention it to each other. While not the most morally admirable of stances, this will give my story a satisfactory conclusion with the minimum of world-wide exposure.

We are a small blog. We are visited by discrete, polite readers who hardly ever get excited, unless the subject is Tea Party politics, global warming, or Sylvia Poggioli. We probably won't recognize the name; we'll forget it the moment you say it, but it's just not knowing is hard for us. What I'm saying is, if you choose to share, your secret is, well, semi-safe with us.)