Accessibility links
What (Not?) To Do When You Meet the Last Great Wild Buffalo : Krulwich Wonders... William Temple Hornaday was one of the great conservationists of the 1880s. He had a deep passion for the American buffalo. That makes what he did when he found some of the last remaining buffalo improbable, strange and confusing.

What (Not?) To Do When You Meet the Last Great Wild Buffalo

What (Not?) To Do When You Meet the Last Great Wild Buffalo

Suppose there's a vanishing species of animal you love. Its population is down to a scary few, the last survivors are hiding deep in the wilderness, and you want to protect them, save them from extinction.

And let's further suppose, that one day, you happen upon a small remnant, the last of these wild animals, and by sheer luck, one of them is healthy, strong, beautiful, a true survivor. What would you do? Cage it? Trap it? Let it go?

I'm going to tell you a story — it's a true story, about William Temple Hornaday and the animal he loved, the American buffalo, but this tale is so improbable, so strange, I can't quite explain what happened. It makes no sense to me. 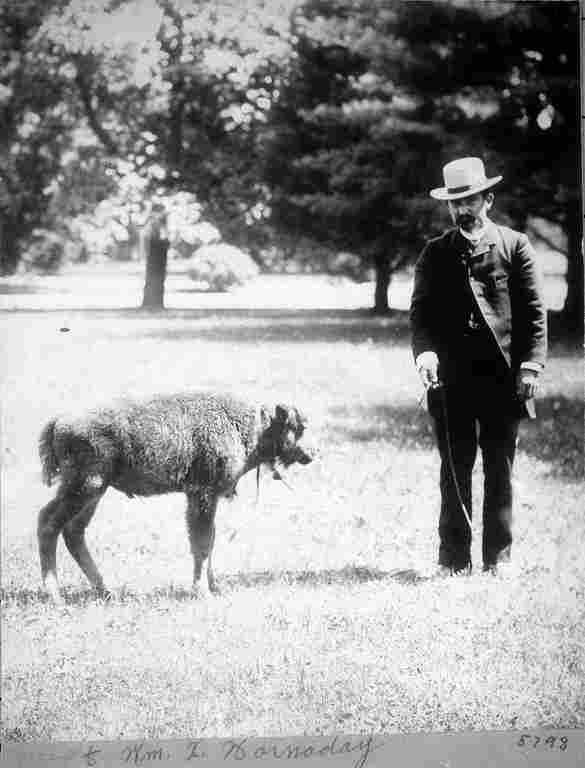 Here he is with his favorite, a little buffalo calf he called "Sandy", because of its light colored hair. Back in the 1880s William Temple Hornaday was a champion conservationist. Conservation was a new idea back then, and in Washington, D.C., Hornaday was a noisy, fierce, field tested, eloquent defender of wild animals, especially, extra-especially, wild bison. They were his passion. With Teddy Roosevelt, he helped found the American Bison Society. He was also Chief Taxidermist at the National (or Smithsonian) Museum.

In December of 1886, Hornaday was out in Montana looking for buffalo skins to put on taxidermy models at his museum. He also wanted to see buffalo in the wild so he could sketch them in proper "natural" poses for his dioramas. But as he pushed deeper into the Montana wilderness, he saw no animals, "for the reason," he wrote, "that the buffalo are not there." As you can see from this pile of bison heads, the great northern herd, once numbered in millions, had all but vanished. They'd been hunted almost out of existence. 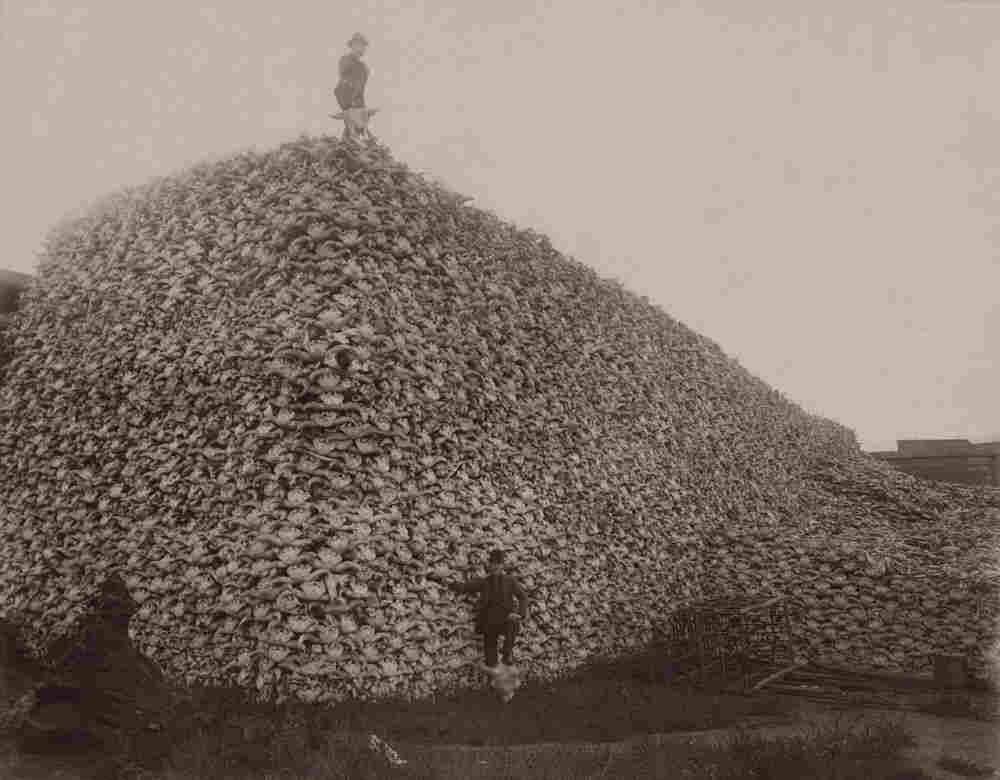 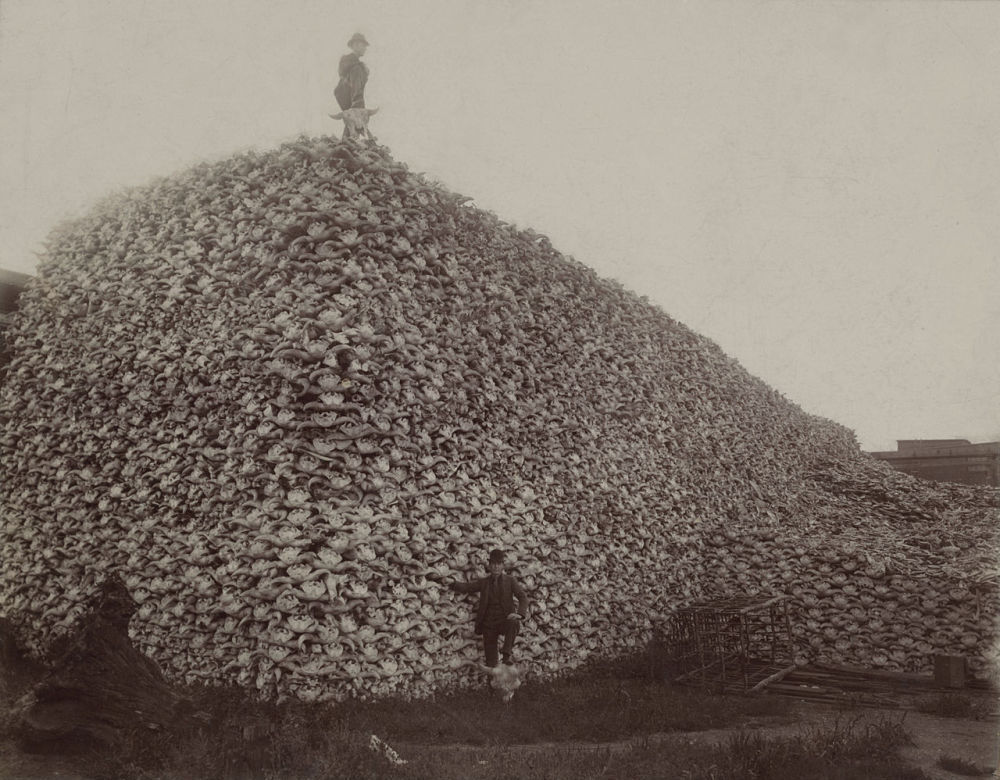 But he kept riding, kept looking, until one day, in December, off in an isolated canyon, he caught sight of a small group of buffalo clustered about a very, large bull. "This was a truly magnificent specimen in every respect," he wrote in his book The Extermination of the Buffalo, "much larger than any of the others." It weighed, Hornaday guessed, 1,600 pounds. It was strong, elegant, "His hair was in remarkably fine condition, being long, fine, thick, and well colored."

So what did Hornaday do? Having spotted this precious animal, he gave chase.

Buffalo can move fast: 35, 40 miles an hour; they can jump 6 feet vertically, and crash through thick brush, but Hornaday writes, "my horse carried me alongside my buffalo, and as he turned toward me I gave him a shot through the shoulder, breaking the fore leg and bringing him promptly to the ground."

He shot the bull. After hobbling this giant, Hornaday went off to assist in the shooting of a cow...

I then rode back to the old bull. When he saw me coming he got upon his feet and a short distance, but was easily overtaken. He then stood at bay, and halting within 30 yards of him I enjoyed the rare opportunity of studying a live bull buffalo of the largest size on foot on his native heath. I even made an outline sketch of him in my note-book. Having studied his form and outlines as much as was really necessary, I gave him a final shot through the lungs, which soon ended his career.

So he shot him. Then he drew him. Then he killed him. Then he shot the rest of the herd. "We killed very nearly all we saw," he wrote back to the Museum, "and I am confident there are not over thirty head remaining in Montana, all told. By this time next year the cowboys will have destroyed about all of this remnant. We got in our Exploration just in the nick of time, ..." 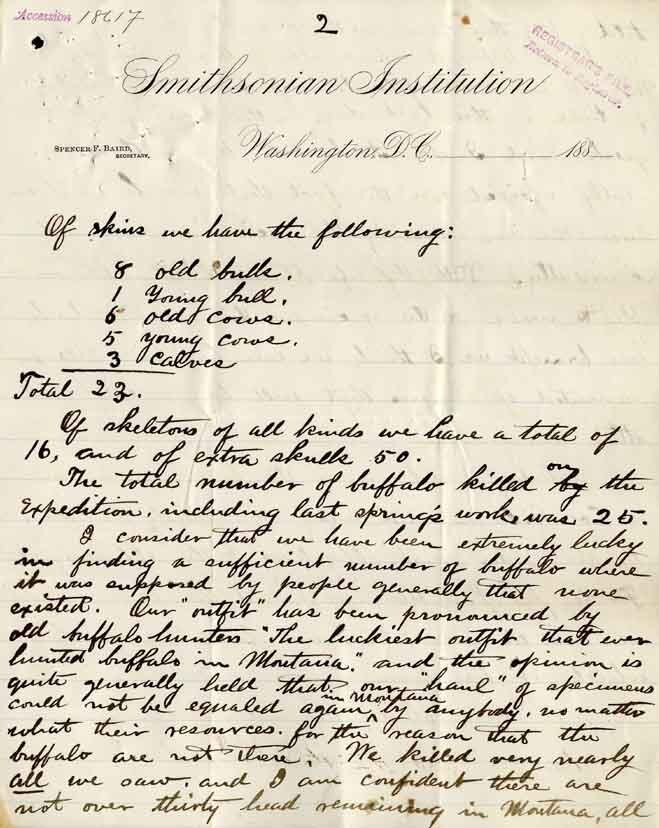 Why did he do it? How could he so matter-of-factly put an end to the life he wanted to preserve? Maybe he figured these animals were as good as gone, so before they went forever, he needed a memento to warn against future extinctions. He was, after all, a taxidermist. He knew how to make dead animals seem alive. Here he is, working on a tiger... 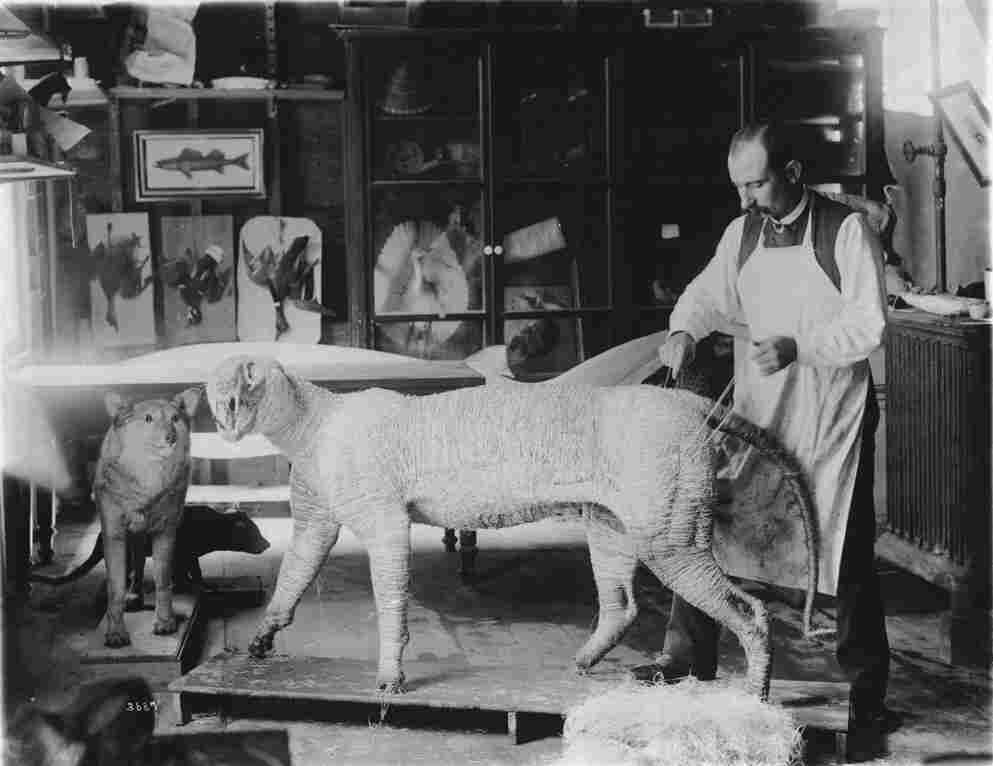 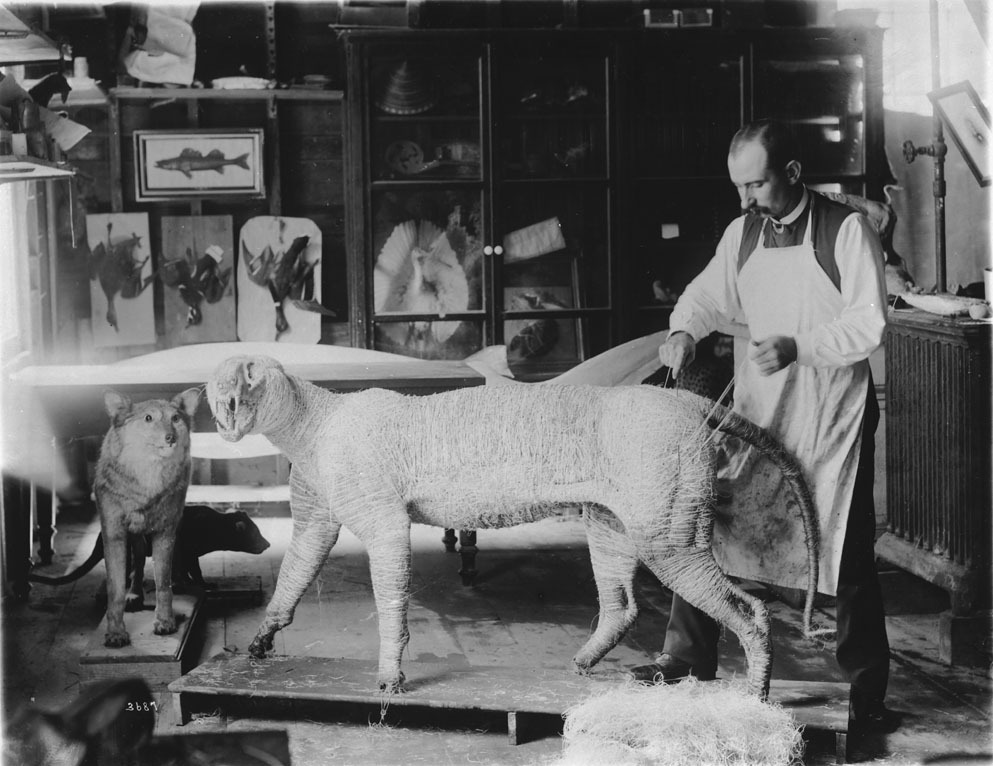 So maybe he shot the last gorgeous specimen to remind Easterners in a very vivid way what a remarkable animal once roamed the American plains. And that, by the way, is where these buffalo ended up. Here they are, with the big bull, in a display case, joined by the little calf you saw in our earlier picture, who died at the museum of natural causes. 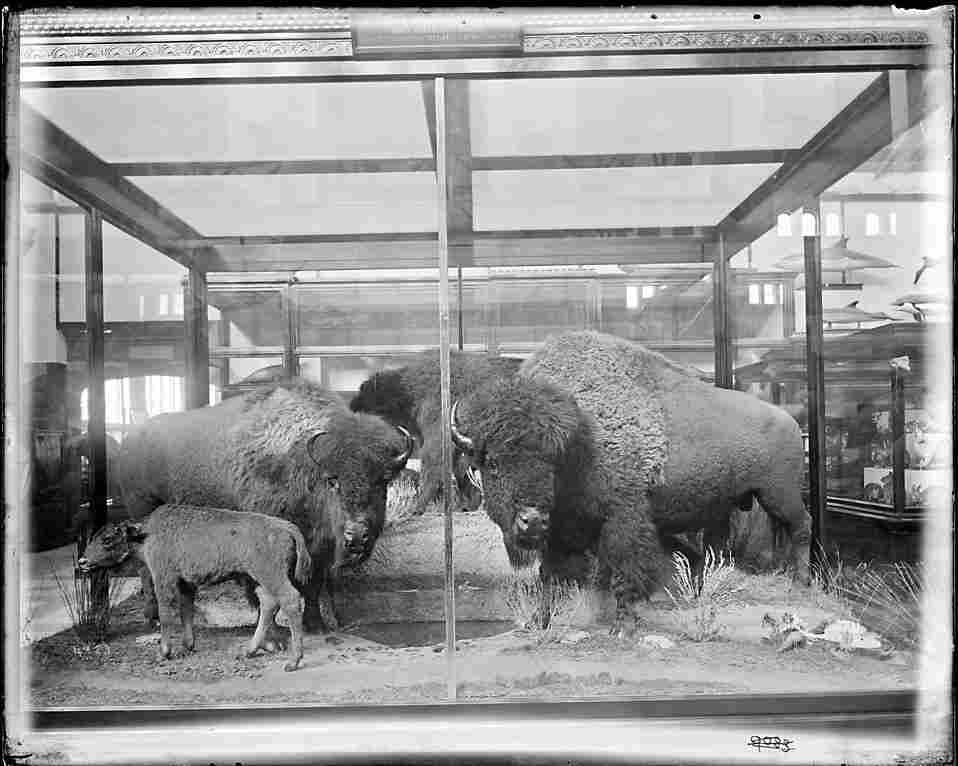 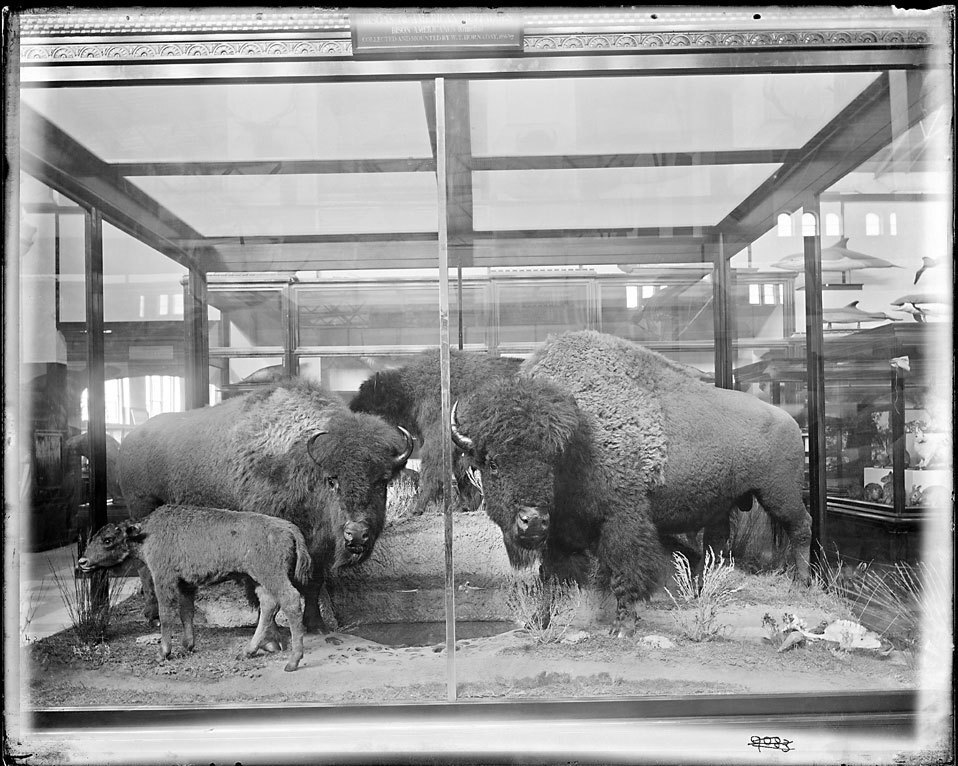 If that was his purpose — to create a frozen scene that would make buffalo look romantic and tragic — I suppose it worked. The museum exhibit was a huge success.

Later on, Hornaday did create an exhibit of living buffalo at the Bronx zoo, and got the herd big enough to begin exporting back to the west. So he also pioneered the alternate, modern approach, where we take last living specimens, put them in a zoo where they become living fossils, keeping their DNA going in the hopes that one day we can reintroduce them into a world that no longer has their old habitat.

But the question remains: Hornaday knew these animals in their wild state. He knew what they looked like snorting through the plains in thundering mobs, raising dust. So why, when he came upon a grand specimen, maybe the last of its kind, why did he look at it and think only, "Ah, this will be a great sculpture"? That's what I can't figure out. Why isn't a thing with breath, with temper, with muscle, with menace, better than that thing frozen in a glass case?

I'm trying to get into his head. What was he thinking?

If you wish to see Hornaday's buffalo, they are still on exhibit, but no longer in Washington. They are all back in Montana at the Montana Agricultural Center and Museum. Hornaday's letters about executing the buffalo are online, and, while we're on the subject of conservationists hunting remnant buffalo, curiously, there's a scene in Edmund Morris' 1979 masterpiece, The Rise of Theodore Roosevelt, that almost exactly mimics Hornaday's story. It's happened in South Dakota in 1883, and this is TR talking:

There below me, not fifty yards off, was a great bull bison. He was walking along, grazing as he walked. His glossy fall coat was in fine trim and shone in the rays of the sun, while his pride of bearing showed him to be in the lusty vigor of his prime. As I rose above the crest of the hill, he held up his head and cocked his tail to the air. Before he could go off, I put a bullet in behind his shoulder. The wound was an almost immediately fatal one, yet with surprising agility for so large and cumbersome an animal, he bounded up the opposite side of the ravine...and disappeared over the ridge at a lumbering gallop, the blood pouring from his mouth and nostrils. We knew he could not go far, and trotted along his bloody trail...

There is this difference: Teddy didn't harvest the skin. He ate this buffalo. It tasted, he wrote, "uncommonly good..."