Accessibility links
Shake It! How Dogs, Cats, Even Hummingbirds Keep Dry : Krulwich Wonders... Animals, of course, don't have towels. So when they get wet, what do they do? They shake themselves into a frenzy. Have a look.

They don't have towels. So when they get wet, what do they do? They shake themselves into a frenzy and the water flies off like this: 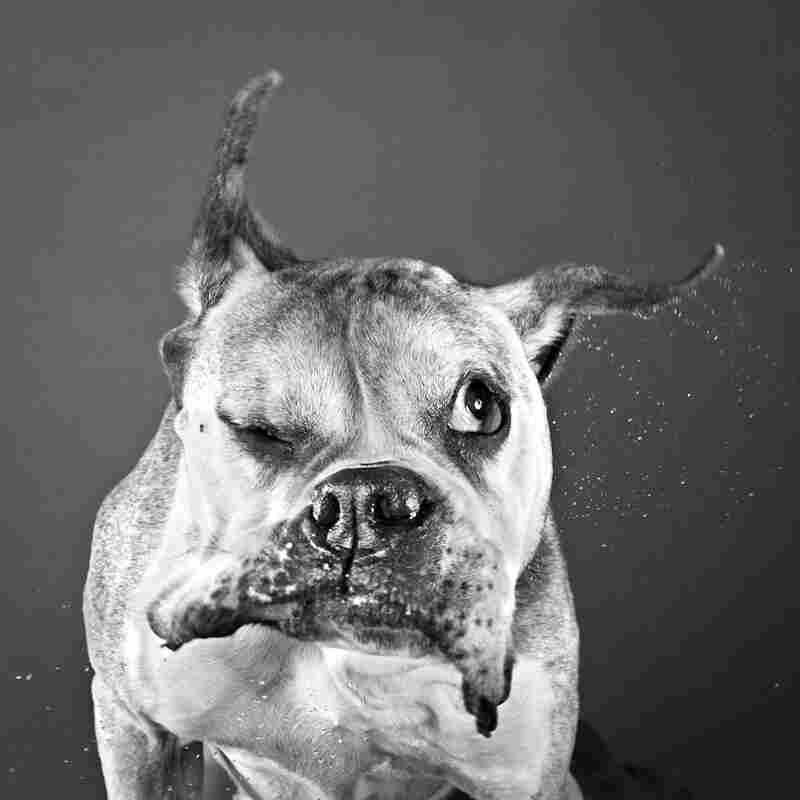 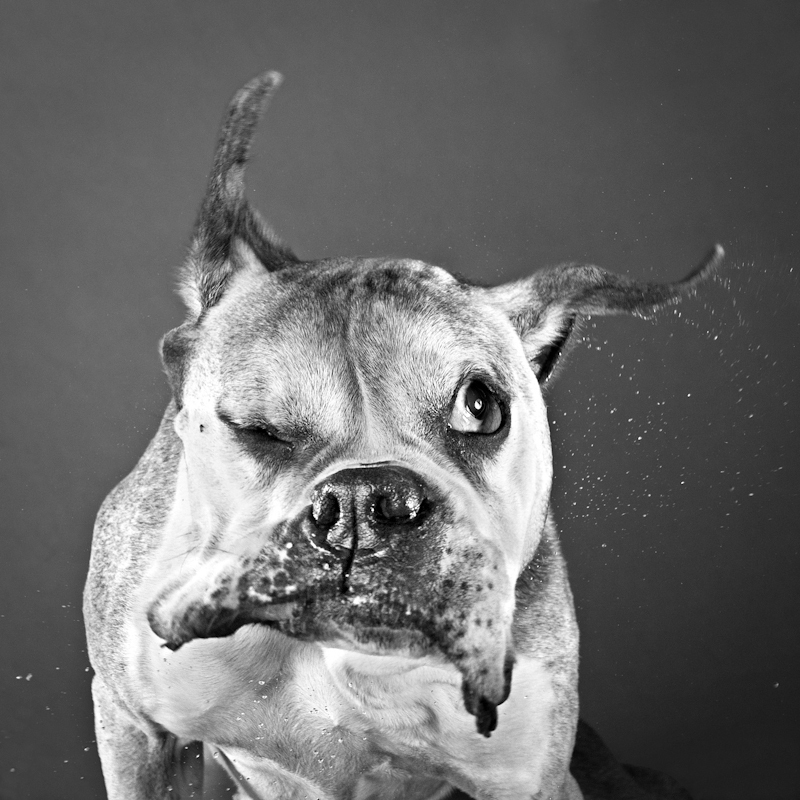 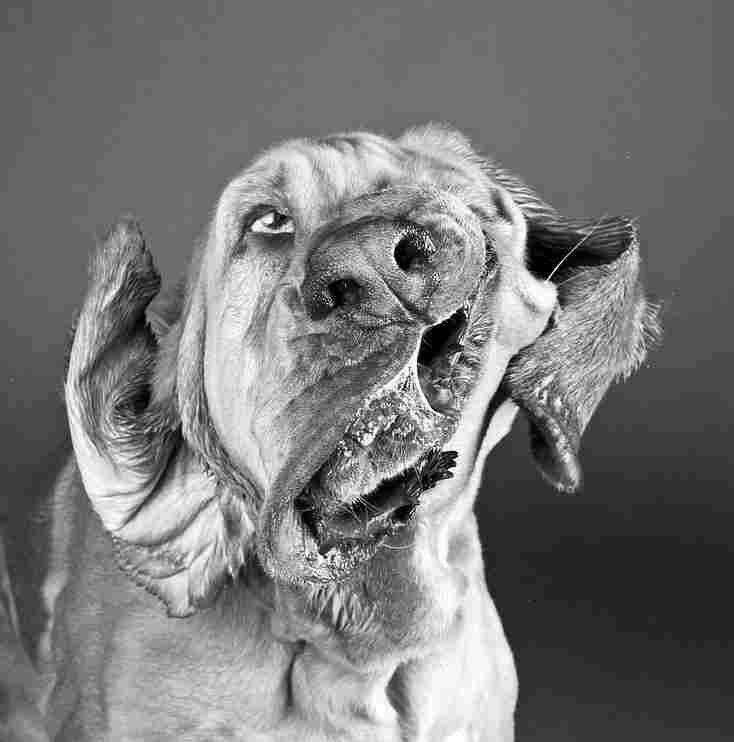 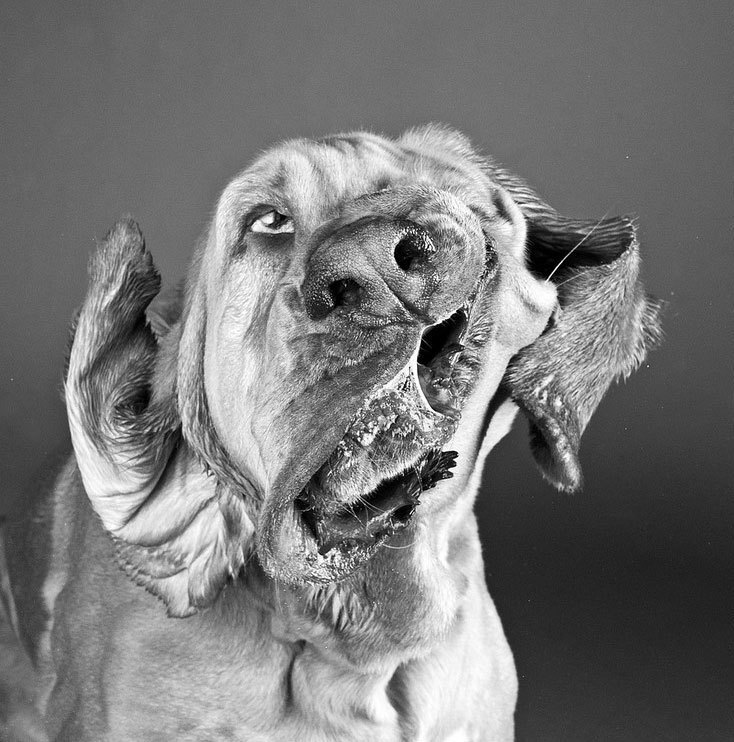 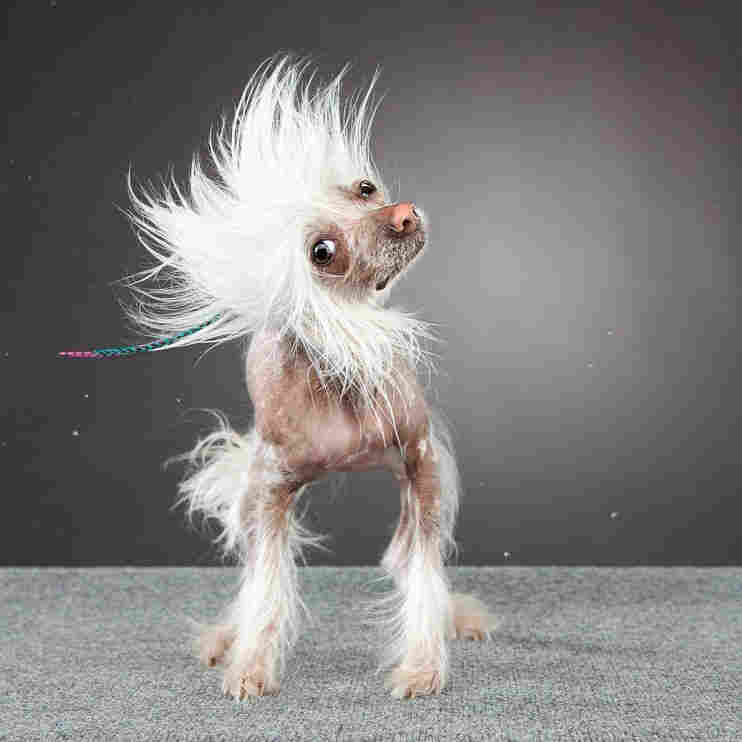 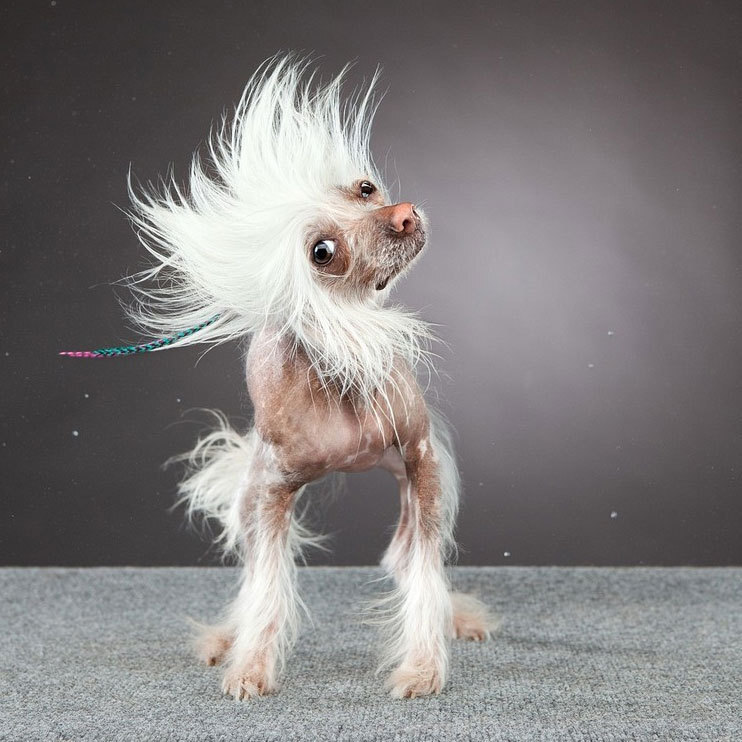 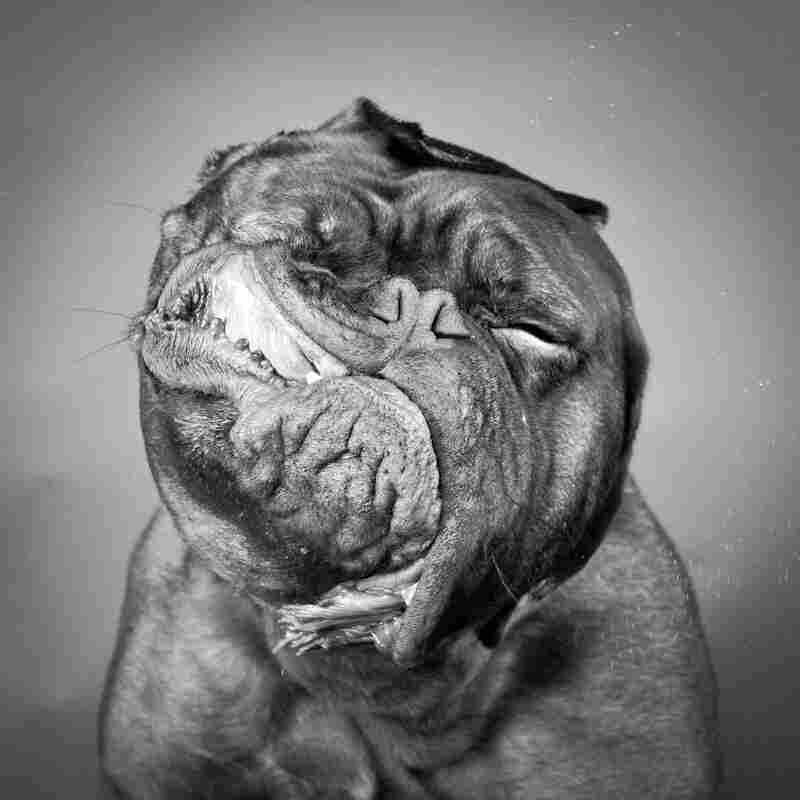 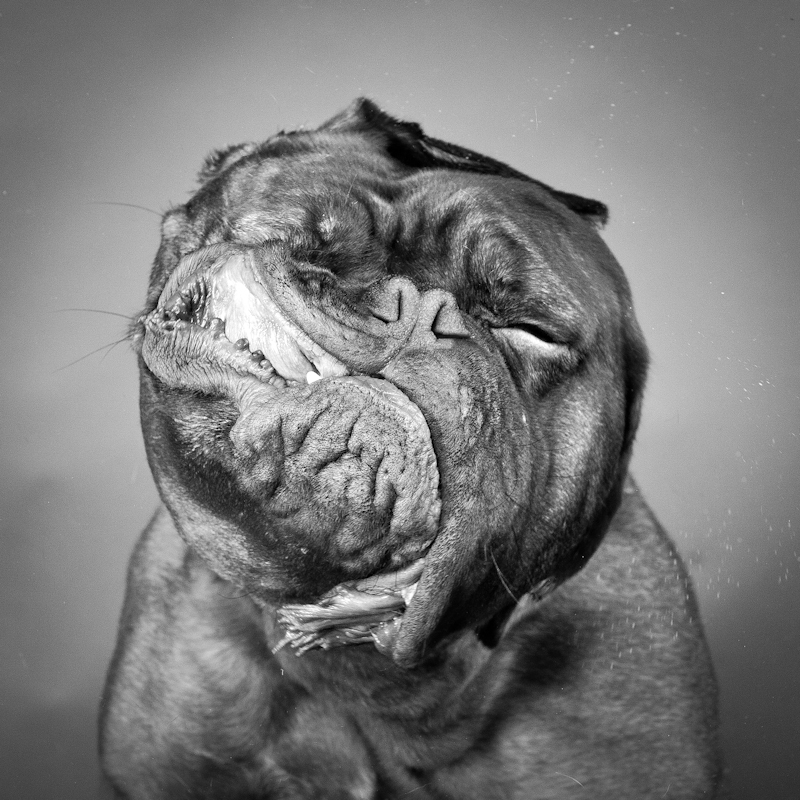 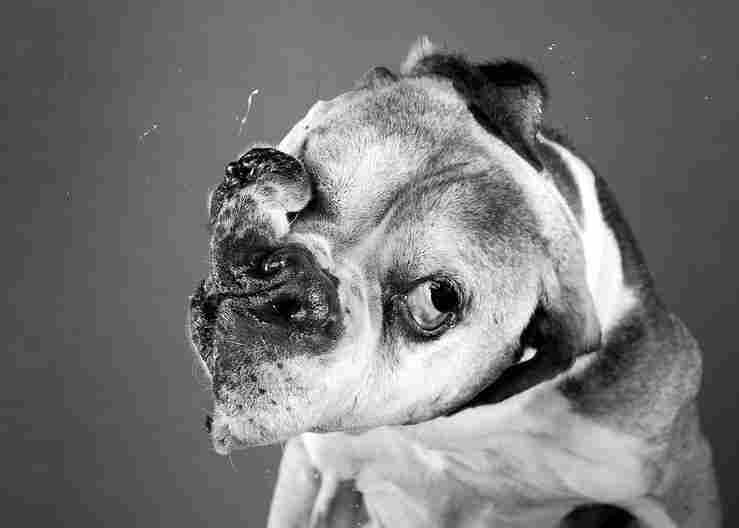 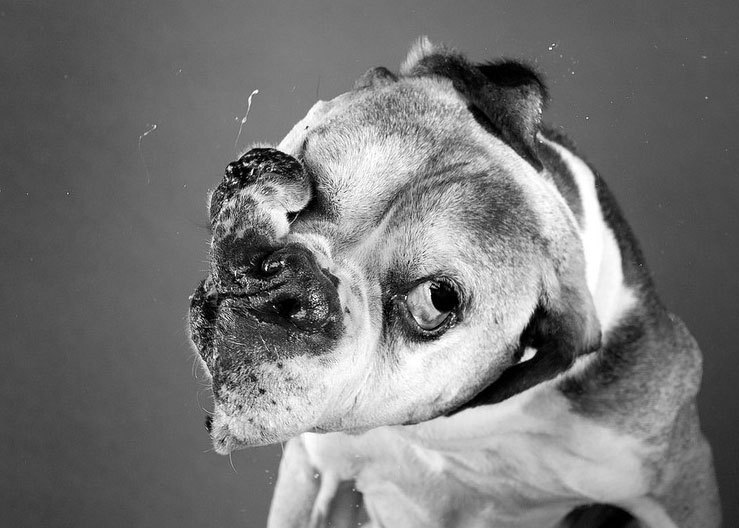 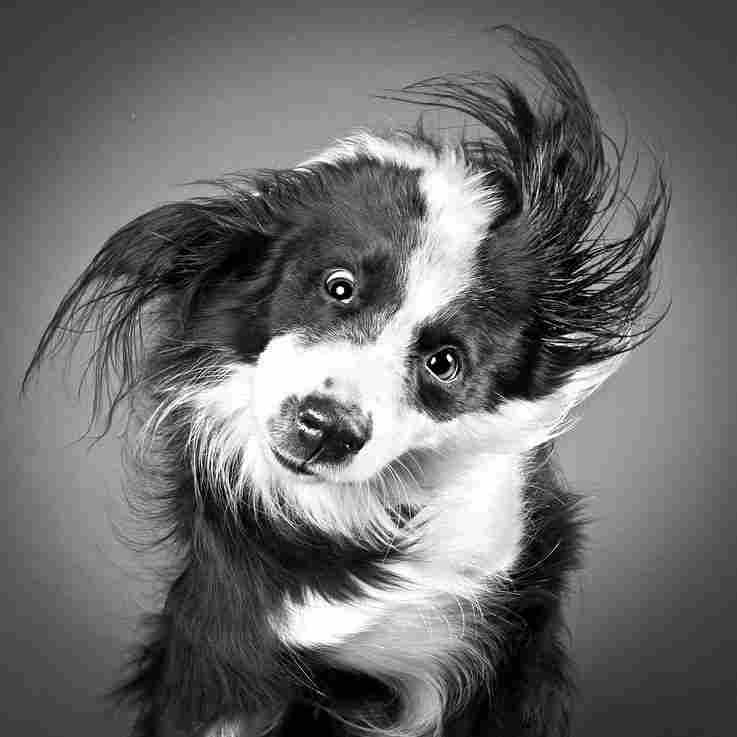 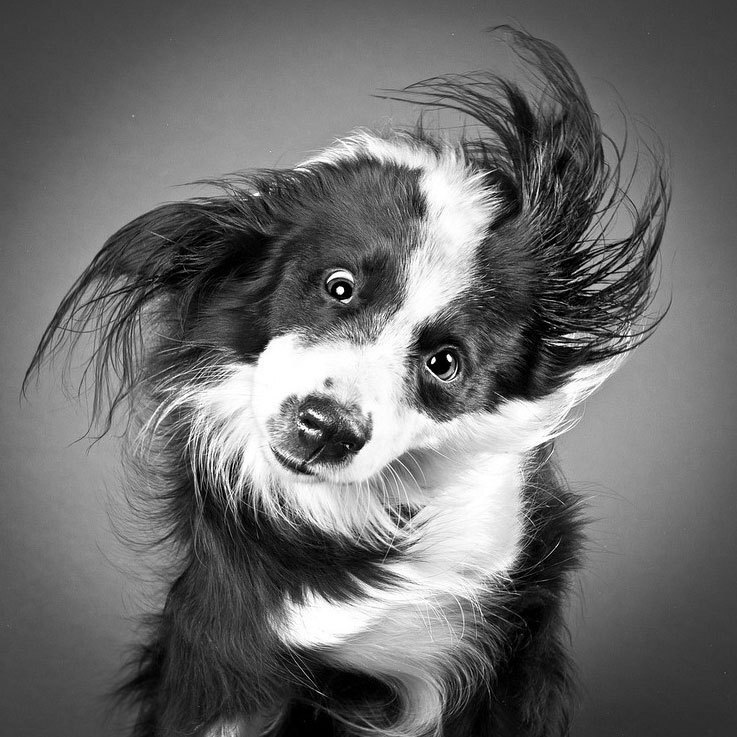 I've seen dogs do this countless times, cats too, but Carli Davidson's photos make you appreciate how intense the shake must be to literally toss the water droplets outward. The animal will typically start by shaking its head side to side, twisting its neck, then the shaking motion moves through the rest of the body, ending with the tail. Does this hurt? (I imagine not. Think about being a woodpecker.) Still, there are times when rainy days must be a real headache. Imagine having to shake with an extra-heavy load of bone, like this guy. 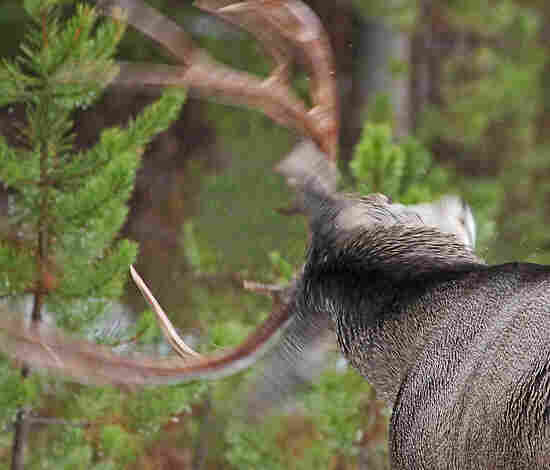 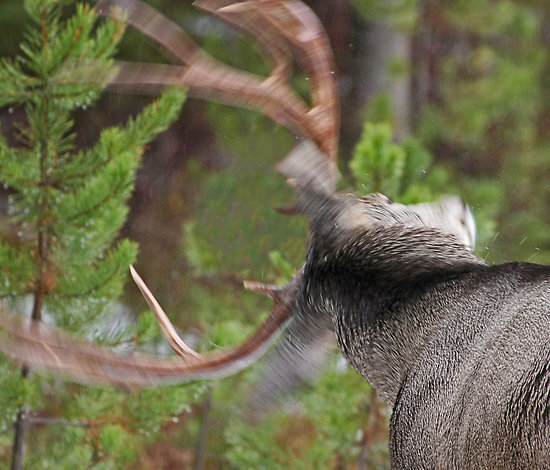 But here's the news: This month, Victor Manuel Ortega-Jimenez and Robert Dudley at the University of California, Berkeley, published a paper describing how an animal weighing about an eighth of an ounce does the same thing. The Anna's hummingbird whips its head back and forth 202 degrees — which is more than half way around — at the amazing rate of 132 times every second, and not while standing in place, legs on the ground like a dog or a deer. No, it does this while flying through the air! So it's shaking, navigating AND flapping at the same time. Take a look.

But Why Do They Do It?

Here's why they do it. A little drop of rainwater is a heavy burden when you only weigh an eighth of an ounce. If you can't flick it off, you'll either need a lot of extra calories or you'd better hide on rainy days (and starve, because Anna hummingbirds live in cloud forests.)

The surprise is that these hummingbirds can do this AND keep their sense of direction. As Robert Dudley told the BBC, swinging one's head wildly left to right every tenth of a second can't be good when you are trying to get someplace.

"We know visual information is the key to flight control, and, obviously, when you are shaking your head, you don't have that input of flight acceleration, and yet they remain basically stable — they are not falling out of the air."

Plus, they're keeping dry and getting where they need to go.

Not that I'd trade my towel or my umbrella for their shake-it system, but still ... Wow!

Victor Manuel Ortega-Jimenez and Robert Dudley's paper is called "Aerial shaking performance of wet Anna's hummingbirds," Journal of the Royal Society Interface, Nov. 9, 2011. Carli Davidson's photo essays on animals can be found on her site, http://carlidavidson.photoshelter.com. And thanks to photographer A.M. Ruttle for her shot of the rain-shaking deer.