Accessibility links
The Best Hike On Mars You'll Ever Take : Krulwich Wonders... We're going back to Mars: Next summer, a Jeep-sized robot will land on the red planet, and the search for Little Green Men will continue. Except nobody's looking for those anymore. Instead, the hunt is on for very teeny martians, shaped like itsy bitsy rods.

The Best Hike On Mars You'll Ever Take

The Best Hike On Mars You'll Ever Take

It took five years, three months and 27 days, but you can do it all in three minutes. Here, from start to finish, is what the NASA rover "Spirit" sniffed, bopped, scratched and saw as it moved across 4.8 miles of the Martian surface.

The lens is wide-angled, so the horizon always looks like a curved mountain top; every so often a one-armed probe, looking weirdly lobster-like, will suddenly appear, noodle around, poke, tap or sift through the Martian soil.

Towards the end you'll catch glimpses of the sun setting, (same sun! different set! I thought.) until Spirit gets stuck in the Martian muck and then, dramatically, everything goes dark. The folks who edited this together added movie music, which makes it really fun to watch. This is the best low-res, low-priced, low energy Martian hike you'll ever take.

And, for those of us who like this kind of thing, we're going back! Next summer, on Aug. 5, a Jeep-sized vehicle-laboratory thingy called Curiosity will — we hope — land on Mars. Our search for Little Green Men will resume.

Except nobody's looking for those any more. Instead, the hunt is on for very teeny Martians, shaped like itsy bitsy rods, that look (on Saturday morning tv, anyway) something like this... 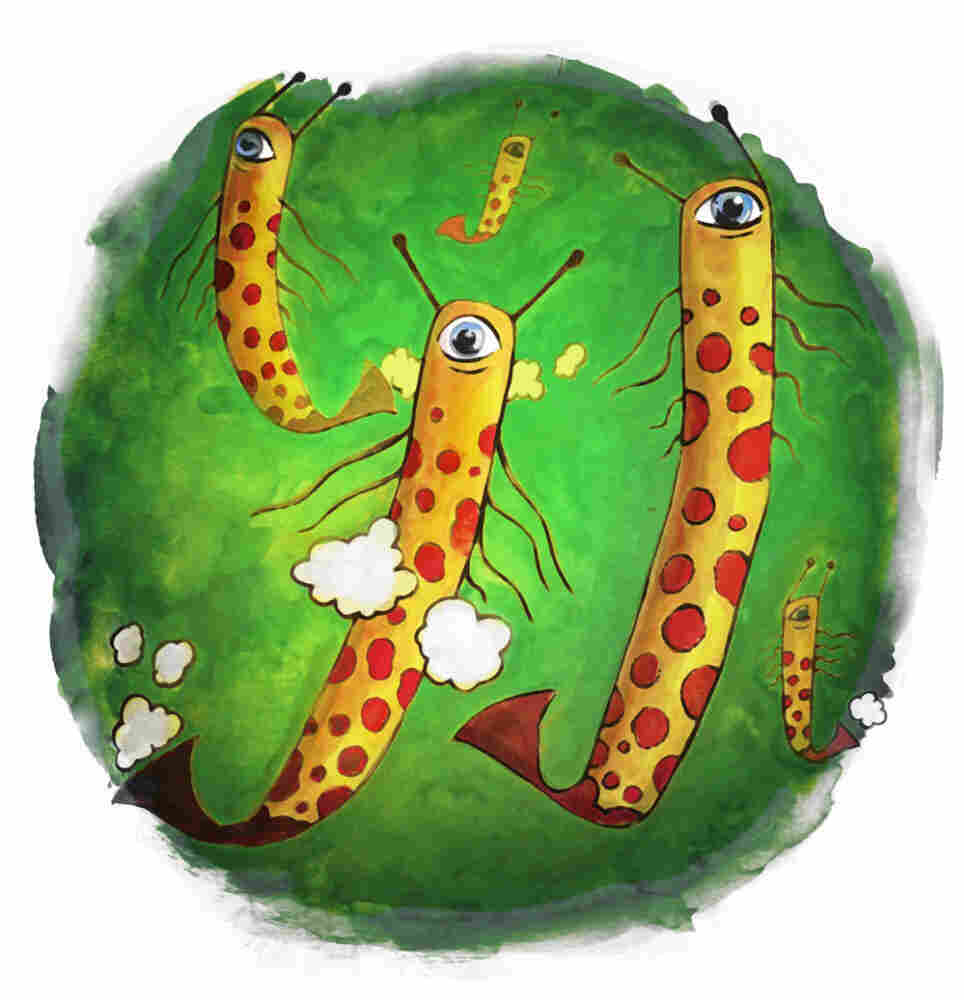 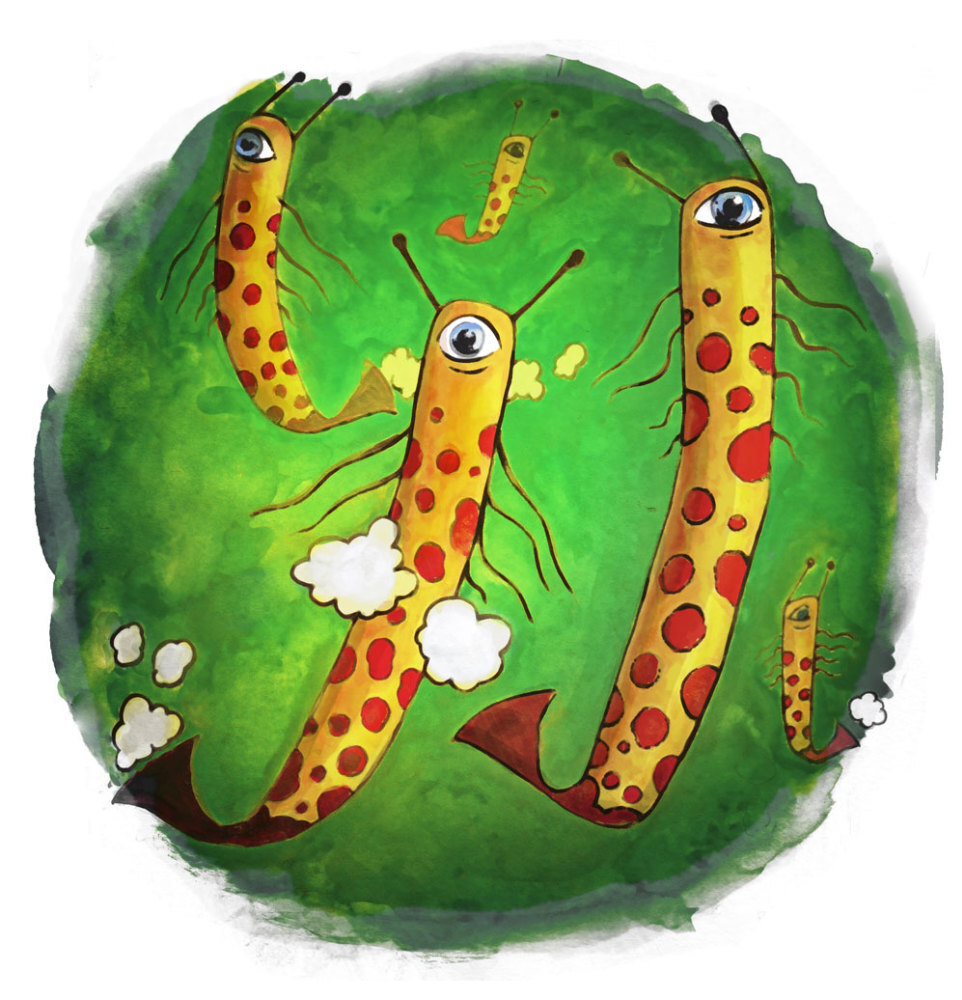 Methanogens are very primitive microorganisms that both produce and consume methane. When you come close to a swamp and catch the smell of "marsh gas," that's methanogens doing their methaney thing.

And not too long ago, we discovered there are at least five places on Mars that also leak methane. Lots of it. At one location, NASA scientist Michael Mumma found 20,000 metric tons of methane in big "plumes" hanging in Mars' summertime northern hemisphere. They are new emissions, because on Mars, methane disintegrates pretty quickly in the atmosphere.

So why care about swamp gas on Mars?

But on Mars? That's the question.

If we find Martian methanogens dead or alive, then we have just discovered life elsewhere in the universe. That's a biggie. And Micheal Mumma has a hunch they might be living right now below the Martian surface, deep down, or under a blanket of ice, or maybe they died and the methane from their decay is trapped down there, and every so often escapes.

Here's the dream scenario for those of us who wanted to meet Little Green Men, but have to settle for micro-Martians instead: (I found it in Marc Kaufman's wonderful new book First Contact.) We go to Mars. We scoop up some frozen Martian soil buried under the surface. We add a little heat, and frozen bits of dirt suddenly stir, and we look closely...and...Hello Martians!

This very thing happened here on Earth. As Marc describes it, NASA astrobiologist Richard Hoover found microbes deep in an Alaskan tunnel at a level that contained life buried for 32,000 years.

They were inactive in the ground, but when warmed they came alive and even moved and, if they were methanogens, began to produce methane. Something similar could happen on Mars.

We wish. That's why the new vehicle, Curiosity, will try to detect methane this summer, as will the probes that follow it later in the decade. And that's why those of us who hope to be around for a first encounter with alien life will be biting our fingernails for the next decade, hoping it happens while we're still here. I mean what could be more exciting?

Well, there's this: Hans Ulrich Kaufl, a NASA scientist and colleague of Michael Mumma, is quoted in the book saying (tongue in cheek) what if we get to Mars, find a plume of methane gas, follow it to its source, look closely and discover "large herds of farting cows"? 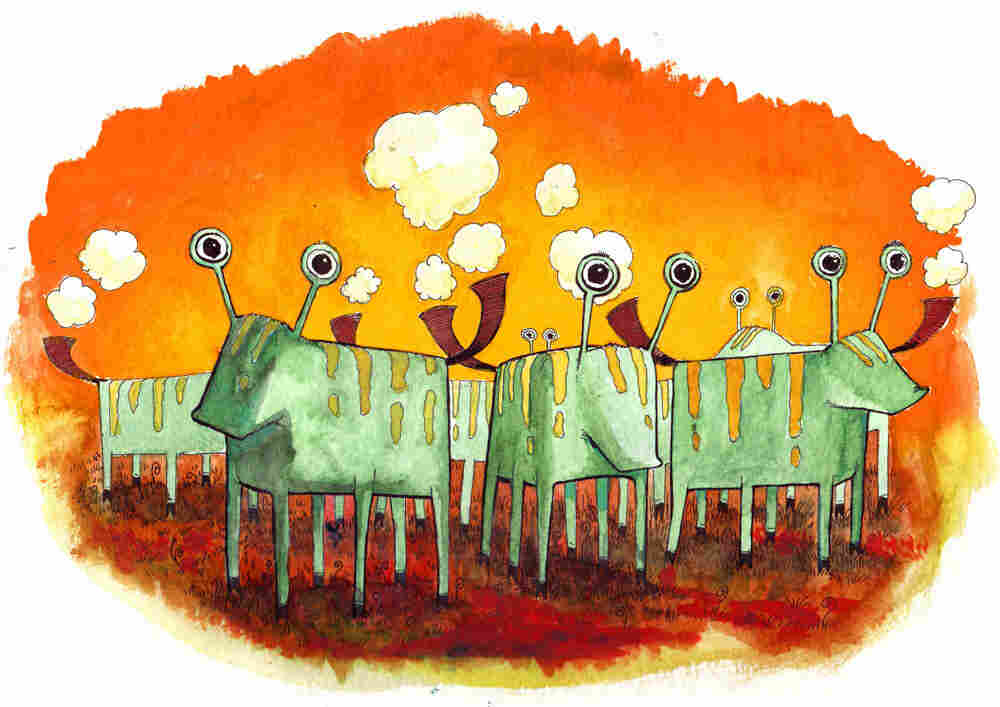 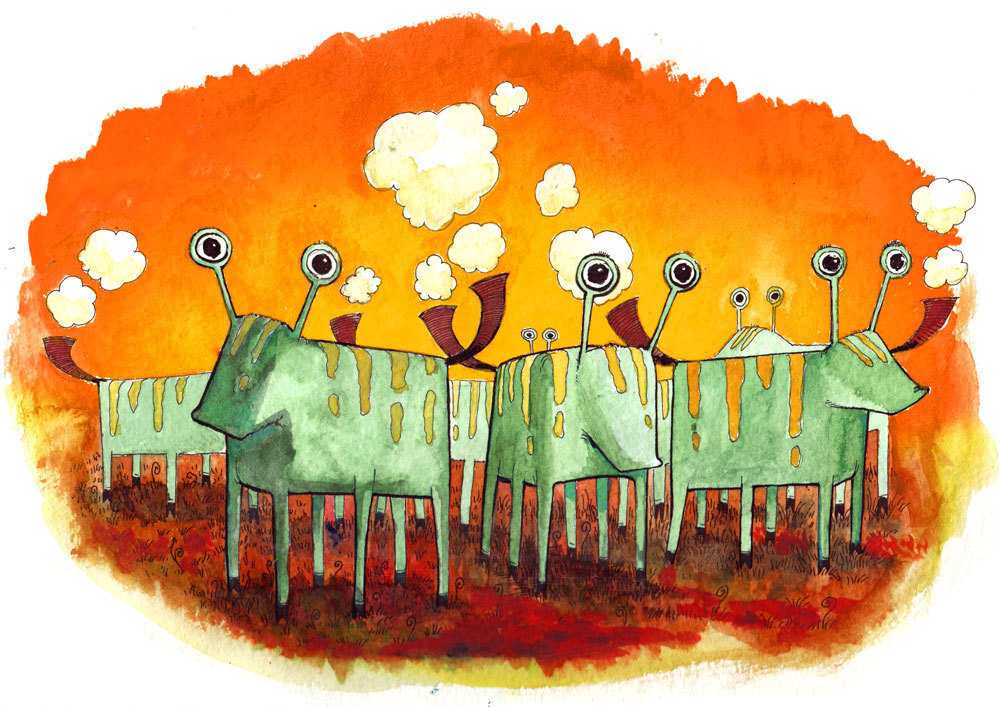 Now that would be awesome.

Science reporter and national editor at the Washington Post Marc Kaufman's new book is called First Contact; Scientific Breakthroughs in the Hunt for Life Beyond Earth (Simon and Schuster, 2011) Michael Mumma talks about methane on Mars in this short, nicely animated NASA video, and our own Martian fauna come from the addled brain of artist/illustrator/film animator Benjamin Arthur.