Accessibility links
When Bubbles Get Comfortable : Krulwich Wonders... When you think of a bubble, you think of a perfectly round, spherical shape, right? But what happens when you squish bubbles together?

When Bubbles Get Comfortable

When Bubbles Get Comfortable

Me: Manu, you're a bubble man, no?
Manu: I'm all about bubbles. I study soft matter physics.
Me: Just the guy I was looking for. I've got some soap bubbles to show you.
Manu: OK, show me. Where are they?
Me: Well, I found them in a video, a beautiful, but slightly troubling video, shot by photographer Kim Pimmel.
Manu: What do you mean, "troubling"?
Me: Well, look first, then we'll talk.

Compressed 02 from Kim Pimmel on Vimeo.

Manu: So?
Me: So the guy who made this video injected dye into the clump of soap bubbles so we can see each bubble's shape...
Manu: And...?
Me: Well, look! Don't you see something wrong?
Manu: No... 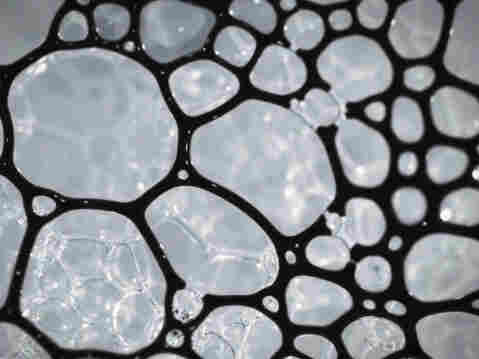 Me: Aren't soap bubbles supposed to be round?
Manu: Often, they are...
Me: No, I mean when I blow chewing gum bubbles, or bubble-blowing bubbles, they're always round-ish...
Manu: Your point?
Me: Well, the bubbles in this video aren't round at all! When the dye comes in, it turns out they've got sides, five, six, sides; they're very polygonish. Why aren't they round?
Manu: The bubbles you've been dreaming of are single bubbles. What you have here are a bunch of bubbles from hand soap, all clumped together...
Me: OK...
Manu: And as the water drains off, they squeeze so close, they can't be round any more. There's no room.

Why Angles?
Me: But why do they form angles? Why don't they just get squished, like balloons mushed together?
Manu: Well, to make this extra simple...
Me: Feel free.
Manu: ...If you're a bubble, the next best thing to being round is being a trio.
Me: A what?
Manu: A trio. A group of three. Three bubbles intersecting at a common point can persist, can stay bubbles.
Me: Really?
Manu: Yup. And here's the fascinating part. Look at this freeze frame. Do you see something strangely beautiful here? 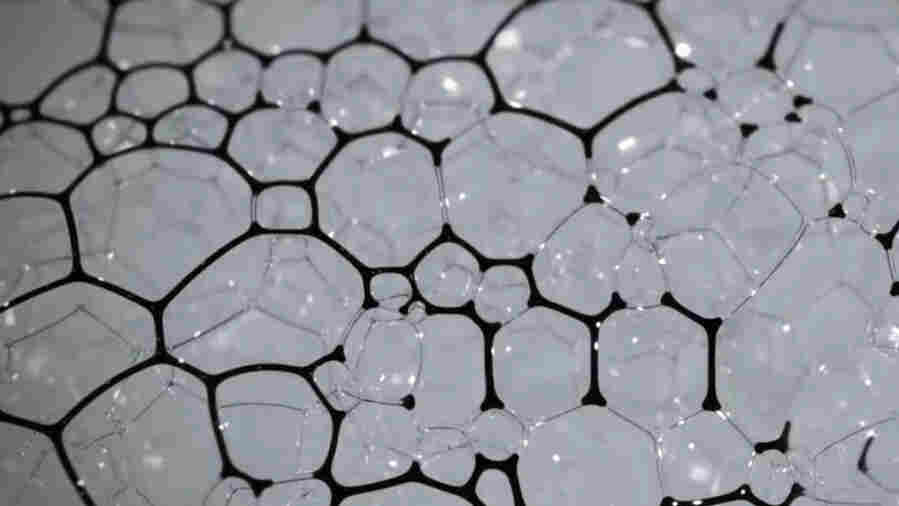 Me: Ummmm, no.
Manu: Well, look again, at the angles formed where the bubbles intersect. Over and over and over again, it's the same angle! Roughly (in the natural soapsud world, there are variations around the mean) 120 degrees. A slice of soapsuds, in turns out, is a carnival of 120 degree angles! 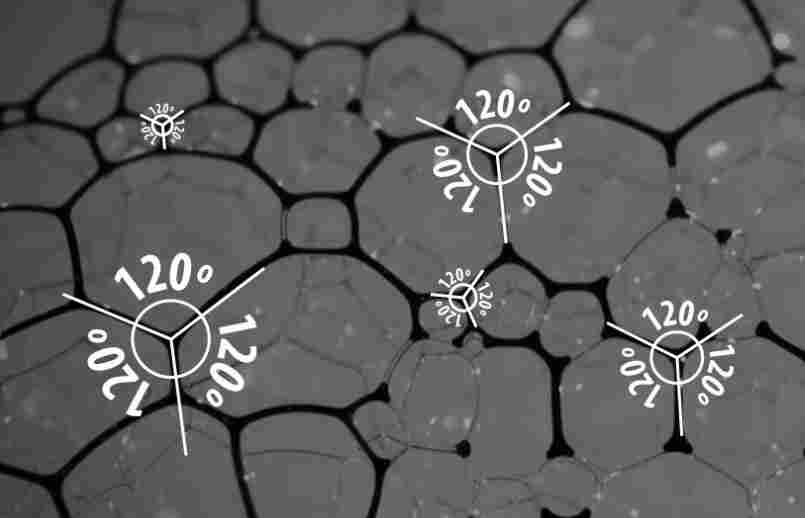 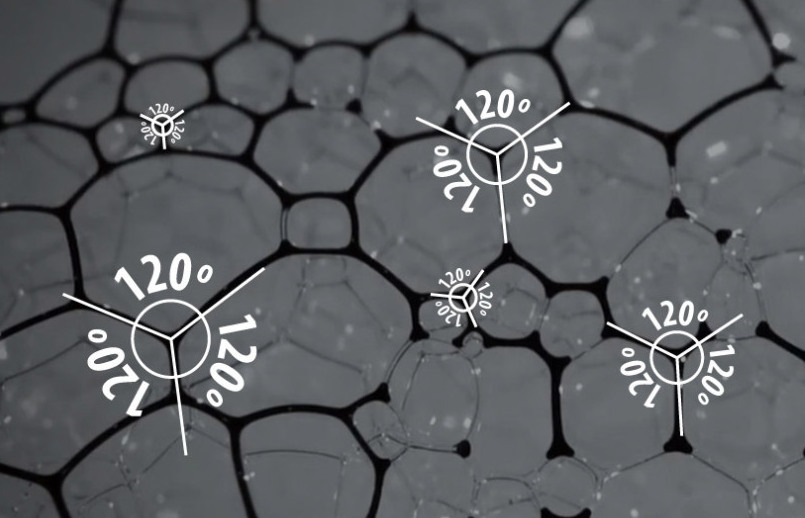 Kim Pimmel is a designer at Adobe in San Francisco. His "love for old cameras, stop motion and time-lapse" is obvious when you check out his video explorations of motion, soapsuds and small structures, at his website. He is looking, he says, for "the little jewels of perfection nestled in the mundane." The bubbles in his video, he tells me, come from hand-soap mixed with tap water. He added corn syrup to stabilize the bubble structure. The black dye is ferrofluid, the red dye is red food coloring, that big black circular thing is not a drain, it's a magnet, which helps draw the black dye to the surface so we can better see the bubble structures.

Manu Prakash is an Assistant Professor at Stanford University's Bioengineering Department. He just opened his lab and will be studying fluid mechanics in biology, algorithmic self assembly, nonlinear droplet microfluidics, and design for development. In his spare time, he hides from me while I email him, call him and pester him 8th grade physics questions.