Accessibility links
What The Panda Won't Tell Us : Krulwich Wonders... Every giant panda is a riddle, a contradiction, said biologist Stephen J. Gould. Each one is a soft, furry ball of adorableness "with a large, round head and clumsy, cuddly body" that we all want to hug. But that panda only exists in our minds. What's the real panda like?

What The Panda Won't Tell Us

What The Panda Won't Tell Us

Look at this animal. ... What do you see? Or more importantly, what don't you see? 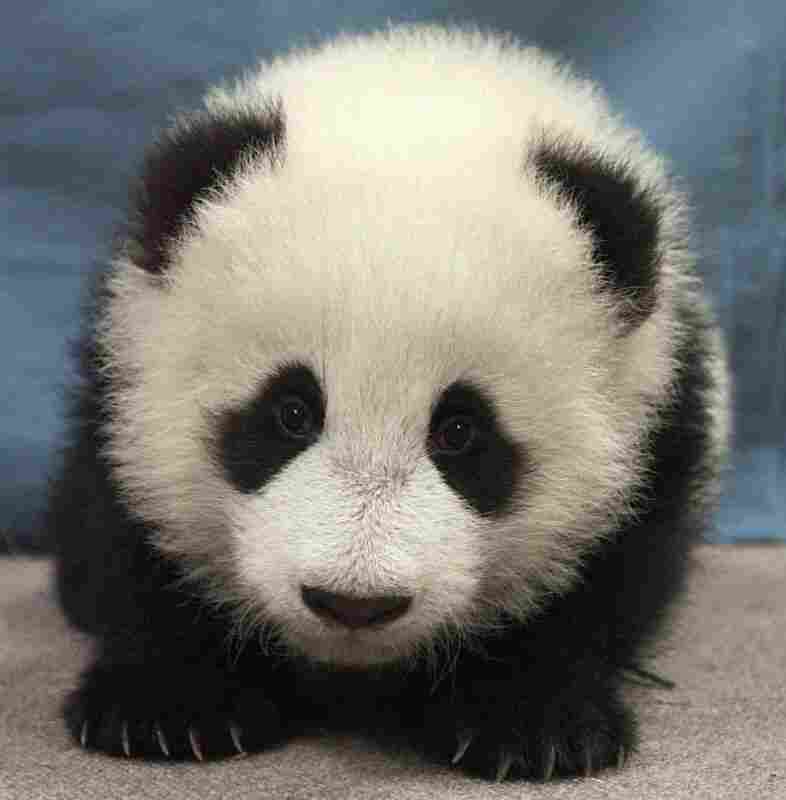 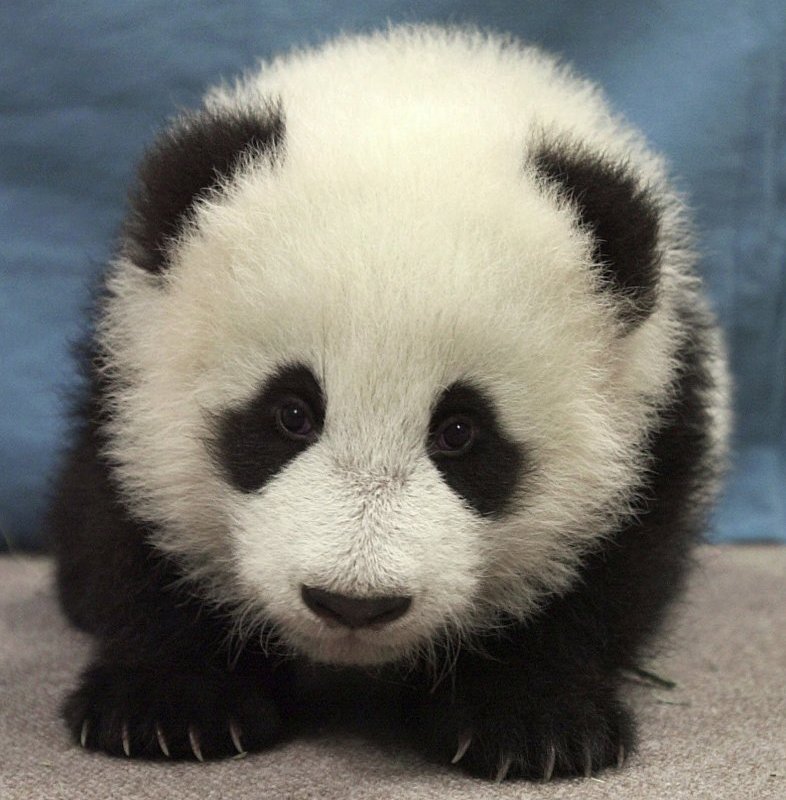 Every giant panda, said evolutionary biologist Stephen J. Gould, is a riddle. A contradiction. Each one is, first, a soft, furry ball of adorableness "with a large, round head and clumsy, cuddly body" that we all want to hug. That panda, said Gould, "exists in our mind."

Then there's the hidden panda, the real one that isn't as we imagine, that lives in the wild — and that panda, Gould wrote, "has remained essentially a mystery."

Thirty years ago, scientists knew next to nothing about pandas. Because the animals live in dense forests thick with bamboo, in 1980, when George Schaller from the Bronx Zoo and a team of Chinese scientists spent four years searching in Sichuan, they saw pandas rarely, only 16 times in the first two years. Most viewings, they wrote later, "were brief — a glimpse as an animal crossed an opening or ambled up a trail." 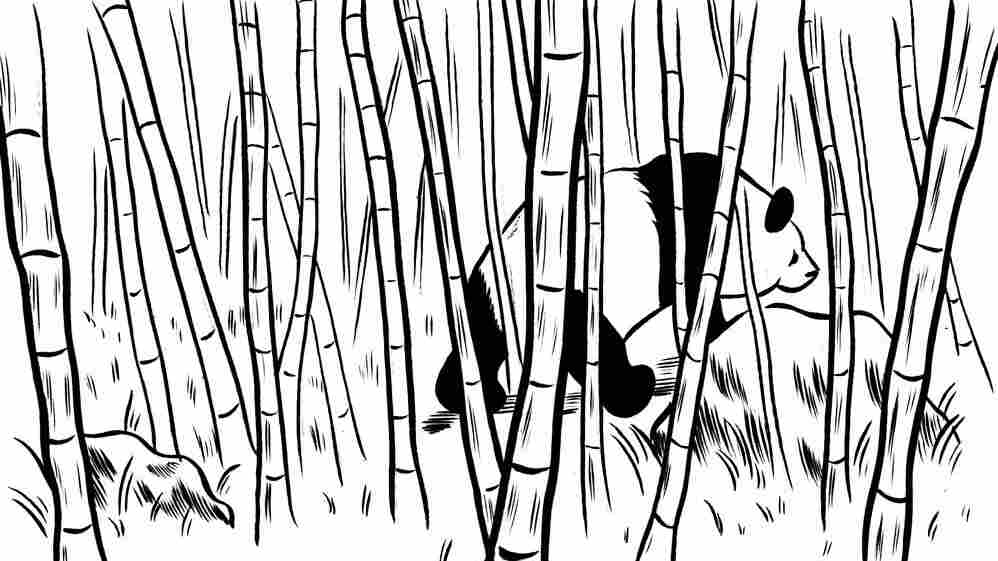 So what do biologists do when close encounters are few? They turn to indirect evidence of behavior. Which, in the panda's case, meant poo. Pandas defecate constantly.

Schaller weighed, measured and examined that poo. He checked the bamboo shoots. (How much did they eat? How much did they digest?) It was exacting, exhausting work, often boring. But Schaller kept at it. Here's his map of one panda moving along a trail on May 31, 1982. The little black dots are poop deposits, all carefully counted. 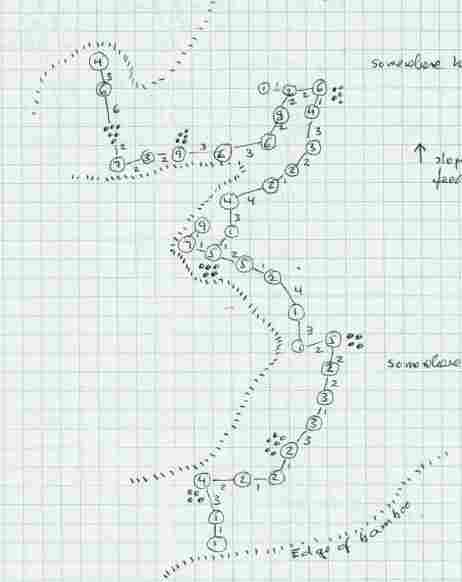 Enlarge this image
Courtesy of George B. Schaller/Harvard University Press 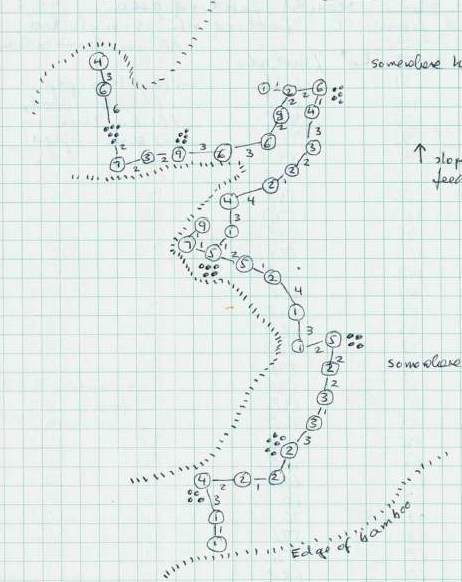 After four years in the field, Schaller and his team were able to report that giant pandas spend about 60 percent of the day eating, and the rest of the time sleeping or resting (mostly to emit what they ate), plus a few minutes grooming and scent-marking, but almost no time playing or gamboling, as we like to think. Pandas in the wild are rarely romantic, don't cuddle and are certainly not like the pandas of our minds.

As to what goes on in a real panda's mind, Schaller says he has no idea. After years spent tracking, poop collecting and bamboo measuring, he says pandas remain deeply strange to him. He knows everything they do, but he can't say much about who they are. In his book, The Last Panda, he imagines getting a letter from one of them. It's respectful, but the panda tells him, this "science" you do? It will never describe the real me. ....

But in Schaller's defense (and the typing panda should know this), those scientific studies did have consequences.

Before he set out, conservationists thought that pandas were losing population because their food source was untrustworthy, because wild bamboo goes through cycles, and sometimes there's not enough to eat. But Schaller found no evidence of starvation. Instead, he found that human poachers were to blame. So, according to Wikipedia, "Schaller would hand out cards to wildlife hunters that read:

All beings tremble at punishment, to all, life is dear. Comparing others to oneself, one should neither kill nor cause to kill."

After Schaller's first few expeditions, predation went down, the Chinese government stepped up enforcement, and since then, the Wiki entry says, "the panda population has increased in the wild by 45 percent."

So that imaginary panda should go back to his imaginary typewriter and crank out another imaginary "Dear Dr. Schaller" letter, and if Schaller would let him, I'd have him add just a couple of extra words — nothing grand — but right at the end, I'd let the panda say something like, "Thank you."

George Schaller's newest essay and the panda field notes I showed you appear in a 2011 collection edited by Michael R. Canfield, from Harvard University Press. The book is called Field Notes on Science & Nature. Stephen Jay Gould's essay "How does the Panda fit?" can be found in his collection, An Urchin in the Storm: Essays About Books and Ideas.