Accessibility links
The Andy Advantage : Krulwich Wonders... As we all know, there are many ways to win a political contest, but money really matters. Money buys those TV ads, money pays those consultants, money buys attention. But here's an inexpensive way for candidates to boost their appeal.

Yes, I'm supposed to do sciencey things, but since it's the weekend, I'm going to join the pack and talk politics. Just this once. Politics and money.

As we all know, there are many ways to win a political contest, but money — money, money, money — really matters. Money buys those TV ads, money pays those consultants, money buys attention.

But here's the irony. I've just found an inexpensive way for candidates to boost their appeal, if only they would notice — and they should — because it's staring right at them every time they grab a load of 20s from the automatic teller machine. I mean, it's literally on the money.

What each of these candidates need is...Andy Jackson's hair.

As I will now demonstrate.

This is Andy Jackson with his lion's mane of hair, superimposed, or rather folded, onto President Grant. Grant looks fantastic when he's Jacksonized; suddenly he radiates power.

The hair is key. Take away Jackson's nose, face, eyes, and just leave the hair, and here's the result: Grant still looks good.

"But hey," you say, "that's Ulysses Grant. He'd look better with anybody's hair." Very well. How about we take the most admired, most loved President we've ever had, Abraham Lincoln, and give him "A Jackson"?

Nice, no? Jackson, of course, has that nose, those eyes, so of course he's going to make Lincoln look better, but even if we keep Lincoln's famously melancholy face, and just go with a "Jackson-hair-only-Lincoln", see what we get?

Suddenly Abe's got new moves in him. I imagine him flashing by on a skateboard. Andy Jackson's hair just does that for people.

Which is my whole point. Mitt, Newt, Rick, Rick, Jon and Ron could spend hours and hours raising money. Or, they could leap ahead of the pack with just one visit to the hairdresser. 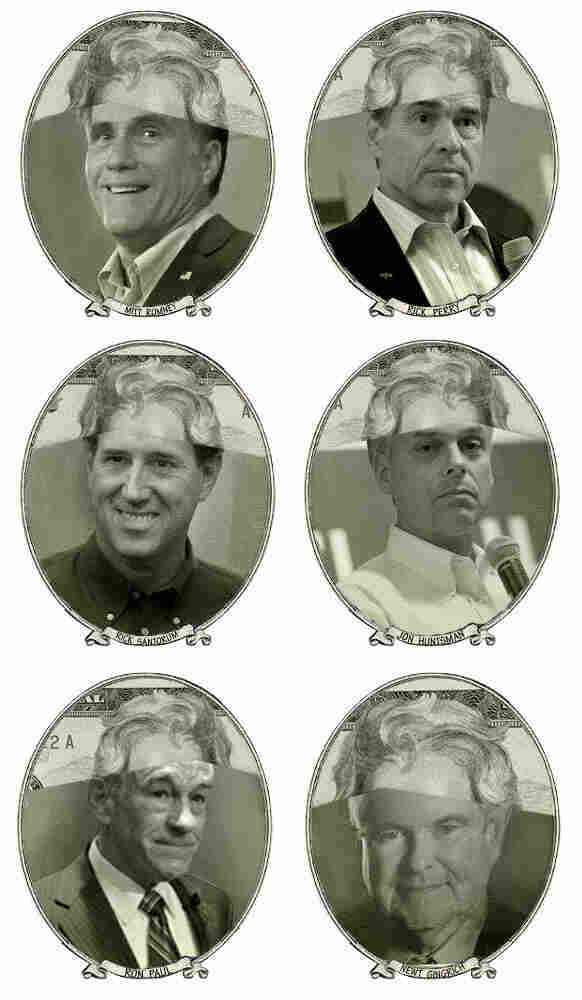 The Andy effect on the GOP candidates. Illustration by NPR hide caption

The only thing is, they can't all get a Jackson. Only one of them.

The first one who does it, will, I promise you, jump forward the haircutting equivalent of two primary victories. Jackson, by the way, not only won the elections of 1828 and 1832, he might have won a third time, in 1824, but the election was so close it was thrown to the House of Representatives, a body that apparently has never been dazzled by hair.

Special thanks to Edward Jenkins, whose mashups of different presidents on the currency we use in this essay. If you want to see more examples (he didn't dwell on General Jackson) go to his flickr site.