Accessibility links
The First Woman To Go 'Round The World Did It As A Man : Krulwich Wonders... For more than two years she traveled on a French naval vessel with linen bandages wrapped tightly around her upper body to flatten her chest. It was a small ship with 300 men who knew her as Jean. But she wasn't Jean. She was Jeanne. Then one day, they found her out.

She was the first woman ever to circumnavigate the globe, but she did it dressed as a man. For more than two years she traveled on a French naval vessel with linen bandages wrapped tightly around her upper body to flatten her chest. It was a small ship with 300 men who knew her as "Jean." But she wasn't Jean. She was Jeanne. Then one day, they found her out. 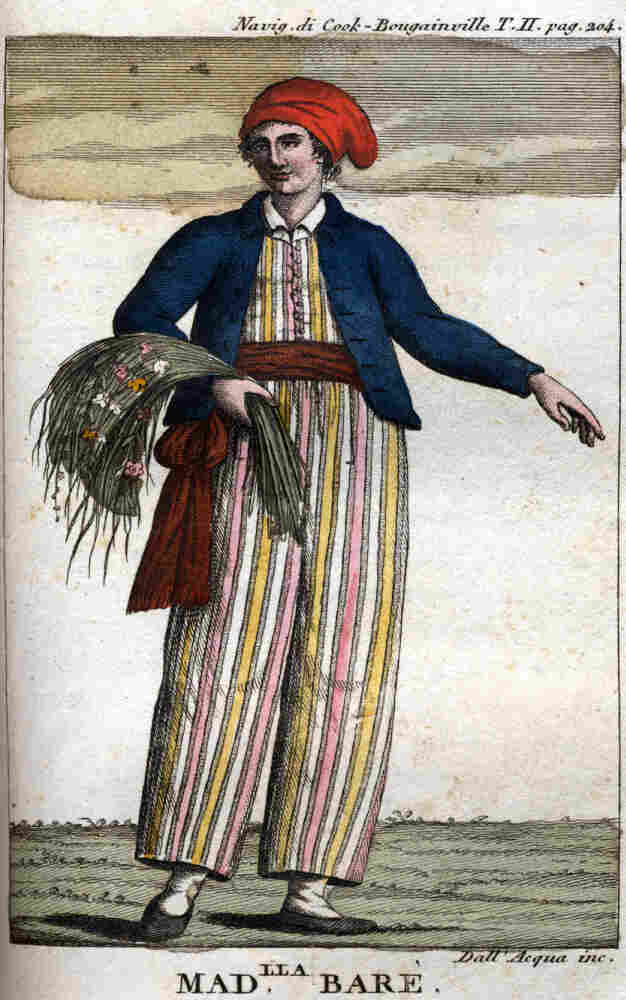 The first woman to go all the way around the world was born in France in 1740, in the Loire Valley. Her family taught her to identify plants to treat wounds and diseases and so she became "an herb woman," a peasant schooled in botanical medicine. In this she was not unusual. People didn't have to read or write to "botanize." Most of the learning was passed down orally. Jeanne Baret was, apparently, very good at it, and she was also very lucky. 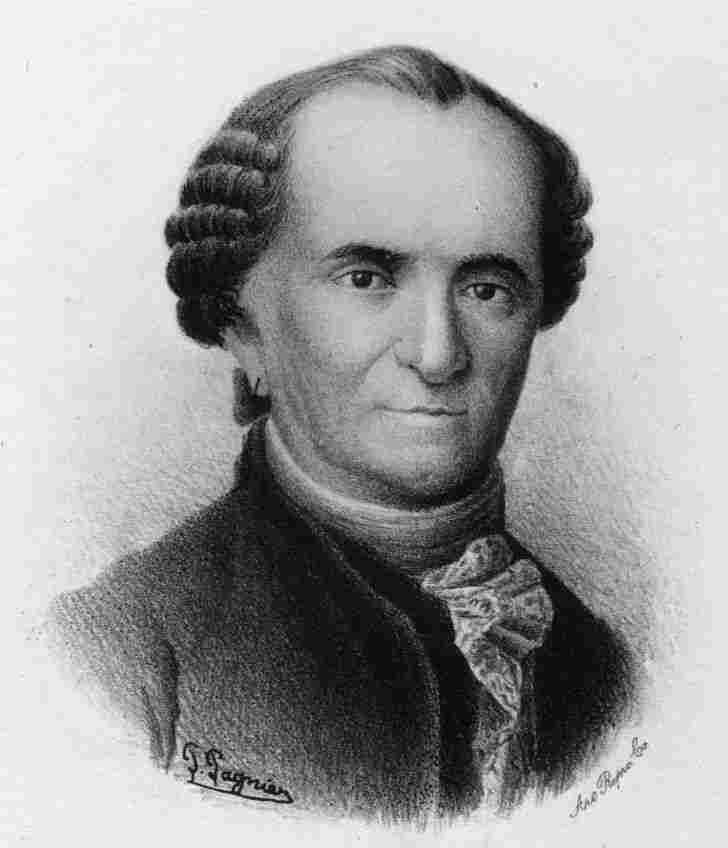 It turns out, in her neighborhood, there was a young man, a nobleman, whose young wife had died in childbirth, and one day, maybe while roaming the fields collecting plants — also his obsession — he met Jeanne. They began to collect together. He then hired her as his teacher, assistant and "all-around aide," says biographer Glynis Ridley. After that, she moved in and became his lover.

Two years later, they hatched a plan. The French government announced it would send two ships around the world to discover new territories for the glory of France, and they needed a plant hunter-botanist on board. Philibert de Commerson got the job. He, in turn, needed an assistant, and though the French Navy expressly prohibited women on its ships, Philibert agreed to dress Jeanne like a man. She (or, rather "he") would show up, as if by accident, at the gangplank on the day of departure, offer "his" services, and be hired on the spot. It was a bizarre, dangerous, crazy idea, but that's what they did, and it worked.

She was allowed to share a small cabin with Philibert, but they had to be careful. The chest bandages had to go on every day, which made it hard for her to take deep breaths, and the sailors began to notice that "Jean" never relieved himself with the rest of the crew, always carried a loaded pistol, and never, ever undressed with the others.

When pressed, Jean suggested that "he" had been captured by Ottoman Turks, that he'd been castrated, and that he was embarrassed to be seen publicly. That story had, at the time, a certain plausibility, plus "Jean" worked hard at the physical work on ship, and "he," not his boss, carried the tools, sacks and heavy wooden plant press, and did much of the exploring when hunting plants on land. So, for a while, he passed as a man.

Biographer Ridley says it was "Jean" who, when in Brazil, probably discovered the dazzling vine, all pink and mauve, that they named after their captain, Louis-Antoine de Bougainville, a plant that became their greatest find. 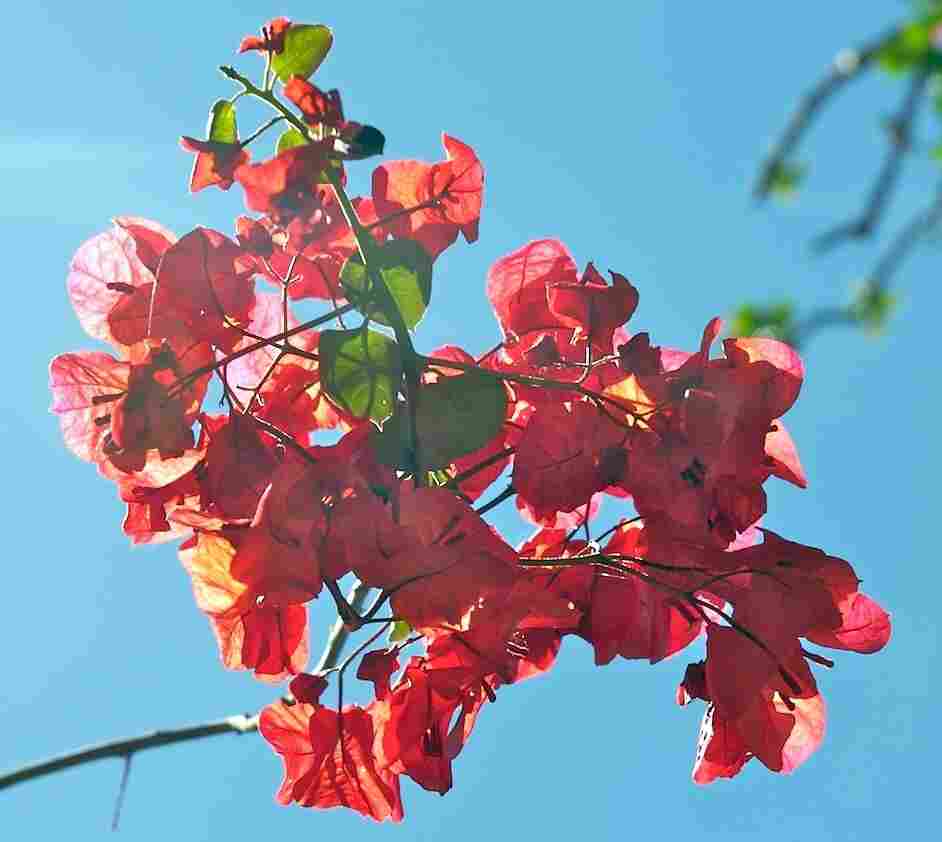 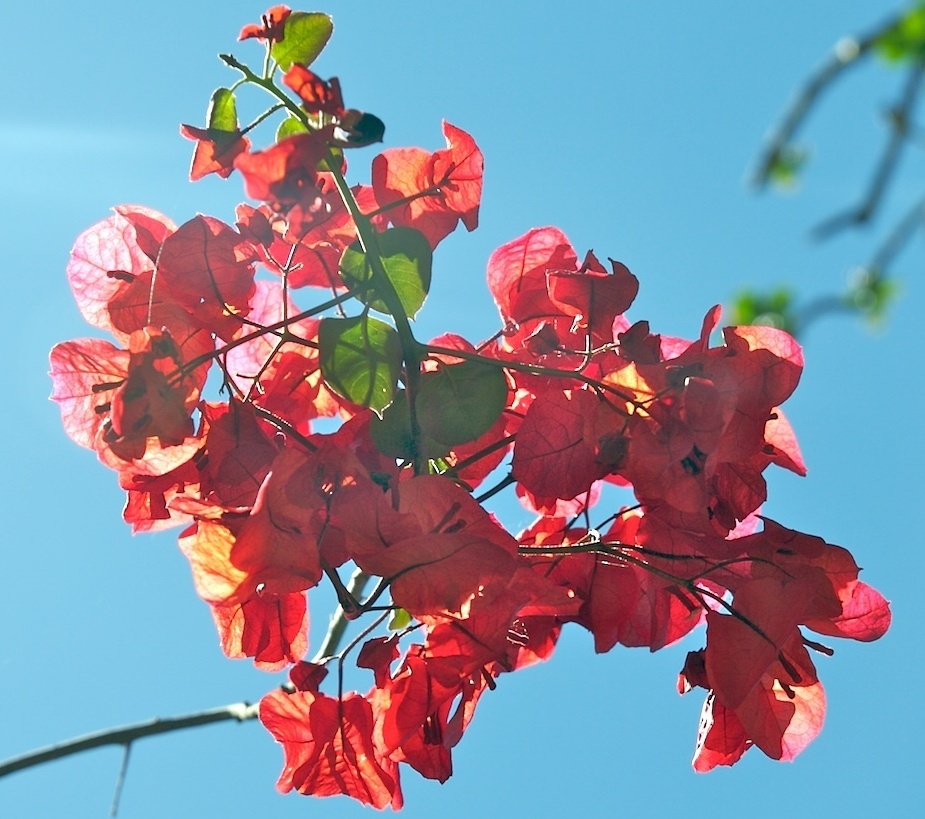 A year into the journey, the ruse was still working, though several members of the crew were more than suspicious. Still, gender can be a slippery thing when mixing cultures and company. There was a prince onboard this ship who insisted on wearing high-heeled shoes, green velvet and a wig — one of those piled-high, courtly wigs, filled with blond ringlets — even while tramping around the pebbled beaches of Tierra del Fuego.

High Heels On The Beach

One day when "Jean," Philibert, the prince and some officers were hiking along a beach, a group of Patagonians came by, gathered round the prince, and, writes Glynis Ridley:

...the Patagonian men and women began stroking his velvet jacket and pulling at the wig. As the prince tried to maintain his typical insouciance, officers moved quickly to save him from the inspection before the Patagonians started patting down his breeches.

The Patagonians, Philibert wrote in his diary, "thought the prince was a woman due to his youth and beauty," not suspecting that one of the men in the group was not a man. It's all very topsy-turvy when you think that these folks were often surrounded by 2-foot-tall Magellanic penguins zigzagging across the beach, dodging between people and enormous sea lions. Confusion often reigned.

How They Figured Out Jean Was Jeanne

It happened in the South Pacific. How it happened is in dispute. In her book, Glynnis Ridley gives several contradictory accounts. In one version, we are in Tahiti. "Jean" gets off the boat, and the Tahitians right away smell that she's a woman. (That's Capt. Bougainville's version.) They point, they exclaim, she confesses.

In the second version, a Tahitian visitor named Aotouru goes onboard the Etoile, "Jean's" ship, looks at "him," calls him a name, which the French translate as "girl," there's a hubbub and she's discovered. But, Ridley says, the word Aotouru used is not Polynesian for "girl"; it's their word for "transvestite," and what Aotouru was saying is, "Oh, here's a person who is cross-dressing. We have them, too." Either way, in these versions, the Tahitians tell the French the truth about this "sailor."

A third narrative, and this is the one Ridley favors, is that by the time the ship left Tahiti, a number of officers and probably many in the crew were pretty sure that Jean was really a Jeanne, and when they arrived at the next port of call, they waited till "Jean" was alone and unprotected by officers, grabbed her pistols, undressed her and then gang-raped her. True or not (and there is no hard evidence of such a crime, no suggestion of a rape in any of the diaries), she did go into seclusion after re-boarding the ship, and nine months later, she did have a baby.

However it happened, when the ship docked at the French colony of Mauritius, Capt. Bougainville arranged for Jean, now Jeanne, to be left with Philibert onshore. He clearly didn't want to return to France with an inexplicable and totally illegal mother and child to explain to naval authorities. Instead, everyone worked out a cover story that Philibert was needed on Mauritius by the French civil governor of the island and "had" to stay.

It's just a delicious extra tidbit that the French governor, the one who "ordered" the couple to stay, is the most famous person in this story. He was none other than Pierre Poivre, a French botanist who became, in English translation, the Peter Piper of "Peter Piper Picked a Peck of Pickled Peppers," the tongue twister that was published in 1813 as Peter Piper's Practical Principles of Plain and Perfect Pronunciation. In 1768, that Peter was Pierre Poivre, and he hadn't yet become immortal.

In any case, Jeanne and Philibert moved in with Pierre Poivre and spent seven years in Mauritius. She had her baby and gave it up for adoption. Philibert died. She (and by now she was definitely a she) married a French soldier, and together, she and her new husband sailed back to France.

Did Anyone Realize What She'd Done?

When she arrived sometime in late 1774 or 1775, she became the first woman known to have circumnavigated the globe. There was no one at the dock to welcome her. No one (except perhaps her husband) knew what she had done, but she'd done it. 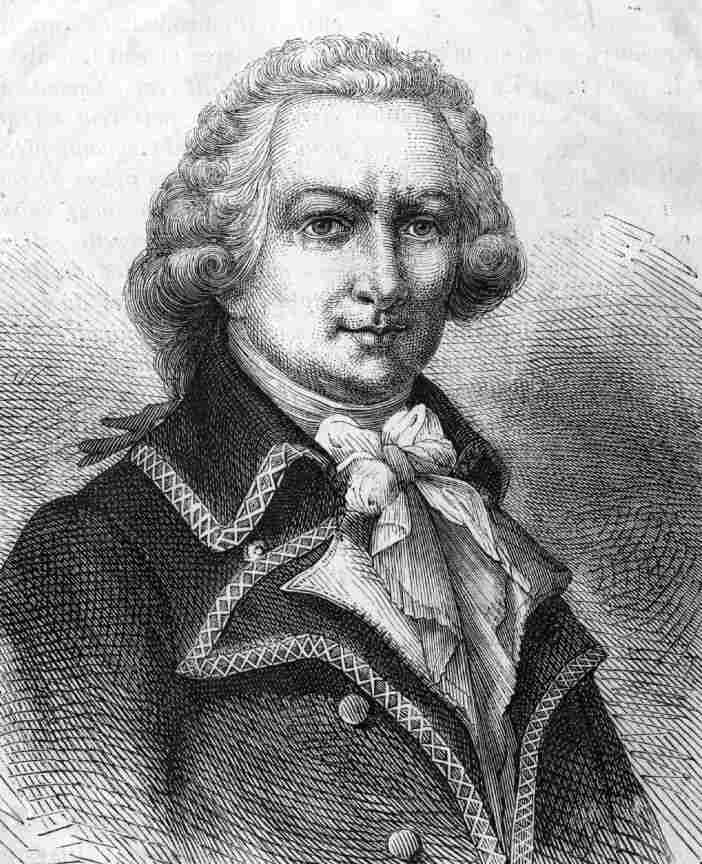 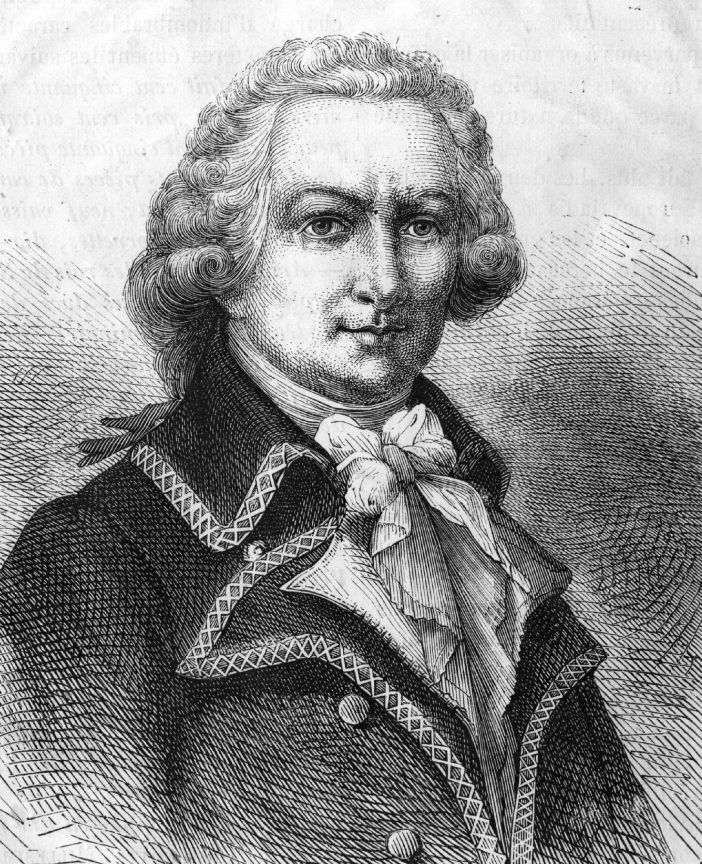 Still, she wasn't entirely ignored. Her lover's family, the Commerson family, honored her contract and paid her a handsome sum for her services, but most surprisingly, unbidden, the French Navy bestowed "upon this extraordinary woman" a pension of 200 livres per annum for her work gathering plants. Ridley figures she must have had a secret admirer. And her guess is, it was Capt. Bougainville, whose name has been famous ever since.

But the last word should go to the Prince of Nassau-Siegen, the young gentleman in velvet and heels who hiked with her. In his memoirs, he says of Jeanne Baret:

I want to give her all the credit for her bravery, a far cry from the gentle pastimes afforded her sex. She dared confront the stress, the dangers, and everything that happened that one could realistically expect on such a voyage. Her adventure, should, I think, be included in a history of famous women.

And one day, I think, she will be famous.

Glynnis Ridley's biography of Jeanne Baret was published in 2010. It's called The Discovery of Jeanne Baret, A Story of Science, The High Seas, And The First Woman To Circumnavigate The Globe.