Accessibility links
'Rasputin Was My Neighbor' And Other True Tales Of Time Travel : Krulwich Wonders... There are people who live long enough to create a link — a one-generation link — to figures from what feels like a distant past. And their presence among us shrinks history.

'Rasputin Was My Neighbor' And Other True Tales Of Time Travel

'Rasputin Was My Neighbor' And Other True Tales Of Time Travel

He was old, but not ancient, the man next to us at the delicatessen. It was 1973. My then girlfriend (now wife) and I had ordered dinner and this old guy, sitting by himself, seemed lonely, so we got talking and he told us how he had grown up in St. Petersburg, Russia, and that when he was a boy, his next-door neighbor was a famous man, a really famous man.

We asked, "Who was it?" And he said, "Have you ever heard of the mad monk, Rasputin?" 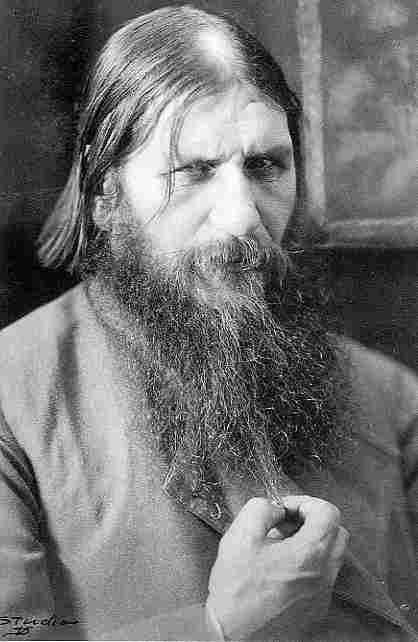 I knew of Rasputin. He'd lived, I'd thought, in a Russian palace with the Romanov czar, Nicholas II, and had magically healed the czar's son from a supposedly incurable disease, then gained great sway over the Romanov family, and then, in a ghastly scene, was shot, clubbed and poisoned to death by a group of noblemen just before the start of the Russian Revolution. In my mind, all this happened in a different age. The pictures I'd seen showed him with a 19th century beard, dressed in robes.

How could somebody talking to me in a diner on 7th Avenue have also talked to somebody that ancient? It just didn't seem possible. Yet the old guy said, "Rasputin and my dad were friends. He used to come over for tea."

I thought about it. Rasputin was assassinated in 1916. A 70-year-old man in 1973 would have been 13 when Rasputin was alive. It was not inconceivable that this guy had actually met Rasputin.

There are people who live long enough to create a link — a one-generation link — to figures from what feels like a distant past, and their presence among us shrinks history. When "Long Ago" suddenly becomes "So I said to him ...," long ago jumps closer.

There are many examples of people who shrink history this way. The blogger Jason Kottke has been collecting examples. He calls them "human wormholes," because these people help us leap across space/time. Here are my favorites.

In 1956, on the game show I've Got A Secret, host Garry Moore brought on 96-year-old Samuel Seymour. Here's his secret: He was sitting in Ford's theater the night Lincoln was shot. He was 5 years old and remembered John Wilkes Booth bounding from Lincoln's box onto the stage. Here he is on television, describing what he saw:

Tony Hiss, son of Alger Hiss, says that when his dad clerked for Oliver Wendell Holmes, he remembers Justice Holmes saying that as a kid, his grandmother used to talk of the day at the beginning of the American Revolution when she was 5 years old and stood at her dad's front window on Beacon Hill in Boston and watched "rank after rank of Redcoats marching through town." So that's grandma to grandson to us. Two bounces.

3. President John Tyler Has Two Grandsons Who Are Still Alive! 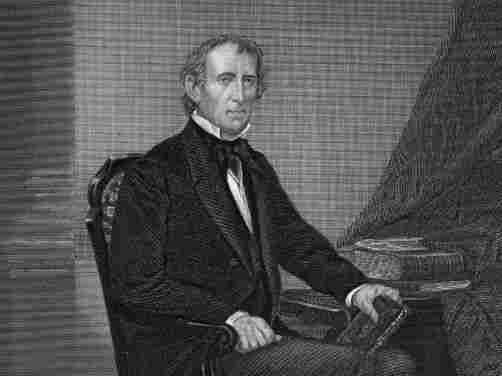 President John Tyler, born in 1790, tenth president of the United States, has two grandsons who are reportedly still alive today. One, Harrison Tyler, lives in Virginia and recently gave an interview to New York magazine. He was asked how someone born in 1790 could still have living grandchildren. Said Harrison:

Well, [President Tyler] was a good man! [laughs] Both my grandfather — the president — and my father, were married twice. And they had children by their first wives. And their first wives died, and they married again and had more children. And my father was 75 when I was born, his father was 63 when he was born. John Tyler had 15 children — eight by his first wife, seven by his second wife — so it does get very confusing.

Does he ever tell tourists at President Tyler's home (his, too) that he's a grandson? And do people believe him? Said he:

Three Civil War widows, Maudie Hopkins, Alberta Martin and Gertrude Janeway, lived into the 21st century. Two of them collected their husbands' pensions until their deaths.

Alberta Martin, for example, married a Confederate veteran when he was 81, she 21. They married in 1927, after which she shared a $50-a-month Confederate pension, guaranteed by the State of Alabama. When her husband died and she'd remarried, the checks stopped coming. Alabama, presumably, had lost track of her, then presumed her (and all other Confederate widows) dead, but with assistance from the Sons of Confederate Veterans, Alberta's pension rights were restored in 1996, she was awarded back-pay and she continued to collect her husband's pension until she died in May, 2004, 139 years after the Civil War had ended. 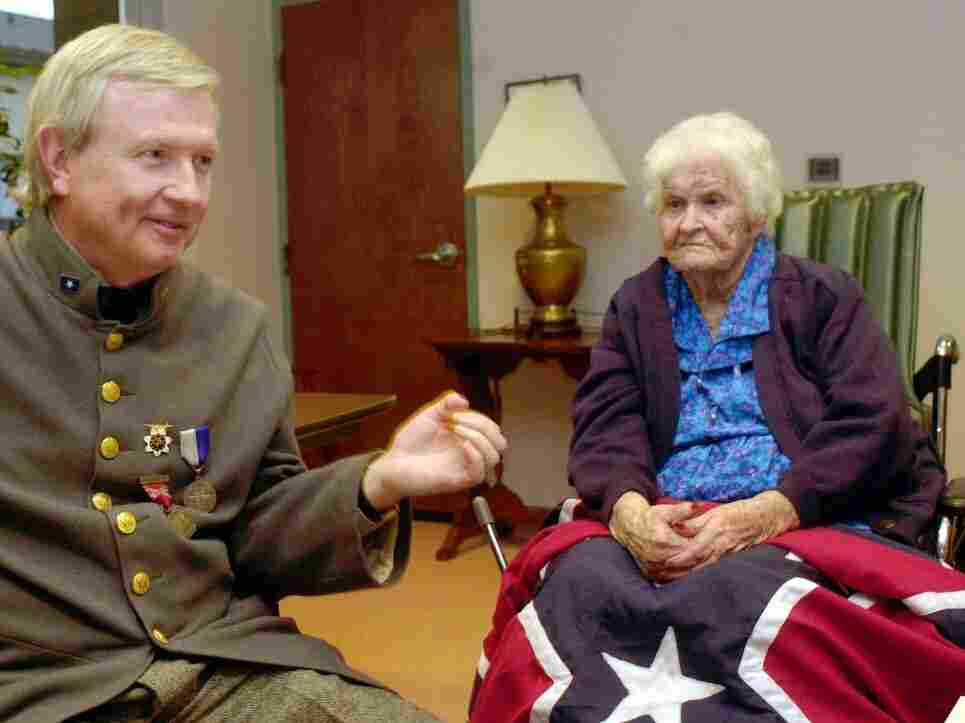 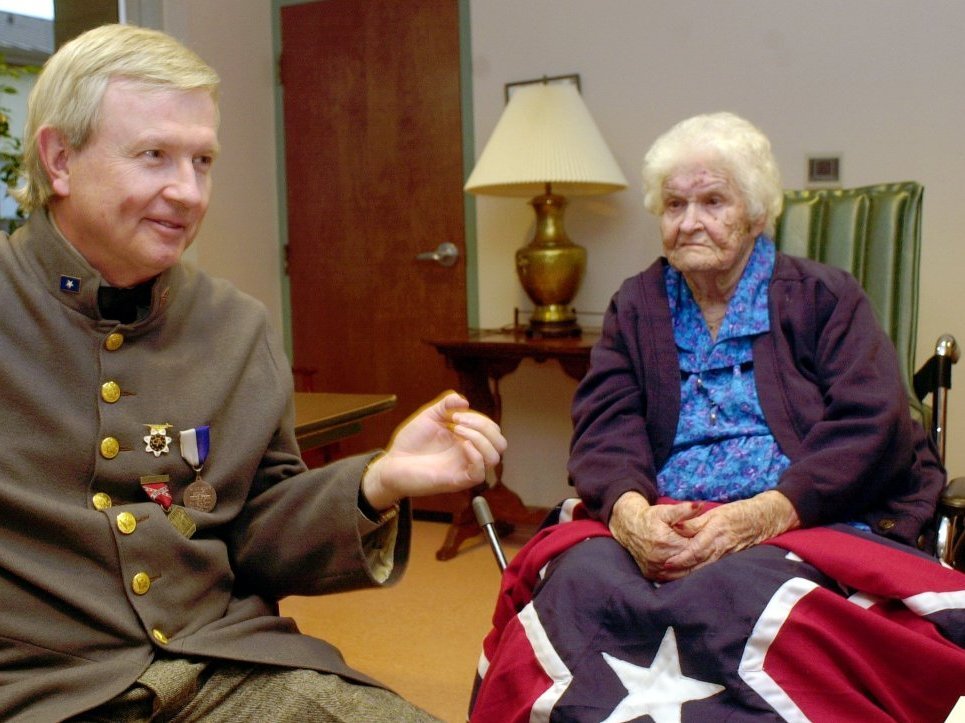 My first real job in New York City, I worked in the city's Municipal Building, and down the hall from my office was a room reserved for Civil War veterans. That room was always dark, the door always locked, nobody visited. The war, at that time, was 100 years past. Then one day a crew of workmen showed up and began removing what was inside: a bunch of regimental flags, photographs, ceremonial cups, badges — this gathering place no longer gathered, so it, and all the things in it, were carted off, I suppose, to a museum. I thought: Now, our Civil War is over. Demographically over. It has stopped touching the living.

But I didn't know about Maudie, Alberta and Gertrude. They weren't over — so through them, the past dangled into the present for another ... wow ... 40 years.

If you want to consider another way to time travel — this time using a mental trick that works wonders — check out a post I wrote a few years ago called "The Junkman And The Madonna."