Accessibility links
Calvin And Hobbes, Add The Bacon : Krulwich Wonders... When Bill Watterson stopped drawing "Calvin and Hobbes" in 1995, everyone noticed. But the brothers behind the webcomic "Pants Are Overrated" reprised the characters in a homage to Calvin, and added a new character, too.

Dan and Tom Heyerman stopped drawing "Pants are Overrated" late in 2011. I noticed.

The Heyermans' online comic strip was about two brothers who know much too much about each other (not surprising, since Dan and Tom are in fact, brothers), who get comfortable by throwing off their office clothes — especially pants — and spend time having wonderfully meaningless, insignificant adventures.

Enlarge this image
Pants are Overrated

Dan, for example, would fall in love not with a girl but with his Canon camera and try to kiss it on the lens when his brother isn't looking. That kind of thing.

The strip was fun — actually pretty good — and then one day, out of the blue, they concocted something that made me gasp. They decided to update Watterson's "Calvin and Hobbes" strip, by imagining Calvin as a grown-up, 26 years after his being 6. That would make him 32, And in their imaginations, he's married the girl up the block, Susie Derkins, and they now have a little girl. Her name is Bacon. 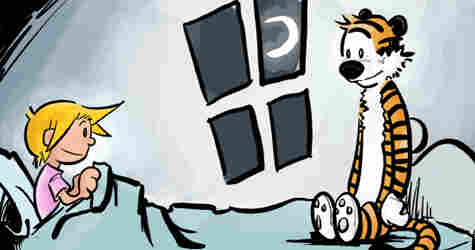 Enlarge this image
Pants are Overrated 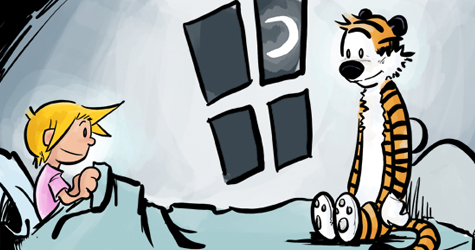 Bacon, named for Sir Francis Bacon, an enlightenment scientist, is also 6, Calvin's age. And Hobbes, of course, is still a working tiger/philosopher, who comes to life for Those Who Believe In Him.

These attempts to reimagine the classics rarely work, because classics are classic. What Bill Watterson did for 10 years was genius. The brothers know it. Plus, their homage was a trespass; loving, yes, but unauthorized, and lord knows what Watterson would think of it. But the thing is, they somehow got close.

We All Miss Calvin

They did only two strips, called "Hobbes and Bacon" (see my earlier blog post), which went instantly viral. Sure, some people screamed, "How dare you!" but many more just sighed, "Oh, my ... oh yes ..." We all miss Calvin. And like bedtime chocolates on your hotel pillow, how could we not gobble up these two little sweets, wonderfully called "Bacon."

Just two. Then, Dan and Tom went back to their brotherly adventures, until last fall, when they decided, like Bill, to retire. They announced the end of "Pants are Overrated" in September, and then, in October, just before disappearing, they gave us two more.

I know, I know. I shouldn't. They shouldn't. We shouldn't look. We should respect our hero Bill. But I am weak. And these two strips made me tear up a little, and think, "Oh my ... oh yes."

And then there's this one, which got to me because I secretly suspect that when Calvin is 80 years old, he will, in some essential way, still be Calvin.