Accessibility links
Is The 'Right To Be Forgotten' The 'Biggest Threat To Free Speech On The Internet'? : Krulwich Wonders... A privacy law taking shape in Argentina and the European community could fundamentally reshape how we think about Internet privacy and the sharing and reposting of content online.

Is The 'Right To Be Forgotten' The 'Biggest Threat To Free Speech On The Internet'?

Is The 'Right To Be Forgotten' The 'Biggest Threat To Free Speech On The Internet'?

This Is Yesica, the tipsy one on the right. She's a Sports Illustrated swimsuit model from Argentina. She is very nice to look at. 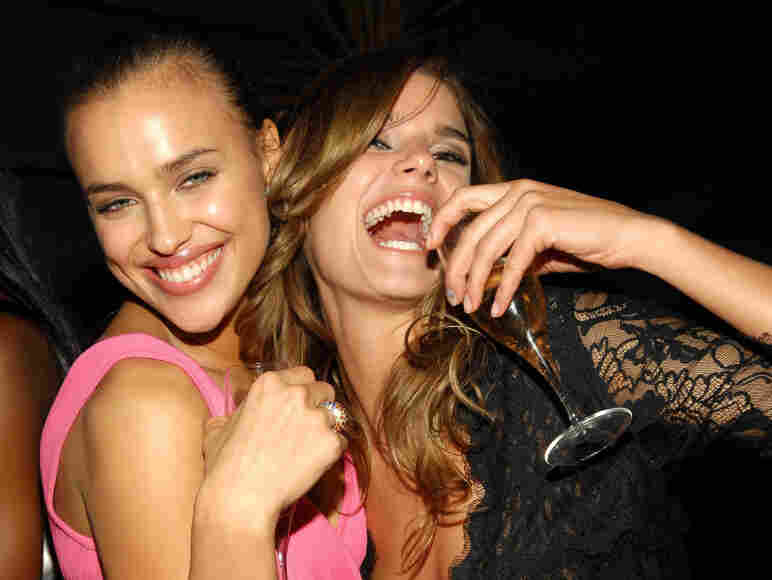 But if you live in Argentina, you can't look at her. Put Yesica's name in Yahoo Argentina and what do you get? You get nothing. A blank. She's not there.

Yesica and her lawyers have exercised a legal right now dubbed the "Right to Be Forgotten" that allows you to remove embarrassing pictures or information you put on the Web — and do it permanently, totally. Which means you can tell Yahoo or Google or Facebook, "I don't want that there anymore. I want this to be forgotten. You have the image or the email or whatever in your computers. Remove it. And if you don't, you are breaking the law."

Yesica demanded that Yahoo remove certain pictures, and presumably a court has ordered Yahoo! to block "Yesica" searches while the two sides appeal.

Argentina is not the only place with a Right to Be Forgotten. Last month, 27 nations in the European community announced new legislation that would make it the law across Europe.

Immediately, lawyers, especially American lawyers, and particularly lawyers who defend free speech, began to holler. Writing in the Stanford Law Review, professor Jeffrey Rosen of George Washington University said the proposed European legislation will seriously alter the structure of the Internet, damage companies like Google, Yahoo and Facebook, but much more important, this legislation in its present form, he says, "represents the biggest threat to free speech on the Internet in the coming decade."

Let's start with those who favor the law: Viviane Reding, vice president of the European Commission, argues that everything we do — our emails, our blog comments, our e-purchases, our porn watching, the tickets we buy, the photos we share — all of it is sitting in databases controlled in the great "cloud." That information can, and probably will, stay in those computers forever. Yes, we put it there when we chose to search for free, mail for free and shop online, but surely, says Ms. Reding, we should retain some control over that information. After all, it's ours (or was), and we should keep some legal right to erase the stupid, hurtful, dumb things we did or said online. I mean, why not?

Because, says Jeffrey Rosen, this law, when made operational, very quickly runs amok. I'm going to paraphrase his argument, step by step.

Forget That, Step One

Step One: You get drunk one night and take a picture of yourself half-naked, and post it on your Facebook wall. Dumb idea, yes, but once up, it is reposted on 10 other sites, all Facebook friends. Next morning, you think, "What have I done?" You call Facebook and say, "I have just removed this picture from my site, now I want you to erase that photo so it doesn't exist in any of your servers, now and forevermore."

If Facebook balks, or doesn't remove it, there will be a fine and maybe criminal prosecution.

Any problem with this? Mr. Rosen says no, this seems reasonable and is what most Internet companies promise anyway. A law just holds them to it. So far, he's got no issues.

But now comes Step Two: You decide to visit your friends' Facebook pages, and ohmygod, when you look, you are still up there, still half-naked on Amy's wall, Andy's wall, Alice's wall, Tommy's wall, Albert's wall. They didn't take the image down.

So now you go to Facebook and you say, like Ronald Reagan at the Berlin Wall, "Mr. Facebook, tear down those pictures!" And suppose that Facebook follows orders, and notifies Amy, Andy, Alice, Tommy and Albert, and two of them are off camping, one's in the hospital, and one loves the picture and won't permit Facebook to take it down.

Should the law require Facebook to remove images from customer sites without their permission? Just because you are upset? Whose pictures are they anyway, now that they've migrated off your page? Whose feelings should Facebook honor? Internet companies want to be neutral players, like a highway; they don't want to have to adjudicate between friends. That's what mothers and courts are for. The proposed European law, Rosen argues, seems to require Facebook to become such a judge, to act and to act speedily on the aggrieved party's behalf. He argues that those companies aren't remotely equipped to do that. They are tech companies; they hire engineers, not judges.

OK, on to Step Three. Suppose you — the once drunk and half-naked one — are dating the mayor of the city, so you are, in a way, a public figure, and that image of you would be of enormous interest to voters, reporters, politicians and gossips all over town. Should Facebook keep your photo a secret now?

What if you have only dated the mayor twice, so interest in you is minimal? Different decision? Who decides? Facebook?

When Forgetting Clashes With Free Speech

You see how hard this is getting? And these aren't fables, stories like this.

Rosen describes a real case in Germany where two men murder someone, go to trial, get convicted, serve their time, get released, and when they leave jail they look up their famous victim's name on Wikipedia, and there they are, named as his killers. They sue Wikipedia's parent company saying, in effect, "We've been to jail, paid our debt to society, we want this incident forgotten. So remove our names, not just from the German Wikipedia, take us out of all the Wikipedias."

In America, they'd be thrown out of court. We don't erase people out of history because they have a Right to Be Forgotten. That's a little too Orwellian. ("He who controls the past controls the future.") But privacy has more sway in Europe, and criminals in Germany do get their names expunged in certain circumstances. That case is still being argued.

'The Biggest Threat To Free Speech On The Internet'

Rosen says that this law is too vague and that Internet companies, faced with fines or criminal prosecution, may feel compelled to yank pictures from customer sites, erase images that should be public because the law's main aim is to protect people who've done dumb things and don't want to be haunted all their lives by one stupid moment.

But there are other values: the public's right to know, freedom of the press, the right of artists to appropriate images. And then there's the Don't Be Such a Wuss school, represented by this Internet comment from someone called "Undying Cincinattus":

"To be honest, if people are stupid enough to give their entire life story and every private detail over to the public domain of Facebook, across all of their friends' profiles and into dozens of groups run by private businesses, they should not be surprised if there is some trouble getting rid of the evidence."

I guess that's right, but as the European authors say, it's also right that if I have one stupid night, the evidence shouldn't be allowed to tick like a bomb forever in a computer somewhere, out of my reach, out of my control. Most of the time, erasing that photo isn't going to bother anyone. Some of the time, it will. Surely there must be a middle ground here.