Accessibility links
Six-Legged Giant Finds Secret Hideaway, Hides For 80 Years : Krulwich Wonders... The insect is so large — as big as a human hand — it's been dubbed a "tree lobster." Presumed extinct, some enterprising entomologists found them on a barren hunk of rock in the middle of the ocean.

No, this isn't a make-believe place. It's real. 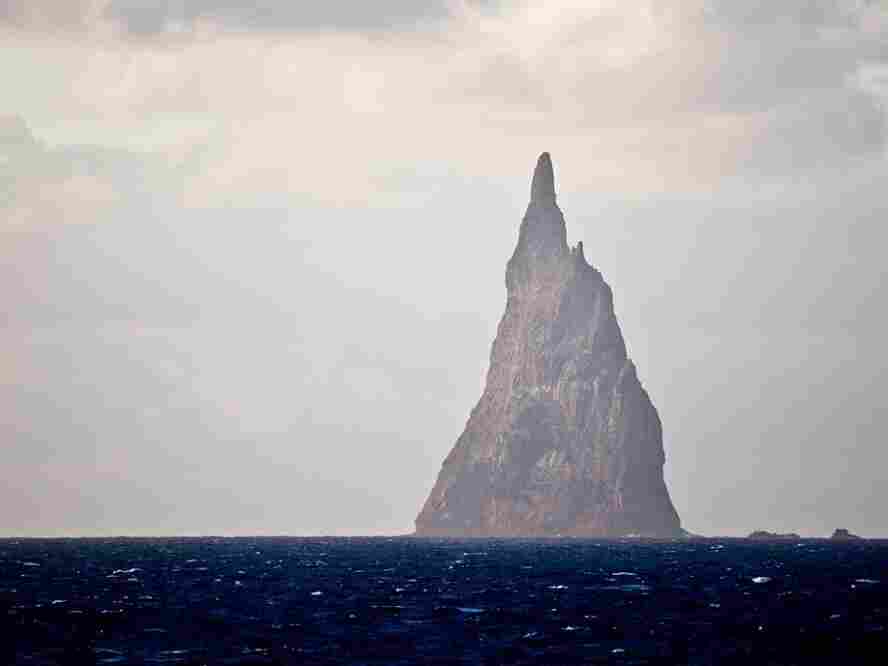 They call it "Ball's Pyramid." It's what's left of an old volcano that emerged from the sea about 7 million years ago. A British naval officer named Ball was the first European to see it in 1788. It sits off Australia, in the South Pacific. It is extremely narrow, 1,844 feet high, and it sits alone.

What's more, for years this place had a secret. At 225 feet above sea level, hanging on the rock surface, there is a small, spindly little bush, and under that bush, a few years ago, two climbers, working in the dark, found something totally improbable hiding in the soil below. How it got there, we still don't know. 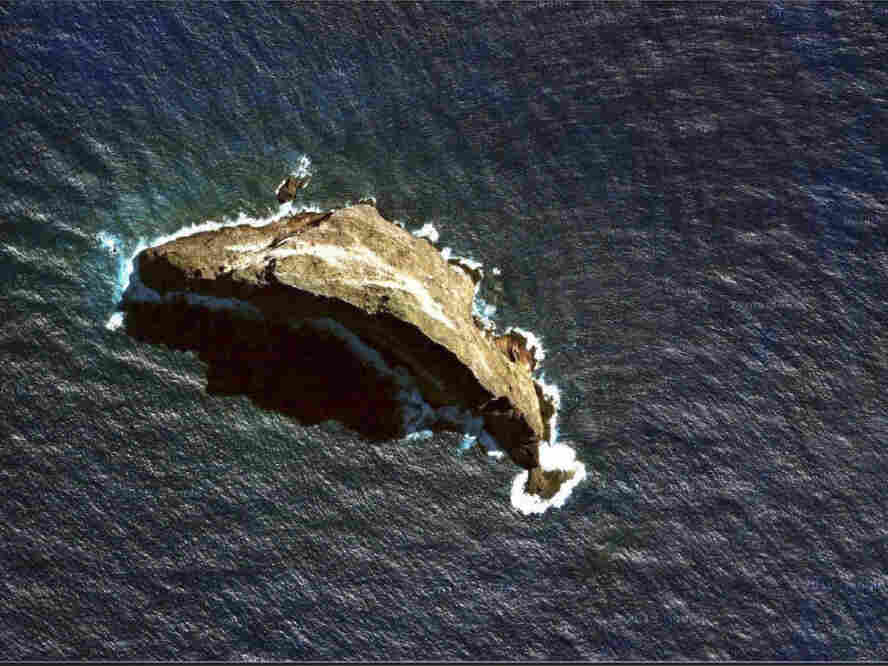 A satellite view of Ball's Pyramid in the Tasman Sea off the eastern coast of Australia. Google Maps hide caption

Here's the story: About 13 miles from this spindle of rock, there's a bigger island, called Lord Howe Island.

On Lord Howe, there used to be an insect, famous for being big. It's a stick insect, a critter that masquerades as a piece of wood, and the Lord Howe Island version was so large — as big as a human hand — that the Europeans labeled it a "tree lobster" because of its size and hard, lobsterlike exoskeleton. It was 12 centimeters long and the heaviest flightless stick insect in the world. Local fishermen used to put them on fishing hooks and use them as bait. 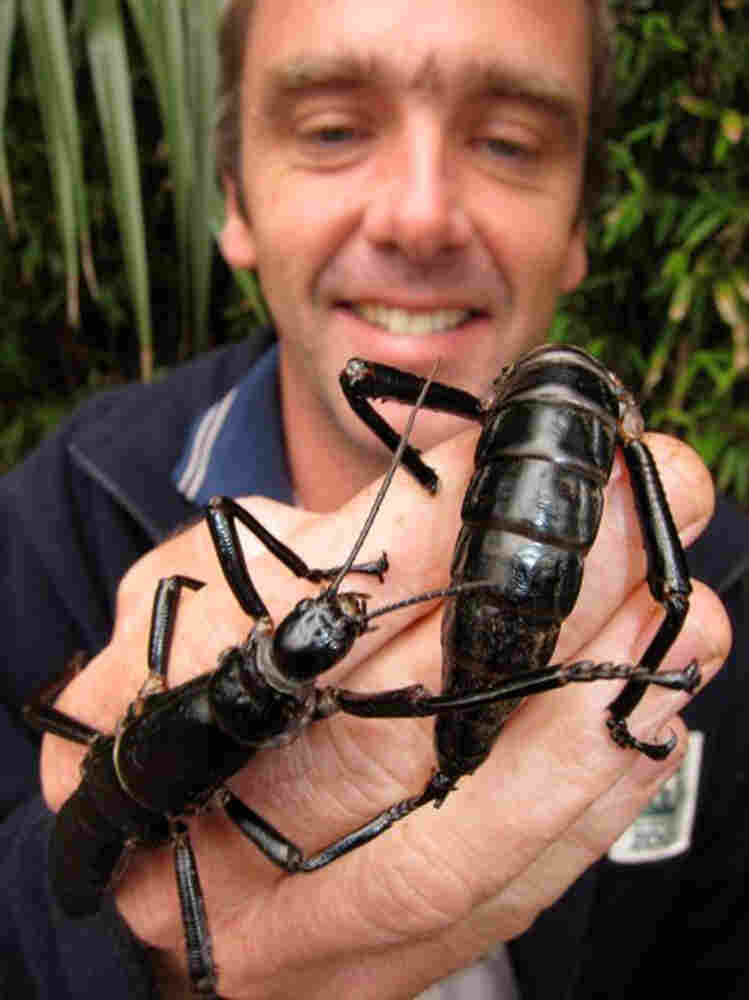 Then one day in 1918, a supply ship, the S.S. Makambo from Britain, ran aground at Lord Howe Island and had to be evacuated. One passenger drowned. The rest were put ashore. It took nine days to repair the Makambo, and during that time, some black rats managed to get from the ship to the island, where they instantly discovered a delicious new rat food: giant stick insects. Two years later, the rats were everywhere and the tree lobsters were gone.

Totally gone. After 1920, there wasn't a single sighting. By 1960, the Lord Howe stick insect, Dryococelus australis, was presumed extinct.

There was a rumor, though.

Some climbers scaling Ball's Pyramid in the 1960s said they'd seen a few stick insect corpses lying on the rocks that looked "recently dead." But the species is nocturnal, and nobody wanted to scale the spire hunting for bugs in the dark.

Fast forward to 2001, when two Australian scientists, David Priddel and Nicholas Carlile, with two assistants, decided to take a closer look. From the water, they'd seen a few patches of vegetation that just might support walking sticks. So, they boated over. ("Swimming would have been much easier," Carlile said, "but there are too many sharks.") They crawled up the vertical rock face to about 500 feet, where they found a few crickets, nothing special. But on their way down, on a precarious, unstable rock surface, they saw a single melaleuca bush peeping out of a crack and, underneath, what looked like fresh droppings of some large insect.

Where, they wondered, did that poop come from?

The only thing to do was to go back up after dark, with flashlights and cameras, to see if the pooper would be out taking a nighttime walk. Nick Carlile and a local ranger, Dean Hiscox, agreed to make the climb. And with flashlights, they scaled the wall till they reached the plant, and there, spread out on the bushy surface, were two enormous, shiny, black-looking bodies. And below those two, slithering into the muck, were more, and more ... 24 in all. All gathered near this one plant.

They were alive and, to Nick Carlile's eye, enormous. Looking at them, he said, "It felt like stepping back into the Jurassic age, when insects ruled the world." 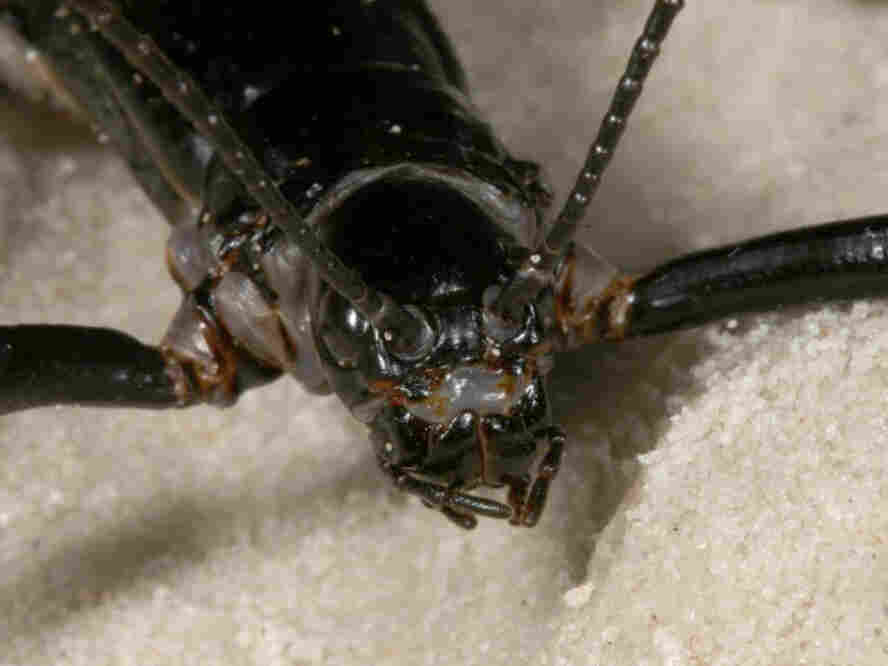 They were Dryococelus australis. A search the next morning, and two years later, concluded these are the only ones on Ball's Pyramid, the last ones. They live there, and, as best we know, nowhere else.

How they got there is a mystery. Maybe they hitchhiked on birds, or traveled with fishermen, and how they survived for so long on just a single patch of plants, nobody knows either. The important thing, the scientists thought, was to get a few of these insects protected and into a breeding program.

That wasn't so easy. The Australian government didn't know if the animals on Ball's Pyramid could or should be moved. There were meetings, studies, two years passed, and finally officials agreed to allow four animals to be retrieved. Just four. 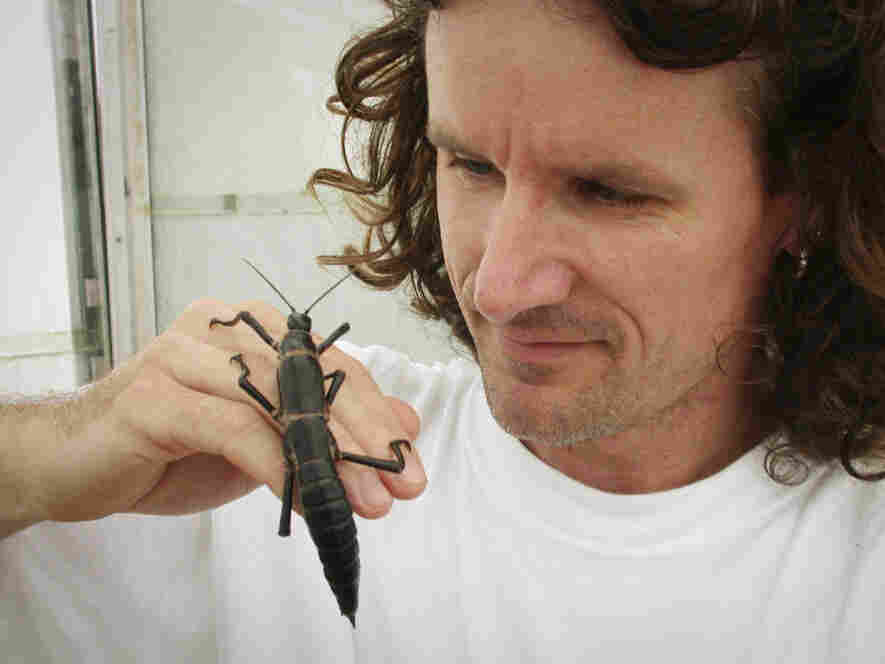 When the team went back to collect them, it turned out there had been a rock slide on the mountain, and at first they feared that the whole population had been wiped out. But when they got back up to the site, on Valentine's Day 2003, the animals were still there, sitting on and around their bush.

The plan was to take one pair and give it to a man who was very familiar with mainland walking stick insects, a private breeder living in Sydney. He got his pair, but within two weeks, they died.

Adam And Eve And Patrick

That left the other two. They were named "Adam" and "Eve," taken to the Melbourne Zoo and placed with Patrick Honan, of the zoo's invertebrate conservation breeding group. At first, everything went well. Eve began laying little pea-shaped eggs, exactly as hoped. But then she got sick. According to biologist Jane Goodall, writing for Discover Magazine:

"Eve became very, very sick. Patrick ... worked every night for a month desperately trying to cure her. ... Eventually, based on gut instinct, Patrick concocted a mixture that included calcium and nectar and fed it to his patient, drop by drop, as she lay curled up in his hand."

Her recovery was almost instant. Patrick told the Australian Broadcasting Company, "She went from being on her back curled up in my hand, almost as good as dead, to being up and walking around within a couple of hours."

Eve's eggs were harvested, incubated (though it turns out only the first 30 were fertile) and became the foundation of the zoo's new population of walking sticks.

When Jane Goodall visited in 2008, Patrick showed her rows and rows of incubating eggs: 11,376 at that time, with about 700 adults in the captive population. Lord Howe Island walking sticks seem to pair off — an unusual insect behavior — and Goodall says Patrick "showed me photos of how they sleep at night, in pairs, the male with three of his legs protectively over the female beside him." 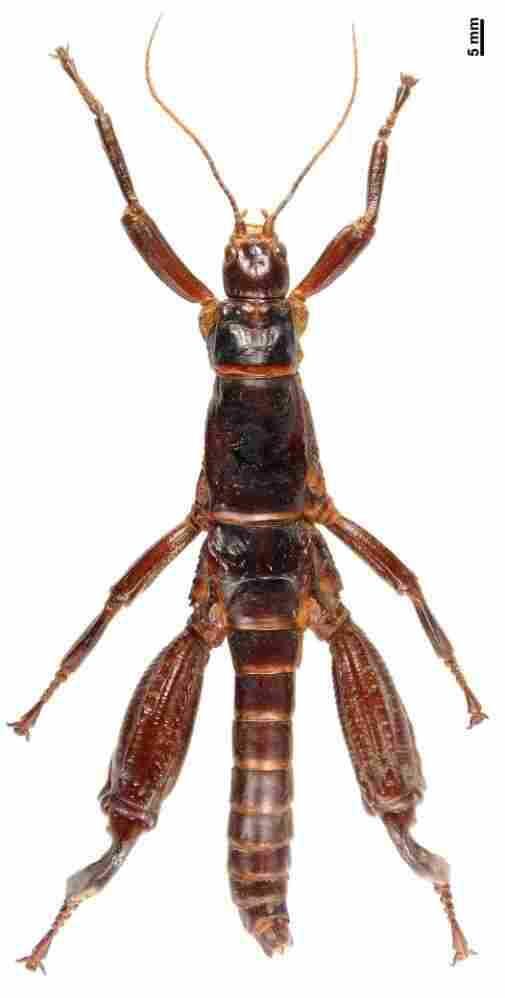 Now comes the question that bedevils all such conservation rescue stories. Once a rare animal is safe at the zoo, when can we release it back to the wild?

On Lord Howe Island, their former habitat, the great-great-great-grandkids of those original black rats are still out and about, presumably hungry and still a problem. Step one, therefore, would be to mount an intensive (and expensive) rat annihilation program. Residents would, no doubt, be happy to go rat-free, but not every Lord Howe islander wants to make the neighborhood safe for gigantic, hard-shell crawling insects. So the Melbourne Museum is mulling over a public relations campaign to make these insects more ... well, adorable, or noble, or whatever it takes.

They recently made a video, with strumming guitars, featuring a brand new baby emerging from its egg. The newborn is emerald green, squirmy and so long, it just keeps coming and coming from an impossibly small container. Will this soften the hearts of Lord Howe islanders? I dunno. It's so ... so ... big.

But, hey, why don't you look for yourself?

What happens next? The story is simple: A bunch of black rats almost wiped out a bunch of gigantic bugs on a little island far, far away from most of us. A few dedicated scientists, passionate about biological diversity, risked their lives to keep the bugs going. For the bugs to get their homes and their future back doesn't depend on scientists anymore. They've done their job. Now it's up to the folks on Lord Howe Island.

Will ordinary Janes and Joes, going about their days, agree to spend a little extra effort and money to preserve an animal that isn't what most of us would call beautiful? Its main attraction is that it has lived on the planet for a long time, and we have the power to keep it around. I don't know if it will work, but in the end, that's the walking stick's best argument: