Accessibility links
The Three Little Pigs And The Future Of Journalism : Krulwich Wonders... In an action-packed, two-minute remake of the classic tale, The Guardian of London introduces us to "Open Journalism," where newsgatherers are inviting readers to participate in the increasingly raw and loud new media landscape.

The Three Little Pigs And The Future Of Journalism

The Three Little Pigs And The Future Of Journalism

You remember the three little pigs, right? The ones who get chased by a huffing, puffing big, bad wolf? 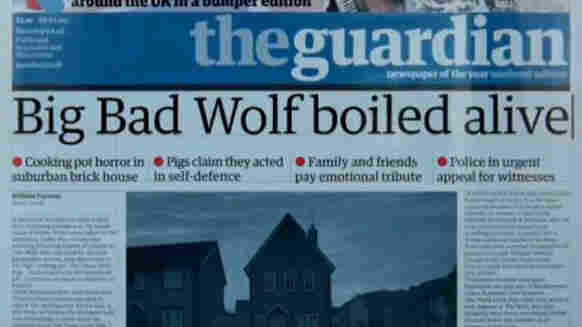 You may recall that story ends when the wolf, unable to flatten the brick house, slides down the chimney, hoping to snatch the piggy brothers huddling inside. The third little pig, however, has placed a scalding pot of water at the chimney bottom, turning B.B. Wolf, alas, into Hairy Wolf Soup.

That's the traditional version. It's simple and clear.

The wolf is bad. The three pigs are innocent. Two are lazy. But the third, a hard-working, bricklaying, water-boiling pig — he triumphs. Hooray for industry! For cleverness! End of story.

This week I saw a new version of this tale. It's a video produced, strangely enough, by a newspaper, The Guardian of London. It's the same story, but this time the three pigs and Mr. Wolf huff and puff through a big modern city with lots of newspapers, radio stations, TV channels, plus the Internet. It's a media center, the kind of town where headlines clash, sensation rules and no story stays simple. Reporters and bloggers debate every "fact," doubt motives, question everything. (Or maybe they appreciate nuance; or maybe they've got nothing better to do.) There are wolf defenders, pig skeptics.

In this retelling, which lasts an action-packed two minutes, nobody's a hero, not even our clever pig.

Can Wolf Boiling Ever Be Justified?

The video begins with a police raid on the pig's brick house. Why? Well, he has just boiled a live wolf in a scalding pot of water. Can wolf boiling ever be justified? Yes, the wolf was attempting murder, but boiling him? That might be a crime, too. Arrest the pig!

As for the huffing and puffing, bloggers wonder: Did the wolf really have the lung power to knock down an entire home? A telltale photo shows the wolf using an inhaler. Did he have asthma? Asthmatic wolves can't blow down homes. Why then, did the first two houses fall? Could the pigs have faked the whole thing?

Is this a case of pig-driven insurance fraud?

I kid you not, this is a totally nutty sendup of media madness. It's nicely done, and very dark, cynical. Take a look.

Now comes the amazing part. The Guardian does not consider this video a sendup. On the contrary, says editor Alan Rusbridger. "The Three Little Pigs" video is a declaration of what The Guardian wants to be, wants to become, which is an open-architected, let's hear from our viewers, our bloggers, you "out there" — the amateur photographers, gossips, sleuths, you with your opinions, your enthusiasms, your suspicions. Media companies have been saying this for years, but Rusbridger says The Guardian is going all-in.

"By being more open and more participative, more networked, it is likely to be a better approximate for the truth," he says. That includes "even determining its news agenda."

Does The Big Bad Wolf Have Asthma? 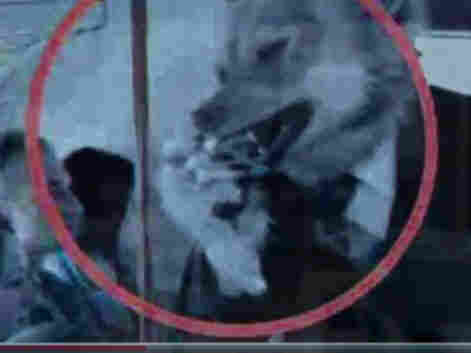 The video tries to make his case. If you watch, you'll see it's not a staff photographer, but an amateur on a bus who catches Mr. Wolf using an inhaler and sends the picture to The Guardian. That photo is key. It suggests the simple, mass media story "Bad Wolf, Clever Pig" is a cover-up, that the wolf may be innocent.

Also, a story about home invasion can, I suppose, include fierce discussions of live boilings and the stress of paying high mortgage interest rates.

But still. Here's the editor of a great newspaper — and The Guardian is that — more or less officially saying that great reporters and great editors (and The Guardian has lots of them) aren't enough. Not anymore. Coverage will be guided by what, at least in the video, smells like buzz and fury. (Whoever made this video has an odd way of making the paper's case: The mood is so frenzied, so violent. Did Alan hire a team that decided to subvert him? Should there be a second video to debunk the first?)

My point is this is a very odd way to celebrate a new style of newsgathering. I agree that it's time to try new forms, invite our audience in, share what we see. That's what this blog you're reading now is all about. And it's tricky, because on this page we are "sciencey"; the subjects are often highly technical, and my readers often know more than I do. But the idea is to create a common space to think out loud in, to share, to wonder.

The Guardian video doesn't advertise sharing. Editor Rusbridger says the bloggers, the reporters, the editors, the Twitterers are making a 21st-century noise he calls "open journalism," but the noise they make is combative, more like a snarl. It's a media environment that's raw, loud, and while it may sometimes get closer to the truth, it feels ugly.

Maybe this is The Guardian's way of saying better isn't always nicer. But it has me wondering, ever so slightly, if nicer isn't sometimes better.

Once upon a time (in 1986), The Guardian produced another video commercial that is much easier to take. It's kind of wonderful, actually. It says, in essence, you don't know what you're seeing until you've experienced multiple points of view. More views equal more truth. This one is very short, and starts with what looks like a crime. But keep watching. ...