Accessibility links
Mirror, Mirror On The Wall, Do The Data Tell It All? : Krulwich Wonders... Stephen Wolfram has kept stats on almost every aspect of his life, including the time of every email he's ever sent, how many steps he's taken and how many times he's hit the delete key. But in a portrait painted solely with data, what's missing?

Mirror, Mirror On The Wall, Do The Data Tell It All?

Mirror, Mirror On The Wall, Do The Data Tell It All?

I want you to meet two friends of mine, first Bill, then Stephen. Bill's a pretend friend. We've never met, but I read all his books.

He's the (thump, thump goes my heart) writer Bill Bryson, and in my imagination we are chatting, and since we've just met, I say, "Tell me a little something about yourself."

Bryson scratches his head and goes, "Well..." and then, word-for-word, quotes from a book he wrote, that says when he was a little guy, around the age of 10, he knew more than he's known anytime since.

I knew everything there was to know about our house, for a start. I knew what was written on the undersides of tables and what the view was like from the tops of bookcases and wardrobes. I knew what was to be found at the back of every closet, which beds had the most dust balls beneath them, which ceilings the most interesting stains, where exactly the patterns in wallpaper repeated. I knew how to cross every room in the house without touching the floor, where my father kept his spare change and how much you could safely take without his noticing (one-seventh of the quarters, one-fifth of the nickels and dimes, as many of the pennies as you could carry).

I'm impressed. When I was a kid, I knew stuff like that — different, but really the same. So that's Bill. Now comes my second guy, who I know only slightly. He's a celebrated physicist, businessman and mathematics geek, Stephen Wolfram. I ask him the same thing. Tell me something about yourself. And he says, OK, since 1981, I've written one third of a million emails. Really? I say. And to prove it, he shows me this: all the emails he's sent each day.

Stephen is not like Bill. He is what they call a "quant," a number lover. For years he's been keeping track of his days, his nights, his walks, his talks, his phone calls, his emails, his keystrokes (yes, the number of times his fingers have hit computer keys and — I kid you not — the number of times he's backspaced; he has that too! ) "I have," he says, "what is probably one of the world's largest collections of personal data."

For example, look at this. These are all his emails, plotted as dots. They track twenty years of his life, and describe someone who's been emailing constantly – especially after 2002.

His chart is oddly organized. 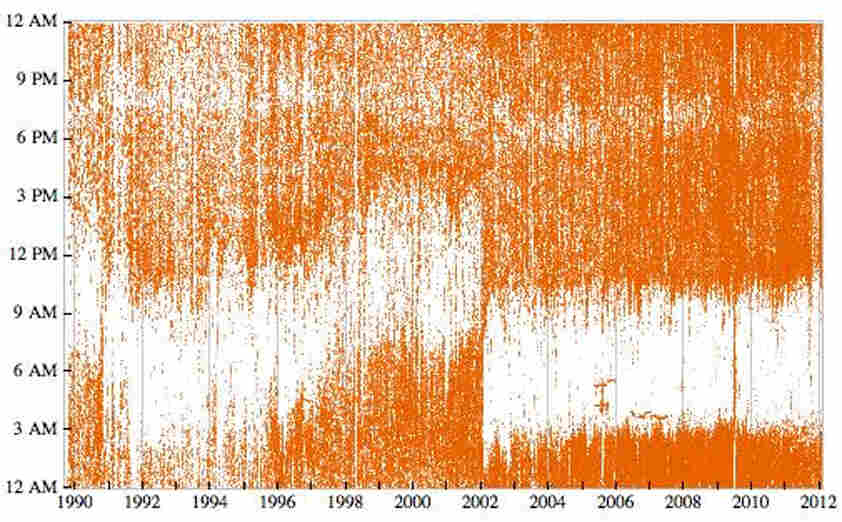 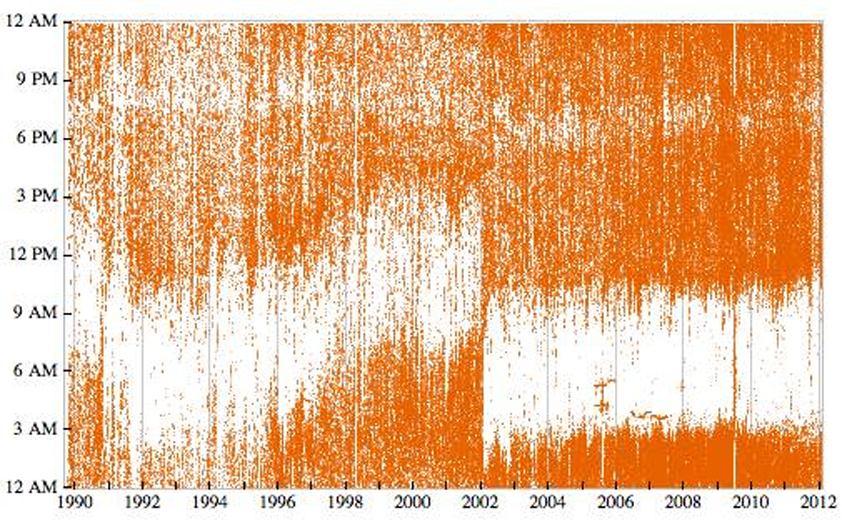 A graph illustrating the amount of emails Stephen Wolfram has sent since 1990.

The bottom line is midnight and as you raise your gaze, you are moving through Stephen's day.

The big band of white is when he's asleep. He says he dozes off around three in the morning and rises just before noon. In the 1990s his bedtime varied a little, but after 2002 (when he finished a major book project) he's been much more consistent.

There's another faint band of white toward the top of the chart. That's dinner time. Wolfram is a family man, and when he sits down with his kids around 7 p.m., the fog of business clears a little. Then he dives back in.

"Yes, I've been busy," he says on his blog. The graphs back him up. When he's not tapping a keyboard, he is yakking. More likely he's yakking and tapping simultaneously. Check out this plot of "the times of calls I've made."

Geez, his ears must be falling off. It appears that, except for dinner, he's hardly ever off the phone.

This next chart has him in conversation 8 or so hours every day, more like 10 hours recently.

A graph illustrating the amount of time Stephen Wolfram spent on the phone each day.

So does he ever walk around? Go for a run? "I've also got data on physical activity," he says on his blog. "For the past couple of years I've been wearing a little digital pedometer that measures every step I take."

When he says "every step," he means every step. This is his Steps Taken by Hour of Day chart.

A graph illustrating the amount of steps Stephen Wolfram took each day.

Stephen likes how he's achieved an even-ness. Again, quoting from the blog:

I take about the same number of steps every day. And many of them are taken in a block early in my day [for him, that's around noon, since he rises late]. There's no mystery to this: years ago I decided I should take some exercise each day, so I set up a computer and phone to use while walking on a treadmill. (Yes, with the correct ergonomic arrangement one can type and use a mouse just fine while walking on a treadmill, at least up to — for me — a speed of about 2.5 mph.)

I'm not sure how (or even if) he ever stops and takes time to stare at the sky, or go for a un-wired walk, but it's pretty clear he likes thinking about himself, and his most fascinating self is a refraction of numbers. Numbers tell him things, teach him things. Which is why he keeps collecting. Did I mention that he also has:

Room-by-room motion sensor data? Really? How much more could there be?

There can always be more, he says. "As I think about it all, I suppose my greatest regret is that I did not start collecting more data earlier."

"At first it all may seem quite nerdy," he goes on. (Oh, really? Does he think so?) "But it won't be long before it's clear how incredibly useful it all is — and everyone will be doing it, and wondering how they could have ever gotten by before."

Wait A Second...Are You Serious?

This is where Stephen and I part company. Of course numbers and patterns tell us truths, real truths about the world and about ourselves. No doubt. But what you see, over and over, is activity. Here's what I did, did next, did after that. It's outside stuff, not inside stuff.

Compare this, from Bill Bryson, again describing what it was like to be 10:

I knew how to relax in an armchair in more than one hundred positions and on the floor in approximately seventy-five more. I knew what the world looked like when viewed through a Jell-O lens. I knew how things tasted — damp washcloths, pencil ferrules, coins and buttons, almost anything made of plastic that was smaller than, say, a clock radio, mucus of every variety of course — in a way that I have more or less forgotten now.

This is not just the shape of a life; it has feel, interiority. It's rich with the touch, taste and the sense of what it's like to be alive. The math gives you outline. The prose gives life itself.

There is room, of course, for both ways of seeing, but what worries me about Stephen and the other folks who are celebrating this science they call "Personal Analytics", is that they think the stories they tell are the keys to wisdom.

"It's amazing how much it's possible to figure out by analyzing the various kinds of data I've kept," Stephen Wolfram says. To which I say, "I'm looking at your data, and you know what's amazing to me? How much of you is missing."

Bill Bryson's musings about what it's like to be 10 come from his 2006 autobiographical account of growing up in Des Moines, The Life and Times of the Thunderbolt Kid. Stephen Wolfram's graphs and plots come from his March 8, blog post "The Personal Analytics of My Life." His automated data analysis tools — which you can use to generate your own analytics, come from his newly released software product, Wolfram/Alpha Pro. Stephen's big book (and believe me, it's big) is A New Kind of Science.