Accessibility links
To Map Or Not To Map The Brain? That's Tonight's Question : Krulwich Wonders... All over the world, neuroscientists are trying to answer a question: How do gooey, stringy brain cells produce a mind? If you look deeply into a brain, into the 80 billion brain cells coiled inside your head, could you see a thought in there? A dream? Desire?

To Map Or Not To Map The Brain? That's Tonight's Question

To Map Or Not To Map The Brain? That's Tonight's Question

"Mind is such an odd predicament for matter to get into," says the poet Diane Ackerman. "If a mind is just a few pounds of blood, dream and electric, how does it manage to contemplate itself? Worry about its soul? Do time and motion studies? Admire the shy hooves of a goat? Know that it will die?

...How can a neuron feel compassion?"

All over the world, neuroscientists are beginning to address these questions, which are really the same question: How do gooey, stringy brain cells produce a mind? If you look deeply into a brain, into the 80 billion brain cells coiled inside your head, could you see a thought in there? A dream? Desire? 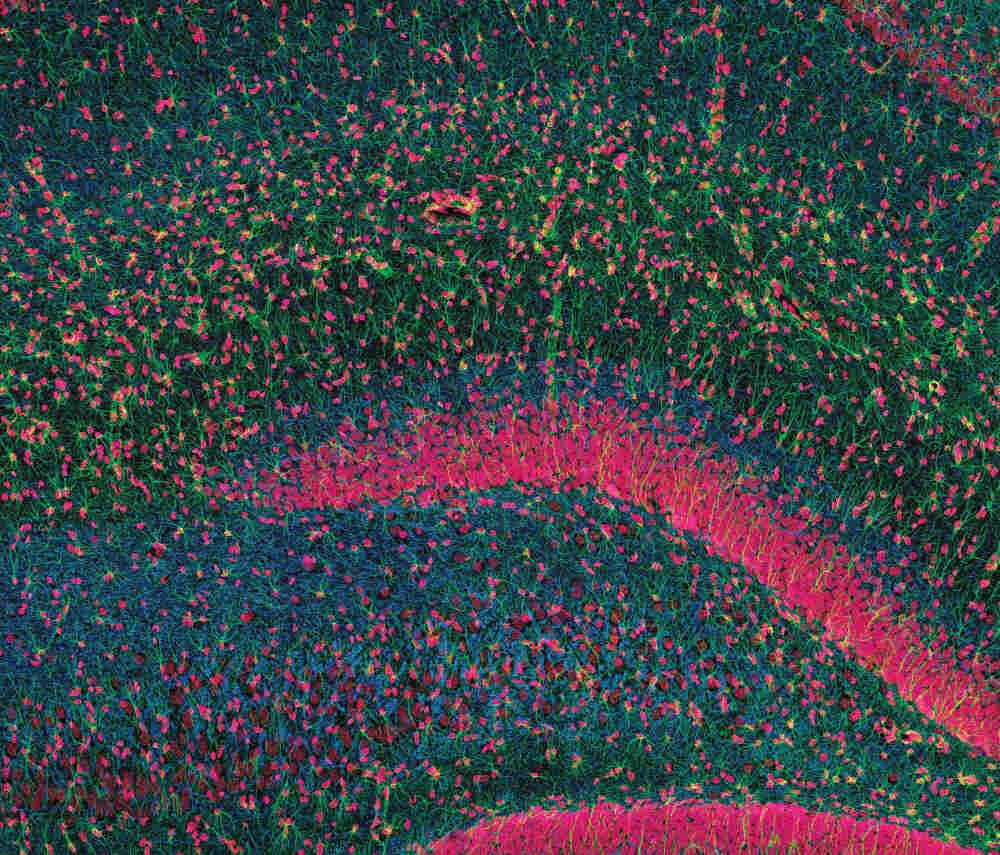 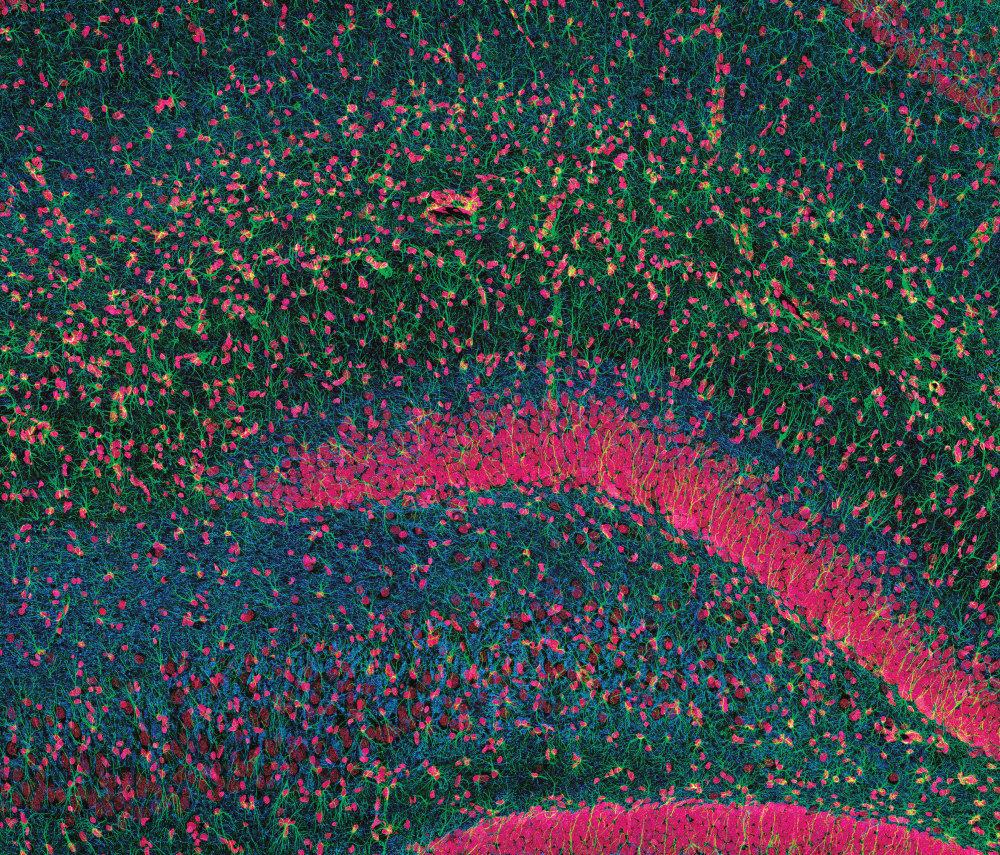 Do Experiences Re-Wire Our Brains?

Well, we begin with a hypothesis: that when I have a significant experience, that experience literally changes me. Not just affects me, changes me, creates new structures in my head.

So suppose I'm at a high school dance and I see a beautiful girl across the room, and I ask a friend, "Who is that?" And the friend tells me, "That's Maria."

All over the world, neuroscientists are beginning to address the question: How do gooey, stringy brain cells produce a mind?

Remember what happens to Tony in West Side Story? When he first hears her name, his brain starts to pulse "Maria, Maria, Maria, Maria..." It's the most beautiful sound he's ever heard.

A neuroscientist would guess that at this very moment, Tony's brain cells are changing shape, literally growing branches, firing messages that represent bits and pieces of Maria. As they fire, their tentacles are multiplying, getting fatter, their signals getting stronger, and a pattern is forming across tens of thousands of brain cells, all pulsing a message that to Tony feels like all the beautiful sounds of the earth in a single word...say it now, say it loudly...

Or, if you're not into Broadway musicals, let's say Tony's brain has created a neuronal pattern. Every time Tony thinks of Maria (which is constantly) cells in his head are linking themselves more tightly together: Maria has re-wired his brain.

A physiologist might sing it this way: "Cells that fire together, wire together." It ain't Sondheim, but maybe that's what a memory is: it's a new pattern in your head.

That's the theory. But can scientists test this idea? See if it's true?

Well, that's the difficulty. It's not easy to decipher a brain. Over the last 50 years, we've had some extraordinary breakthroughs. A scientist will get interested in a question, like, how does an animal learn? He'll do a clever experiment (I'm thinking of one guy who figured out how a sea slug remembers something) and other scientists will read what he's done, and try it on their lab animals, and gradually our knowledge grows. It's a sort of random way to do business, but we've made a lot of progress letting young scientists explore as they please. 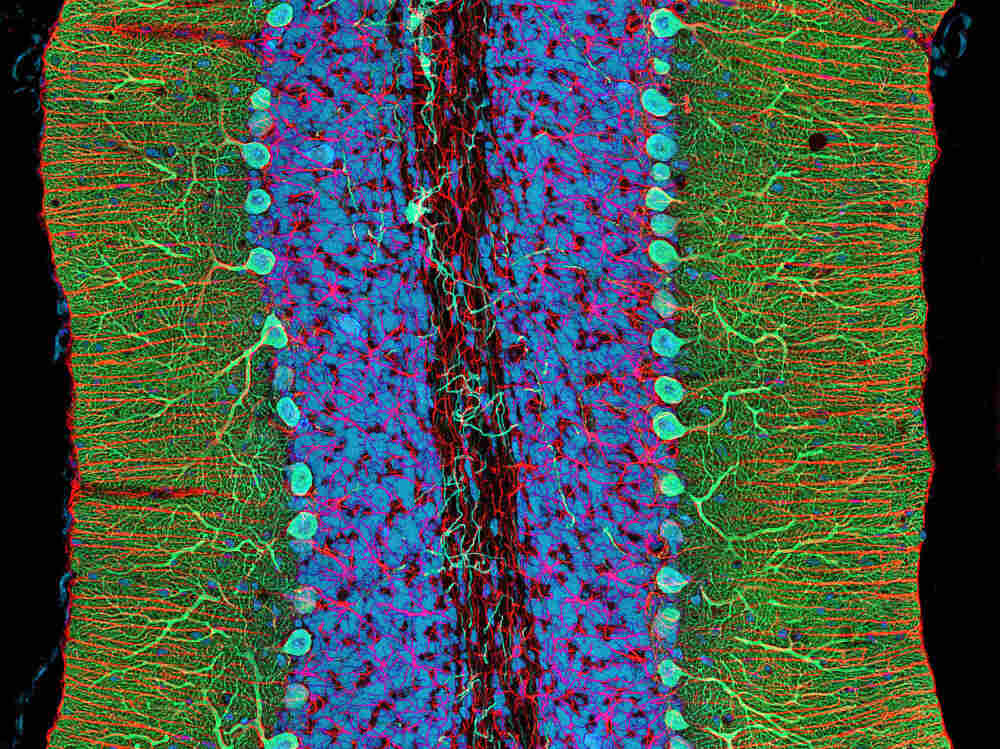 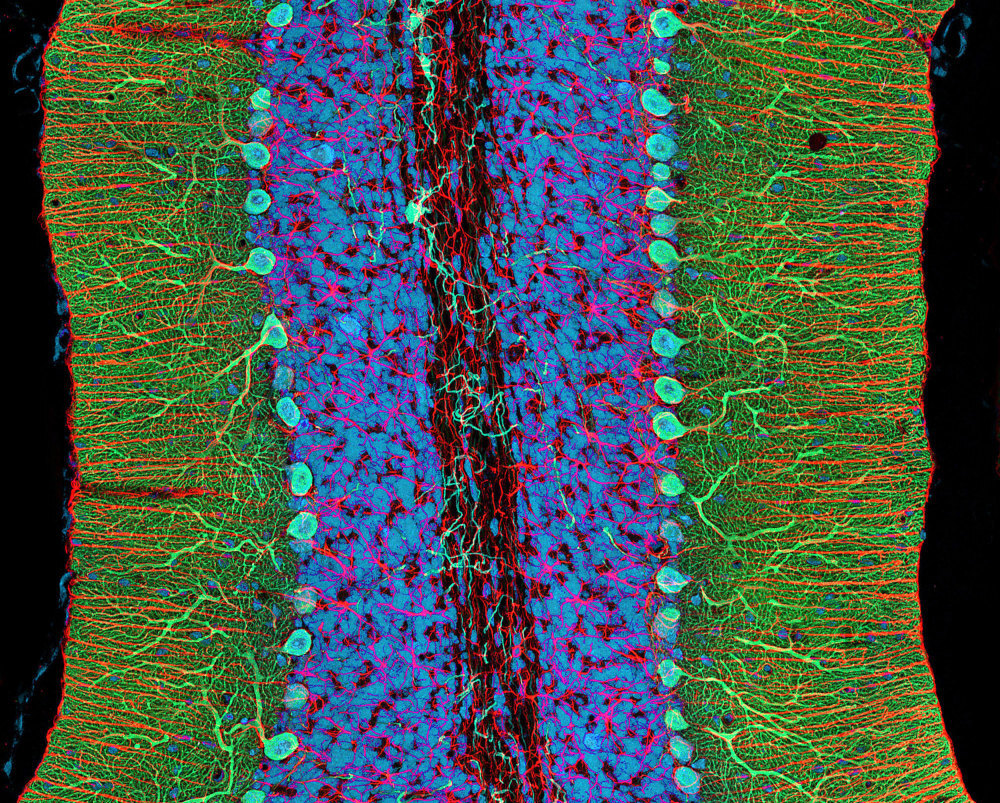 We could do this more systematically. We could build a detailed brain map that shows every neuron in the human brain. That way, scientists could see much more clearly how and where patterns form. We lack such a map, or anything close to it, right now.

Why Not Map A Brain?

What's wrong with mapping the brain? In principle, nothing. It makes total sense.

But there are practical difficulties: First, the task is enormous. There are 80 billion cells, connected in almost a hundred trillion ways. We could (using faster and faster computers) map all of them, but it would still take decades, (maybe centuries) to finish the job. Mapping even little hunks of brain takes years.

Second, there's the expense. Not just the millions of dollars necessary for computers, but the need for talented brain scientists to inspect and interpret the map for accuracy. Brain cells vary tremendously. Some stretch their tendrils across vast distances; others cuddle tightly with their neighbors. Some cell pathways are used often, some are used rarely. We don't really know which is which. There may be invisible software that regulates activity among cells; finding, classifying and understanding what we see (and don't see) will not be easy.

I Don't Want To Make A Tool, Thank You

There's another danger. Right now, neuroscience is attracting some of the most adventurous minds on campus. These newly minted graduates want to explore mysteries, questions that fascinate them. If you are 27, getting a Ph.D. and looking to make your mark, what happens if more and more faculty jobs, more grants, more promotions go to those willing to devote their time to mapmaking, to building a tool that won't be really useful for another 10, 20 or 50 years? Do you want to spend your life as a toolmaker? No, you want to explore. The danger is that great push to map the brain will frustrate the very people we want to attract to the field — the mavericks, the adventurers — and if they don't hang around, we will miss the discoveries we could have the good old fashioned way, by letting talented people follow their hunches.

Plus, there's the danger of overpromising. When governments put big money into big science experiments, they want results. The people pushing for a brain map have suggested a map will help us identify certain diseases, assess therapies, teach us secrets of human nature, read minds, do all kinds of supercool things. But what if it doesn't work out that way? We know so little about how minds work, that our presumptions going in may turn out to be wrong.

We may discover that when Tony sees Maria across the dance floor, Tony's brain cells do not stitch themselves into a Maria-centric pattern, that humans do not remember the way sea slugs remember, that we're back to square one, knowing nothing. That happens. The problem is, politicians don't enjoy discovering mysteries. They want results. And money flowing to brain research may suddenly get scarce. 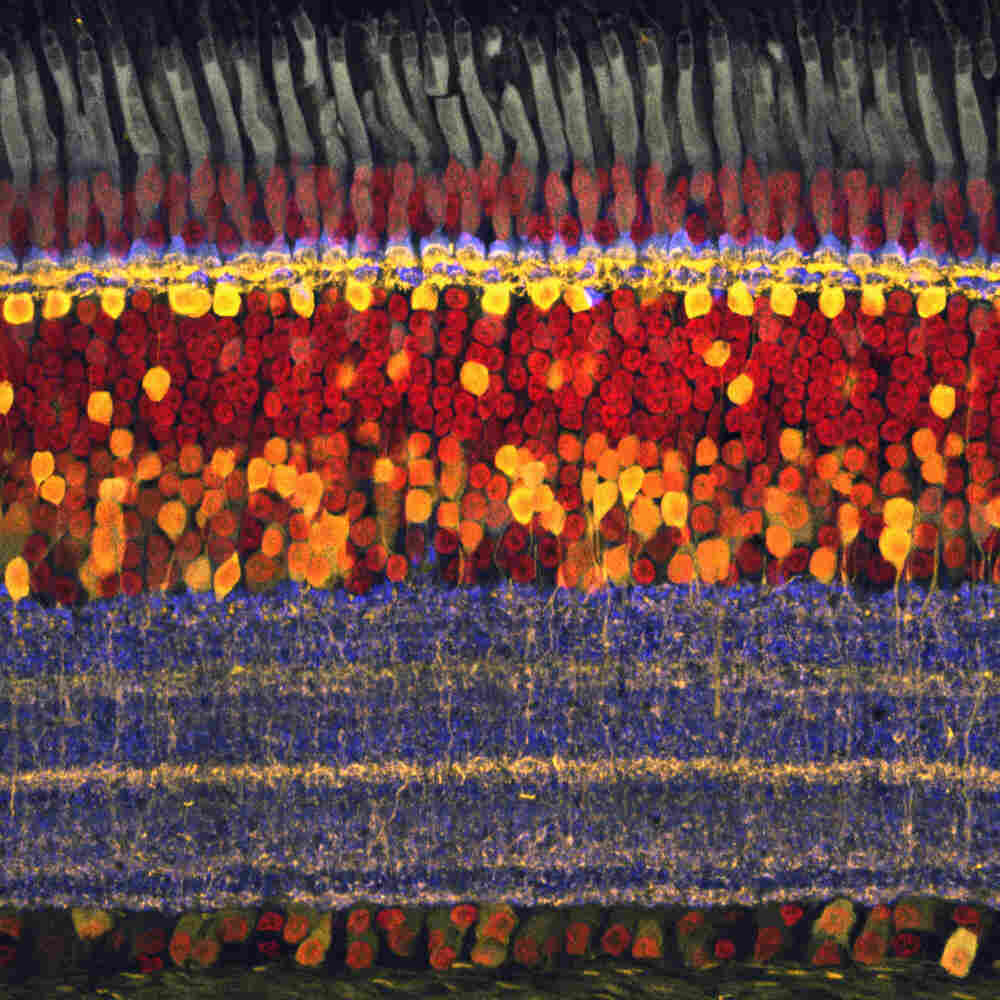 Enlarge this image
Andy Fisher/Portraits of the Mind 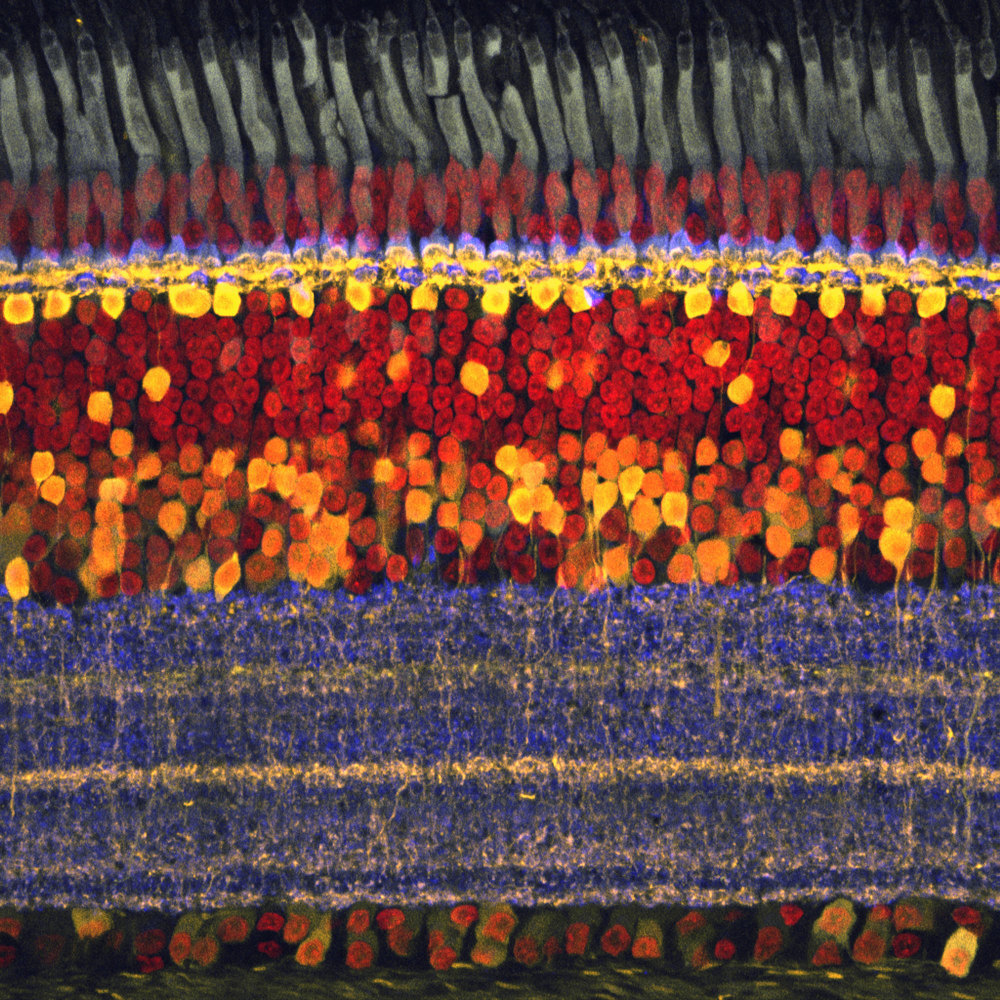 Andy Fisher/Portraits of the Mind

In principle everybody wants a "connectome," a map of the human brain. The question is: What will it cost? And is the cost worth the likely benefit? Those who oppose a brain map are really saying, build a map, sure, but let's not blow trumpets, hire an army, push on all fronts. Let's not put too many eggs in the brain map basket. We also need to attract talent to our field, keep money coming for other ideas, give our adventurers room to explore. One day we're going to figure out what going on in Tony's head when he goes gaga for Maria, but if that takes 50, maybe 100 years, that's OK. The knowledge will come.

What's the rush? This is the mystery of mysteries.

Tonight, April 2, Carl Zimmer (of Radiolab, The New York Times and Discover, whose recent books stretch half a shelf at your local bookstore) and I will be at Columbia University to moderate a debate about brain mapping. It's called "Does the Brain's Wiring Make Us Who We Are?" Sebastian Seung (see my last post) of MIT will duke it out with Anthony Movshon of NYU. If you are in the New York area, the main room is full but you can sign up for a free seat in nearby Pupin Hall 301. Here's the Eventbrite page where you can grab yours.

If you can't make it there in person, you can join us in cyberspace by catching the livestream on the Radiolab web site.

Thanks to Carl Schoonover for the brain pictures. You can see a host of them in his book, Portraits of the Mind.