Accessibility links
Wind At Sea Is Strangely Van Goghish, Says NASA : Krulwich Wonders... Sea surface currents look uncannily like a van Gogh sky. In this visualization, watch how wind dances on the ocean's surface, twisting and turning around the continents. 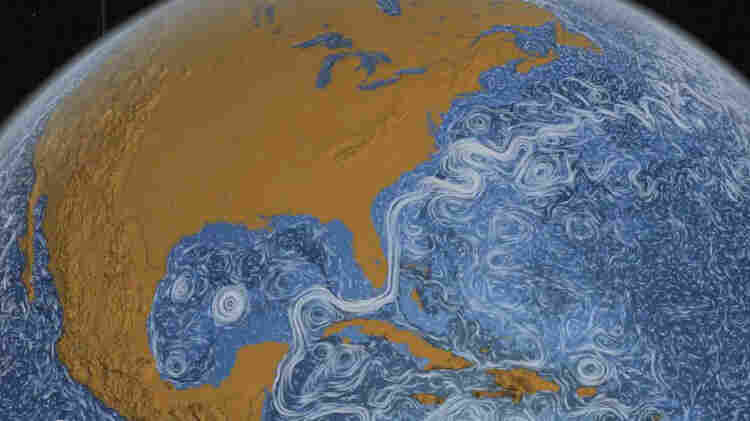 Most of the surface currents in the ocean are shaped by wind. In this visualization from the folks at NASA, the ocean is rich with lazy spirals that move in great circular sweeps (called "gyres") clockwise in the northern hemisphere, counterclockwise in the south. Think of the ocean surface here as a reflection of the winds above, a kind of watery mirror (though the spinning of the Earth, tugs of sun and moon and obstruction of continents play a part.) Click on this video, and you'll see the dance of wind-on-water everywhere.

I like watching the Gulf Stream roar past the tip of Florida in the beginning, all white and purposeful, heading up the North American coast. There's something playful about water and wind bumping into large land masses likeAfrica, breaking into whirligig spirals, spinning along the shore. Then there's the equator, which in this version seems almost wall-like. As the winds approach it, they flatten into jet like streams racing along a corridor.

What this map doesn't show is the newest discovery created by ocean gyres. It's called the Great Pacific Garbage Patch, a vast, Texas-sized clump of human garbage floating in the Pacific. Created by a convergence of ocean currents and wind somewhere betweenHawaii andCalifornia, it's not visible from satellites. Apparently, a thick blanket of pop bottles and chemical sludge sinks a little below the surface so it can't be seen from above and, anyway, it turns out garbage doesn't clump in a spiral; it looks more like a Nickelodeon splat, so if we could see the Garbage Patch, it would ruin the mood created here.

This is an image of wild wind, water and spiral beauty. And what does it say about us that our first human mark is a splat that feels like we've dropped some mud onto a van Gogh painting?

Thanks to reader Donald Thomas for mentioning this video yesterday; and also to Jason Kottke, the blogger who gets everything earlier than everybody. Also, Google Earth has an interactive ocean current explorer illustrated here.