Accessibility links
The Strange Persistence Of Shoes At Sea : Krulwich Wonders... When explorer Robert Ballard discovered the Titanic on the sea floor in 1985, he also found a pair of leather shoes sitting on the deck near the stern of the ship. 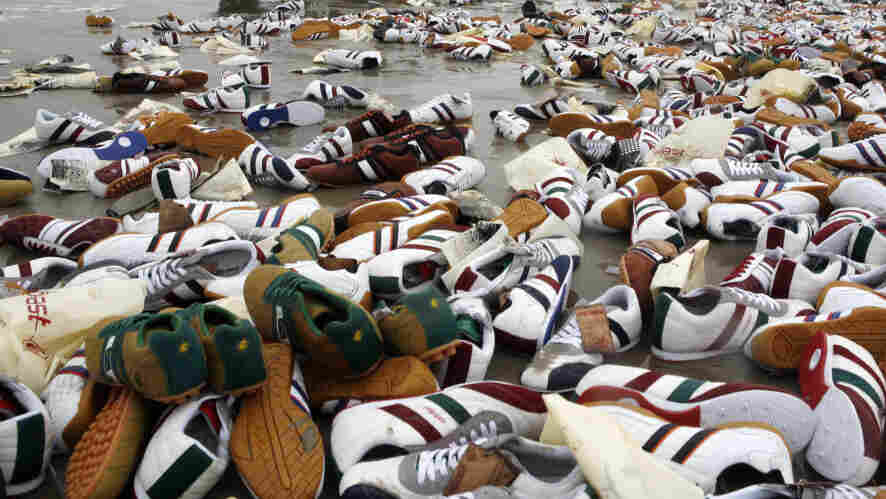 Tennis shoes lay on the beach on Terschelling island, Netherlands, Feb. 10, 2006. They were from a shipping container that fell off a ship during a storm. Marleen Swart/AP hide caption

A ship sinks. A hundred years pass. What remains? Look down, down to your feet while I tell you this tale.

Let's make it two tales. A few years ago, Bill Broad, reporter for The New York Times, was in a submersible, somewhere in the eastern Pacific Ocean trying to reach the very bottom of the sea. "We fell for an hour," he writes. "It was a place no human had laid eyes on before," far from sunlight, inky black with the occasional sparkling critter passing by. They kept moving down, deeper. The goal was to touch down near a volcanic vent, an opening in the seabed that leaks hot lava which then instantly cools into towers of frozen rock. They call these things "chimneys" since they keep smoking. They are tall, fragile and not nice to bump into.

"After an hour of exploring the dim expanse, Broad writes, "our pilot, Bob Grieve, reported a jarring find." He'd seen something. What?

"A tennis shoe," he said, his voice tense, his eyes glued to the front window.
"No."
"Yes."
"No."
"A tennis shoe, a Reebok Tennis shoe. God, I can't believe it!"
The shoe lay atop gray sediment near mounds of dark lava, sitting upright in perfect shape. Bob raised one of the sub's twin robot arms to retrieve the lost object.

Bill Broad does not say what they did with that shoe or why it was there, a mile and half below the surface, so poised, so undamaged. He may not know. For some reason, the shoe, against all odds, persisted.

Too Bad It Was A Reebok

Had it been Nike, instead of Reebok, there'd be an explanation. In 1990, 60,000 Nikes slipped off a cargo ship in the northeastern Pacific and sailed, in shoe flocks, on the currents. A few hundred washed ashore in British Columbia six months after the accident, then hundreds more landed at beaches down the Pacific coast. They were coated with barnacles, algae and tar, but with a quick washing, they were not only wearable, but beachcombers held swap parties to find matched pairs.

Shoes That Stayed On The Titanic

Now the second story. It comes from Robert Ballard, the explorer who discovered the wrecked Titanic deep in the Atlantic in 1985. He was talking to Professor J. Joseph Edgette, about the more than 1500 people who died that night. According to The New York Times, 300 bodies were pulled from the sea, after the Cunard steamship Carpathia picked up survivors. More than 115 were given sea burials, the rest were taken to Halifax, Nova Scotia, and assigned to three cemeteries or returned to their families. The people who didn't get off the ship have been trapped inside, their bodies out of reach.

There used to be bodies in those shoes.

According to the Times, Ballard said, "When those bodies went down, they stayed down." Then, looking at a set of photos taken by an underwater robot, he paused at an image that showed a small patch of deck near the stern of the ship. There, sitting in a clump of debris, sat a pair of leather shoes, more like boots. "You see these shoes down there?" he said. "There used to be bodies in those shoes. The body parts deteriorated, and the skeletal remains decalcified. The only thing left are the shoes, and the leather is perfectly preserved." The tannin in the shoe leather had apparently resisted the bacteria.

Ballard says there are a number of these shoe pairs, and because of their position, their location, because he's talked to people who know these things, each pair are evidence of a former life. The person who once wore them is gone, but the shoes, and only their shoes, strangely, remain.

In the end, everything succumbs to the sea, the sun, the winds. But is it possible that shoes, for whatever reason, defy the elements for an extra beat or two? Probably not. But sometimes it feels that way.

Bill Broad's classic book about the ocean depths is The Universe Below, Discovering The Secrets of the Deep Sea. Thanks to Dave Mosher for the Nike tale.