Accessibility links
Fetal Attraction : Krulwich Wonders... Cells from fetal boys and girls have been found in mothers four to five decades following their last pregnancy. And researchers think they must be doing something. But what?

There you are, inside the placenta, all cozy and wrapped; mommy all around you — this is nice.

Except for the occasional leak. 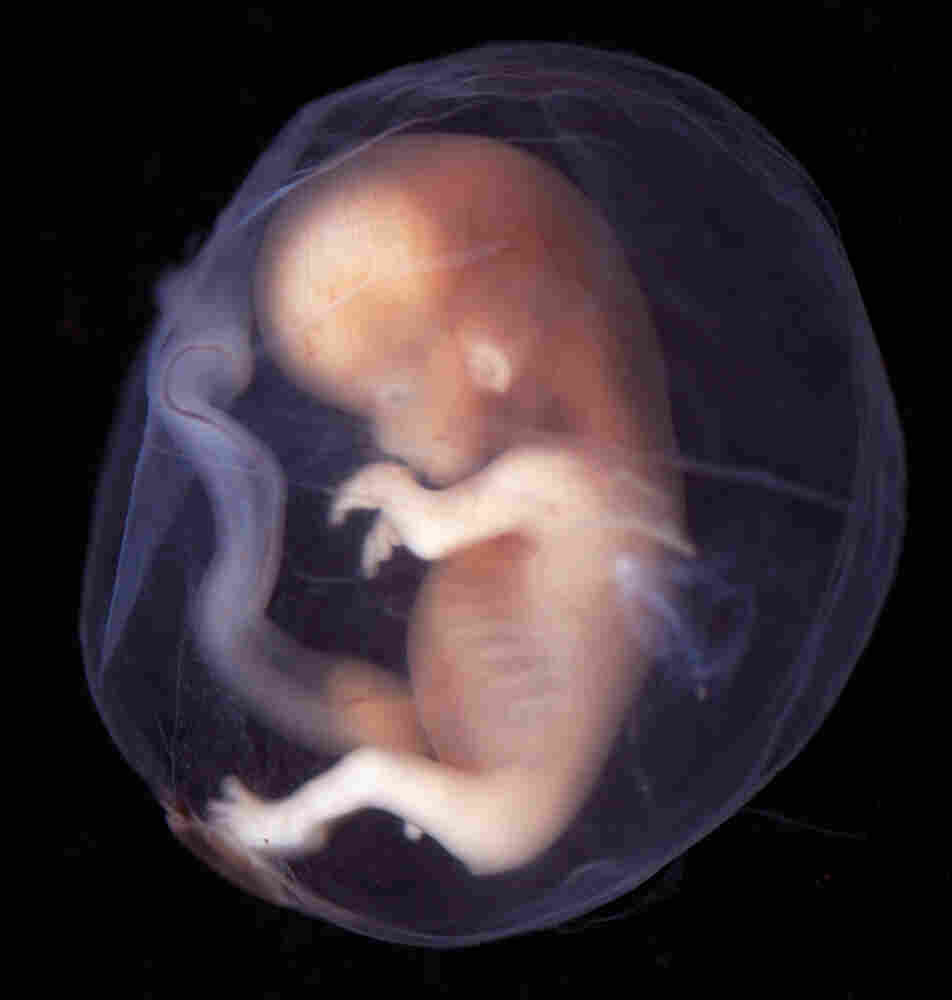 Six years ago I reported on Morning Edition that whenever a woman gets pregnant, some of the baby's cells slip through the placental wall into the mother's blood and settle down for a while — outside the placenta.

Then, when the baby is born (or fails to be born), most of those cells disappear. After all, the baby's DNA is different; it's a combination of mom and dad. So in the genetic sense it's a foreigner and doesn't belong in mom any more. "One would expect [fetal cells] to be attacked fairly rapidly," said Dr. Kirby Johnson of Tufts University.

But here's the surprise: some of those fetal cells stay.

Dr. Johnson says cells from fetal boys and girls have been found in mothers "four to five decades following the last pregnancy." That fetus may have grown into a middle aged pharmacist, and still his cells are inside his mother. Cells wouldn't persist in foreign body for NO reason. They must be doing something, but what?

That's what I asked Dr. Johnson six years ago. Back then, he didn't know, but he was following two possibilities.

The first, which he called "not the nicest idea," was that the cells stick around and do the mother harm. Women have lupus, rheumatoid arthritis, scleroderma more often then men, and maybe that's because fetal cells go to the affected sites and, from time to time, join the autoimmune attack on their host. Fetal cells were seen in such places. Dr. Johnson called this "The Bad Hypothesis."

The second possibility is the opposite: that fetal cells stay in the mother to protect, defend and repair her for the rest of her life. Researchers had seen certain fetal cells rush to places where the mother needed repairing and thought those cells might be turning themselves into healthy skin or liver cells just to help Mom. They call this "The Good Hypothesis."

And of course there was the more boring possibility: that the cells do nothing. Just float around. Or that they switch sides, help sometimes, hurt sometimes. Scientists all over the world began to investigate.

Back in 2006, Dr. Johnson was leaning to the "Good" hypothesis. He was finding hints of repair, no evidence of hurt. He told me about a woman at his hospital who arrived with symptoms of hepatitis. She'd had five conceptions: one child, two miscarriages, and two abortions — and presumably had accumulated lots of fetal cells.

When they examined compromised tissue from her liver, they discovered lots of fetal cells. "We found hundreds and hundreds," he said. Normally they'd expect to see five or ten, but in this case there were "literally sheets of cells — whole areas" gathered at the liver apparently turning themselves into healthy cells.

"This woman did not desire to have any further treatment done," says Dr. Johnson. "In fact, she wanted to get back to her normal life and be left alone." So she left the hospital with hepatitis, but months later when they saw her again, she was completely healthy. "No signs of further liver damage," Johnson told me.

Does that suggest that she was saved by her fetal cells? Saved by her kids? I asked. 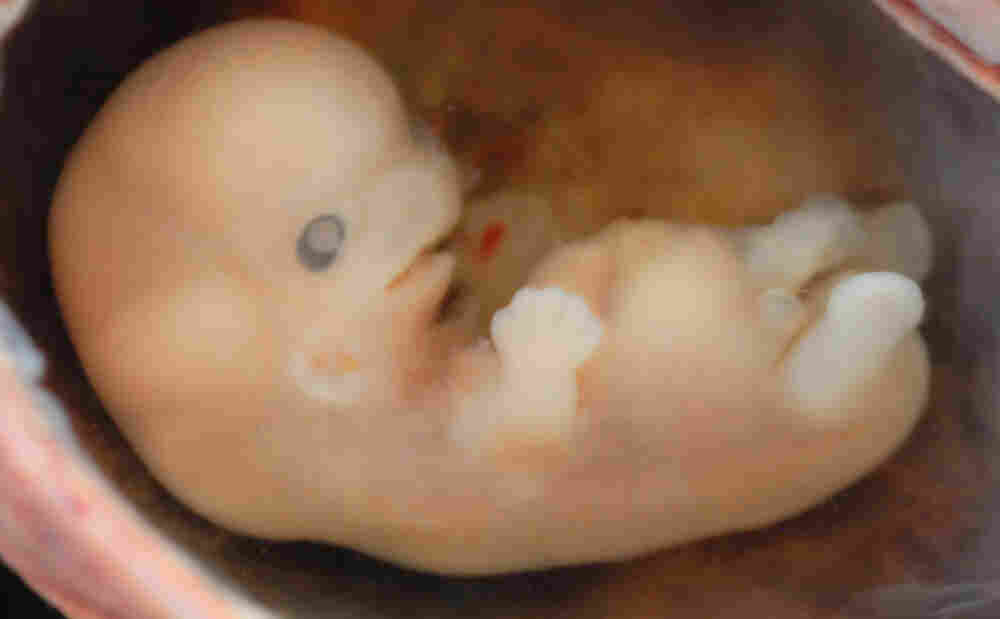 "We want to think that," he answered. But he said it was too early to tell. The data was too sketchy. Ask me about this five or six years from now, he said, though of course he was quietly rooting for the "Good" hypothesis.

During our interview, Dr. Johnson told me his mother had died of an autoimmune disease and he wanted to think that his cells and his brother's cells were inside her, fighting to keep her safe. Being a scientist, he was willing to go wherever the data led, but being a son, he couldn't help but hope.

"Maybe," he said, "if it wasn't for my brother and I, she may have passed a few years earlier. Maybe we bought her a couple of extra years of time so she could have a few more birthdays and a few more Mothers' Days. And that, if...there is some way where I can have the remotest thought that I contributed to the extension of my mother's life, even if it was a few days, that would make all of the years that I've spend doing this research worthwhile."

Well, now that six years have passed, what with Mothers' Day coming on, I thought this is a good time to call him up and ask what he's discovered. You can hear both our conversations, the 2006 one and the one we just did, on Radiolab's newest podcast, "Fetal Consequences." (If you are reading this on the Krulwich Wonders website, it's on this page, over in the right column. Just click and listen.)

What We Know Now

What he told me was disappointing. Scientists continue to see cells that look like they are helping their mothers, but now they've also seen the opposite, cells hurting moms. Fetal cells seem to help out with bad livers, but show up at arthritis and rheumatism sites and look like they might be on the attack. There are hints that cells can go both ways, helpful, then hurtful.

My Brothers'/Sisters' Cells May Be In Me

So when Kirby Johnson and his brother get together to talk, they don't really know any more if their cells helped their mother, hurt, did both, neither, or if they did it differently. "It's possible one of us had a more positive impact than the other. There's obviously no way of knowing that," Dr. Johnson says.

Plus the whole story has gotten messier. We now know that fetal cells can travel from children to mothers and from mothers to children. (You have some of your mothers' cells floating around in you.) Every baby we've ever conceived, whether they were born or no, leaves its mark. Plus fetal cells can pass back through the placenta wall and enter subsequent brothers and sisters. Kirby's brother may have some Kirby Cells in him. Says science writer Jena Pincott:

The fetal cells from each pregnancy, flowing in a mother's bloodstream, can be passed on to her successive kids. If we have an older sibling, that older sibling's cells may be in us. The baby in a large family may harbor the genes of many brothers and sisters. My mother's cells are in my body, and so are my daughter's cells, and half my daughter's DNA comes from her dad. Some of those cells may be in my brain.

It's all getting so blurry. I asked Dr. Johnson, what keeps you doing this research? You may never know if you helped your mother. Instead of being a hero, you may end up discovering that you didn't matter. Why spend years investigating how unimportant you are?

His mother, he thinks, would understand.

Jena Pincott's quote comes from a Boing Boing column, which in turn comes from her book, Do Chocolate Lovers Have Sweeter Babies? The Surprising Science of Pregnancy.