Accessibility links
120 Giants Found Living With 86-Year-Old Man : Krulwich Wonders... What inspired 86-year-old Brendon Grimshaw to buy an island in the Indian Ocean, replant it with 16,000 trees, grasses and lure a bunch of giant tortoises to live with him? 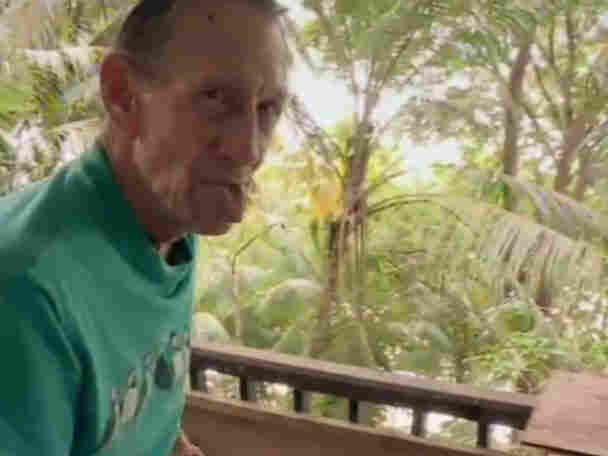 I don't know what kind of nerve, ferocity and stubbornness got 86-year-old Brendon Grimshaw to buy an island in the Indian Ocean, replant it with 16,000 trees, grasses and then lure a bunch of giant tortoises — big galumphing ones and itty-bitty ones — to live with him (one gets born in his bedroom). But he did it, and when he takes reporter Simon Reeve on a tour, he seems so shy and gentle. But I bet he's not. My guess is Brendon is next to impossible to live with, unless you're too big, too slow and too reptilian to care. Take a look.

Simon Reeve, the reporter, has spent the past few years wandering the world for the BBC. A decade ago, he was an investigative reporter covering arms dealing and nuclear smuggling. His book about how al-Qaida was planning attacks on the West, The New Jackals; Ramzi Yousef, Osama bin Laden and the Future of Terrorism, became a New York Times best-seller. But these days, he practices the more delicate art of wandering the world in search of situations he describes as "frightening, uplifting, exhausting, upsetting, challenging and surprising."