Accessibility links
Why Is That Undulating Blob Of Flesh Inspecting My Oil Rig? : Krulwich Wonders... A mile below the sea surface near an oil drill, a robotic camera caught a glimpse of a green-gray blob. The camera operator spun the rig around to catch sight of the glimmering, undulating animal. What was it?

Why Is That Undulating Blob Of Flesh Inspecting My Oil Rig?

Why Is That Undulating Blob Of Flesh Inspecting My Oil Rig?

Every so often, the Internet astonishes. Things I wouldn't, couldn't, shouldn't expect, sometimes happen. Take this, for example: 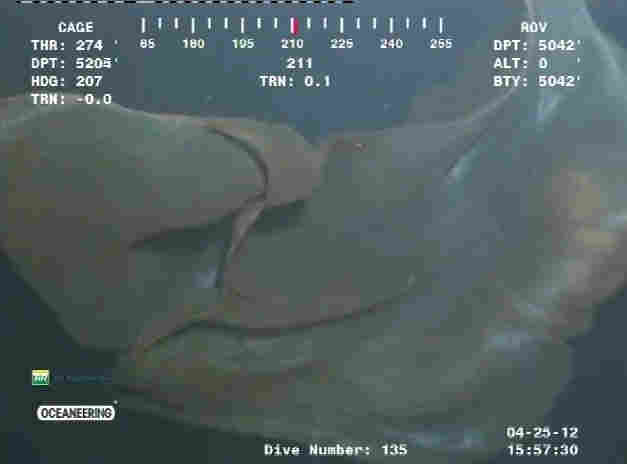 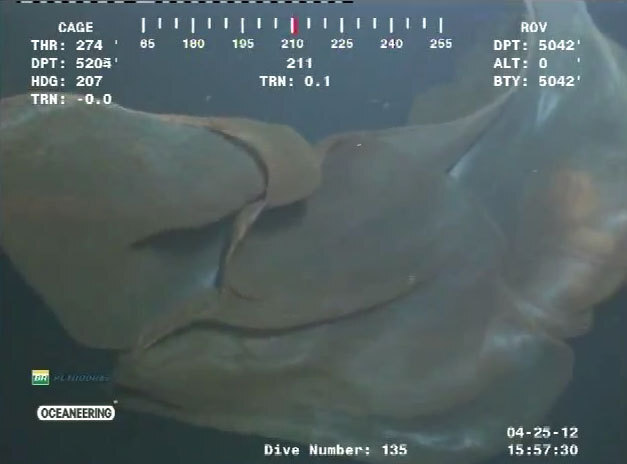 On April 25, somewhere in the ocean off Great Britain, a remotely operated video camera near a deep sea oil rig caught a glimpse — at first it was just a glimpse — of an astonishing looking sea creature. It was a green-gray blob of gelatinous muscle, covered with a finely mesh-like textured skin, no eyes, no tentacles, no front, no back. It moved constantly, floating up to the camera, then it backed off and disappeared. The camera operator tried to find it, and then, suddenly, out of the darkness, back it came.

What was this thing?

It had no mouth. It seemed to be undulating, or at least moving with intention. It looked like it was coming back to the drill to ... to do what? Or maybe it was dead. Just a floating bit of tissue, a whale placenta, perhaps?

You'd figure a video like this, once it went on the Internet (which it did last month) would produce the usual wild explanations from people who know little but post madly, rumors masquerading as knowledge, a great riot of misinformation and silliness. But not this time.

Yes, for a few hours, The Thing From The Deep got passed around by hundreds of thousands of people who ooh-ed and ahh-ed, and got giddy with it. (Loch Ness monster? Return of The Blob? ) But then, up popped Craig McClain, chief editor of the Deep Sea News.

"Dr. M," as he's known, is a scientist at the National Evolutionary Synthesis Center at Duke University. He knows his deep sea critters, and very promptly he posted his guess: First of all, he said, this isn't a whale placenta. Placentas are too tasty, too nutritious to make it 5,000 feet down without getting eaten.

Instead, he went hunting in the library and found two papers that described an animal that could be The Thing. The critter on the oil drill video has, he noticed, a sex organ, "gonads" ... 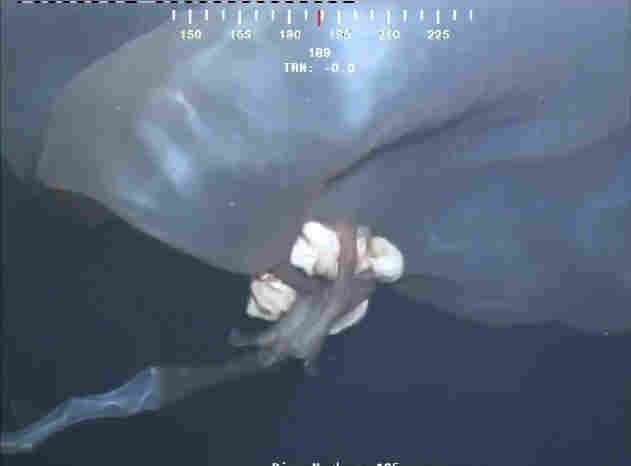 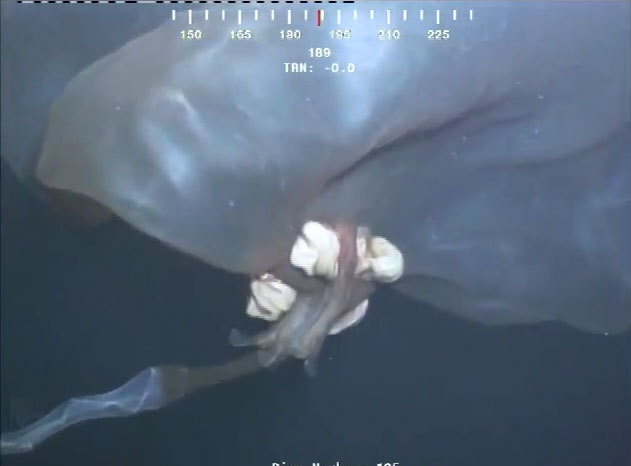 Those gonads vaguely resembled a similar organ in a giant jellyfish called Deepstaria enigmatica. (Strange what marine biologists think about ...) As for its shape, alone in quiet water, these big jellyfish look like you'd expect; bell-shaped tops, with dangling parts, but the motion of the video camera, pushing left, right, up, down, may have created a turbulence that caused the jelly to undulate and get all flappy.

Did Dr. M get it right? Is this a Deepstaria enigmatica? Not quite. Right away, marine biologists from all over rushed in with their own guesses, and the consensus was; yes, it's a jellyfish, but not an enigmatica. What we have here is a very similar jelly called Deepstaria reticulum, an unbelievably weird-looking blob that eats with those little membranes in the skin, fights with bumps on its surface, has an opening (that, when lit, seems to glow). It should be a contender for The Strangest Looking Earthling On Earth. 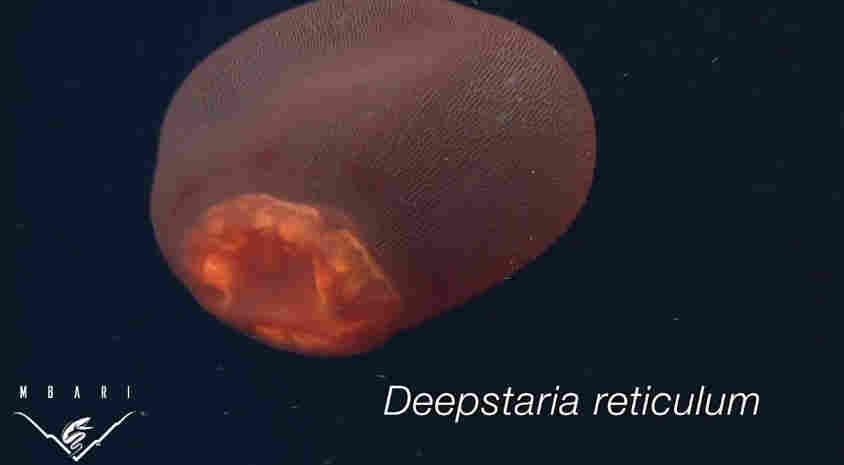 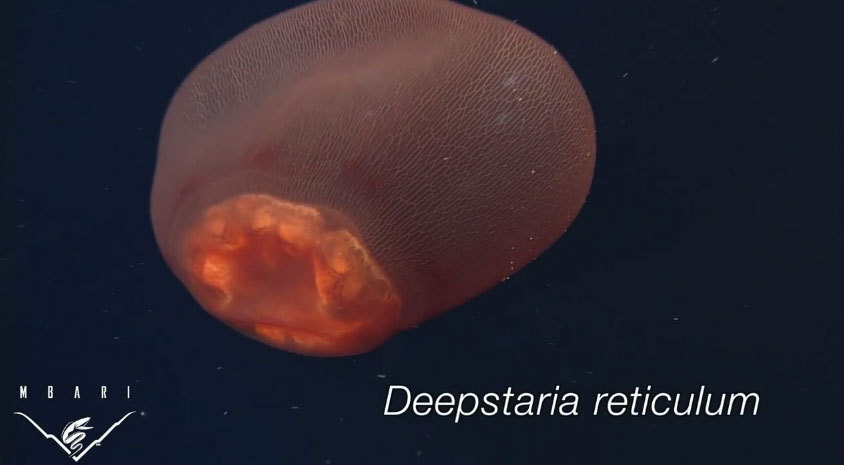 And maybe because the truth in this case was so much more fascinating than any fiction (I mean, Nessie seems tame compared to this), the Web, even the British tabloids, went straight for the truth. Everywhere, everybody was suddenly learning about a giant jellyfish — seen 29 times previously by marine biologists, but not by your average Jane and Joe, so this, as they say on NBC, was "new to you!" What could have been another zany viral video turned instead into a global science lesson ... which I hope will include you. Instead of an accidental peek at this jellyfish, I want you to see Deepstaria reticulum as it ought to be seen. If Vogue did fashion shoots of jellyfish, they would look like this.

Thanks to marine biologist Steve Haddock of the Monterey Bay Aquarium Research Institute (who does the narration), here's the supermodel version, dangerously glamorous: