Accessibility links
Can Plants Smell Other Plants? Apparently They Can : Krulwich Wonders... Plants, of course, don't have noses. But there is a vine that can smell the difference between a tomato and a stalk of wheat.

Do Plants Smell Other Plants? This One Does, Then Strangles What It Smells

Do Plants Smell Other Plants? This One Does, Then Strangles What It Smells

"Plants smell," says botanist Daniel Chamovitz. Yes, they give off odors, but that's not what Chamovitz means. He means plants can smell other plants. "Plants know when their fruit is ripe, when their [plant] neighbor has been cut by a gardener's shears, or when their neighbor is being eaten by a ravenous bug; they smell it," he writes in his new book, What a Plant Knows. They don't have noses or a nervous system, but they still have an olfactory sense, and they can differentiate. He says there's a vine that can smell the difference between a tomato and a stalk of wheat. It will choose one over the other, based on...smell! In a moment I'll show you how.

This talented plant is commonly known as the dodder vine. It's a parasite; tomato gardeners know it and hate it.

Here it is at Penn State University — look for the stringy, wiggly thing on the left — sniffing. Notice as it grows from a seedling, it moves in small, lazy circles, like hands groping in the dark, and then, gradually, it leans toward the stalk of the tomato plant — which it then entwines, gouges, sucks and strangles.

Ewww, you say. (I am assuming you are pro-tomato). But how do we know the vine is "smelling" that tomato plant? Enter Dr. Consuelo De Moraes, a biologist at Penn State. With her colleagues, she put the dodder plant to the test.

When she placed a dodder vine between an empty pot and a fake plant with no odor, the dodder didn't lean toward either... 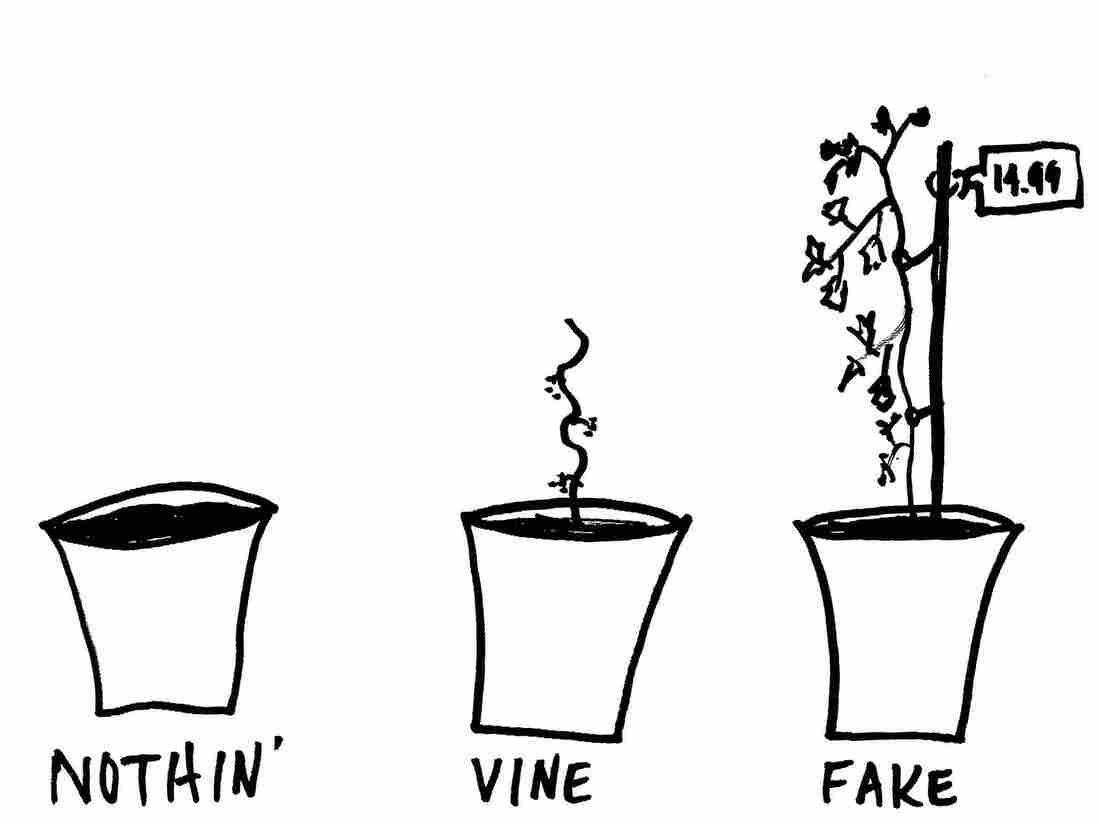 When she put a real tomato plant next to a dodder, it leaned in the tomato's direction, whether the tomato was (a) well lit, (b) in the dark, or (c) out of view. 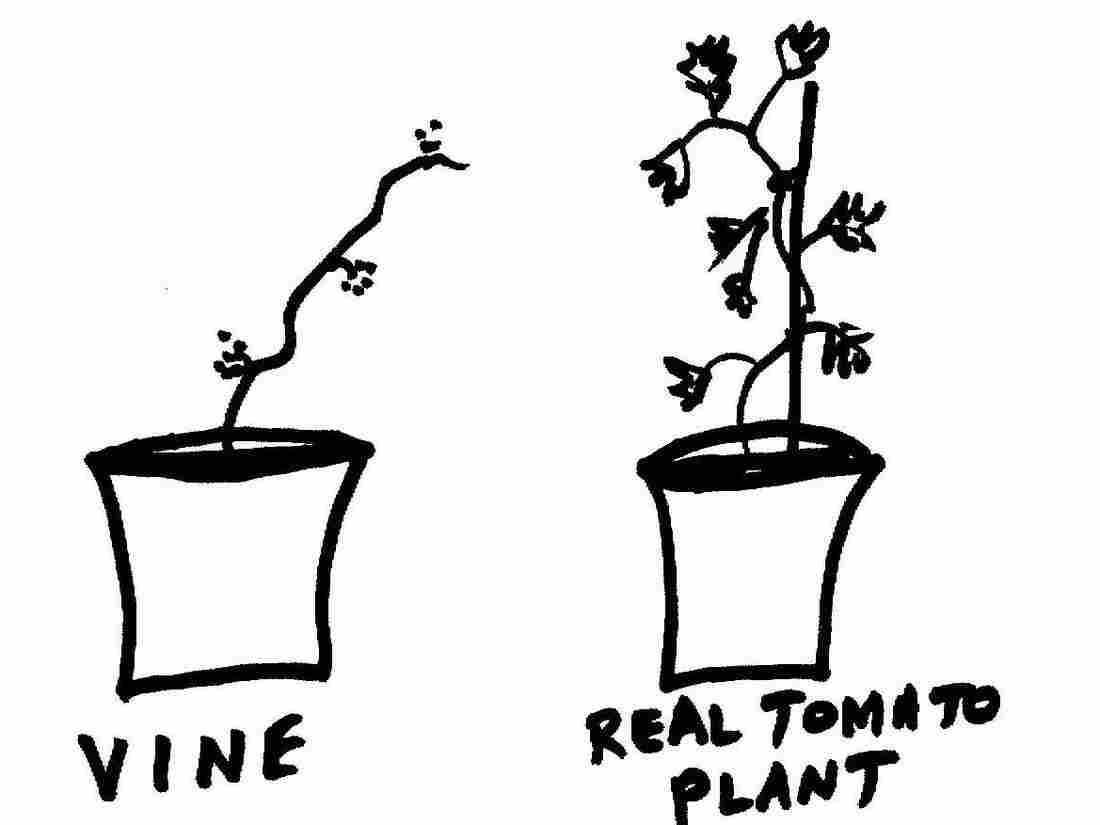 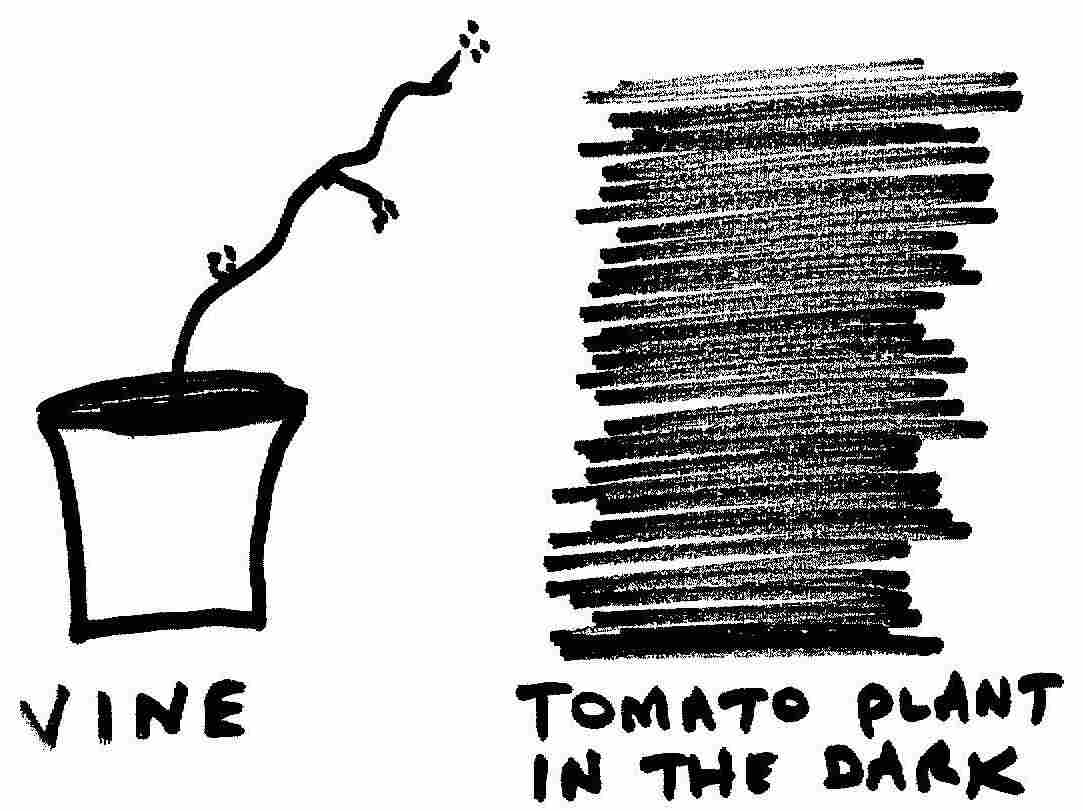 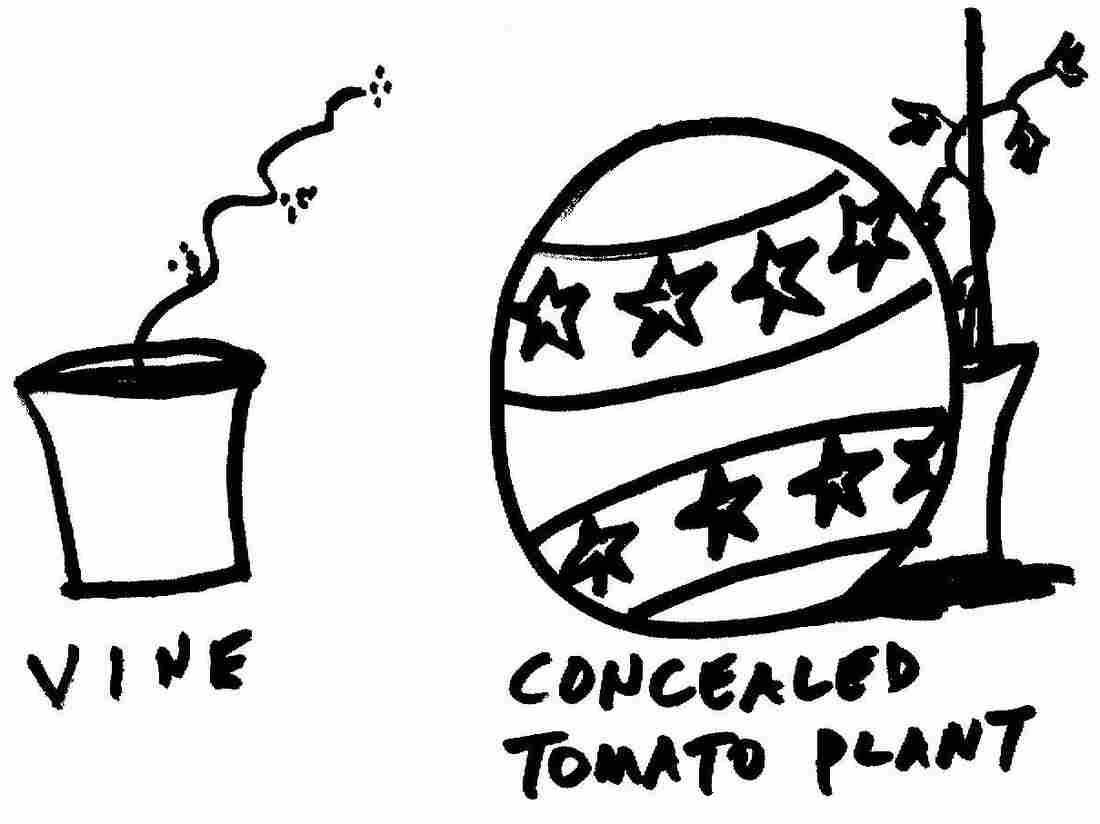 When she had her students put both the dodder vine and the tomato plant into a box connected by a hose, like this... 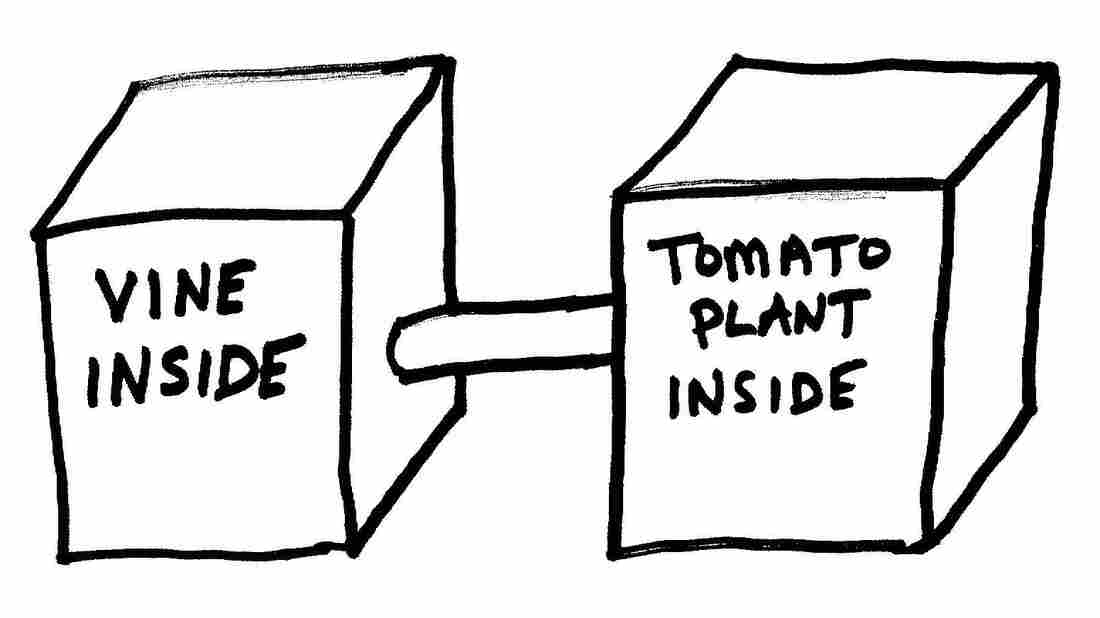 ...the air could blow from one box to another, and over and over again, the boxed-up vine always leaned toward the tube hole, toward the air wafting in from the tomato... 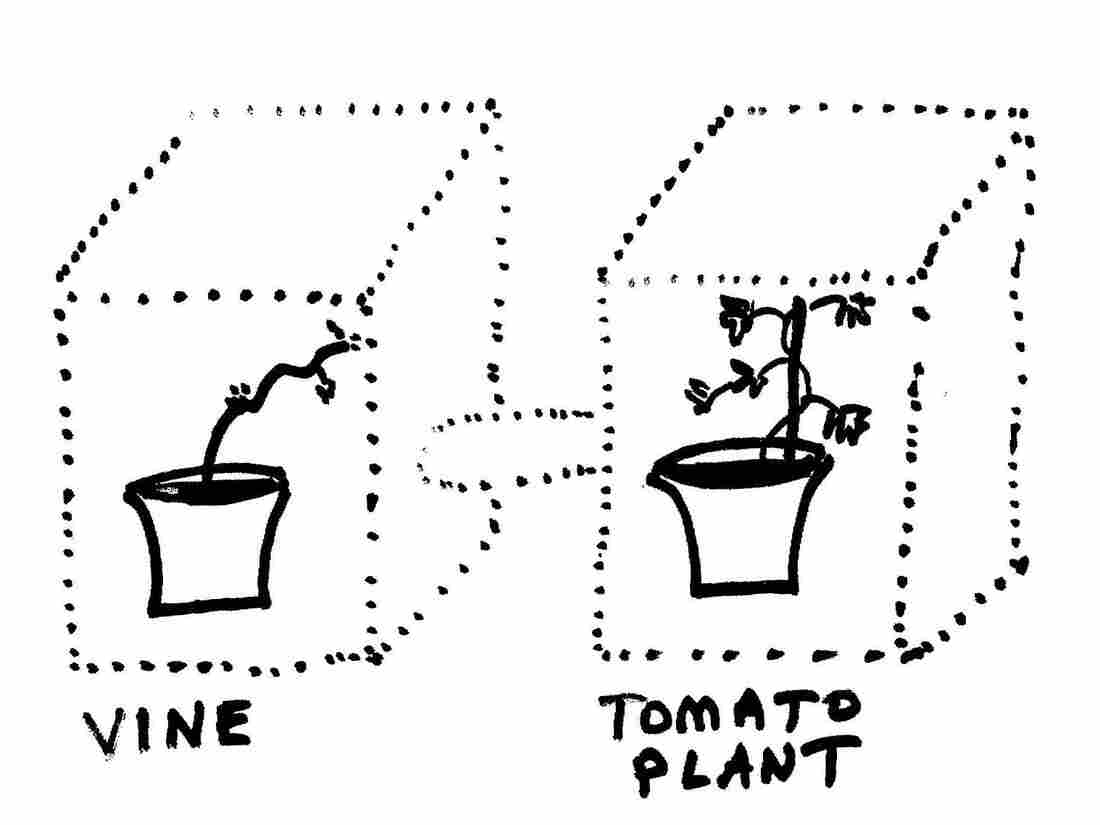 With sight and touch eliminated, it's fair to conclude the dodder was sensing odor to find food.

But now comes the Finicky Eater part. The dodder will also eat (or suck nutrition from) wheat plants. But it prefers tomato. We know this because when Professor De Moraes & Co. placed a dodder an equal distance from a wheat plant and a tomato plant... 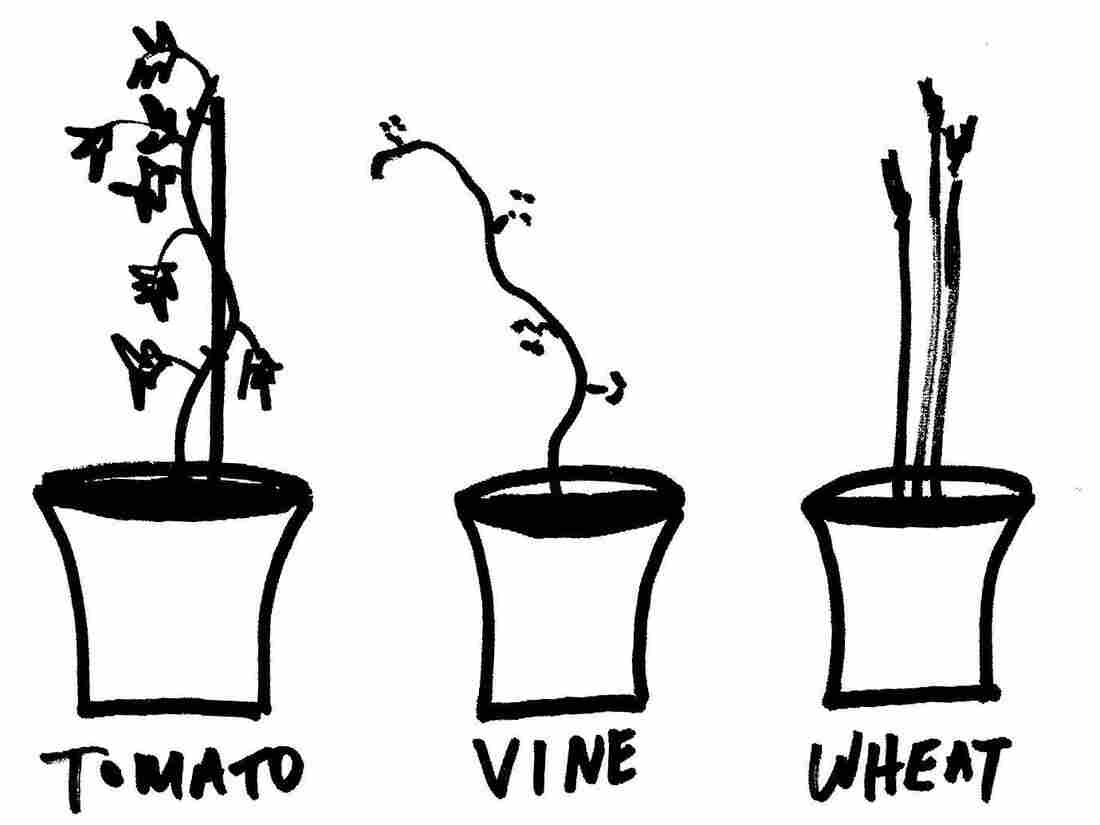 ...the dodder consistently went for the tomato. Which is interesting, says Professor Dan Chamovitz, because at the chemical level, wheat and tomatoes, he says, "are rather similar," but tomatoes combine three chemical smells that attract dodders, whereas wheat has only one attractant. That slightly different cocktail of odors pulls the dodder to the tomato, which means that plants can make odor distinctions that are quite subtle.

Yeah, But Is This The Same Thing As "Smelling"?

Well, says Chamovitz, "Plants obviously don't have olfactory nerves that connect to a brain that interpret signals...but [some plants] do respond to pheromones, just as we do. Plants detect a volatile chemical in the air, and they convert this signal (albeit nerve-free) into a physiological response. Surely this could be considered olfaction."

Tomato plants, if they had necks, would be nodding fervently.

Daniel Chamovitz' book is called What A Plant Knows: A Field Guide to the Senses.