Weekend Special: A Puzzle: Why Aren't They Laughing?

Weekend Special: A Puzzle: Why Aren't They Laughing? 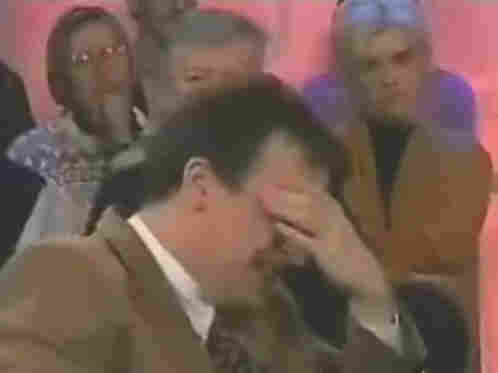 OK, I'm going to show you a video. It made me laugh so hard, my face hurt. But as I watched, I had this odd sense that there was something strange about it, but I couldn't figure out what.

So go ahead and take a look.

But first, to quickly summarize, since this show is from Belgium and unless you're a Flem or a Walloon (that's who lives there, right?) you're not going to understand a word. Erik Hartman, a Belgian TV personality, is talking to two people who've had some medical problems. He asks them something. They answer. When the man speaks, he has an extraordinarily high falsetto voice, so high, it would make even sober people giggle.

That's what Erik does. He giggles. He's mortified, and tries to cover it up, but the giggles keep coming and coming because the man keeps speaking, so Eric desperately turns to the audience, hoping to get sober, but because this is not his lucky day, the first questioner to raise his hand has a voice that's even stranger than Mr. Falsetto. Then all hell breaks loose.

OK. Now here's what got to me...but don't read past this point till you've seen the video. I don't want you to know too much.

Did you notice the audience? How come no one in the audience, not a one, is laughing? Or even smiling? I am rolling on the floor, and these people are cold sober. It seems unnatural and seems to contradict what neuroscientist Robert Provine says about laughing — that it's contagious, that "we laugh when we hear other people laugh. This is an automatic kind of thing." I thought, could this be evidence that Provine's theories need amending?

Unless there's a good explanation for why the audience is so grim: Is it something about being Flemish? Or maybe it's what the man and woman are saying; maybe their experiences are so horrific that Eric's humiliation is less, and their humiliation is greater. So, I hunted for a translation and found one, and discovered that one victim had a tumor operation, the other was operated on for laryngitis (what?), but the two victims didn't give many, or any details...If you want to, you can watch the whole thing again, and see if what they say would make you unable to smile at Erik's predicament.

Something's still wrong. Somebody, one of those people in the background, should be at least smirking. And that's when my NPR colleague Adam Cole pointed out that the translated version of the show on YouTube comes with a comment section, and one of the first comments said go to Wikipedia and look up "Erik Hartman." So I did, and this is what I found:

"Erik Hartman" is a character played by Tom Van Dyck, a Flemish comedian and actor.

So the whole thing was made up. Adam already knew, but what we are watching here is a scene from an episode of a Flemish comedy show that ran on Belgian TV from 2000 to 2002. This is a "mockumentary" telling the story of how a "famous" TV personality, "Erik Hartman," lost his job and his career in one horrible, live-on-TV gigglefest. It's extraordinarily well done, and most internet viewers watching around the world would have no notion that this was a fiction, but it is, which should be a great relief to neuroscientist Robert Provine, our leading theorist on the science of laughter.

Real laughter, it seems, is still contagious. Even in Belgium.

Professor Robert Provine is a neuroscientist at the University of Maryland, Baltimore County and the author of Laughter: A Scientific Investigation. Dr. Provine appeared on our Radiolab show, "Laughter."