Accessibility links
What The Vampire Said To The Horseshoe Crab: 'Your Blood Is Blue?' : Krulwich Wonders... The blood of horseshoe crabs is bright blue, not red like ours. The "jack-of-all-trades" creatures are built to last, and the blood can do amazing things. That makes it incredibly valuable to drug companies and researchers.

What The Vampire Said To The Horseshoe Crab: 'Your Blood Is Blue?'

What The Vampire Said To The Horseshoe Crab: 'Your Blood Is Blue?'

I'd never seen this before, because I thought it was just a figure of speech referring to kings and noblemen. But in real life, there are creatures that have blue blood — literally blue — like this: 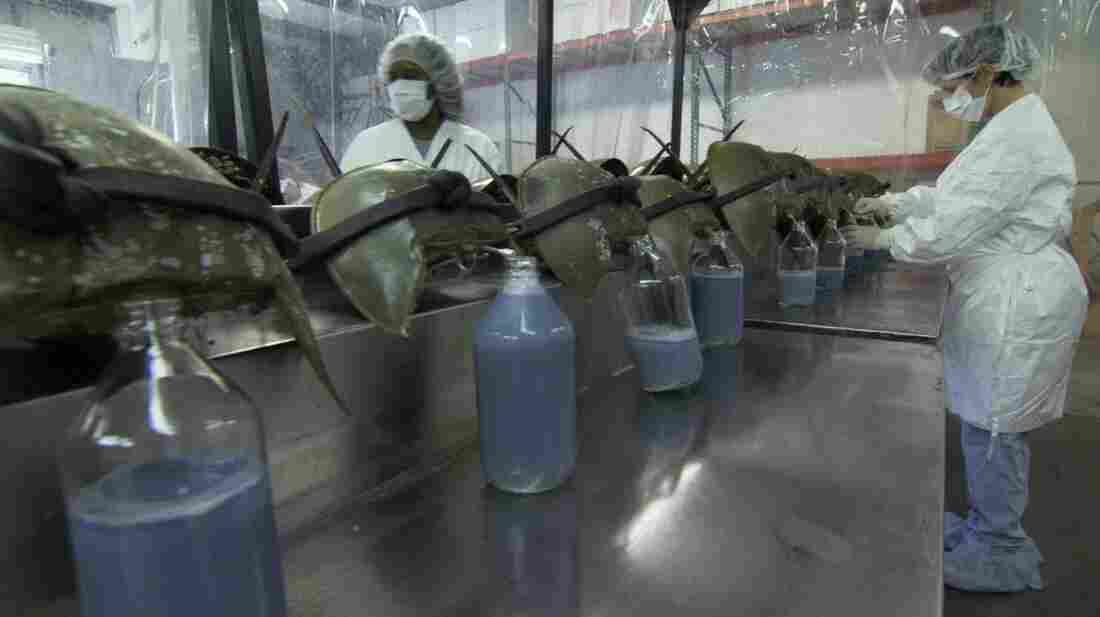 Enlarge this image
Courtesy of Thirteen/WNET/PBS 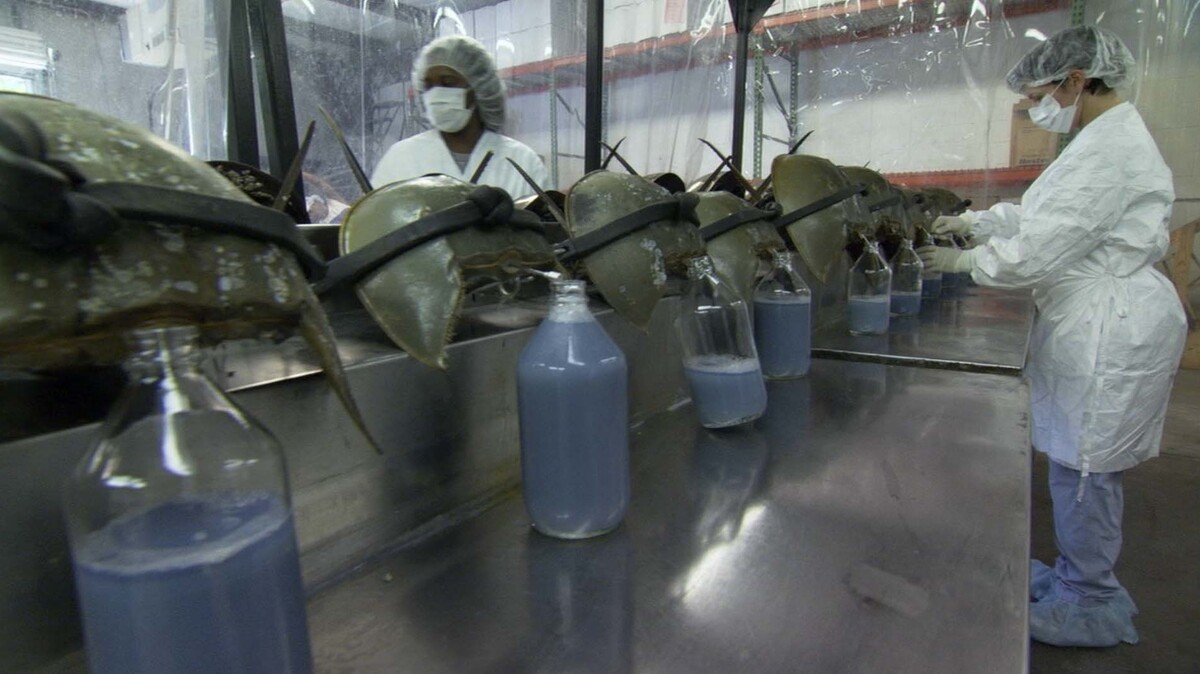 This is horseshoe crab blood. Yes, those armored, tank-looking animals that crawl up onto beaches. You can see them, especially this time of year, up and down the Atlantic coast, where they gather late at night in enormous numbers to mate. You know these guys. 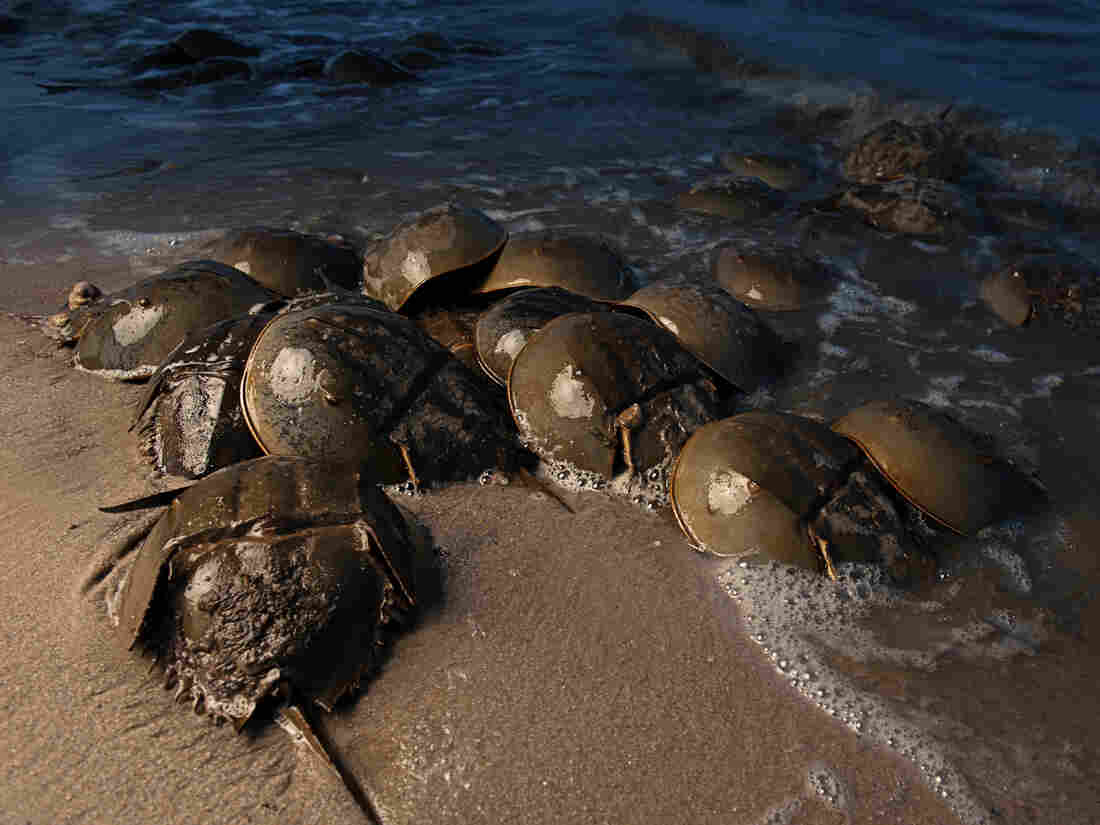 How do horseshoe crabs come to have blue blood? The phrase traditionally means blood which flows in the veins of old and aristocratic families, and horseshoe crabs are certainly old (they lived with dinosaurs), and, in their way, aristocrats. But they don't have veins. Their blood kind of sloshes around in their bodies carrying oxygen to various organs, as our blood does.

Our blood is red because we use hemoglobin to move oxygen around. Hemoglobin has iron in it, which gives off a reddish hue. (Think of rust.) Horseshoe crabs use a copper-based molecule called hemocyanin to distribute oxygen. In nature, copper turns things blue or blue-green. So that's why their blood is blue; it's copper-based.

But their blood does things our blood can't. Amazing things. "They are tough, jack-of-all-trades kind of creatures, built to last," says paleontologist Richard Fortey in a new book. "They remind me in a way of a Volkswagen Beetle that I once owned."

Fortey tells of sitting in the dark on a Delaware beach, watching tens of thousands of horseshoe crabs clumping and clonking about, trying to mate, when he noticed that like his old car, a lot of them were in pretty bad shape:

I saw a damaged horseshoe crab still trundling gamely onwards, even with a great hole punched right though its head. Looking over the beach more carefully, I noticed a lot of these war veterans; lumps out of the thorax, broken tail spikes — clearly, it must take a lot to finish these creatures off.

Indeed. It turns out a when a horseshoe crab gets gashed and its insides are exposed to germs (particularly ocean-going bacteria), its blood leaps into action. As soon as it senses any "negative bacteria" moving in, a particular blood cell explodes, releasing a mass of blood-clotting granules that instantly clot to seal out the bad guys, preventing further infection. It's like having an instant Great Wall of China, springing up to keep out the Barbarians.

In 1968, scientist Fred Bang was able to extract cells from the horseshoe crab and use the active ingredient to test drugs, products and devices that come into contact with blood, including human blood. If the cells clot, that means those products have been contaminated by "negative" bacteria, a very useful alarm system. All of a sudden, horseshoe crab blood became valuable.

Atlantic coast fishermen would catch crabs, remove blood, sell the serum to pharmaceutical companies (one quart is worth more than $10,000) and then return the animals to the bay. This has become a successful business, as you can see here, with bottles and bottles of blue blood harvested from crabs hooked up to blood sucking machines. (Look if you like, but this video isn't for everybody.)

I can't imagine what it's like for a critter designed 450 million years ago to find itself in a chrome room, hosed up, getting dizzy, then being trucked back to the water. Nothing in their genome could prepare them for this.

And for some, it's overwhelming. 3 to 15 percent of these crabs die after being bled. Carl Shuster, a local biologist, author of The American Horseshoe Crab, worried that the bay population was beginning to suffer and convinced the fishermen and the federal government to create a horseshoe crab preserve in the Delaware Bay.

That preserve appears, so far, to be working. These "trundling, heaving, inelegant" animals are recovering their numbers, which is as it should be.

"Now we know why dented and holed crabs can totter on regardless," Fortey writes. "They have had hundreds of millions of years to come up with an effective response to some of their most dangerous and invisible [bacterial] enemies." We've borrowed their secret, so it would be very bad manners not to say thank you.

This time, we seem to be behaving properly. So far, anyway.

Richard Fortey's new book, Horseshoe Crabs and Velvet Worms visits with animals that have survived, unchanged, over vast stretches of time. Horseshoe crabs (they're not really crabs, they're more closely related to insects like millipedes and spiders) and especially horseshoe crab eggs, were discussed in a previous blog post about a migratory bird called the red knot.