Accessibility links
No Medical Miracles Allowed On This Plane, Airline Says : Krulwich Wonders... Years of research went into the development of a rejection-resistant trachea transplant. But a doctor wasn't allowed to board a plane with the specimen just hours before the surgery.

No, said airline security, you can't take this bottle onboard. It exceeds the 100 milliliter limit; it's forbidden.

We have just 16 hours to get it into her body.

But wait, said professor Martin Birchall of Bristol University. This is a medical container. Inside is a trachea, a carefully constructed human windpipe, seeded with 60 million stem cells from a very sick woman in Barcelona. We have just 16 hours to get it into her body. We pre-arranged this.

We have no record of your request, said the airline.

You do have a record, said the professor. There's a woman in Barcelona right now who needs this, and we are running out of time. It took us five months to create this organ. It is the first of its kind. We must board this plane.

Sometimes, leaps in medical science require an agreeable security guard, and on this day in 2008, he wasn't playing. The guard, then his supervisors, said no. Being larger than 100 milliliters, the bottle was categorically dangerous material. If Birchall insisted on boarding the plane, he would be arrested. Birchall had no Plan B. What was he to do? This is a true story. 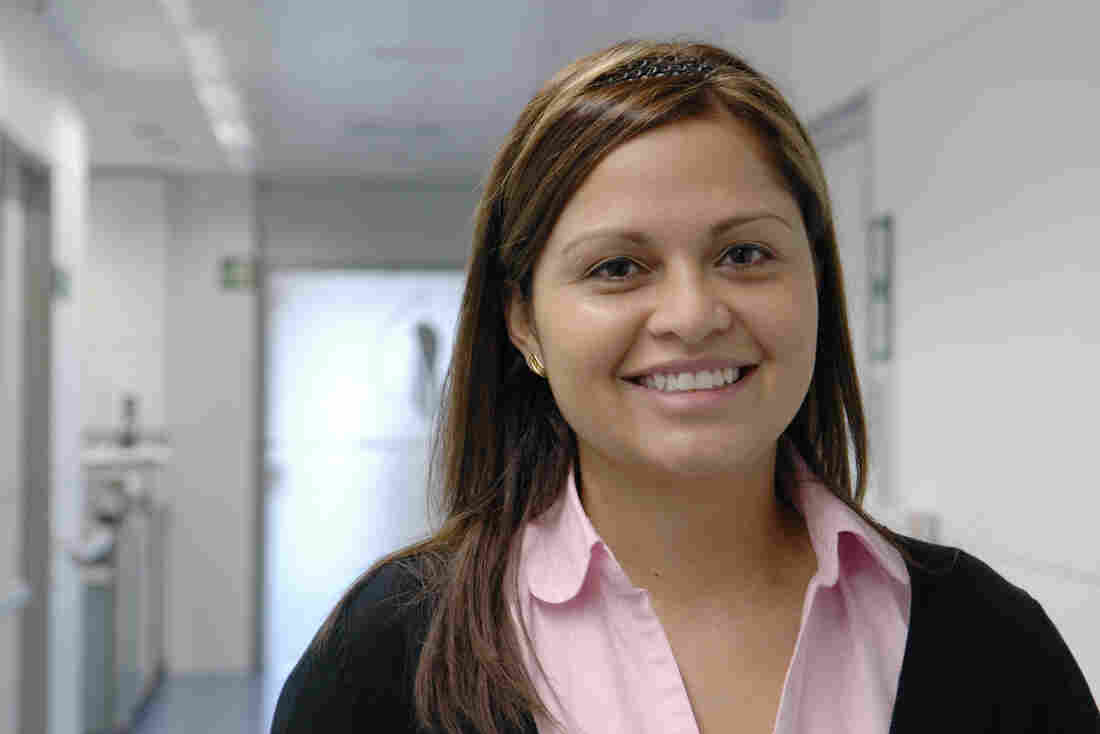 Claudia Castillo was 30 when she received a transplanted trachea infused with her own cells. Hospital Clinic of Barcelona/AP hide caption

Claudia Castillo Had A Problem

It begins when Claudia Castillo, a 30-year-old Colombian mother living in Barcelona, developed a cough. She went to her doctor, but the diagnosis took a while, and soon she was coughing constantly, short of breath; couldn't work, clean, shop or cook. It was getting harder to look after her two children. She was hospitalized and told she had tuberculosis.

The doctors gave her two options. She could have her left lung removed, or she could try a transplant. But this transplant, they told her, had never been done before. She would be a pioneer.

The tuberculosis had damaged her trachea, a tube about 4-to-6 inches long that lets air flow from the larynx to the lungs. Normally, people who need new tracheas get them from donors, usually dead ones. There is a waiting list. Because the organ used to belong to someone else, once it is placed in a new body, native cells sense foreigners in their midst and attack. People who receive donor organs have to take immunosuppressant drugs for years, though it makes them vulnerable to all kinds of diseases.

Working with a team in Sweden, he got a trachea for Claudia, as usual, from a donor. But this time they washed it clean of all surface cells, leaving only the skeleton structure underneath. Then, they surgically removed some stem cells from Claudia's bone marrow and shipped them to Bristol University in Britain, where Birchall got them to multiply by the millions and fed them a broth designed to turn them into tracheal cells. 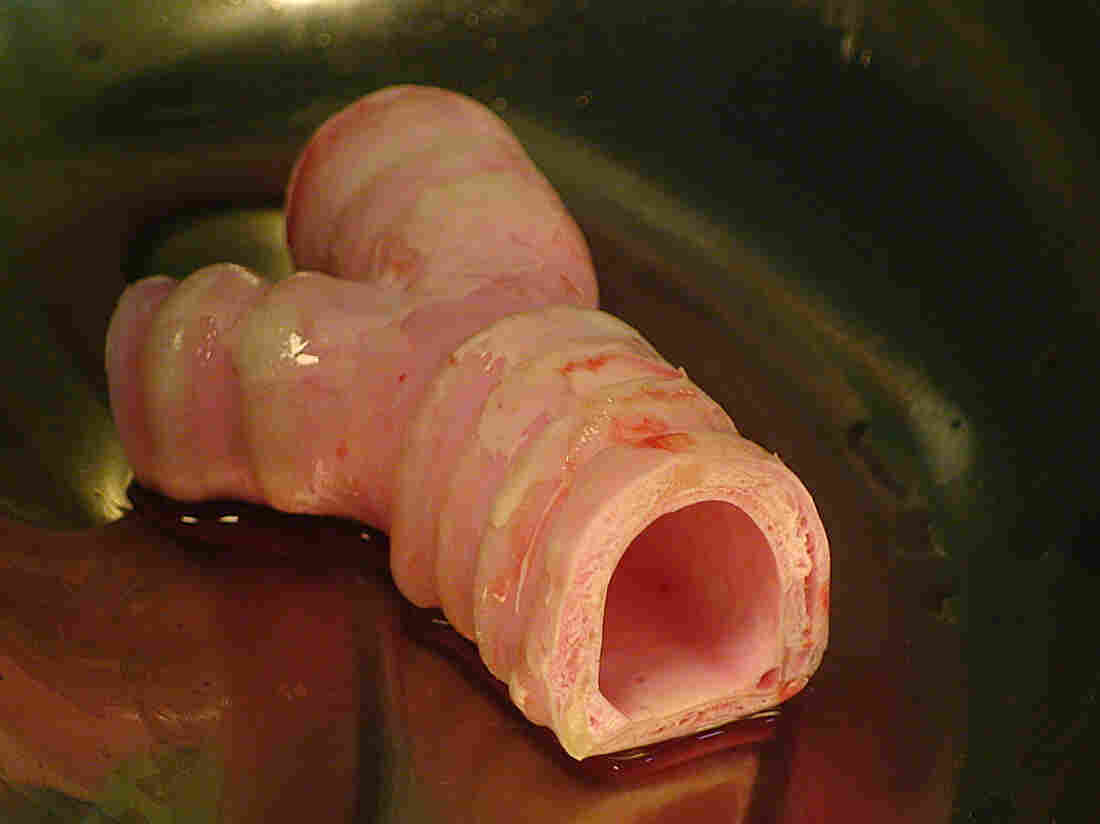 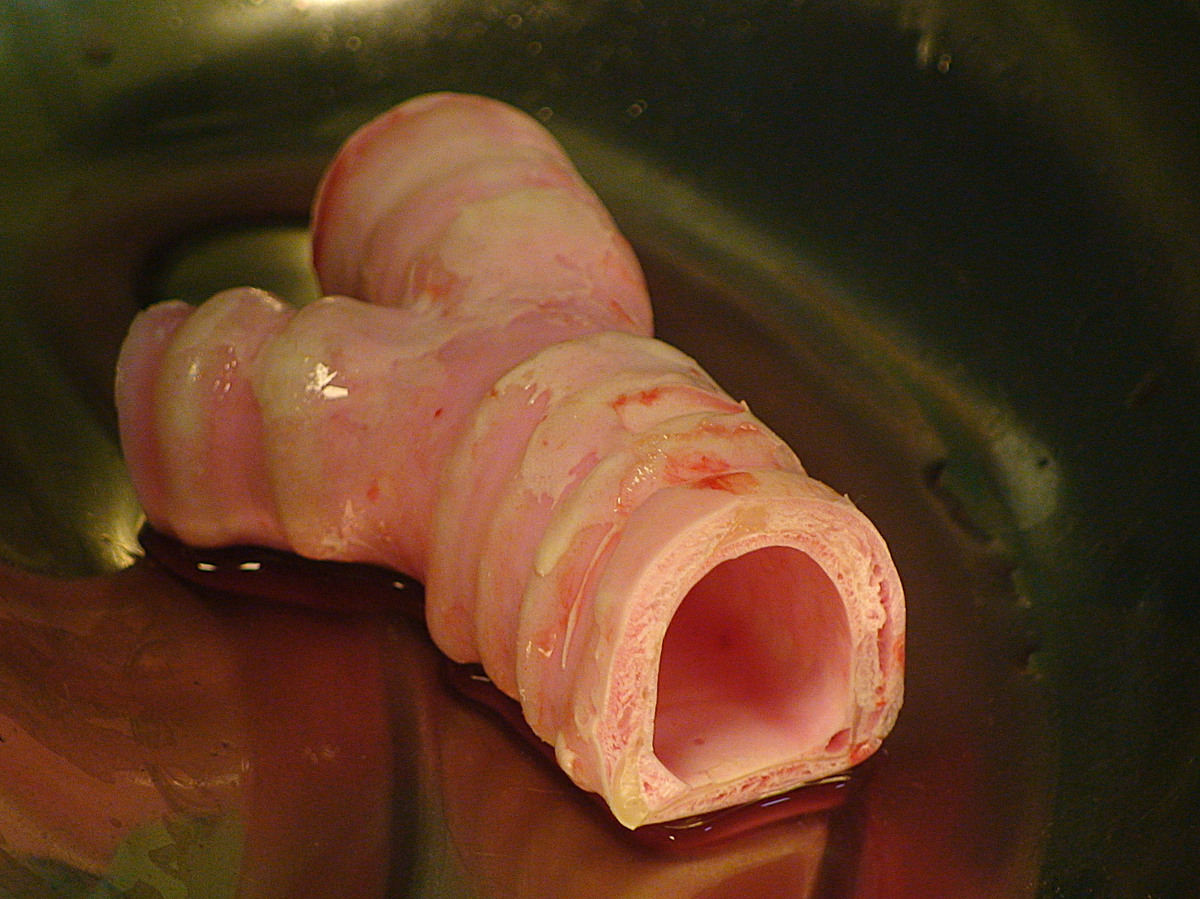 The section of trachea with two days of cell growth, immediately before Castillo's implant surgery.

Now comes the We've Never Done This Before part: The trachea was then "dipped" into a bath of Claudia's cells, to see if they would attach.

A company in America, Harvard Bioscience Inc., of Holliston, Mass., makes a shoebox-sized "bioreactor" for just this purpose. It looks like a rotisserie for barbecuing chickens.

Birchall and his team took the new trachea, mounted it onto a rotating drum, and then dropped it into a nutrient medium so Claudia's cells would grow and spread, then lifted it out, so the cells could get oxygen, then dumped it back in again. In, out, in out, until ... the underlying Y-shaped scaffold was covered with Claudia's cells. This trachea now was Totally Claudia on the outside.

That done, Birchall's team booked the only direct flight from Bristol to Barcelona, operated by an airline called easyJet. Birchall insists he had "several conversations" with the airline to make sure everything would go smoothly. The trachea had 16 hours to get into Claudia. That's when easyJet said no.

You Never Asked, Says The Airline

EasyJet spokesman Andrew McConnell later told the BBC, "We do not have any record of the passenger's request to carry medical materials onboard the flight." The request, he said, should have been to the easyJet call center in Poland. Birchall told reporters he had gone to the Bristol Airport ahead of time and was given specific packaging instructions, which he carefully followed. The airline spokesman said a check of company files found no such request. Birchall says the records should be there. The airline told reporters it would "rule out" the possibility the airline misplaced a file.

At the gate, discussions grew more and more heated. Birchall says he got "furious" and was almost arrested. If we fail to deliver the cells, he said, years of work would be wasted and scientists will miss a "major breakthrough for surgery and science."

Young Med Student To The Rescue 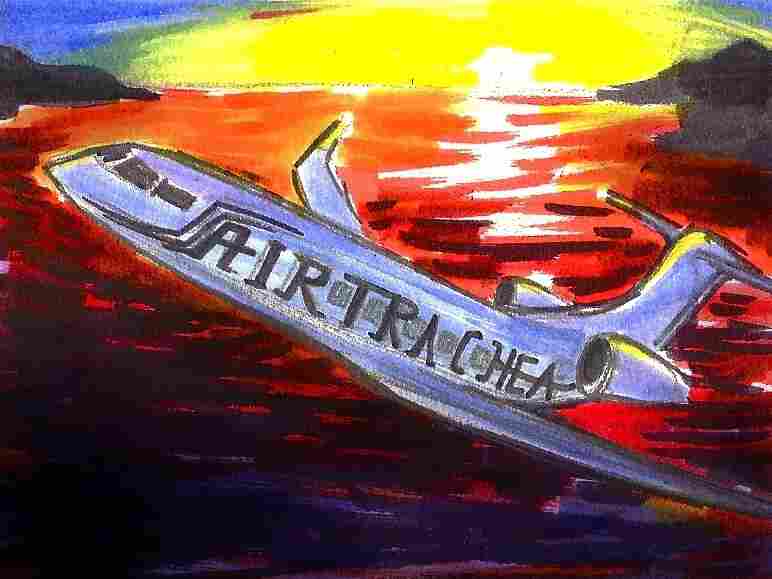 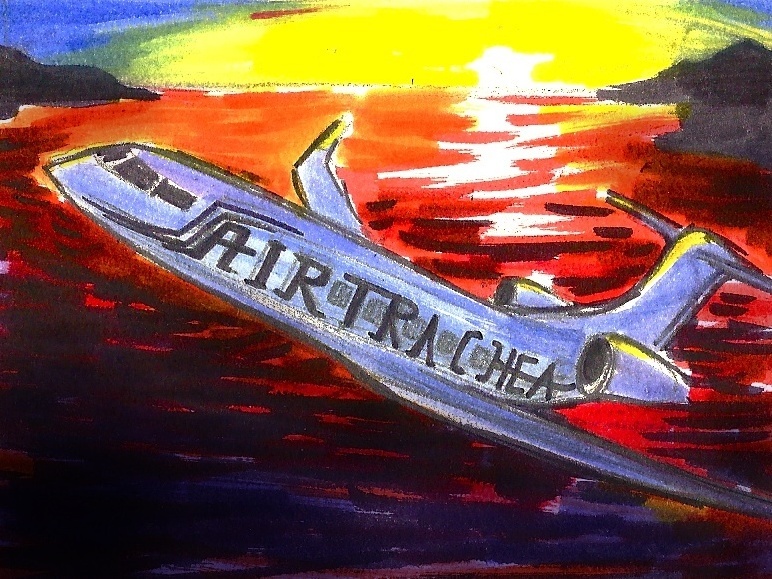 At this point, the medical student who was going to take the organ to Barcelona, Philipp Jungerbluth, told Birchall that he had a pilot friend in Germany with a small jet who could come immediately to Bristol, take the container and fly it straight to Spain. Calls were made, the friend agreed to do it for "cost" — 14,000 pounds (about $21,000) and Birchall paid on the spot. (He was later reimbursed by his university.)

We have no record of your request, said the airline.

Philipp, instead of flying on easyJet, took the trachea to Barcelona with his pilot friend and later told science writer Mark Stevenson that easyJet "wouldn't even refund the 70 pounds for the original ticket."

The trachea did make it to Barcelona, and then into Claudia Castillo. Ten days after her operation, Castillo was discharged from the hospital. Within weeks, her lung function rebounded. Tests showed she was back to normal for her age, and doctors found no antibodies that would indicate her body was rejecting the transplant. The Guardian reports that later she called up her doctor to tell him she'd been dancing that night in a club in Ibiza. 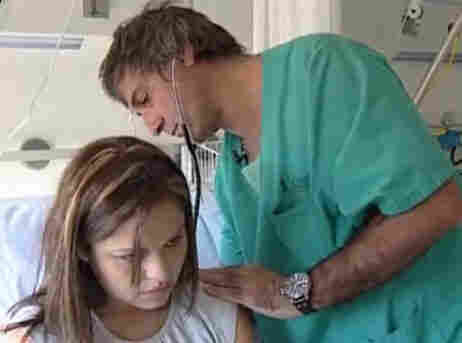 A frame from 'A revolution in surgery.' guardian.co.uk hide caption

Since then, there have been seven more such operations, where donated organs were stripped, then swabbed with stem cells, then placed in patients. And more recently, Macchiarini has gone the final step.

Amazingly, he doesn't do transplants anymore. Tracheas, he has decided, can be regenerated from scratch, using stem cells.

No Organ Donors Necessary: We Build 'Em From Scratch

Last year, as my NPR colleague Richard Knox reported at the time, Macchiarini had a patient, a 36-year-old student in Iceland, who was suffering from an advanced case of tracheal cancer. Tumors were closing in on the windpipe, threatening strangulation. Doctors took 3-D pictures of the man's trachea, then constructed a facsimile in glass, surrounded the glass frame with a porous plastic called polyethylene glycol and infused that with the patient's stem cells. The cells, fed a soup that would induce them to become trachea cells, did what they were told, and after a week, the man had a new, totally artificial trachea made from his own cells. He hasn't needed anti-rejection drugs since. He is now cancer-free.

What Will They Do Next? 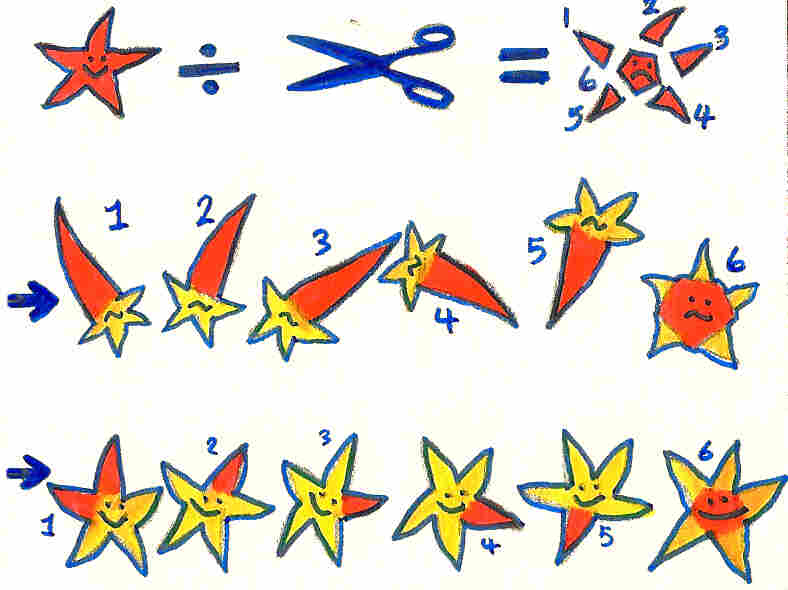 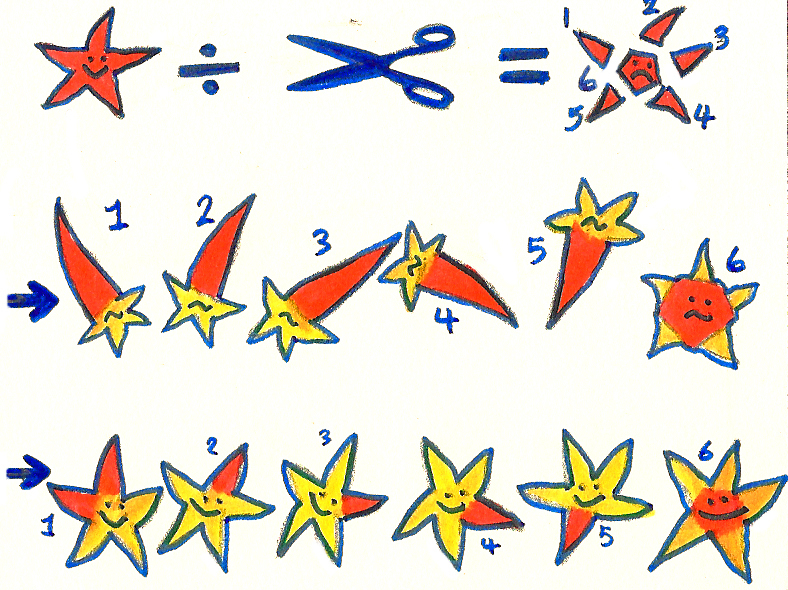 Clearly this is a new frontier. There will be wins, losses, but it feels as if we have crossed a line. For years I have marveled at the lucky animals who oh-so-casually regenerate body parts. Worms do it. So do newts and salamanders, and damaged starfish practically reclone themselves.

With these new stem-cell therapies, we can, in a modest way, begin to do it too. We are learning how to regenerate parts of ourselves, by ourselves.

What Macchiarini did with the trachea is now being tried for blood vessels, urethras and bladders — all simple organs, basically tubes, or in the bladder's case, a sphere.

Can I Print You A Human Kidney?

The organs we really need, the ones in short supply — hearts, livers, kidneys — are much harder to regenerate because those organs open, close, pull, push and are thick with blood vessels, which makes them much more complicated. But when you see what's being imagined, when you see the TED talk where Dr. Anthony Atala uses a printer — an inkjet printer! — to create what will one day, maybe, be a human kidney — he's got this fleshy, wet prototype sitting floppily in his hands, and the audience, enthralled, gives him a standing ovation — you have to think miracles are about to happen.

Here's one I can imagine, and mind you I'm making this up: I'm thinking of an airport security guard, one of those really zealous ones, who knows the rules and knows they Must Be Obeyed. With his permission, I extract a small sample of stem cells, drop them in a Wisdom Broth where they grow and multiply, are mounted onto an artificial scaffold and inserted deep in his frontal cortex. A day later, our guard leaves the hospital, returns to work and, astonishingly, allows scientists to carry important medical packages onboard, even though they are bathed in more than 100 milliliters of liquid!

Crazy, you say? Impossible? Just wait. Wonderful things are about to happen.

If you'd like to see Claudia Castillo and her doctor, here's a short video from The Guardian.

Dr. Paolo Macchiarini's paper describing the operation can be found here. The Los Angeles Times had a good analysis here.