Accessibility links
If You Are Hit By Two Atomic Bombs, Should You Have Kids? : Krulwich Wonders... Tsutomu Yamaguchi was late for work in August 1945, in Hiroshima, Japan, when he saw an airplane drop a silvery speck into the air. He survived the bombing only to make his way to Nagasaki three days later...just as that city was bombed, too.

Tsutomu Yamaguchi was late for work. It was August 1945, and he'd just finished designing a 5,000-ton tanker for his company, Mitsubishi. He was heading to the office to finish up, clear out and head home, and that's when he saw the plane, high up in the sky over Hiroshima. He watched it drop a silvery speck into the air, and instinctively, says science writer Sam Kean, "he dove to the ground and covered his eyes and plugged his ears with his thumbs." 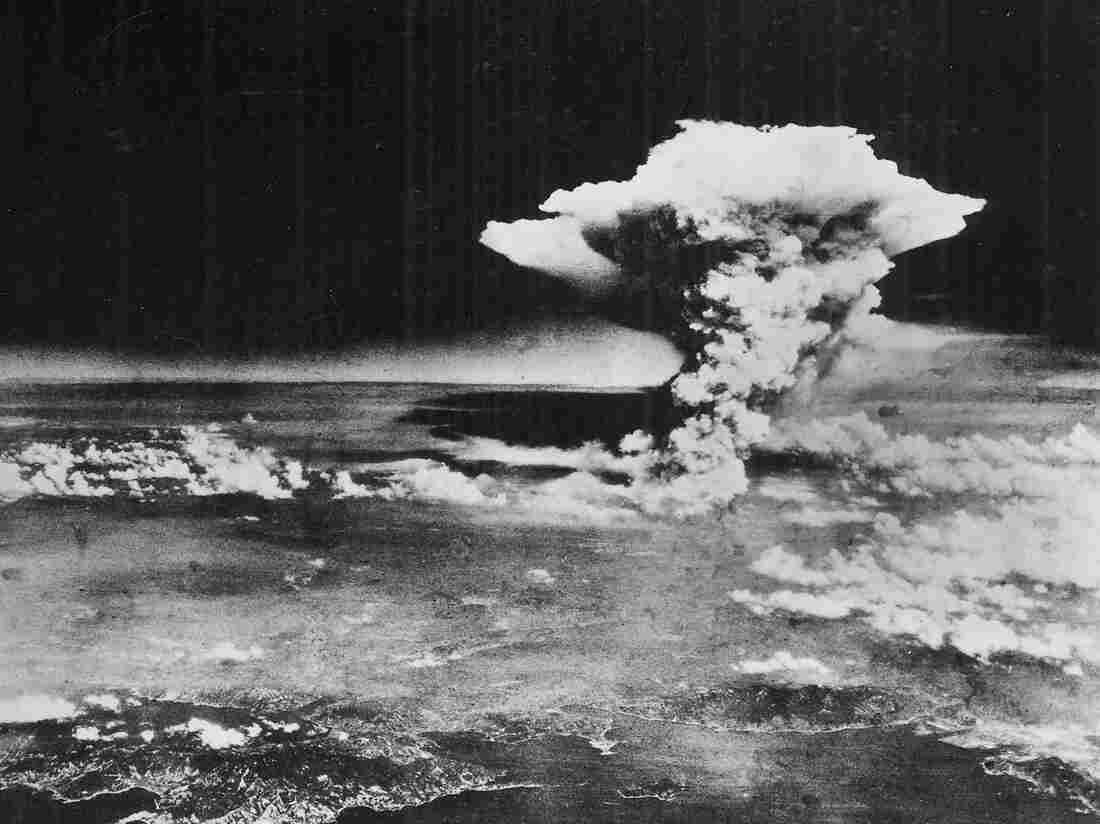 This was no ordinary bomb. The earth below shook, Yamaguchi was thrown up in the air, then smashed down and lost consciousness.

He tried crawling across a logjam of corpses...

When he awoke, the city around him was dark, though it was early morning; above him was a towering cloud of ash. His skin was hot, his forearms (where he'd rolled up his sleeves) were sunburned. Not knowing what to do, he headed numbly to Mitsubishi headquarters. It wasn't there. The building had dissolved into a mess of rubble.

So with nowhere to go and desperate to get away from the destruction and the burned bodies, he heard a rumor the railroad might still be working. He decided to head for the train station, which was across a river. The bridges were down. He tried crawling across a logjam of corpses, but couldn't cross, then found a single railroad beam and made it to the other side, where, amazingly, trains were indeed leaving for other cities. He pushed himself onto one heading southwest to his hometown...Nagasaki. 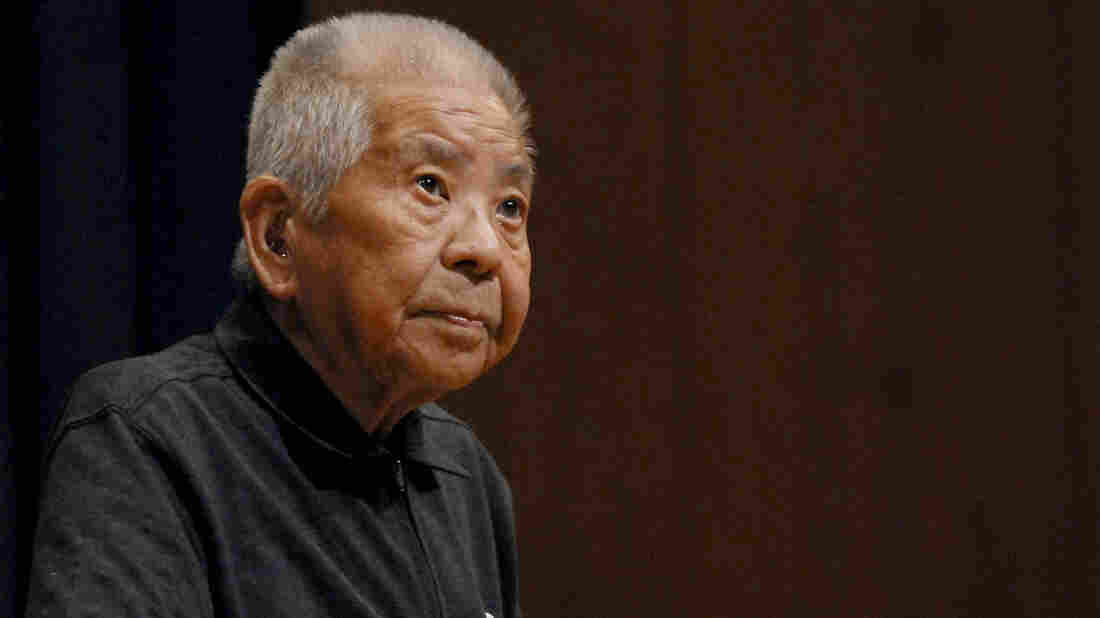 When the blast hit Hiroshima, Yamaguchi was less than a mile and a half from ground zero. The explosion sent supercharged gamma rays flying out in all directions. When those rays hit Yamaguchi, they no doubt damaged the DNA in his cells, breaking some of the chemical bonds inside. At the time, no one knew if the DNA molecule could survive a gamma ray assault. The assumption was the damage would be serious and probably inheritable, that bomb victims would be cursed for multiple generations. Hermann Muller, who won the Nobel Prize in 1946 for his work on radiation, told The New York Times that if atomic bomb survivors "could foresee the results 1,000 years from now...they might consider themselves more fortunate if the bomb had killed them."

In his new book, The Violinist's Thumb, Sam Kean (a Radiolab regular), describes what happened next. In the short run, DNA damage creates radiation sickness, (headaches, vomiting, internal bleeding, peeling skin, anemic blood) and all that happened to Mr. Yamaguchi. He found his wife and 2-year-old son, rested for a day (or rather, went in and out of consciousness), and then, on Aug. 9, he headed to Mitsubishi offices in Nagasaki to hand in his assignment. When he arrived, he told his boss about the strange new bomb that had evaporated parts of Hiroshima, but the boss, writes Sam, didn't believe him.

"You're an engineer," he barked. "Calculate it. How could one bomb...destroy a whole city?" Famous last words. [At that moment] a white light swelled inside the room. Heat prickled Yamaguchi's skin, and he hit the deck of the ship engineering office. "I thought," he later recalled, "the mushroom cloud followed me from Hiroshima."

Japanese researchers later learned that roughly 150 people were unlucky enough to be in both in Nagasaki and Hiroshima when the bombs hit, but very few, only a handful, were in both blast zones, within 1.5 mile zone of intense radiation. Across Japan, the assumption was that these people shouldn't have children, that the gamma ray damage would be too heavy, too long-lasting to make child bearing safe.

'You're an engineer. Calculate it. How could one bomb...destroy a whole city?'

Shall We Have Children?

But by the early 1950's, Yamaguchi and his wife Hisako felt strong enough to try, and the early 50s, they had two girls, Naoko and Toshiko. Both were born without birth defects, though when they reached their teenage years, they said they got sick more often than some of their friends. Both are still alive. The Yamaguchis' young son, Kasutoshi, lived to be 58 and died of cancer.

What Happened To The Wife?

Mrs. Yamaguchi died in 2008 of liver and kidney cancer when she was 88. "The Nagasaki plutonium bomb probably caused both of her cancers, yes, " Sam writes, "but at those ages it's conceivable that [she] would have gotten cancer anyway, for unrelated reasons."

What Happened To The Kids?

While the Yamaguchi children may have had a slightly rougher time (their parents being triple blasted, he twice, she once), the big surprise is that after almost 70 years, there is no evidence of lasting DNA damage into the children of atomic bomb victims. A broad survey found no subsequent epidemic of birth defects, no high incidence of cancers. No large scale studies, says Sam, "have ever found significant evidence that these children had higher rates of any disease, or even higher rates of mutations. ... In the vast majority of cases, genetic fallout didn't settle onto the succeeding generation."

DNA To Its Own Rescue

DNA, it seems, has an extraordinary talent for mending itself. "After three-plus billion years of being exposed to cosmic rays and solar radiation," Sam writes, this essential molecule has apparently picked up ways to repair breaks in its structure. While no one wants to meet up with an exploding nuclear weapon, there is something remarkably resilient about a molecule that can take the hit (or a double hit) and stitch itself back into business — as Mr. Yamaguchi's story illustrates.

He, amazingly, lived for another 65 years after the attacks on Hiroshima and Nagasaki. He died, of stomach cancer, in 2010. He was 93 years old.

To hear Mr. Yamaguchi's story in more vivid detail (with extra attention to the mysteries of DNA repair) listen to our Radiolab Podcast.

What happened to bomb victims in Nagasaki and Hiroshima may not be the fate of people who lived near Chernobyl in Ukraine. For one thing, the Chernobyl meltdown released different types of radioactivity, fewer gamma rays and more radioactive poisoning from cesium, strontium and iodine — which can do more harm at close range. Plus, Soviet officials made matters much worse by allowing cows to graze on grass downwind from the accident, and didn't destroy crops that had absorbed the radioactive waste, so people continued to eat and drink contaminated produce. When you continue to expose the body to radiation, you get sicker more often. When Japan had its recent Fukushima Daiichi nuclear power plant accident, the Japanese confiscated most contaminated food and drink within six days.

Sam Kean's new book, which explores what we have learned about genes in the 10 years since the human genome project, is called "The Violinist's Thumb, And Other Lost Tales of Love, War, and Genius, As Written By Our Genetic Code."

Read an excerpt of The Violinist's Thumb