Accessibility links
Frozen And Blushing Forever : Krulwich Wonders... How would you like it if the last thing you did on Earth was really, really embarrassing?

Not that you'd care, because you're dead, but how would you like it if the last thing you did on Earth was really, really embarrassing — like trying to gulp down a meal that's flip-flopping wildly in your mouth, tail out ... 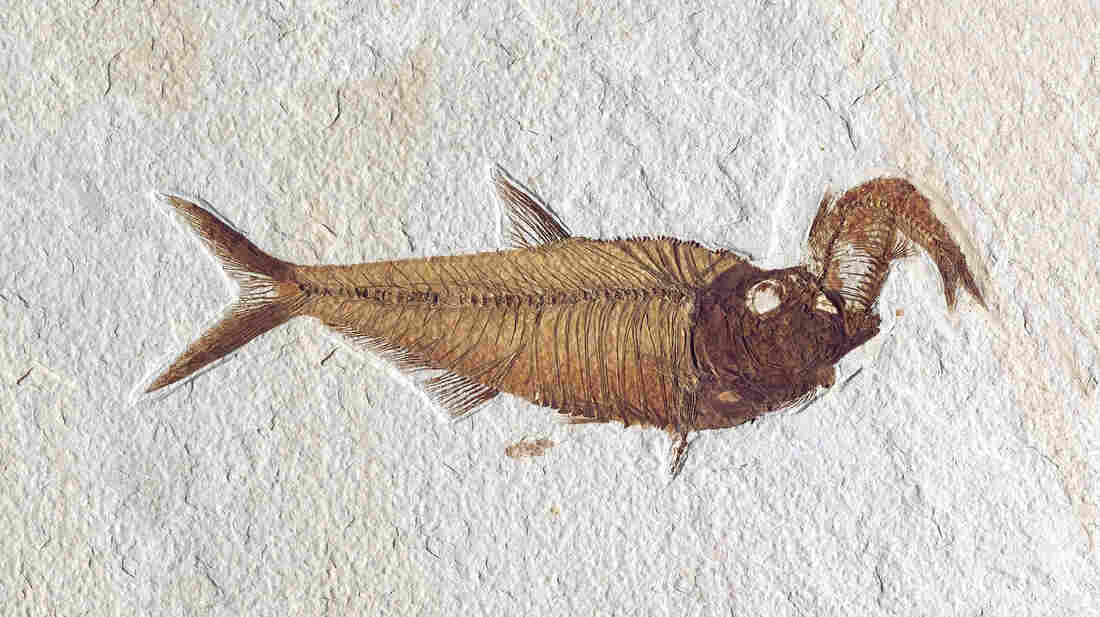 ... when along comes a mudslide, and boom! You and your lunch are frozen in place, harden into rock and then, a hundred or so million years later, there you are again, still gulping, but now under lights in a museum display case for an endless stream of strangers? Not good if you're a shy fish.

That's why I wouldn't want to be this pair of rear-to-rear copulating gnats in amber. (All the gnats zipping by in the museum are going to look away, or stare shyly at their six feet till you're done, and the thing is, you're never going to be done ...) 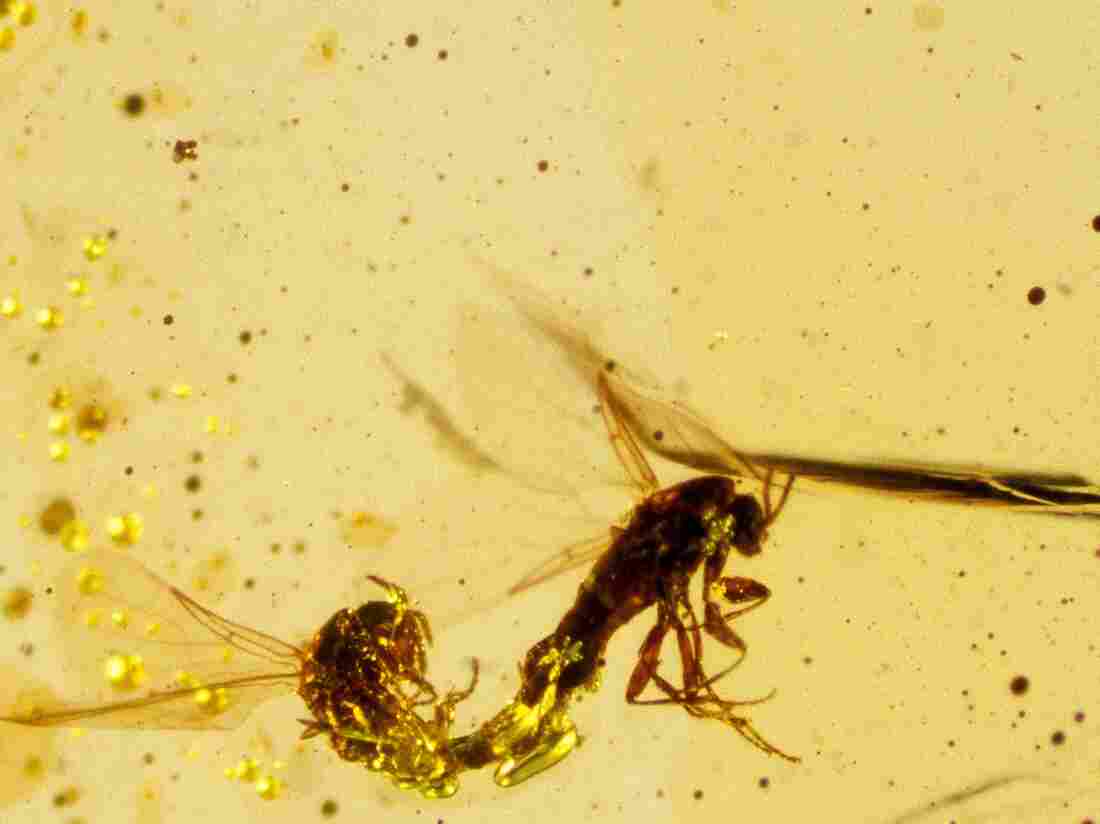 Or how about these turtles, the one on the left receiving connubial gifts (My editor Maria likes me to use polite language) from the smaller male on the right, who was probably an ordinary run-of-the-pond turtle and never thought anybody would see this ...

... or you're a pterosaur, a flying dinosaur, soaring low over an ancient pond thinking you might find yourself a little fish to snack on, so you poke your head into the water for a quick look-see, and what happens? One of those dumb armored Aspidorhynchus fish suddenly grabs onto your left wing with his pointy jaws, and pulls you down, and oh, my God, you're struggling for air, and, for heaven's sake, you are bigger than it is, and just when you're thinking "how embarrassing" ... kaboom! There's a mudslide or something, the lights go out, and you are forever being drowned. 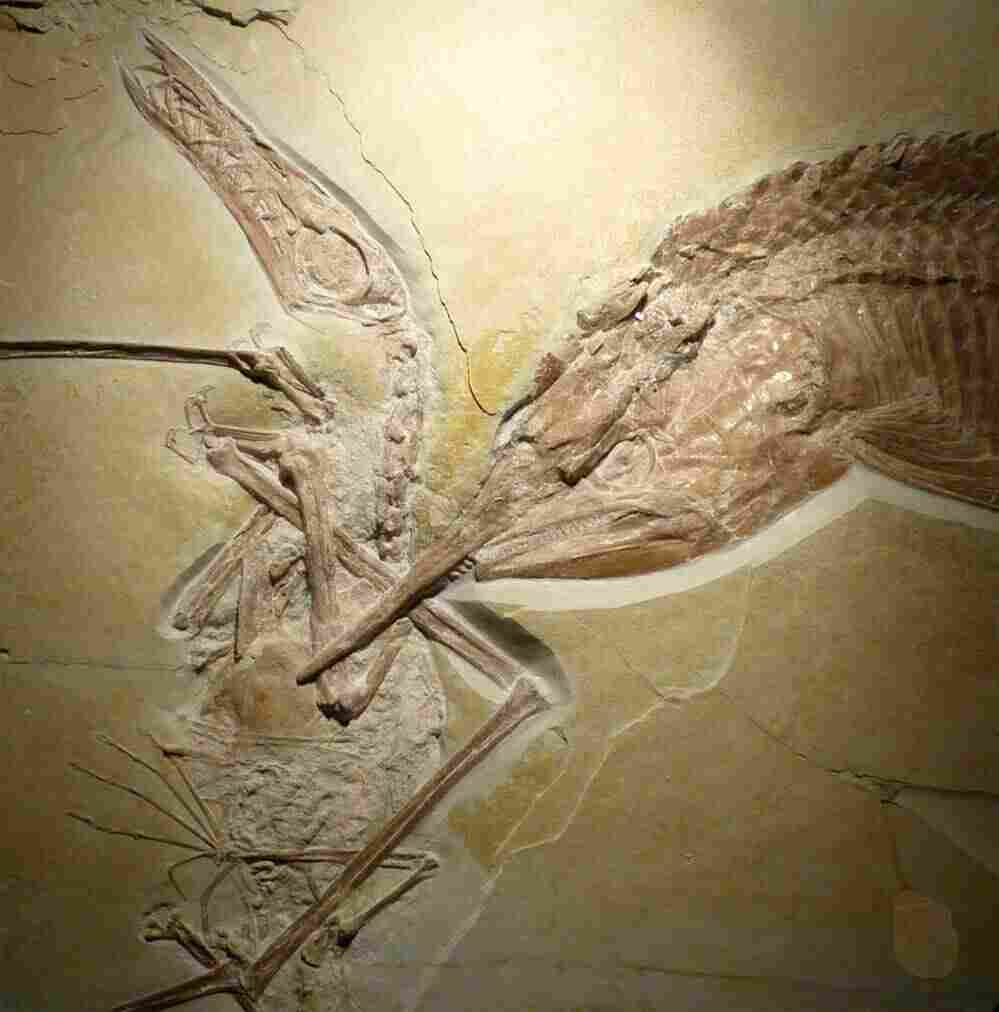 This is why the next time I have to wear those embarrassing socks my cousin gave me, I'm going to stay clear of mud-soaked mountain slopes and active volcanoes. You should do the same.