Accessibility links
Are Butterflies Two Different Animals in One? The Death And Resurrection Theory : Krulwich Wonders... Moths and butterflies radically change shape as they grow, from little wormy caterpillar critters to airborne beauties. Why are they born this way? Could they actually be separate organisms?

Updated Aug. 2, 2012: We have added an update to this post, which you can find below the original. Click here to read it.

Here's a dangerous, crazy thought from an otherwise sober (and very eminent) biologist, Bernd Heinrich. He's thinking about moths and butterflies, and how they radically change shape as they grow, from little wormy, caterpillar critters to airborne beauties. Why, he wondered, do these flying animals begin their lives as wingless, crawling worms? Baby ducks have wings. Baby bats have wings. Why not baby butterflies?

His answer — and I'm quoting him here — knocked me silly. 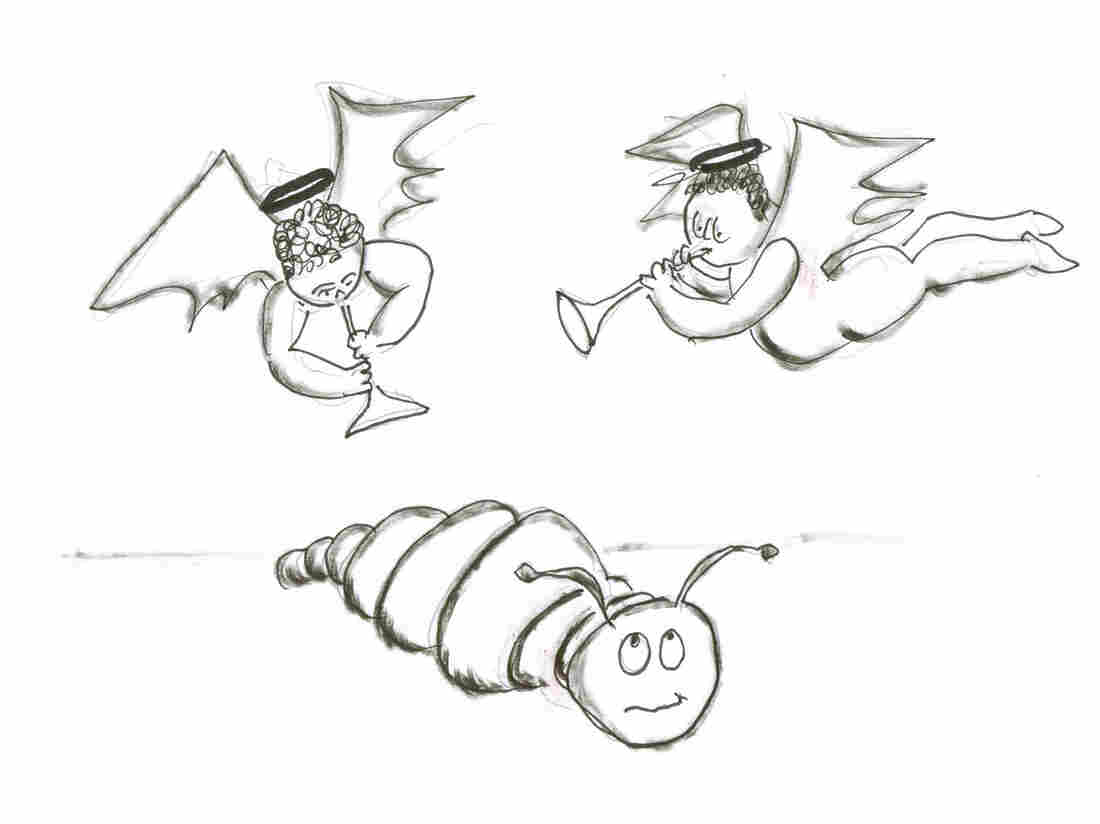 So he says it again: "[T]he adult forms of these insects are actually new organisms."

"In effect, the animal is a chimera, an amalgam of two, where the first one lives and dies ... and then the other emerges."

What he's saying is, while a moth appears to be one animal, with a wormy start and a flying finish, it's actually two animals — two in one! We start with a baby caterpillar that lives a full life and then dies, dissolves. There's a pause. Then a new animal, the moth, springs to life, from the same cells, reincarnated.

According to this theory, long, long ago, two very different animals, one destined to be wormy, the other destined to take wing, accidently mated, and somehow their genes learned to live side-by-side in their descendants. But their genes never really integrated. They are sharing a DNA molecule like two folks sharing a car, except half way through the trip, one driver dissolves and up pops his totally different successor. Driver No. 2 emerges from the body of driver No. 1.

When this theory was first proposed (not by Bernd, but by an English zoologist), eminent scientists scoffed.

Said Duke biologist Fred Nijhout, this idea fits better in "The National Enquirer than the National Academy (of Sciences)." Said paleontologist Conrad Labandiera, "You must be kidding!"

But Donald Williamson, a zoologist from the University of Liverpool in England, wasn't kidding. And if Bernd Heinrich is now warming to this notion, it's time to take a closer look at Death And Resurrection in insects.

The Death And Resurrection Cycle?

Many insects begin life as worm-shaped, leggy, tubular thingies that spend lots of time eating. We call them grubs or maggots or caterpillars, and they are programmed by a set of genes that sit in their DNA, spelled out in chemical letters, A, C, T and G. 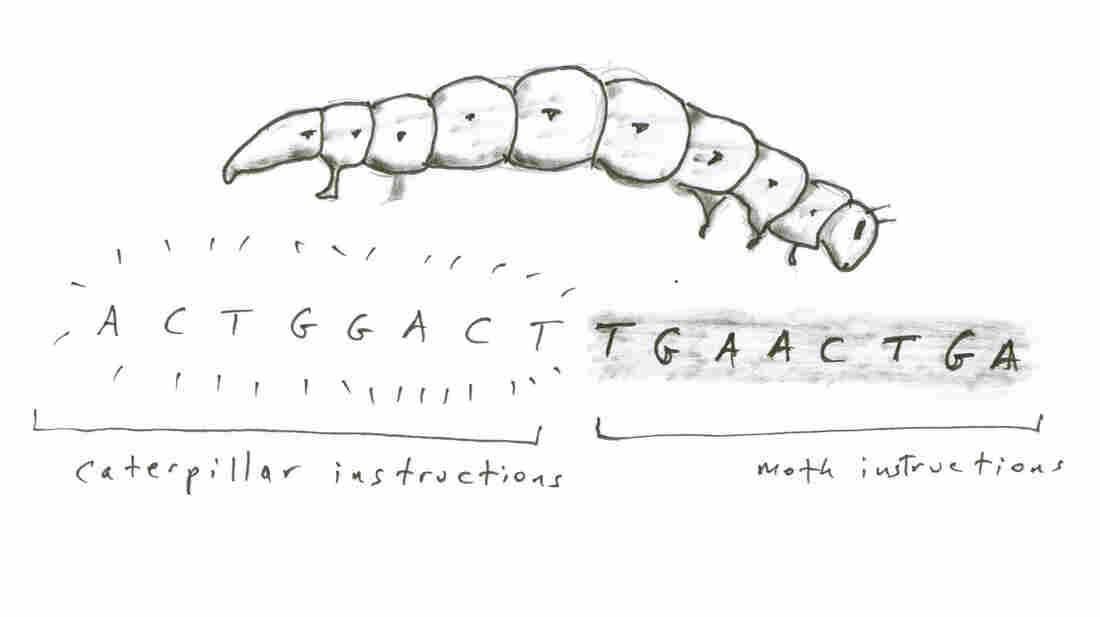 Notice I've put my "caterpillar" instruction genes on the left side of the DNA. The instructions on the right side are, temporarily, silent.

So the caterpillar grows and grows until one day, it spins itself a silk coverlet (a cocoon) or a harder pupa or chrysalis container that dangles off a twig and it goes ... well, silent. 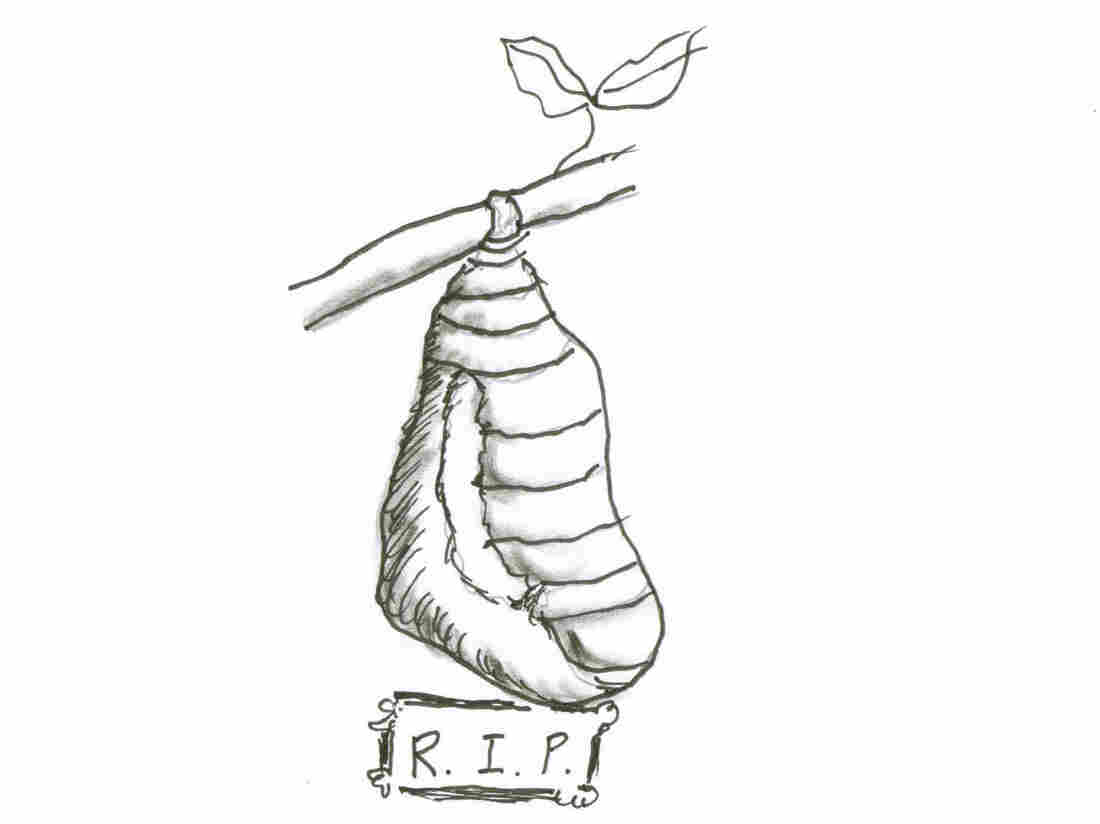 This phase is, as Heinrich puts it, "a deathlike intermission." Inside, these caterpillars shrink, shed their skin, their organs dissolve. Their insides turn to mush. Most of their cells die. But lurking in the goo are a few cells (the so-called adult or "imaginal" cells) that at this moment jump into action, reorganize all the free-floating proteins and other nutrients and turn what was once caterpillar into ... here comes the resurrection ... a moth! 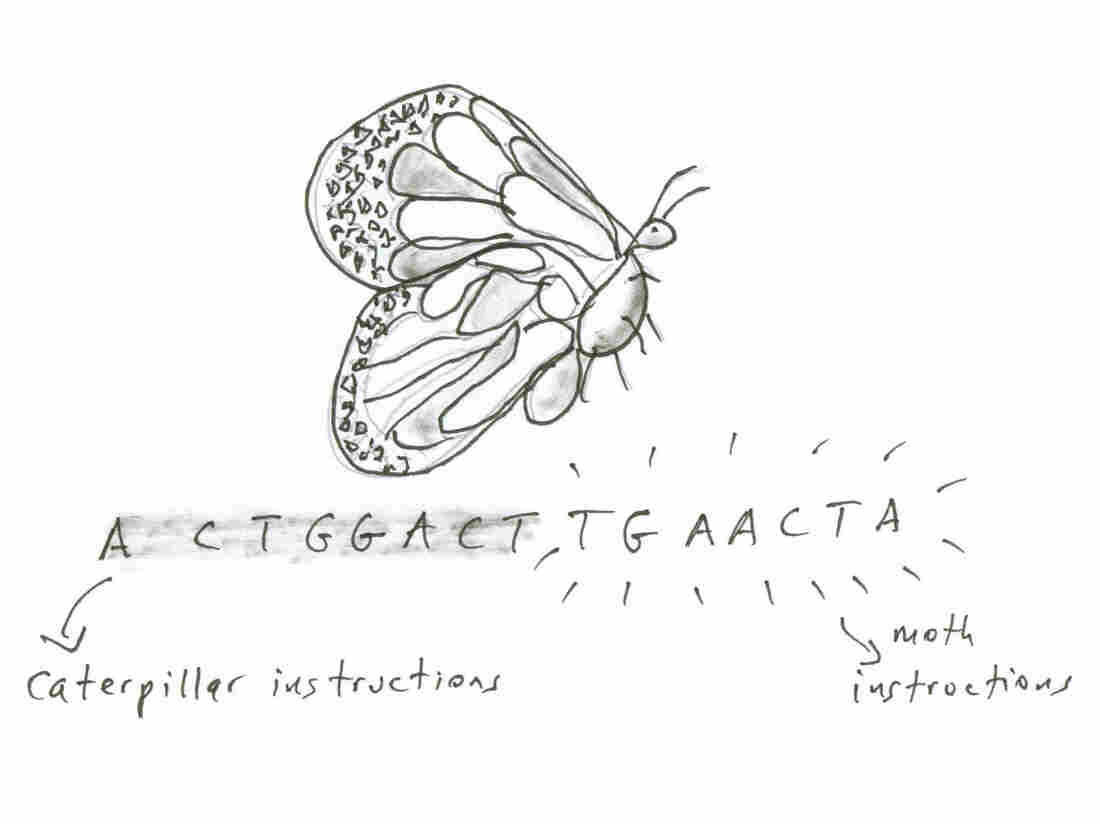 What's happened, says Heinrich, is that the caterpillar section of the DNA has been turned off, and the butterfly instructions have been turned on.

"[T]here are indeed two very different sets of genetic instructions at work," he writes, and this switch, turning "caterpillar" off, turning "butterfly" on, means that "most of one body dies and the new life is resurrected in a new body."

There is no controversy about the mechanics I just described; it's the explanation that's new and controversial. The old view was that over millions of years, animals evolved this habit of switching from one set of instructions to the other. The new view is that this is not one animal gradually changing shape, but rather instructions for two different animals sandwiched together and this change is so radical, says Bernd, "with no continuity from one to the next, that the adult forms of these insets are actually new organisms."

A caterpillar is born and dies; a butterfly is resurrected from its juices.

It's a stunning idea. (But with all kinds of problems: How to explain two very different creatures from different ancient species "mating"? Usually, they can't do that. How do you get DNA to not mix, so that the two creatures stay distinct? How do you define "death"?)

But still, I can't stop thinking about this. If cross-species matings were once possible, who knows what you could die and turn into? Could dandelions dream of becoming spruce trees? Could tadpoles, instead of morphing into frogs, become catfish? This is silly, I know, but radical metamorphoses, from tadpoles to frogs, maggots to flies, grubs to beetles, remain largely mysterious, so new explanations are intriguing, even if they startle. (Especially if they startle.)

On The Other Hand...

I have a post-script to this blog. Yes, Bernd Heinrich is intrigued by Donald Williamson's Death and Resurrection thesis, and yes the strangeness of this theory makes it fun to write about. But there is, of course, an alternate possibility: that this idea is just plain wrong. I mentioned that Donald Williamson's paper was very controversial when it was first published. It still is. A few hours after this post went up, I was sent a critique of Williamson's work written by two scientists, Michael Hart and Richard Grosberg.

They think there is no credible evidence for this idea of ancient mating between different species, and that, to summarize their view, they think Williamson's theory is scientifically indefensible. So far, however, Williamson's original paper has not been retracted, which is what happens when an idea is so off, or so insupportable that it is no longer scientifically plausible. (However another subsequent Williamson paper — describing another possible ancient mating — has been retracted from a different journal.)

So, what we have here is one of my favorite scientists embracing an idea that a great many other scientists find noxious and wrong. "You must be kidding!" is still the cry from many men and women who do cell and developmental biology for a living. Eventually, somebody's face will be red. Maybe Bernd's. Maybe the other guys'. That's how science works. But I think you should know that wondering about butterflies and moths can get feisty.

Bernd Heinrich discusses death and resurrection in his new book, Life Everlasting, the Animal Way of Death. His descriptions are often very gripping. Several earlier posts, an essay on chalk, another on vultures, came from this book.

Read an excerpt of Life Everlasting