Accessibility links
The Worst Way To Stay Alive Forever : Krulwich Wonders... If machines could one day duplicate a human brain, connections alone won't be enough. A brain has (and a machine needs) something else.

Some say it will happen soon.

Critics say it will take a long, long, time.

Many neuroscientists and philosophers think it ain't gonna happen, ever.

We're talking about building a machine that functions as the equivalent, or maybe as superior to, a human mind. 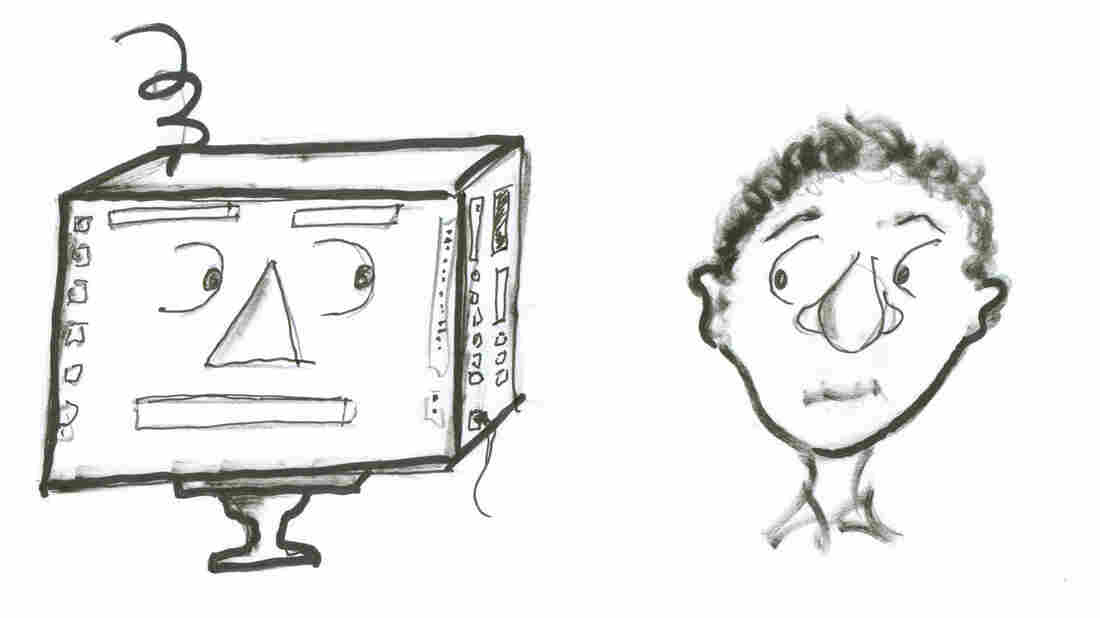 A synthetic brain doesn't have to be the exact equivalent of a human brain, but there are humans, the brilliant inventor Ray Kurzweil in particular, who hope one day to dump their minds into such a machine, boot up and go on living, disembodied, but mentally intact, forever.

Maybe a machine with an enormous number of connections can simulate some of what human brains do, but the most remarkable thing we do seems hard to build — or rather, hard to build using computer logic. And that is: to feel joy, to feel pain, to feel the feeling of feeling ... here's the argument in a single paragraph from a lecture delivered back in 1949, by neurosurgeon Sir Geoffrey Jefferson:

Not until a machine can write a sonnet or compose a concerto because of thoughts and emotions felt, and not by the chance fall of symbols, could we agree that machine equals brain — that is, not only write it, but know that it had written it. [No machine can feel] pleasure at its successes, grief when its valves fuse, be warmed by flattery, be made miserable by its mistakes, be charmed by sex, be angry or miserable when it cannot get what it wants."

Can we teach a brain in a machine to do that? We don't know how it works in our own brains, so artificial intelligence enthusiasts say, let's just build a computer that has neuron-equivalents that rival in number and complexity the neurons in our brain, turn it on, and see what it can do. (That oversimplifying, I know, but in a brute way, that's what they're saying.)

Why don't I think that's going to work? These brains may be able to calculate, reason, even explore, but, as Jefferson asked, "will they know they had done it?"

In his new book Why Does The World Exist, science writer Jim Holt talks to a number of philosophers about what's real, what's knowable, and in a chapter about computers, he describes how a computer-like machine might experience pain. 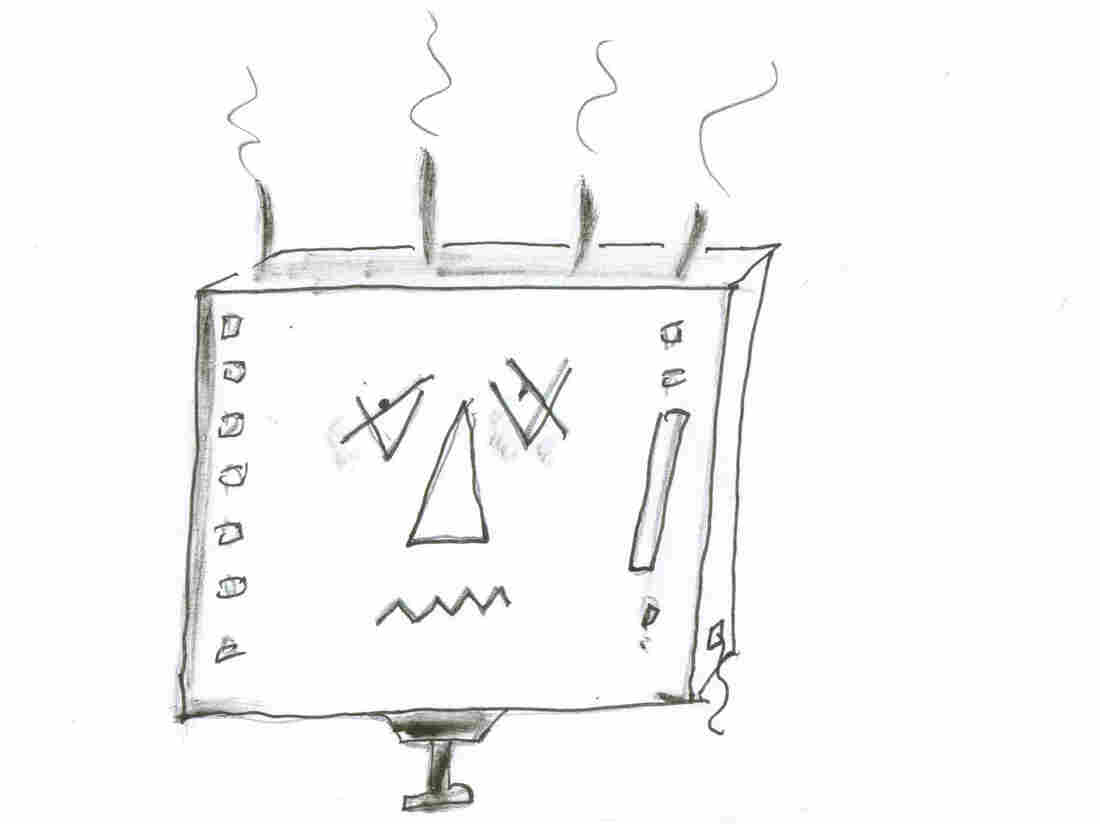 A computer, he says, creates a world using logic. The logic, he says, looks like an if/then flow-chart. If this happens, then that can happen. There are inputs and outputs. One leads to the other. So to experience what you and I would call pain (I'm not sure about you, actually, so I'll just stick to me), here's what Jim says my Pain Flow Chart would look like:

Second, that would cause "withdrawal behavior."

That's a computer's "experience" of pain. (Maybe there'd be a lot of subchapters, but at its heart it would be One Thing Leading To Another.) What Jim Holt wants to know, is:

"Would this simulation duplicate what seems most real to us about pain: the horrible way it feels?"

Can we get from an information sequence to our (subjective) experience of pain?

Holt then quotes philosopher John Searle who says to think a flow chart is the same thing as being in pain is "frankly quite crazy." "Why on earth," Searle asks, "would anyone in his right mind suppose a computer simulation of mental processes actually had mental processes?" 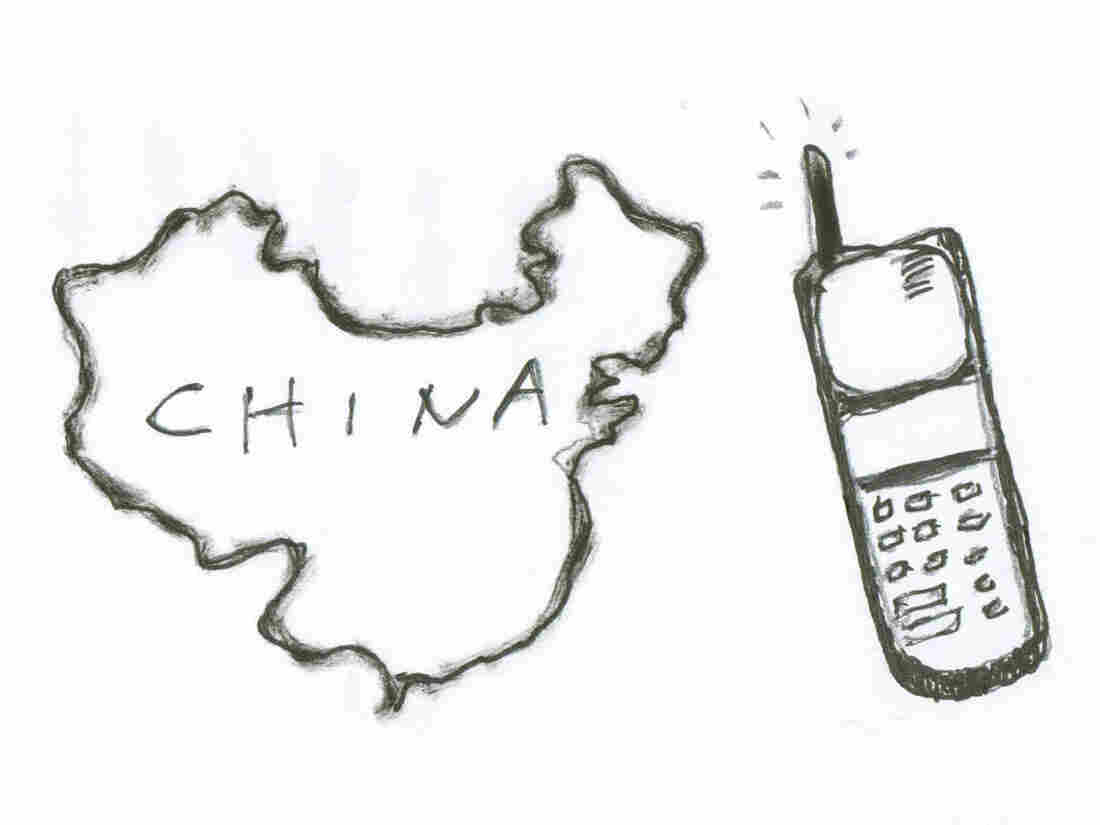 Holt then cites another thought experiment, this one from philosopher Ned Block.

What would happen, Block asks, if the everybody in China were asked to be a neuron, and the whole country decided to simulate a brain? Brain cells send messages to each other, so in this experiment, everyone in China would have a telephone, and when they got a call, they'd relay the message to someone else. That's more than a billion calls (or cells) transmitting. (That's around a hundredth of the number of cells in a human brain, but this is just a thought experiment.)

Now the question: "Would the nation of China, if it were to mimic the brain's software in this way, then have conscious states over and above those of its individuals?" Or to put it more simply:

"Could it experience, say, the taste of peppermint?"

Woah! I didn't see that coming! Even if everybody calling everybody else was chewing on a peppermint drop, still, would an independent sensation of pepperminty-ness emerge from the crowd, the way a new thought emerges from brain cells?

The lesson here (I guess) is that there is more to consciousness than the mere processing of information.

Something Else is Necessary

So if a machine is going to duplicate a human brain, connections alone won't do it. A brain has (and a machine needs) something else.

What that something else is, nobody knows. Sir Roger Penrose, who's thought long and hard about this, imagines it needs to be some kind of deep, widely distributed "quantum consciousness" that pervades everything. Daniel Dennett says there's no such thing.

I don't know enough to choose. All I'd say is, if someone's going to dump my brain into a computer and once inside, my mind can count, see, talk, learn, remember and dream, but not know there's a "me" in there doing all that, I'd rather be dead.

I want to know I'm here. That's what Being is about.

Jim Holt's new book Why Does The World Exist? is not about computer technology, it's about what why there is anything at all. Why are there atoms? Matter? How come there's not...nothing? A question that big sends him in many directions, and I just carved out a little piece here.