Accessibility links
Who Wants To Eat Jellyfish Omelets? Dolphin Meatballs? Mouse-On-Toast? These Guys : Krulwich Wonders... Foodwise, we live in choosy times, mostly choosing "no thank you." That's why you should know about two men who went wildly, dramatically, the other way. They tried to eat everything, no matter how improbable — things like lark's tongue pie and the heart of one famous king.

Foodwise, we live in choosy times, mostly choosing "no thank you."

More and more of us choose not to eat meat or fish or eggs or fatty foods. We don't want anything too sugary, too fried, too raw, too strange. We tiptoe through the grocery as if it's a danger zone, hoping not to be tempted by a glazed doughnut.

That's the fashion, and I suppose it's a healthy one. Which is why you should know about two men who went wildly, dramatically, the other way. They tried to eat everything, no matter how improbable, how nasty ... well, almost everything. One lived in Rome, the other in Britain. Let's start with the Roman. 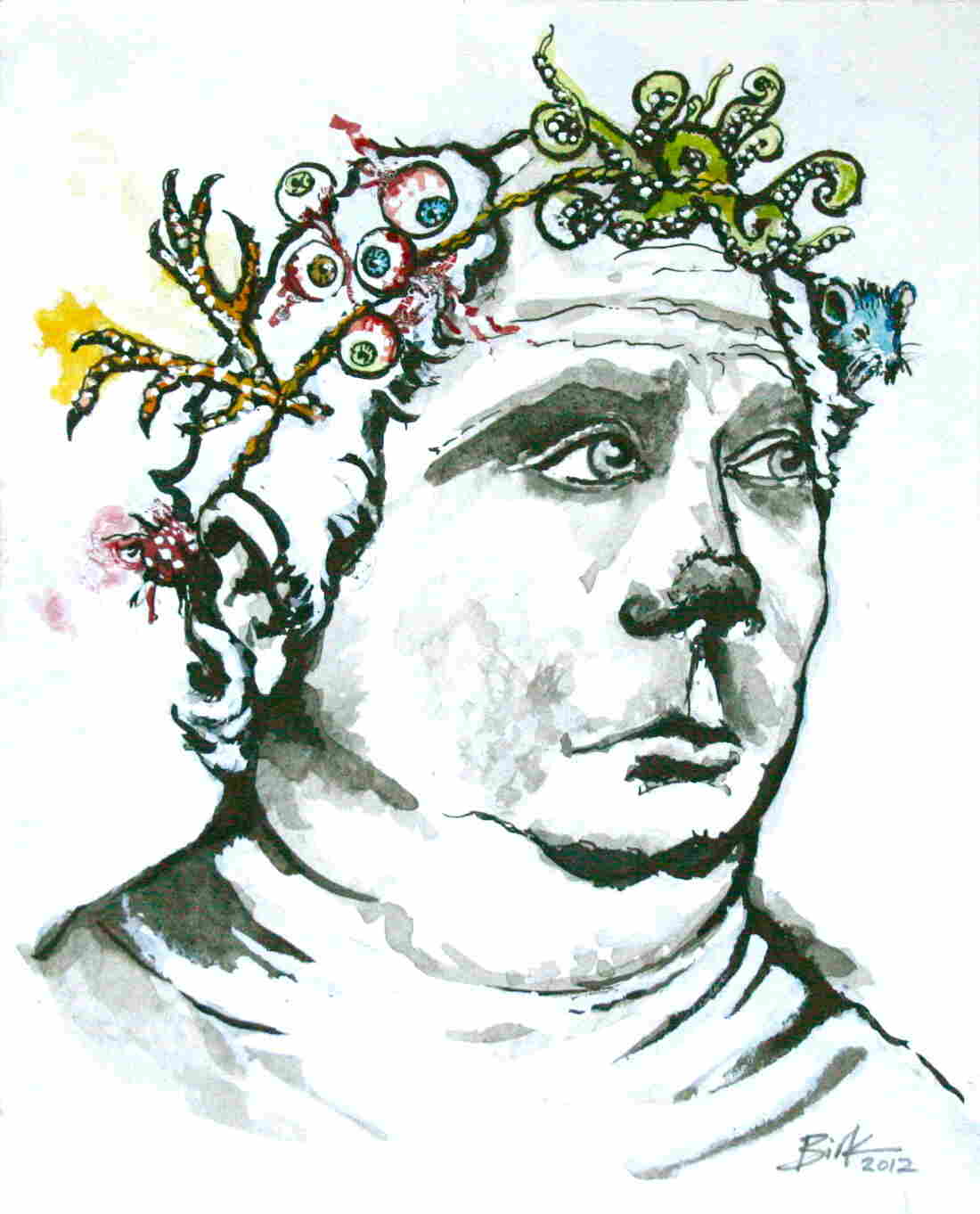 Marcus Gavius Apicius had a big house, a big kitchen and a sense of culinary adventure like no one else in first century Rome. He ate dangerously, creating meals so exotic, so daring, years later his recipes (or imagined versions of them) were collected in a cookbook named after him. I found some of his dishes in Patrick Faas' 2005 Around the Roman Table. What did Apicius like? 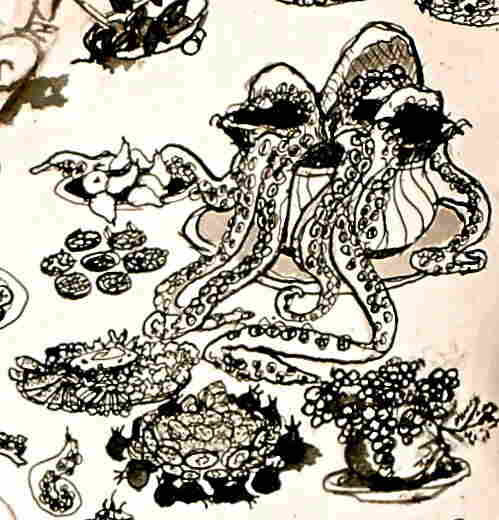 If he'd never tasted it, he wanted to. If no one else could afford it, he could. He was very rich and his options were boundless.

The Most Outrageous Ancient Dish

He is said to have created (though no one can prove this) the single most outrageous dish of ancient times, hugely popular in the first century, especially in Rome, probably for its insane expensiveness. I'm talking about Lark Tongue Pie.

A lark, you may know, is a small brown and white bird that rises early and sings just as the sun comes up. It weighs about 2 ounces and has, I presume, a very small tongue, so it's daunting to imagine how one would find enough tongues to make into a meat pie. When I Googled for a recipe, I found this response in a discussion group:

...if you show up at my door with a bucket of lark's tongues I'd probably improvise something. (Actually, I'd probably call the police.) 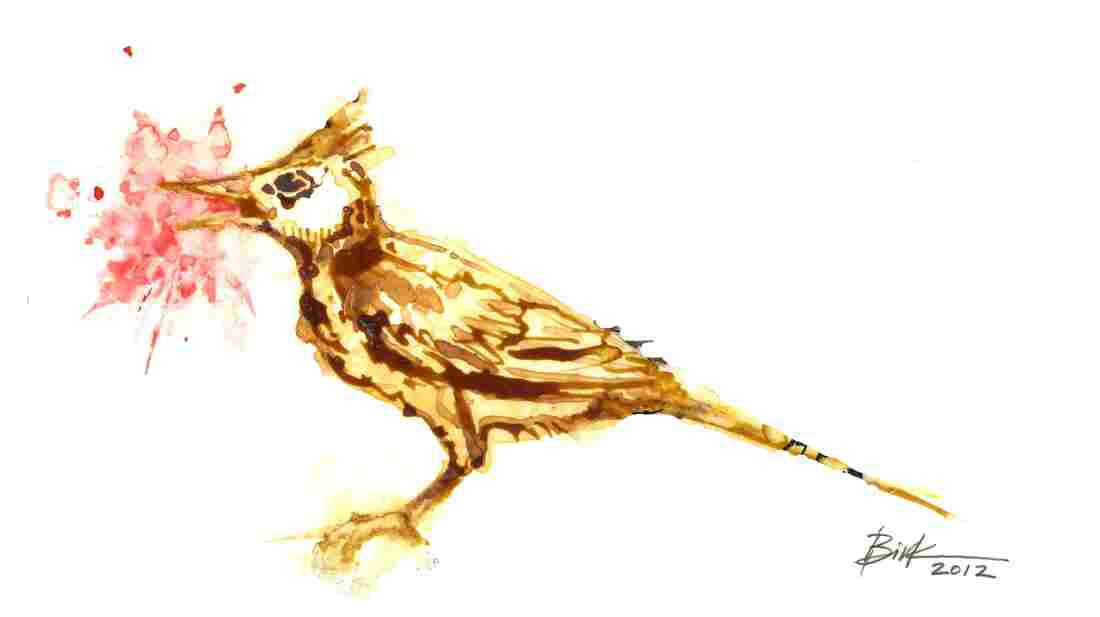 But not Apicius. He wanted the attention these over-the-top meals could bring. He was such a generous host that Roman statesman Seneca says Apicius burned through his 100 million sestertii fortune until he was down to a mere 10 million. When he realized he would one day have to retrench and eat modestly, he threw one last banquet and then poisoned himself.

That's the danger of any addiction. It can make you mad. But not if you're a little bit wacky in the first place. Which brings me to my other, and in this case I'd have to call him my All Time Champion Eater, a man who lived to be 80-something and systematically tasted everything he could possible swallow, tongue or chew. I am talking about an Englishman named William Buckland. 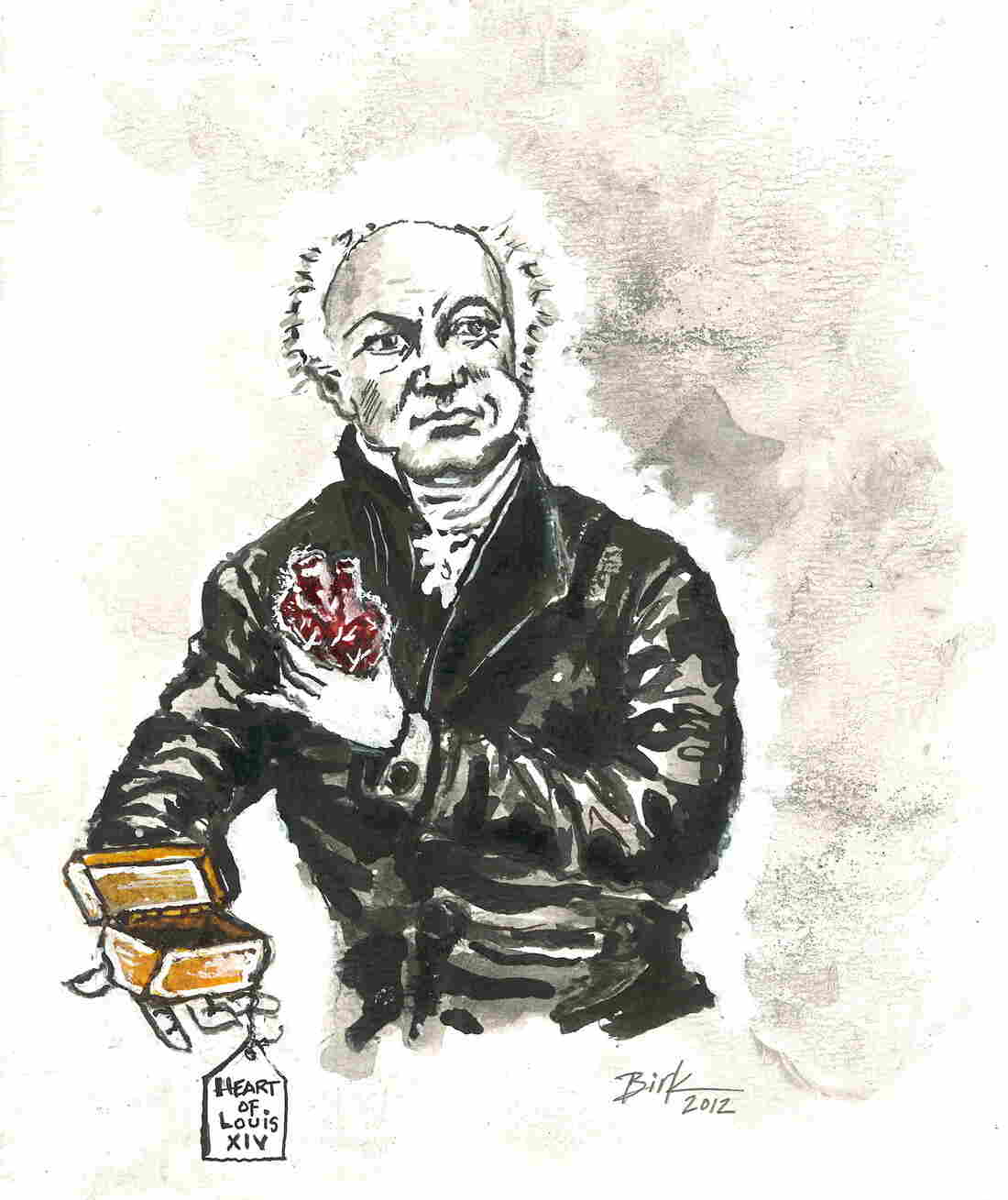 In the early 1800s, Buckland was a biblical geologist, the first trained geologist ever at Oxford. He also was a great admirer of animals. He had an odd assortment of live ones at his home, (a hyena, a monkey, allowed to wander the halls). He also had a collection of stuffed ones. Sometimes he would bring samples to class. By one account, while teaching at Oxford, he dropped a large hyena skull onto the lap of a (terrified) student and asked, "What rules the world?" When the student didn't answer, he cried, "The stomach, sir!" It's the stomach that "rules the world. The great ones eat the less, the less the lesser still ..." And therefore, he taught, whoever dominates the world of plants and animals can (and should) eat all the others.

What rules the world? The stomach, sir!

And to demonstrate, that's what he did. He ate nearly everything. He made it a lifelong project, systematically working his way through all the animals in Noah's ark, snacking on each of them.

A couple of times, he balked. One mole repulsed him. He gagged on a bluebottle fly. But with a little butter, most things went down. Says author (and Radiolab regular) Sam Kean, Buckland ate (and offered his guests): "Crisp mice in golden batter. Panther chops. Rhino pie. Trunk of elephant. Crocodile for breakfast. Sliced porpoise head. Horse's tongue. Kangaroo ham." He also sipped dangerously.

One time he was visiting a cathedral and was shown a miracle: Apparently a beam in the roof was dripping fresh saints' blood to the floor. That, anyway, was the local legend. Buckland, "never one to turn down the opportunity to try a new flavour," says journalist Fraser Lewry, "licked the flagstones and was able to disprove the myth, immediately identifying the mystery liquid as bat urine."

How To Explain Dr. Buckland

Eww. Why did he do it? Sam Kean says Buckland spent a lot of time in the woods or away in the mountains digging and had such "limited dining options" that maybe he learned to eat pretty much anything. Or "[i]t may have been a harebrained scheme to get inside the minds of the extinct animals whose bones he dug up."

That's why he's my champ. He wasn't as rich as Apicius. He wasn't as inventive. But he had a joy in him, more than a hunger; he had a mission to taste, to explore, to dare. 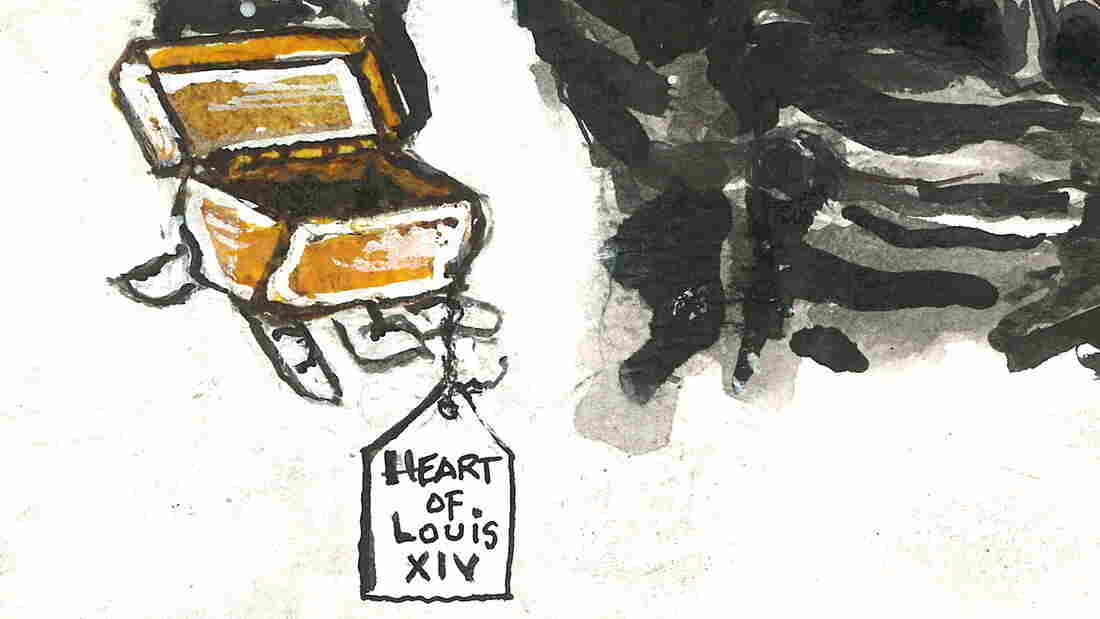 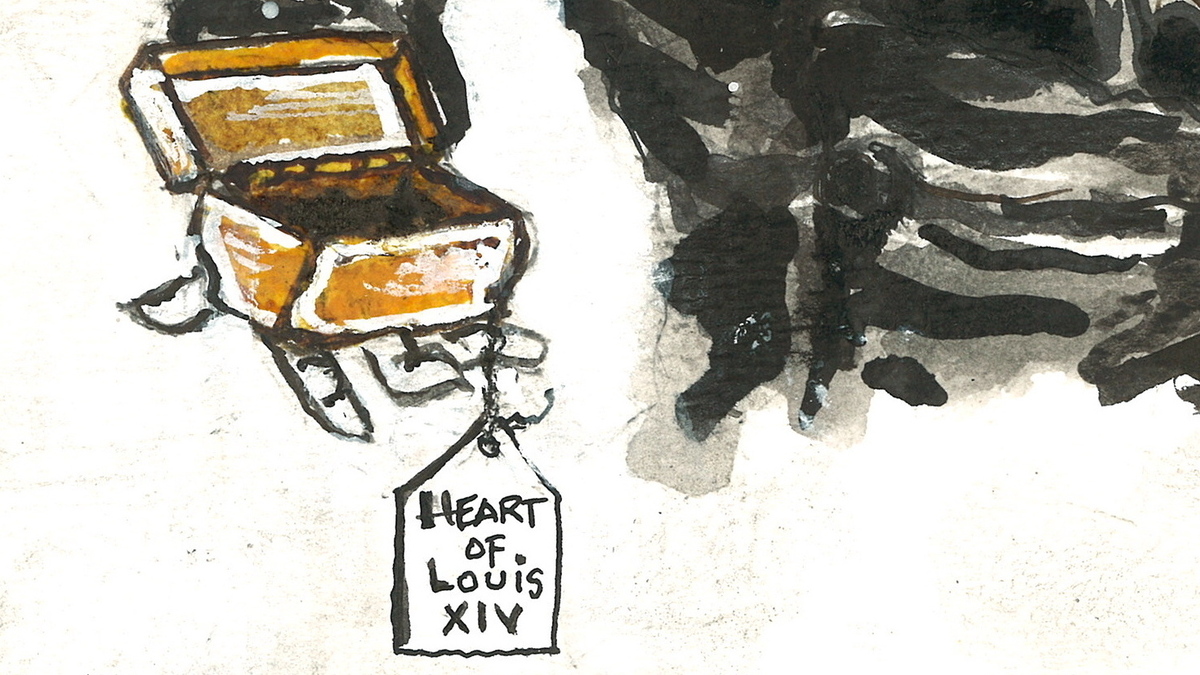 His craziest moment may be apocryphal, but it was a story his friends told at the time. One day, he was visiting a friend who wanted to show off a special family treasure. It was sitting in a silver snuffbox. Buckland looked in, and there, cushioned in the box, was a desiccated morsel of King Louis XIV's heart. That's the Louis who built Versailles. Louis the Sun King.

"I have eaten many strange things," Buckland said to his friend, "but have never eaten the heart of a king." With that, before anybody could stop him, he popped the piece in his mouth and swallowed.

And that's why William Buckland wears my crown: Most Daring Eater Ever. 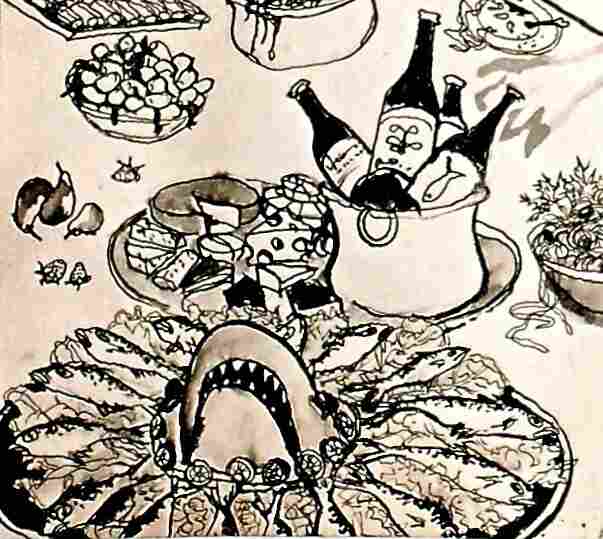 In his new book, The Violinist's Thumb, Sam Kean tells the story of how changes in our DNA — human DNA — allowed us to swallow what for other animals is an impossibly rich diet. This is the story of the "meat eating gene," starring, who else? Dr. William Buckland. Aaron Birk, our illustrator on this post, is the author of a graphic novel, The Pollinator's Corridor.

I didn't know this, but now I do. There are places you can go today that are chock full of adventurous eaters, maybe as adventurous as Dr. Buckland and Apicius. The place to go is not Europe, but Southern China.

The Southern Chinese have a tradition of eating all kinds of things we would never put on a plate. Their food markets are famously ... um ... unlike ours, being full of live snakes, turtles, ferrets, cats, dogs, and you don't want to know what else.

Then, about ten years ago, things got wilder. In his about-to-be-released book about virus hunting and epidemics, David Quammen describes a food craze called "Wild Flavor" that swept through thousands of restaurants in Guangzhou and Shenzhen. Wild Flavor menus are daring in the extreme, offering exotics like ferret badger, beaver, hog badger, and masked palm civet (a kind of cat). This raises, of course, conservation questions, health risks, digestion problems. There's even reason to think the SARS epidemic started at one of South China's vast live food markets, so I'd imagine that David, one of our leading writers about biological diversity, would avoid eating weird, possibly dangerous food. But something in the South China air makes otherwise sober people grab their spoons and dig in. Here's David's description of a snack he had: He calls it "the world's stinkiest fruit."

It's a large spiky thing, [called a] durian, like a puffer fish that has swallowed a football; pried open, it yields individual goblets of glutinous creamy pulp, maybe eight or ten goblets per fruit, and an unwelcoming bouquet. The pulp tastes like vanilla custard and smells like the underwear of someone you don't want to know. We ate barehanded, slurping the goo between our fingers as it oozed and dripped. This was before dinner, in lieu of peanuts and beer. Then we went out to a restaurant where [his American friend] ordered us a dish featuring congealed pig's blood — in little hepatic cubes, like diced liver — with beet sprouts and hot red peppers. By late evening my shirt was soaked with sweat.

David Quammen's new book is called Spillover. It's not a food book; it's a book about infections and pandemics. In his stories, when people sit down for a meal, nothing nice is going to happen. Mostly I'd just whisper, "Don't!"