Accessibility links
How Human Beings Almost Vanished From Earth In 70,000 B.C. : Krulwich Wonders... By some counts of human history, the number of humans on Earth may have skidded so sharply that we were down to just 1,000 reproductive adults. And a supervolcano might have been to blame. 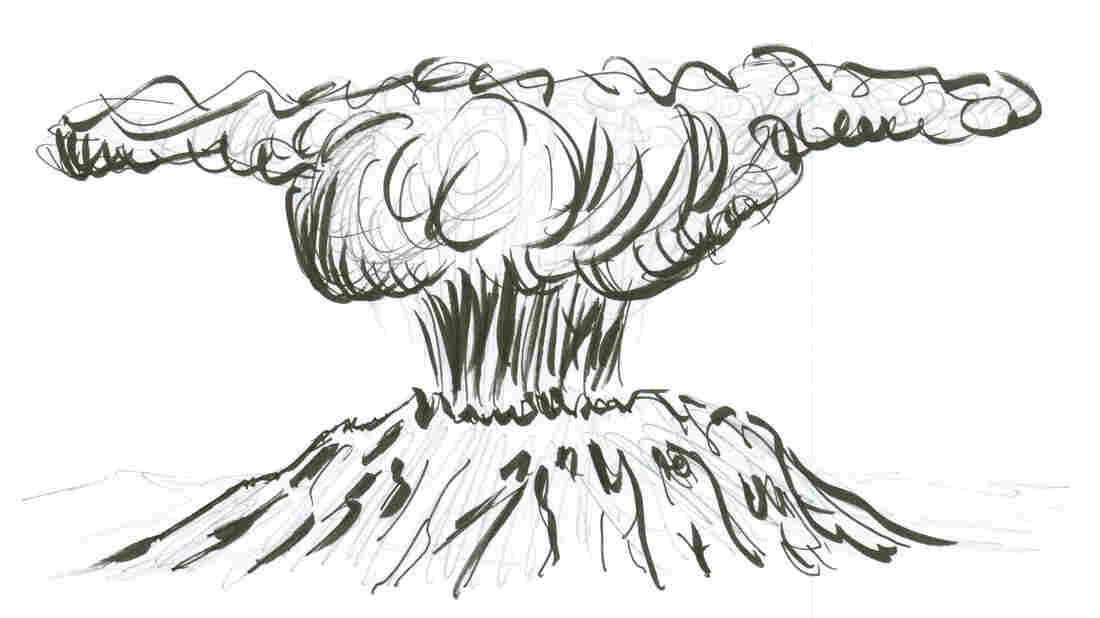 Add all of us up, all 7 billion human beings on earth, and clumped together we weigh roughly 750 billion pounds. That, says Harvard biologist E.O. Wilson, is more than 100 times the biomass of any large animal that's ever walked the Earth. And we're still multiplying. Most demographers say we will hit 9 billion before we peak, and what happens then?

Well, we've waxed. So we can wane. Let's just hope we wane gently. Because once in our history, the world-wide population of human beings skidded so sharply we were down to roughly a thousand reproductive adults. One study says we hit as low as 40.

Forty? Come on, that can't be right. Well, the technical term is 40 "breeding pairs" (children not included). More likely there was a drastic dip and then 5,000 to 10,000 bedraggled Homo sapiens struggled together in pitiful little clumps hunting and gathering for thousands of years until, in the late Stone Age, we humans began to recover. But for a time there, says science writer Sam Kean, "We damn near went extinct."

Once upon a time, says Sam, around 70,000 B.C., a volcano called Toba, on Sumatra, in Indonesia went off, blowing roughly 650 miles of vaporized rock into the air. It is the largest volcanic eruption we know of, dwarfing everything else... 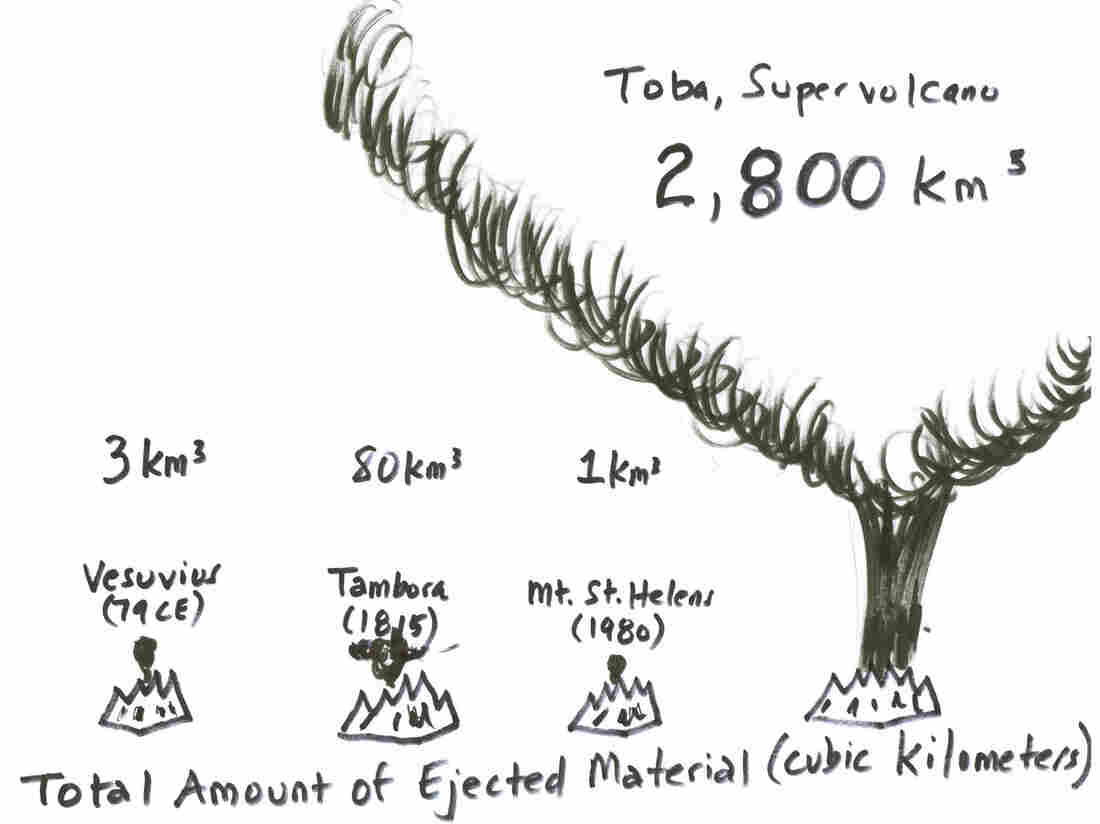 That eruption dropped roughly six centimeters of ash — the layer can still be seen on land — over all of South Asia, the Indian Ocean, the Arabian and South China Sea. According to the Volcanic Explosivity Index, the Toba eruption scored an "8", which translates to "mega-colossal" — that's two orders of magnitude greater than the largest volcanic eruption in historic times at Mount Tambora in Indonesia, which caused the 1816 "Year Without a Summer" in the northern hemisphere.

With so much ash, dust and vapor in the air, Sam Kean says it's a safe guess that Toba "dimmed the sun for six years, disrupted seasonal rains, choked off streams and scattered whole cubic miles of hot ash (imagine wading through a giant ashtray) across acres and acres of plants." Berries, fruits, trees, African game became scarce; early humans, living in East Africa just across the Indian Ocean from Mount Toba, probably starved, or at least, he says, "It's not hard to imagine the population plummeting."

Then — and this is more a conjectural, based on arguable evidence — an already cool Earth got colder. The world was having an ice age 70,000 years ago, and all that dust hanging in the atmosphere may have bounced warming sunshine back into space. Sam Kean writes "There's in fact evidence that the average temperature dropped 20-plus degrees in some spots," after which the great grassy plains of Africa may have shrunk way back, keeping the small bands of humans small and hungry for hundreds, if not thousands of more years.

So we almost vanished.

But now we're back.

It didn't happen right away. It took almost 200,000 years to reach our first billion (that was in 1804), but now we're on a fantastic growth spurt, to 3 billion by 1960, another billion almost every 13 years since then, till by October, 2011, we zipped past the 7 billion marker, says writer David Quammen, "like it was a "Welcome to Kansas" sign on the highway."

We're unique in the history of mammals. We're unique in this history of vertebrates. The fossil record shows that no other species of large-bodied beast — above the size of an ant, say or an Antarctic krill — has ever achieved anything like such abundance as the abundance of humans on Earth right now.

But our looming weight makes us vulnerable, vulnerable to viruses that were once isolated deep in forests and mountains, but are now bumping into humans, vulnerable to climate change, vulnerable to armies fighting over scarce resources. The lesson of Toba the Supervolcano is that there is nothing inevitable about our domination of the world. With a little bad luck, we can go too.

We once almost did.

Radiolab regular Sam Kean's new book on genetics, The Violinist's Thumb, tells the story of Toba, the supervolcano, to explore how human genes record a "bottleneck" or a drastic narrowing of genetic diversity 70,000 years ago. David Quammen's new book Spillover is about people pushing into forests, swamps and places where viruses have been hiding. Those viruses are now beginning to cross over into horses, pigs, bats, birds and, inevitably, they threaten to "spillover" into us. For a virus, or bacteria, 7 billion potential hosts look like a fantastic opportunity.