Accessibility links
Celebrating Autumn All Year Round ... By Becoming A Leaf : Krulwich Wonders... It's one thing to admire autumn leaves. It's another thing to become those leaves. Here we proudly present a collection of forest insects who spend their lives looking almost exactly like leaves about to drop from trees. And sometimes, they literally do it!

Celebrating Autumn All Year Round ... By Becoming A Leaf

Celebrating Autumn All Year Round ... By Becoming A Leaf 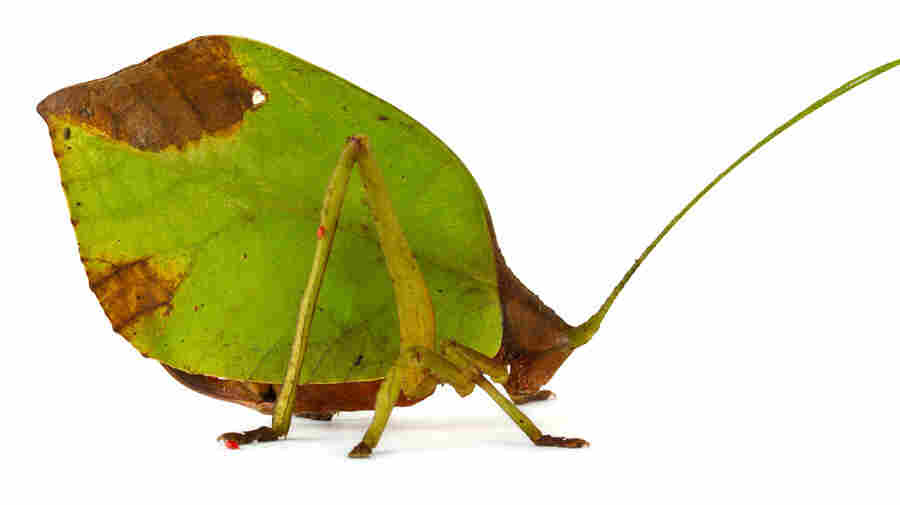 It is autumn, and where I live the leaves are peaking; there is a riot of them everywhere, narrow ones, broad ones, droopy ones, crunchy ones. Leaves come in so many shapes, hues, textures — the closer you look, the more differences you see. Botanists have names for every leaf type, and clumped together, says writer Robert Dunn, they sound like free verse poetry ...

But to us, they're just leaves, and this week they're just winding up their show, taking a last shot at the sunshine before they catch a breeze and waft away. This is their brief time to be admired.

Which we do. And then we go on to other things. That's why I'd like to introduce you to a better class of leaf admirer.

The creatures I'm talking about don't drive to a Vermont hotel for one weekend a year. No, they spend every day of their lives not just liking leaves, but pretending to be leaves, which I think is a much higher form of praise.

Check out these leaf mimic katydids. They're not content to just look like a plain green leaf. "That would be too easy," says entomologist and wildlife photographer Piotr Naskrecki. 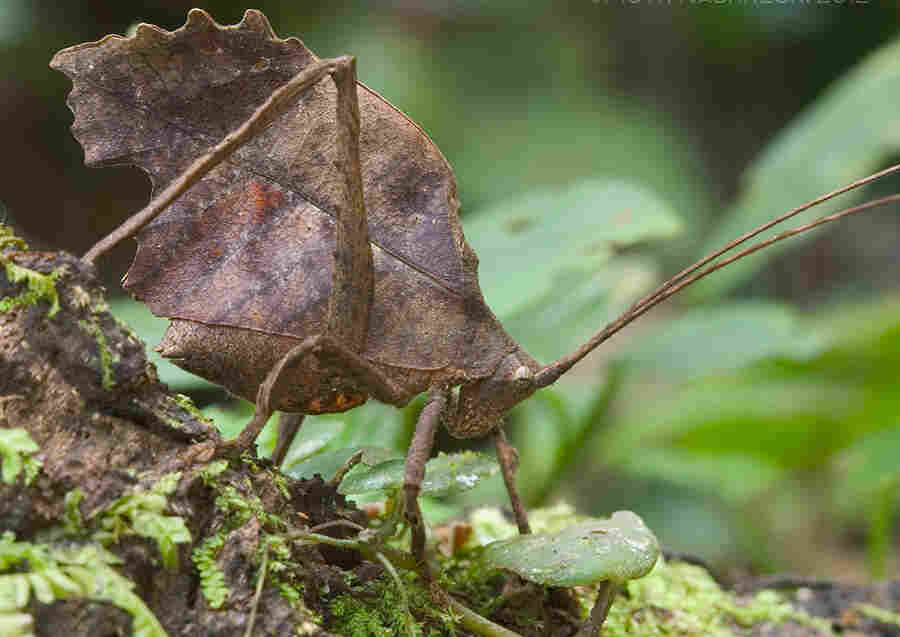 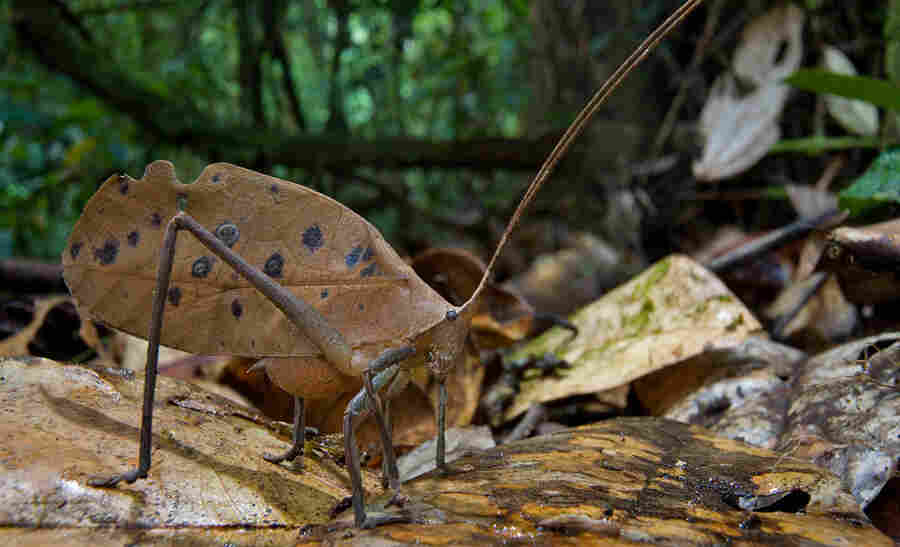 "No, their bodies are perfect replicas of leaves that have been chewed up, torn, rotten, dried up, partially decayed, or covered by fungi. Some even have fake holes in their wings (fake, because the holes are in fact thin, translucent parts of the wing membrane.)"

This next one, a Costa Rican Leaf katydid, goes a step further. It looks like a leaf that's been eaten, or has what's called a "necrotic" or diseased edge. A monkey looking around for a juicy katydid to munch on would have a hard time seeing this as anything but a leaf. 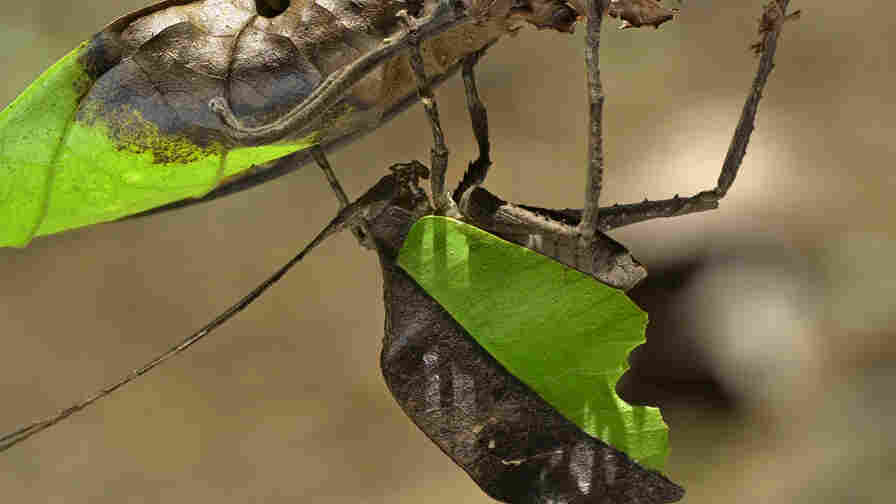 This isn't, by the way, a standard act of mime. You won't find thousands of katydids with the exact same bite-on-the-edge look. "No two individuals are alike," says Piotr Naskrecki. In fact, "you can find individuals whose appearance is so dramatically different that one would feel justified to place them in different species." But they're not. These are, you should excuse the expression, artists: individuals pretending, in their very different ways, to be a leaf.

The biological explanation is that the tamarind monkeys who want to eat them are excellent hunters. They comb through foliage, unfurl leaves, and look closely for insects hiding in plain sight. If katydids had 10 standard imitations, the monkeys would learn those types and spot them every time, but says Piotr, "when every individual in the katydid population looks slightly different, then the task of finding them is much more difficult."

And now comes my finish: This is the most beautiful deceit of all – and it's seasonally appropriate!

This here is a leaf katydid from Guyana. See if you can find it. 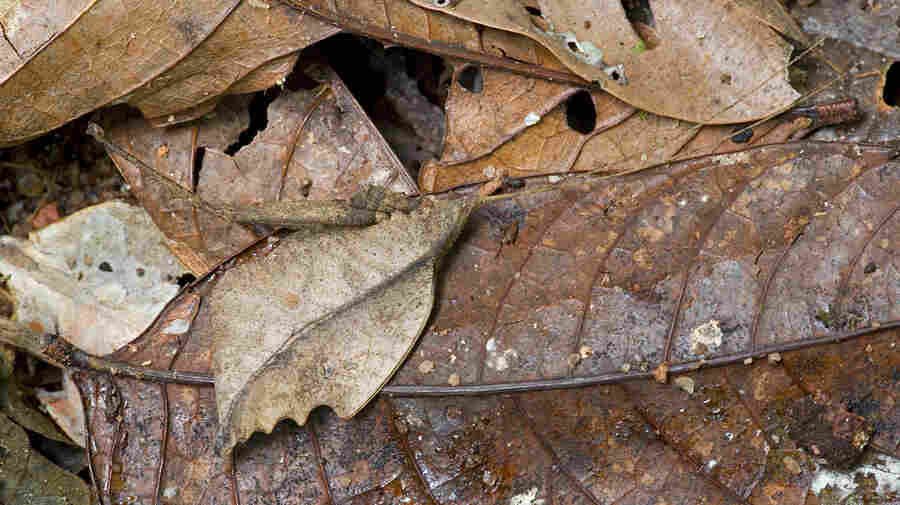 These insects don't have hidden colors under their wings that they can flash to frighten predators. They're just boringly brown. So when a predator approaches, they do what October leaves do where I live. They float gently to the ground and play dead.

Meryl Streep would be jealous.

You can learn about these katydids in more detail on Piotr Naskrecki's blog, called "The Smaller Majority". He takes the photos, he tells the stories, he knows the science. He also posts all the time, so if you are hungry for bug stories of every sort, check him out. He also has a new book, just published, called Relics.

But if your passion is leafy, not buggy, then may I suggest yet another great leaf appreciator. This one doesn't just gaze at leaves, or pretend to be one; instead, he scissors them into startlingly funny shapes, taking leaves to places they've never been before. His name is Christoph Niemann, and if you haven't seen his leaves, you haven't experienced the full possibilities of autumn.