Accessibility links
Will We 'Fix' The Weather? Yes. Should We Fix The Weather? Hmmm : Krulwich Wonders... In the long run, geoengineering — tinkering with air, oceans, the skies — will help us survive on a changing planet. More and more eminent scientists agree that if the human race survives, the engineers will get smarter, the tools will get better, and one day we will control the climate. But should we?

She teaches at Columbia University, up the block from where I live. She's a paleoclimatologist. Her focus is climate change, and in a book I am reading, she says someday soon we won't be climate victims, we will be climate choosers. We will engineer the climate we want.

"My feeling," she tells author (and NPR commentator) Craig Childs, "is that there is never going to be another ice age as long as there are humans on the planet." 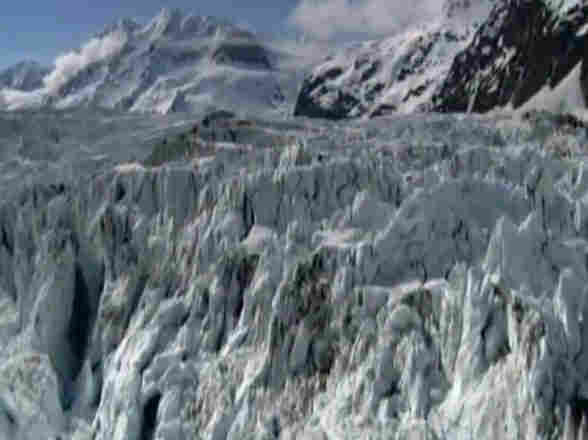 No more ice ages. The Earth will, of course, keep moving nearer and farther from the sun, our planet will keep wobbling on its axis, and there will be times when the Earth wants to be cold and icy and other times when it wants to be warm and green, but by the end of this century, she says, we will know how to keep glaciers where we like them, on mountain tops, at the poles, not down in the valleys, in the forests, where we live.

We won't need an Einstein or a Newton to do this. "To me it just seems like the inevitable outcome of the rise of higher beings [meaning humans with engineering degrees] that can control their destiny." And since next ice age isn't due for another thousand years or more, Raymo figures these same engineers will also take a shot at our global warming problem:

"Right now we are actively changing the climate in a very uncontrolled way, but I'm fairly certain that by the end of this century we'll have developed the technology to titrate the climate, to basically control the level of CO2 in the atmosphere. We'd have a thermostat."

Well, that's good news, no? After all, who wants their home washed away by a swollen ocean or mowed down by a glacier? Not me. Not you. So of course we should try to protect ourselves, and an engineered solution seems targeted, efficient, sensible. If we can pull it off. Why not? 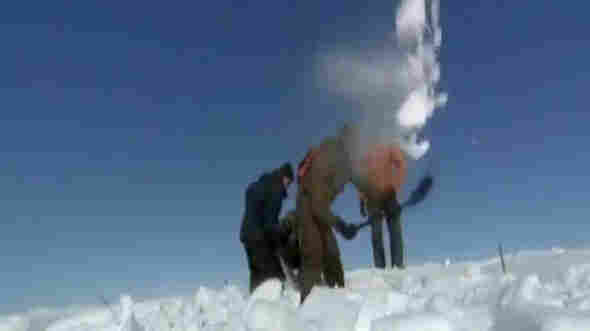 Well, here's something to think about. About five years ago, Jason Box, a glaciologist from Ohio State University flew 31 giant rolls of white plastic to a glacier in Greenland. That glacier was melting at an accelerating rate and he wondered if putting a plastic blanket on top would reduce the melt. 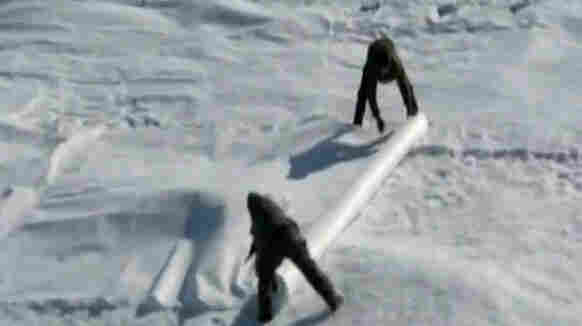 He and his team spread long rolls of white plastic across 10,000 feet of ice, then left for a while. His notion was that the white blanket would reflect back the rays of the sun, deflecting warmth, keeping the ice cool below. When he came back to check the results, here, in this video, you can see what he found...

It worked. Exposed ice had melted faster than covered ice. He had not only saved two feet of glacier in a short time, he'd shown it's possible to keep glaciers intact longer. Plus the fix was technological; no coal plants were shut down. Nobody was taxed, fired, or regulated. Ice was saved, no jobs lost. Just the sort of fix we're looking for.

"Thank you, but no thank you," says Konrad Steffen.

Konrad Steffen, one of the world's most prominent climate scientists, was not impressed. He told Craig that people think technology can save the planet, "but there are other things we need to deal with, like consumption. They burned $50,000 just for the helicopter" — the one that brought the plastic to the glacier. This experiment, said another scientist, Jose Rial, gives people false hope that climate change can be fixed without changing human behavior. It can't. A better solution, he says, is to "increase the efficiency of automobiles." Geoengineers shouldn't be the ones who clean up human messes, and there's no guarantee geoengineers won't make mistakes too. Technology won't give us a free ride.

But in the long run, geoengineering — tinkering with air, oceans, the skies — will help us survive on a changing planet. Maureen Raymo is hardly alone in her prediction. More and more eminent scientists agree with her, that if the human race survives, the engineers will get smarter, the tools will get better, and one day we will control the climate. But what then?

"Just the mention of us controlling the climate, not blindly poking at it as we are now, but manually steering it, sent a small shiver down my back," Craig writes. "What does it mean to manufacture a planet to our liking, assuming we earned the skill to do so? Something sounded wrong about stopping ice ages by our own will," he says.

Me? I'm with Craig on this. I like it better when the Earth takes care of itself, and I'm just a passenger. I like thinking that I'm cargo on a self-regulating blue ball that knows how it ticks, and takes care of its own. I guess one day we will have to run the place, but for the moment, sitting at my desk, looking out at the trees bending wildly, the wind howling, beautiful chaos everywhere, I'm happy not to be in charge. When you write the script, you aren't innocent any more. You know too much.

For a little while longer, I like knowing less.

Craig Childs' new book is called Apocalyptic Planet: Field Guide To The Everending Earth. In it, Craig goes to places that are melting, moving, submerging, freezing, falling apart, losing species, gaining more of us. It's quite a trip. For part of it, he brings his mom. She's amazing.