Accessibility links
The Big Apple's Mayor Makes A Very Scary Video : Krulwich Wonders... The mayor of New York City wants you to see what an hour's, a day's, a year's worth of NYC's carbon dioxide emissions would look like — if you could see them. The gas is normally invisible. So he's made a video, and it ain't pretty. Why would the mayor do this? What's it look like? See for yourself.

I didn't know what to make of this when I saw it. I live in Manhattan, in a city where people bike, take buses, subways, trains, live and work in towers where they share elevators, share water, share electricity. I thought my town is setting the example for energy-efficient, communal living. And then, the guy who runs the place, Mayor Michael Bloomberg, releases a study — including (see below) a shocking video — that says, you think New York is great on energy? You think that? Well, check this out... 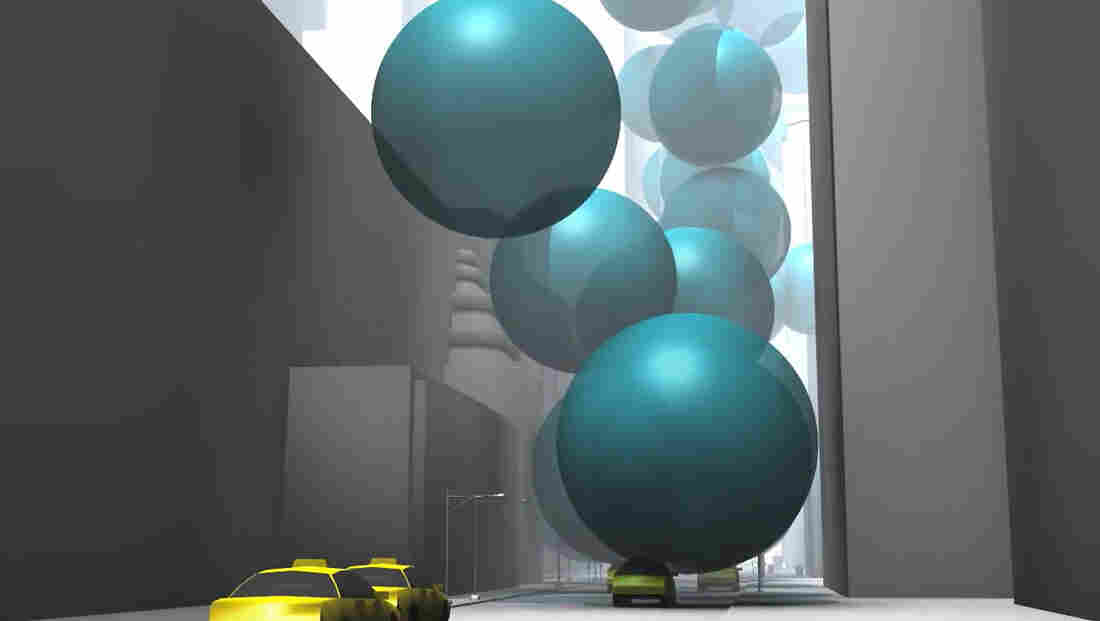 The mayor has an Office of Long Term Planning and Sustainability (that includes Jonathan Dickinson and Andrea Tenorio and staff) and they decided to measure how much carbon dioxide escapes into the New York air. To make the data more visual, they assumed every day in New York is a nice day, where the temperature is 59 degrees Fahrenheit, and where, under standard pressure, a ton of CO2 gas would fill a lovely blue bubble 33 feet across like the ones you see down there, rising from the traffic. 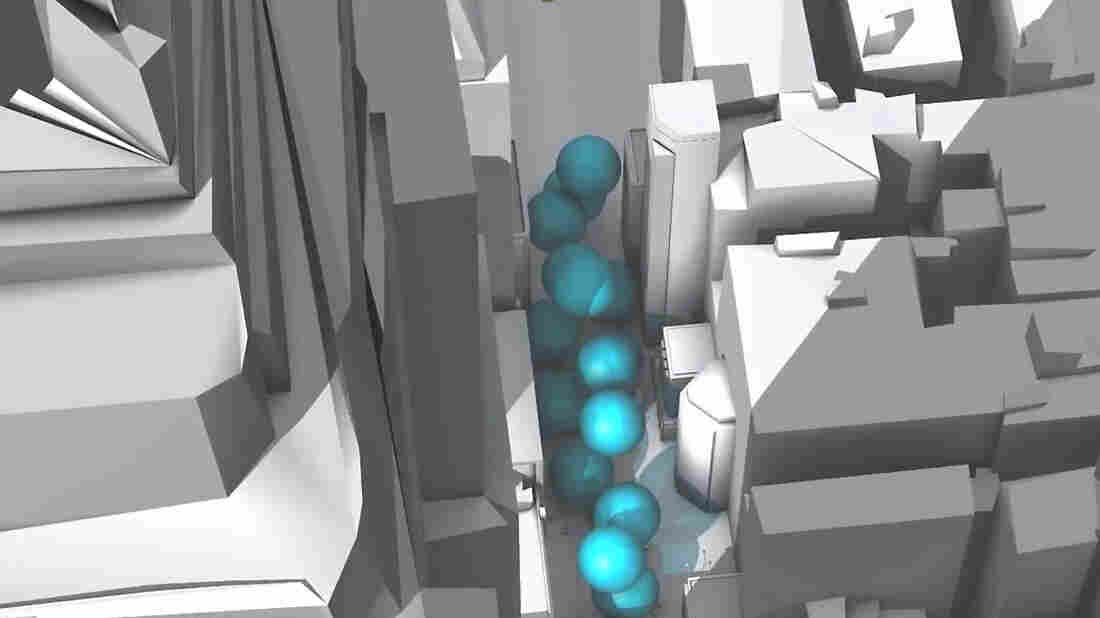 Then they asked, "if we took all the CO2 coming from vehicles, buildings, power plants across the city and gathered them in a clump, at one spot right next the Empire State Building, how much CO2 is emitted in a single hour? This is what they found. 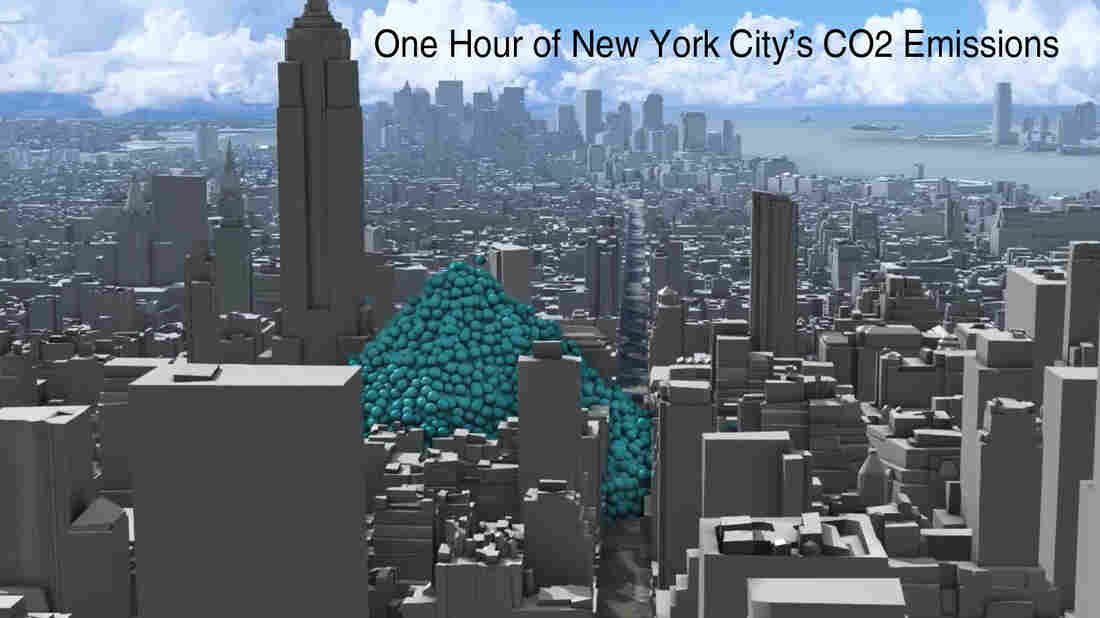 That's one hour. How about a day? How much CO2 does New York City produce in a day? 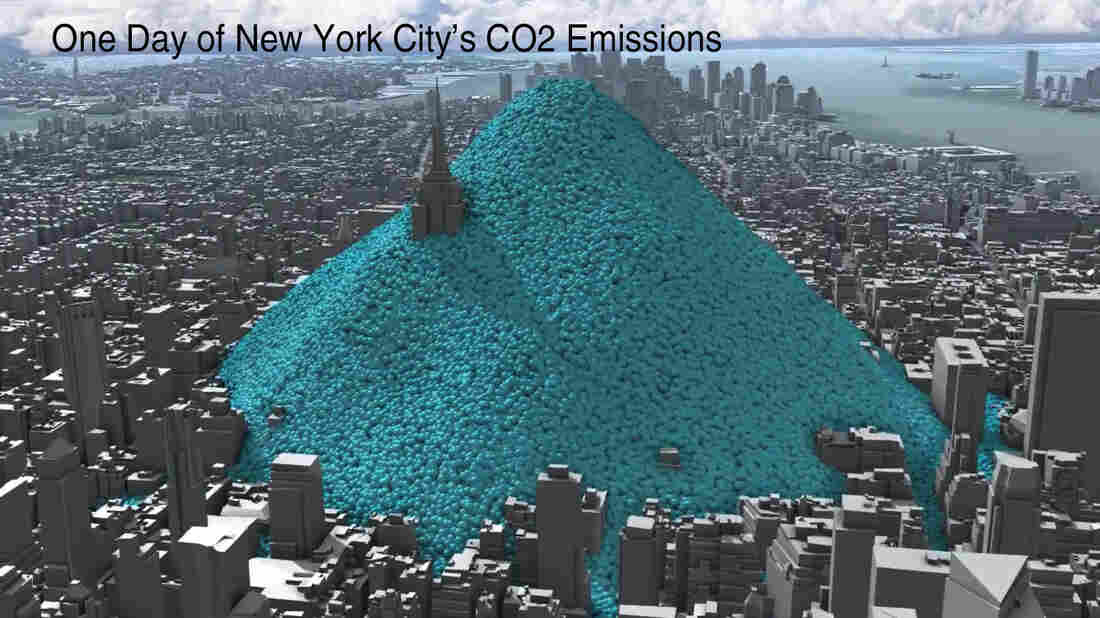 This isn't looking so good, especially if you believe accumulating greenhouse gases may increase the ferocity of storms coming in off the Atlantic. So let's take a deep breath and ask how much CO2 does New York City create in a year? 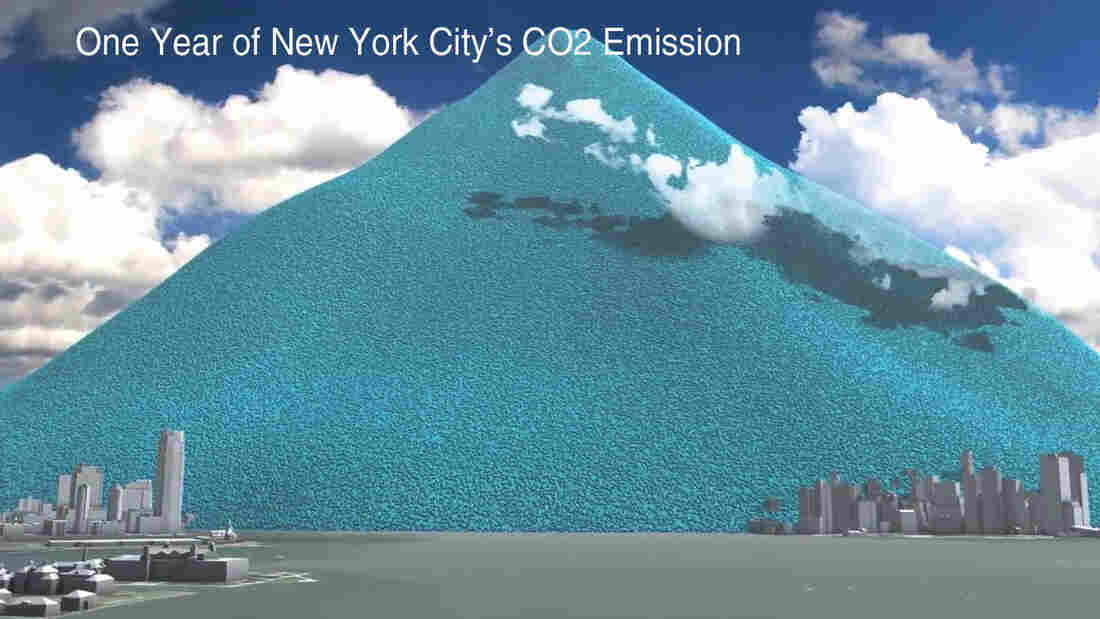 "Oy," as some New Yorkers like to say. This is a whole lot of gas, several tons per person. This is not what I was expecting. 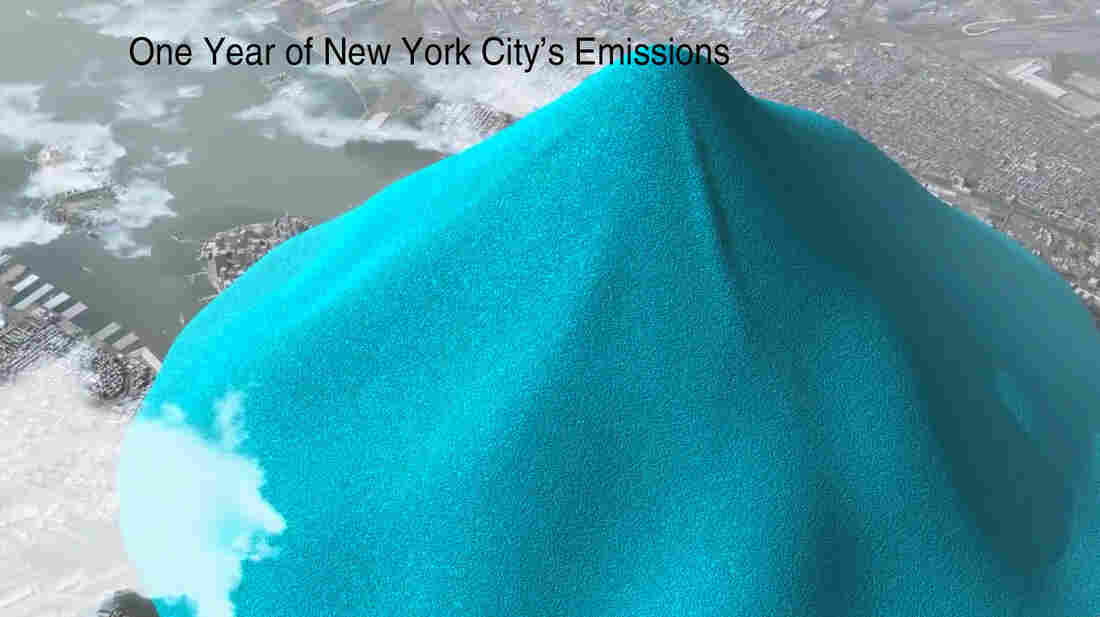 So what are we to think? This graphic is just a snapshot of New York. It says nothing about how the city compares to Ft. Worth, Texas, or Bar Harbor, Maine, or Shanghai. Just because it looks horrible, doesn't mean, it is horrible, though these images leave me with the unmistakable sense that New York is being strangled under a mountain of its own waste.

Is it? (And why, by the way, is the Mayor's staff creating pictures like this? He wrote the forward to their report, so he wants us to see these pictures. What's up with that?)

For some answers, I called up a climate scientist who lives and works in my neighborhood, Pushker Kharecha of Columbia University's Earth Institute. He, like me, wakes up every day to what are often blue skies. I assume he takes deep breaths. I asked him, "Is this as bad as it looks?" And he said. "It's grim, yes," but there are, he thinks, a few silver linings.

For one thing, he says, as I suspected, New York isn't as bad as other places. If you compare cities to suburbs and rural areas, cities are often more energy efficient. People who live in detached houses, who drive everywhere, whose power comes from coal and gas, often have much higher CO2 emissions per capita.

A recent study compared 12 large (and mostly rich) cities around the world with the average emissions of their respective countries and the cities did nicely. New York City's per capita emissions are about a third the U.S. average.

So we're dirty, but we're three times more efficient than typical Americans. The same goes for residents of Toronto and Barcelona, they're three times better than their countrymen. Tokyo, London and Seoul are about twice as efficient.

Cities, even rich ones, perform differently. In this list of 12, starting with the dirtiest, New York comes in fifth. These are greenhouse gas emissions per person (What's with Washington?)

Cities differ because some have lots of factories, some don't. Some have more refrigerators, air conditioners, fancy appliances than others. Some have more modern, tighter buildings, more office towers, more public transit. (Washington is warmer, often stifling, is that why it's such an emitter? Can we blame air conditioning?) But whatever the differences, that pile of bubbles still gets to me. 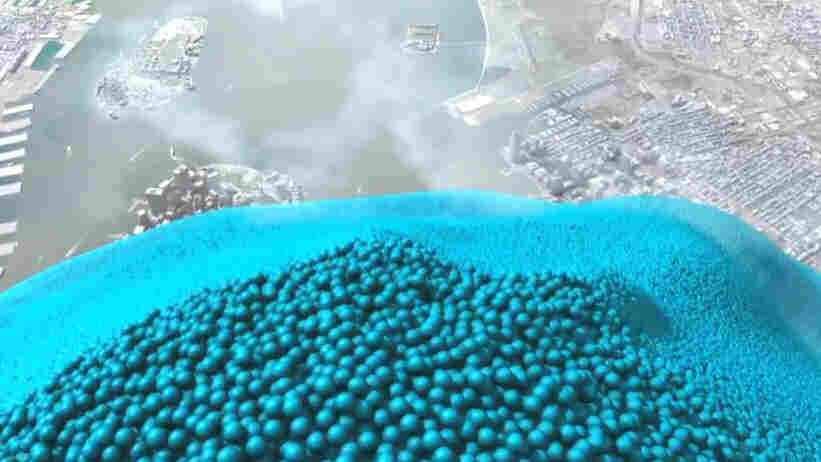 If whenever people gather — and that's what we do, we gather — we produce this much waste or worse, what am I to think? Mayor Bloomberg's video images feel like a dark prophecy, a prediction of doom.

"Grim," says Pushker Kharecha, but doom? Nah. He says there are two challenges here: we must eventually wean ourselves from coal, gas and carbon-rich fuels, but in the meantime, we can cut down on the bubble-making by redesigning cars, putting more people in buses, subways, creating tighter, ever-more-efficient buildings, adjusting our values; those are real, achievable goals."Combating climate change is one of the great challenges of our age," Mayor Bloomberg says in his forward. His video was meant to warn us, not to scare us.

Well, here it is. Take a look, and you decide. Are you scared or are you pumped?