Accessibility links
Strange-Looking Tombstone Tells Of Moving Ice, Ancient Climates And A Restless Mind : Krulwich Wonders... It's a tombstone like no other. A rough, clumpy hunk of granite, carried across Europe on a sea of ice, dumped in a valley, shipped across the Atlantic, lugged to Massachusetts — all to honor a restless man.

With glaciers melting and crumbling all over the world, let me tell you the story of the man who first imagined ice ages, the man buried under this stone in Cambridge, Mass. It's an odd gravestone; a rough, clumpy hunk of granite that doesn't look at all like the other markers at Mt. Auburn Cemetery. 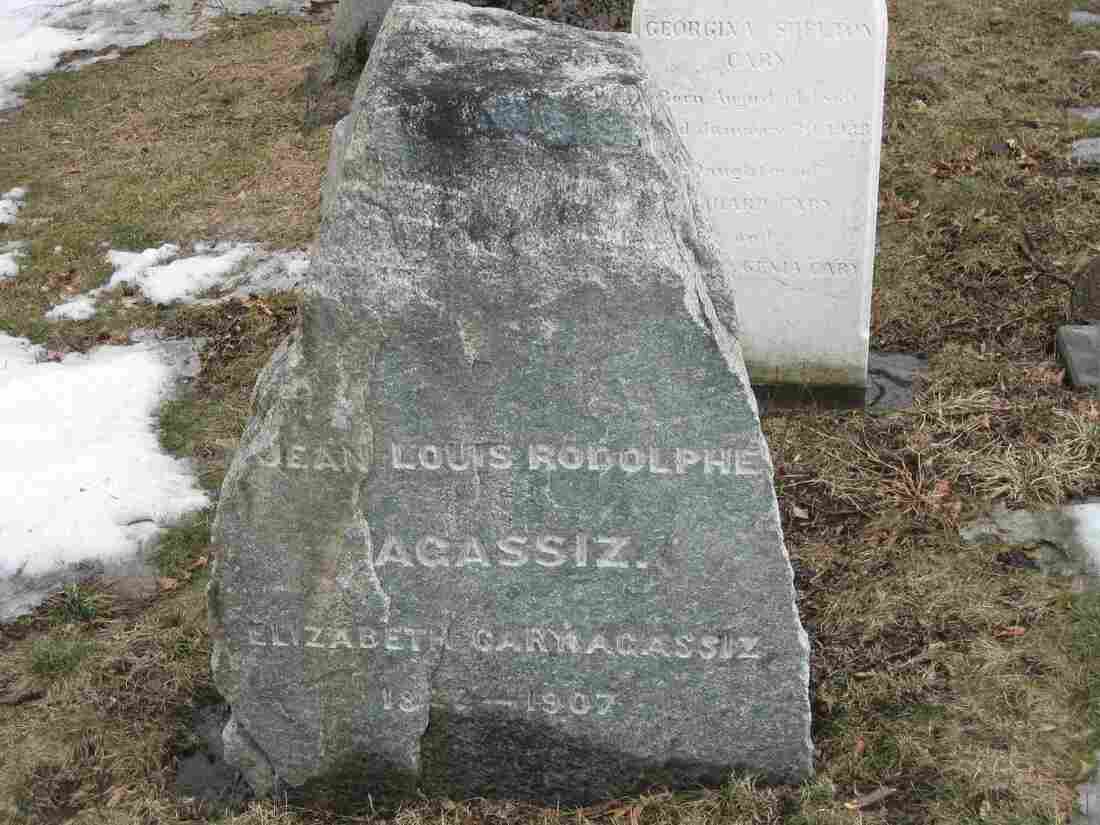 That's because it isn't. It's an erratic. A single stone found sitting downhill from a glacier in Switzerland that was lifted, packed, shipped to all the way to Massachusetts to honor this man. 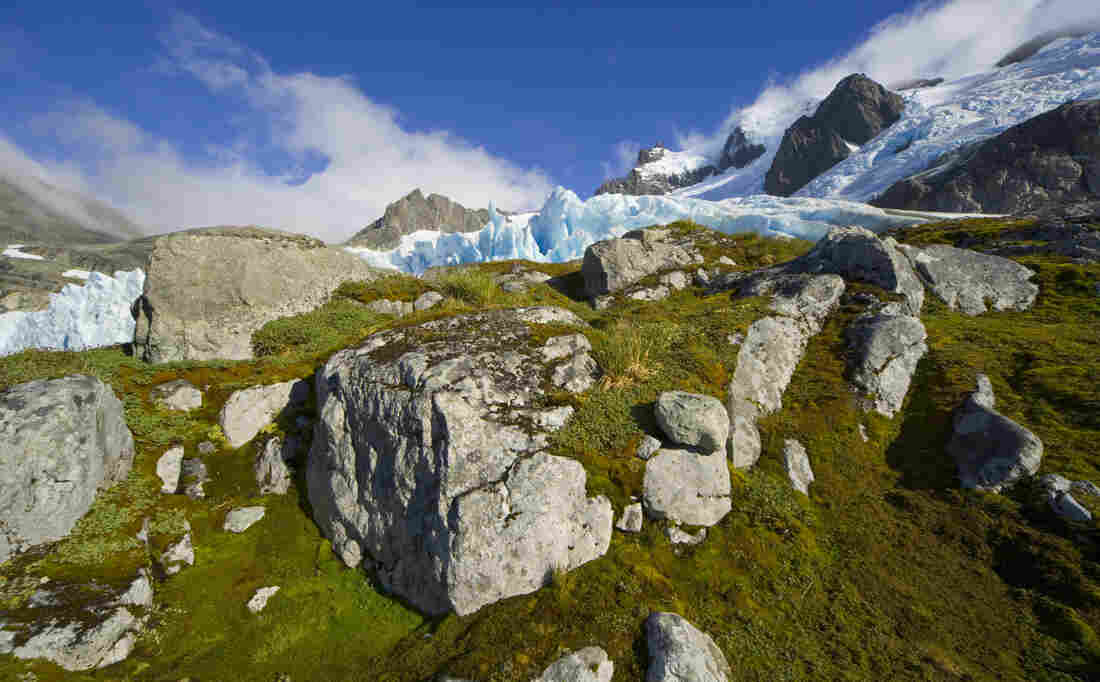 Louis Agassiz was one of the first scientists to make sense of rocks like these. In the late 1830s, he was on vacation in Switzerland visiting a friend, and the two of them went up to an Alpine glacier to look around. The friend said he had a hunch that glaciers in Switzerland used to be much bigger, that they'd covered not just the mountain tops but the valleys as well, and as evidence, he showed Louis some boulders that had tumbled out of the ice, and were now sitting by themselves. Those huge rocks didn't look like any of the stones nearby. The friend, Jean de Charpentier, thought maybe the ice had gouged them from distant places and carried them south as the glaciers grew. Now that the glacier was melting, he said, it was dumping its cargo.

He then took Louis down the hill to show him more boulders, some of them stuck precariously on ledges, some tilted, some all alone. Louis looked, thought, then thought some more. A year later, in 1837, he gave a stunning speech to the Natural History Society of Switzerland. 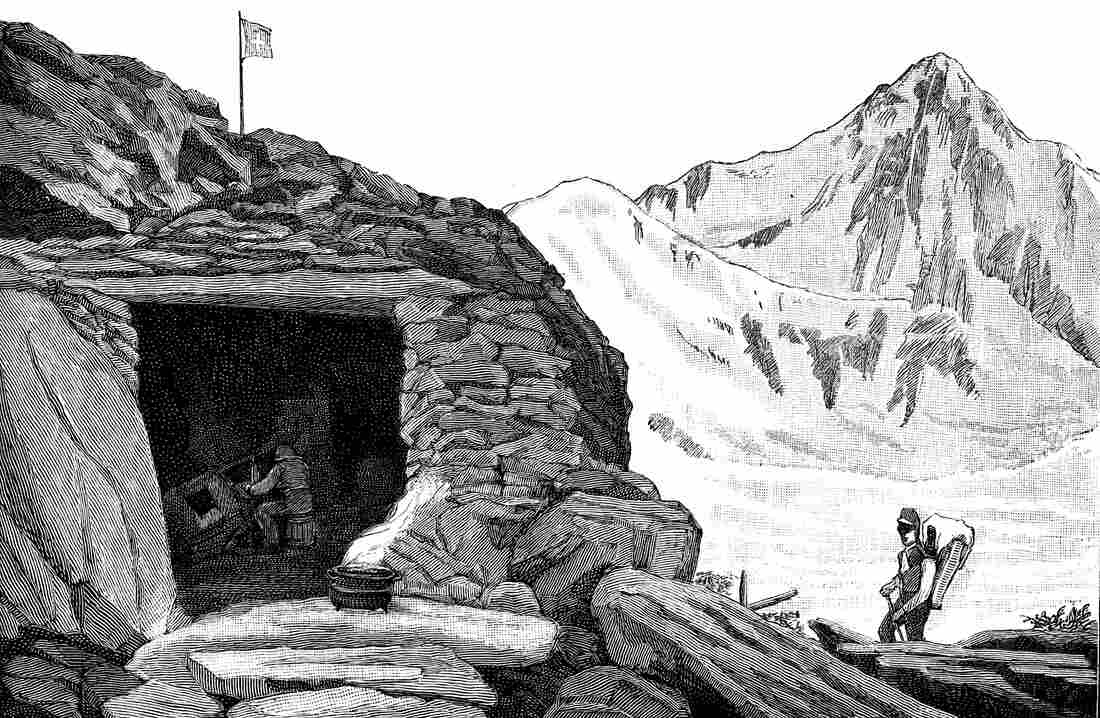 He'd been invited to talk about Brazilian fish, his specialty, but instead he talked about ice. In his book Cold, Bill Streever tells how Agassiz stood before the leading scientists in his country and painted them a preposterous scene.

Once upon a time, he told them, a great sheet of ice, miles thick, had covered the Earth from the North Pole all the way to the Mediterranean. That ice had not always been there. Climates, he said, can change — dramatically. The Earth warms, then cools. The ice sheets on Swiss mountaintops were remnants of an earlier, colder "ice age." 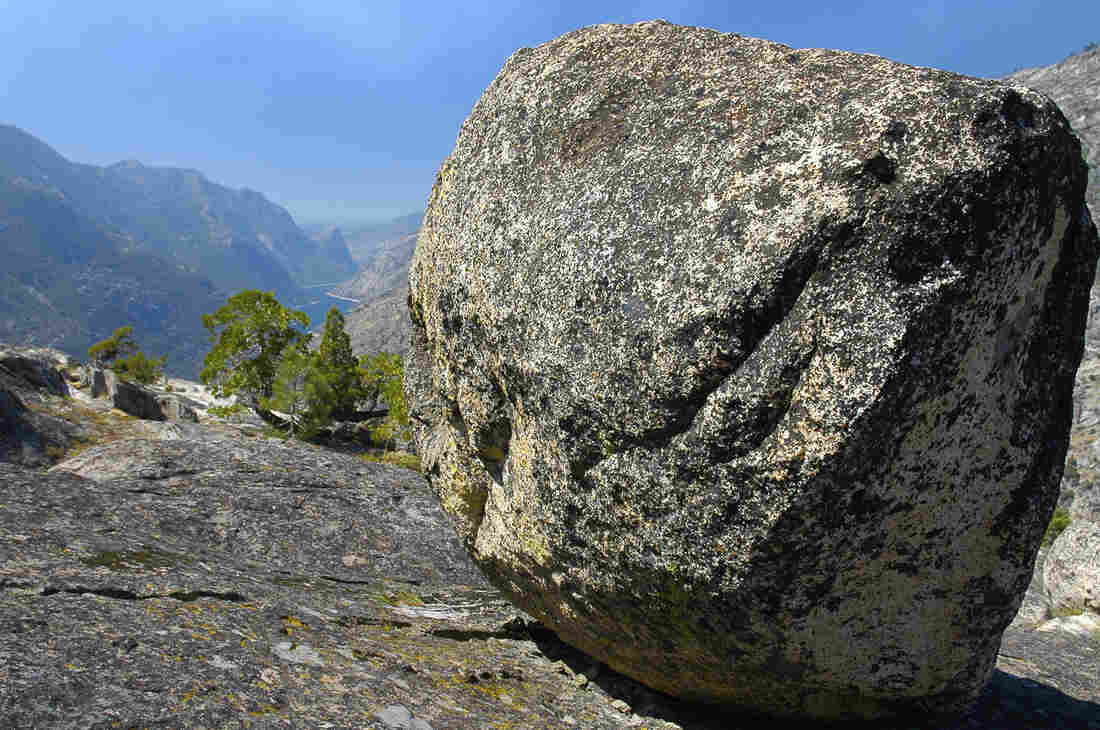 He went further: These rocks had not been scattered by Noah's great flood, lasting 40 days and 40 nights. No, these boulders were mineral evidence of changes that took place long, long ago.

He knew they'd think him mad. "I'm afraid," Streever quotes him saying, "that this approach will not be accepted by a great number of our geologists..."

In the book that followed, Etudes sur les Glaciers,Agassiz wrote that the ice sheet had happened suddenly: "The land of Europe, previously covered with tropical vegetation and inhabited by herds of great elephants, enormous hippopotami, and gigantic carnivore, was suddenly buried under a great expanse of ice, covering plain, lakes seas and plateaus alike."

We now think (or certainly hope) that Agassiz was wrong about the "suddenly" part, probably wrong about a single ice sheet burying all of Europe, wrong about all life disappearing, but about the big thing, he was very right: climates do change on Earth. They've done that for billions and billions of years, and the changes have been drastic.

In America, his ideas found a friendlier audience. He was invited to teach at Harvard, and became a professor there. He died in 1873, and his grave is a radical celebration of his radical ideas.

Taken from a pile of rocks in the Swiss Alps, called a moraine, it was sent by boat across the Atlantic, carried to Cambridge, and having moved much further and farther than even the most well-travelled rocks, you could say, this marker is a perfect emblem for a daring mind: 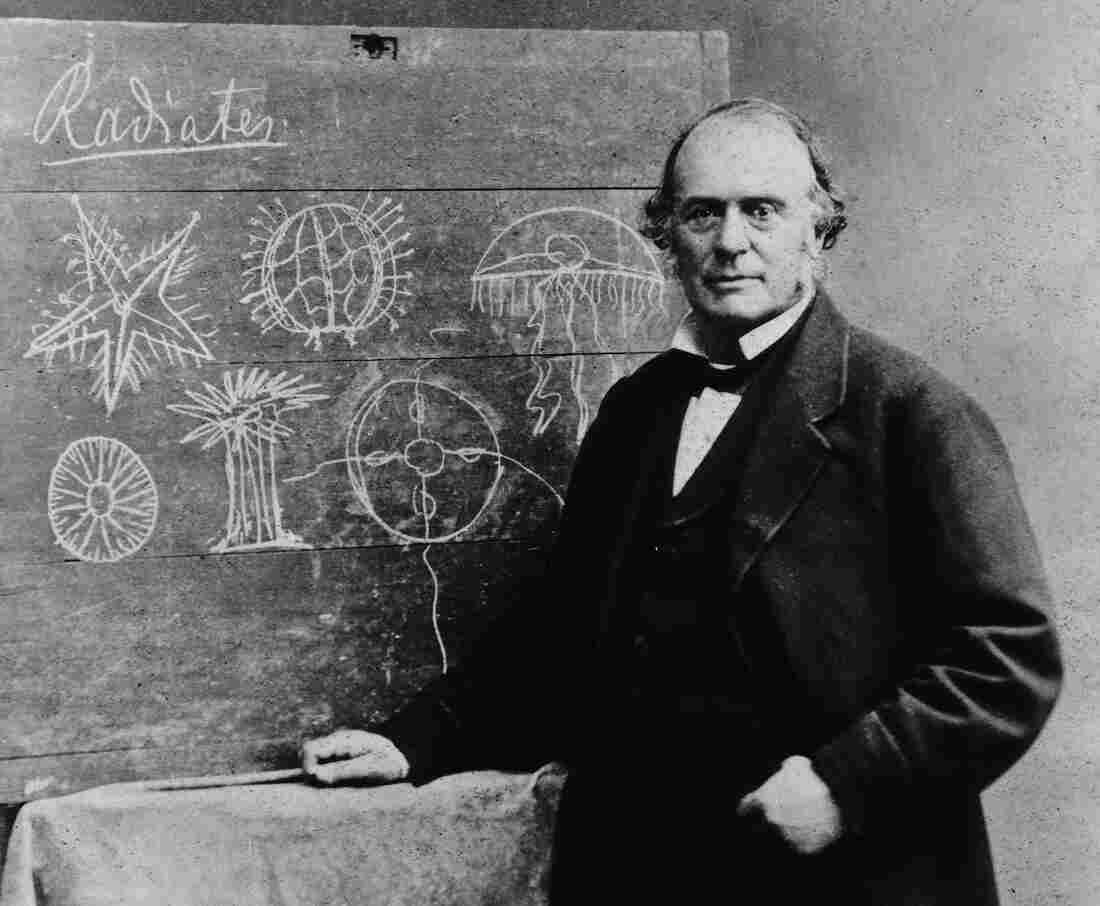 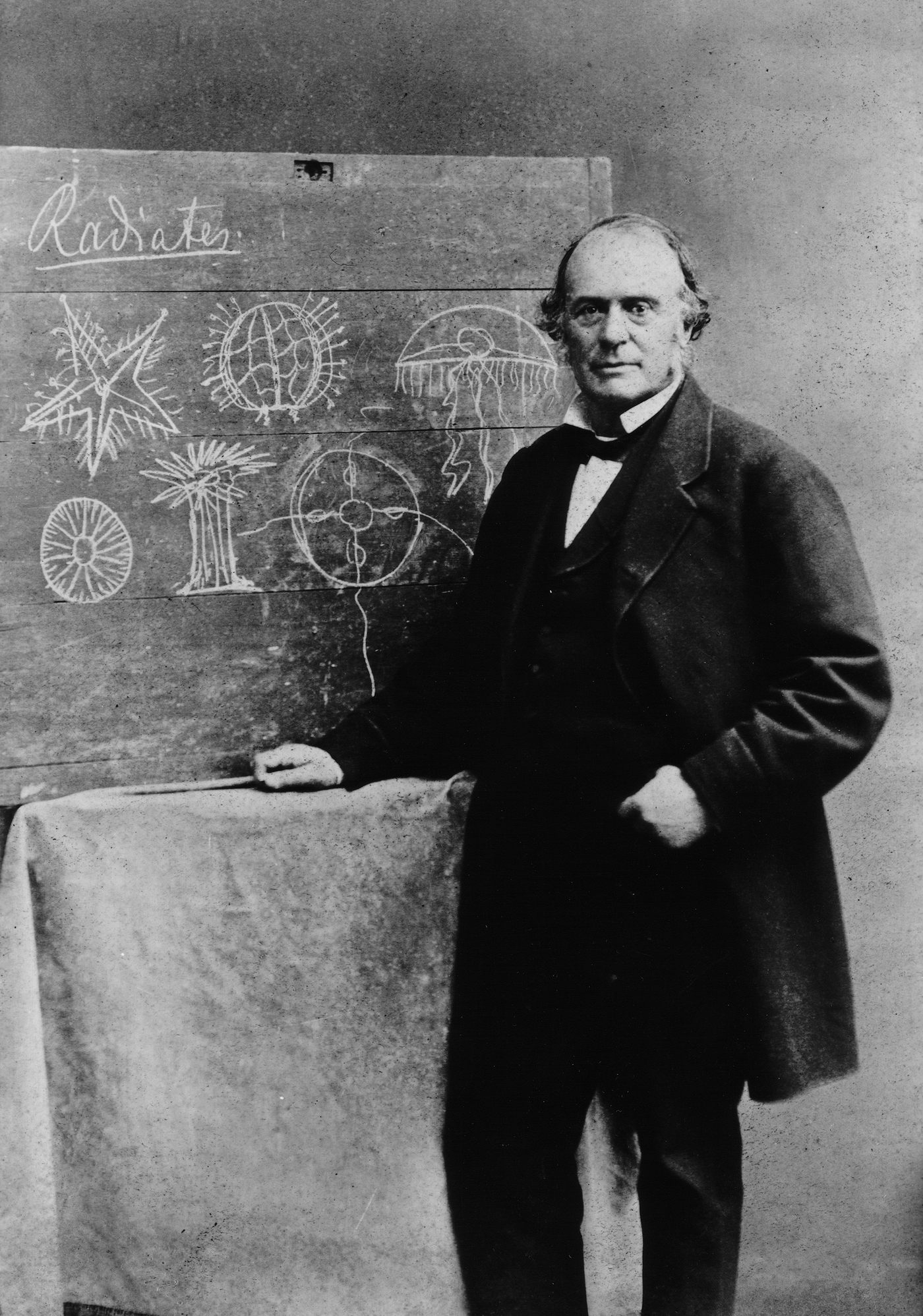 Bill Streever's description of Louis Agassiz's grave comes from his book Cold: Adventures in the World of Frozen Places. Louis Agassiz, a true erratic, fiercely opposed Darwin's theory of evolution, insisting that while the Earth may change over time, creatures never do. Each species, he thought, was specifically created by God. He did not use the Bible as scientific authority, but he felt that God's transcendent authority did not allow for species to blur and produce ever-changing forms of life. Many of his students opposed him, even left him, but he would not relent.