Accessibility links
Pigeon Interruptus — A Fish That Hunts Pigeons On Land : Krulwich Wonders... There you are, hanging with the other pigeons. It's a sunny day. Tranquil. You are taking a bird bath along a river's edge, when suddenly, leaping out of the water onto the land, straight at you — is a fish! A pigeon-eating catfish. (We've got pictures.)

Pigeon Interruptus — A Fish That Hunts Pigeons On Land

Pigeon Interruptus — A Fish That Hunts Pigeons On Land 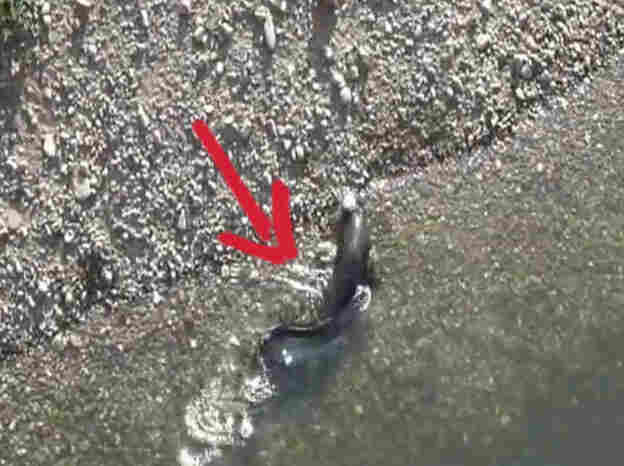 In science, categories matter: phylum, family, class, species, solid, liquid, endo-, exo-, we analyze by creating groups, by making clean distinctions. Nature, on the other hand, is messier. It defies categories, at least at the edges. There is always something in the group that isn't doing what it's supposed to, that doesn't quite fit. It's those exceptions that make the world so surprising.

Fish, for example, generally eat other fish. But at the edges, and I mean literally the edges of the water, there are sea creatures that jump onto the land to eat land animals.

Killer whales are the greatest example (see below). But the latest addition is a catfish that hunts pigeons.

We are in southwestern France, along the river Tarn, where there's a small hunk of gravel at the river's edge where pigeons like to gather. What the pigeons don't know is that right next to them, hiding in the water, is a European catfish.

At extraordinary risk to themselves, these catfish will leap onto the beach, snatch a moving pigeon, and then, bearing the struggling bird, they roll or push themselves back into the water. There is a real chance they won't have the energy or the talent to get back to watery safety, but biologist Julien Cucherousset, filming from a bridge above, saw 54 attacks, and 28 times, he reports, the fish got its pigeon.

On the other hand, when you watch this video, notice in the third attack, there's a pigeon sitting in the sun suddenly yanked and pinned by a dark thing that emerges out of the water. He (or she) struggles, gets free, and then with what seems like amazing matter-of-factness, he waddles back onto the beach as if nothing odd has happened.

I found Professor Cucherousset's paper (with others) on Ed Yong's blog, Not Exactly Rocket Science. Go there to find out what it says about how catfish do it. Cucherousset called the study "Freshwater Killer Whales" because he was reminded of those brazen orcas that, in spite of their enormous hulk, fling themselves high up a beach to grab a seal and then roll 10, 20 feet back to the water — if they can. It's a very dangerous way to hunt, and it inspired one of the most remarkable BBC wildlife videos I've ever seen.

Two photographers, one in the water with the orcas, the other sitting with baby seals on the beach, filmed a real-life killer whale attack. The beached photographer assumed (what was he thinking?) that the incoming killer whale would notice that the animal with the camera was NOT a seal, and so he'd be safe. David Attenborough did a video about this. If you've never seen it, take the time. It's just six minutes, and it's brilliant.