Accessibility links
'No, Thank You': The Mysterious Transformation Of 50-Year-Olds : Krulwich Wonders... American men are at the top of their shirt-buying game in their early 50s. Then something drastic happens.

'No, Thank You': The Mysterious Transformation Of 50-Year-Olds

'No, Thank You': The Mysterious Transformation Of 50-Year-Olds

Harry Dent, a financial newsletter writer, has been looking at the Census data, and he's uncovered something odd about American adults. When we turn 50, we dramatically change our clothes-buying habits. It's not gradual; gradual is what we'd expect. Instead, the change is drastic.

You can see it with men's shirts. In our early 50s, American men are at the top of our shirt buying game (either buying more shirts than at any other time in our lives, or maybe we're buying more expensively). Then watch what happens: 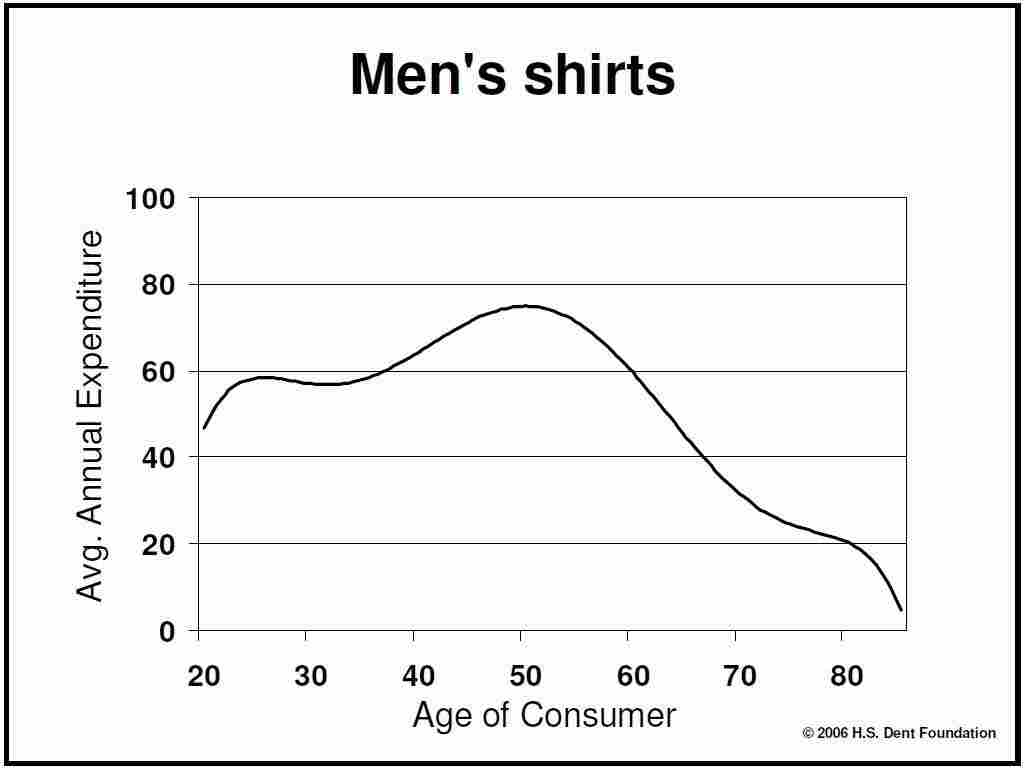 You see the same pattern in men's coats, jackets and furs (though the turn seems a year or two earlier): 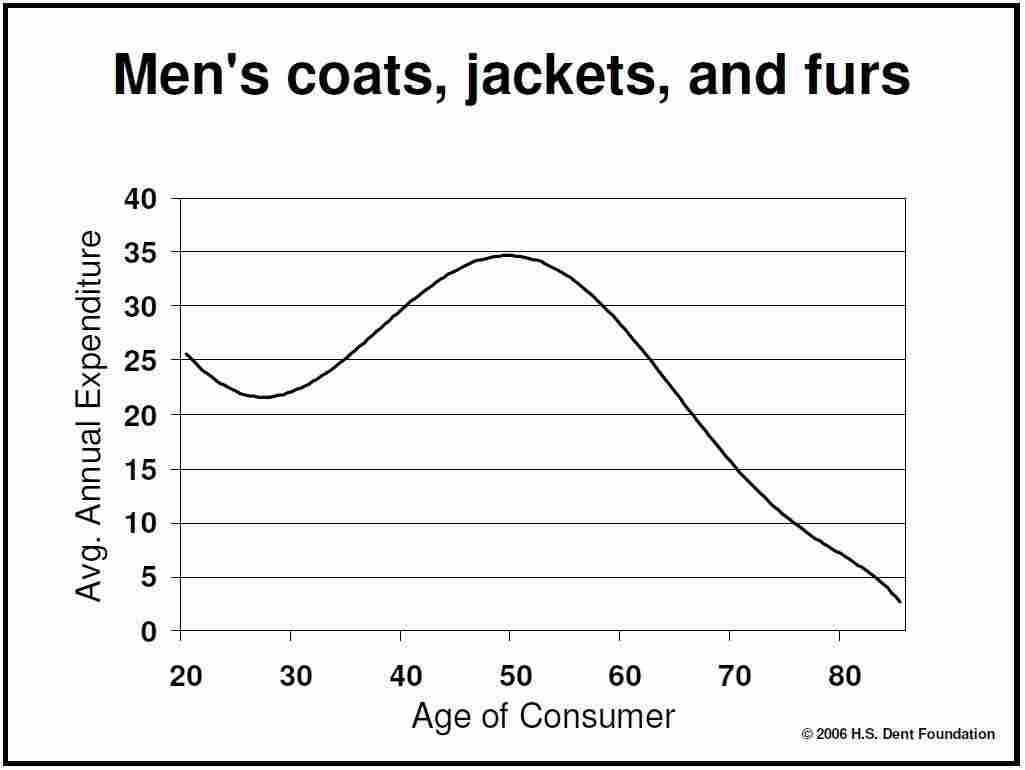 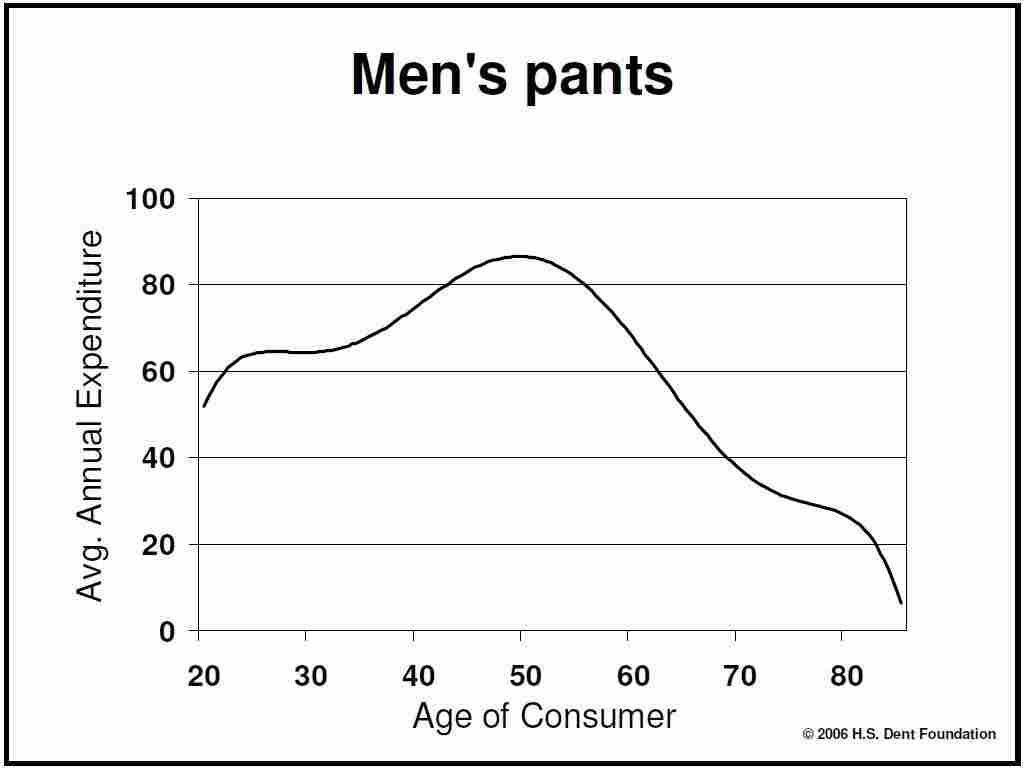 But how do you explain this next one? Men's underwear is deeply invisible (except in a locker room at a gym, where the ones who get to see it are other guys, and other guys, I'm betting, are paying no attention) so you have to wonder: Why do purchases rise when a man is between 20 and 50? Are wives/girlfriends/partners buying for us and trying keep us looking crisp? Or at least untattered? If so, why do they suddenly give up after 50? I don't trust this curve. 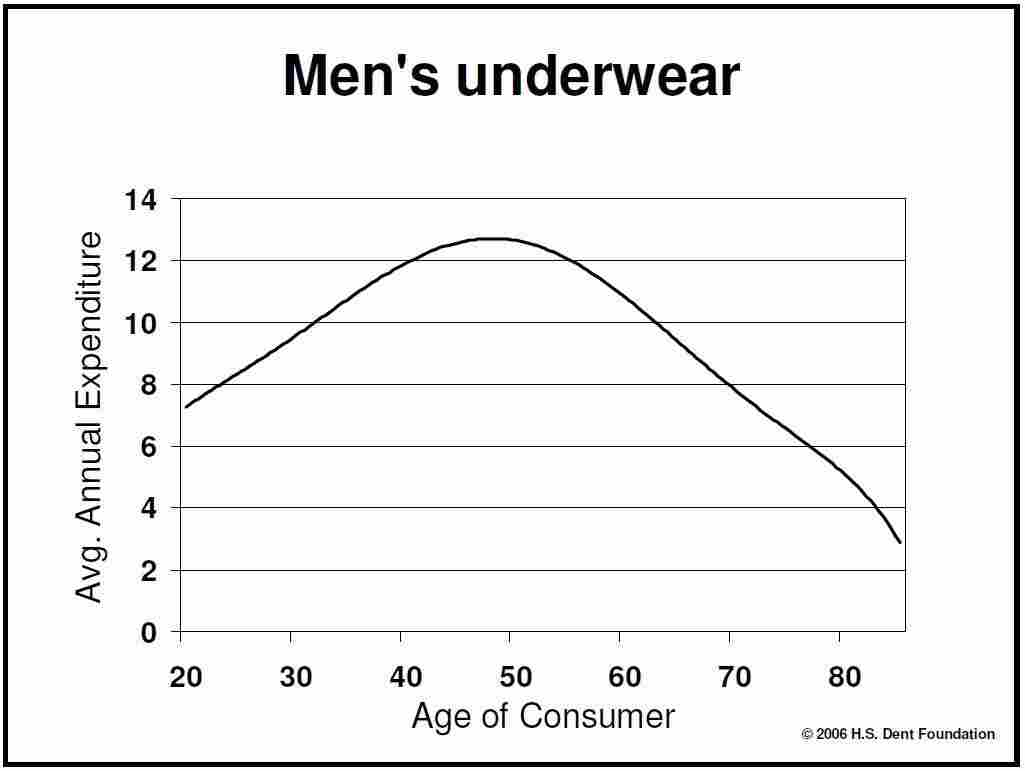 And this next one is a complete mystery. (But not when I checked with many of my friends, so maybe I just don't live like my peers). We spend our adult lives buying shoes and sneakers, wearing them out and replacing them at a constant rate. Unlike shirts, pants, suits, even underwear, there is no rising curve. Footwear is a constant. Until, once again, our mid-50s, we rather suddenly — stop. Does this mean there's more shoe repair going on? Do we learn to tolerate holes in our soles? Is there less walking? That much less? 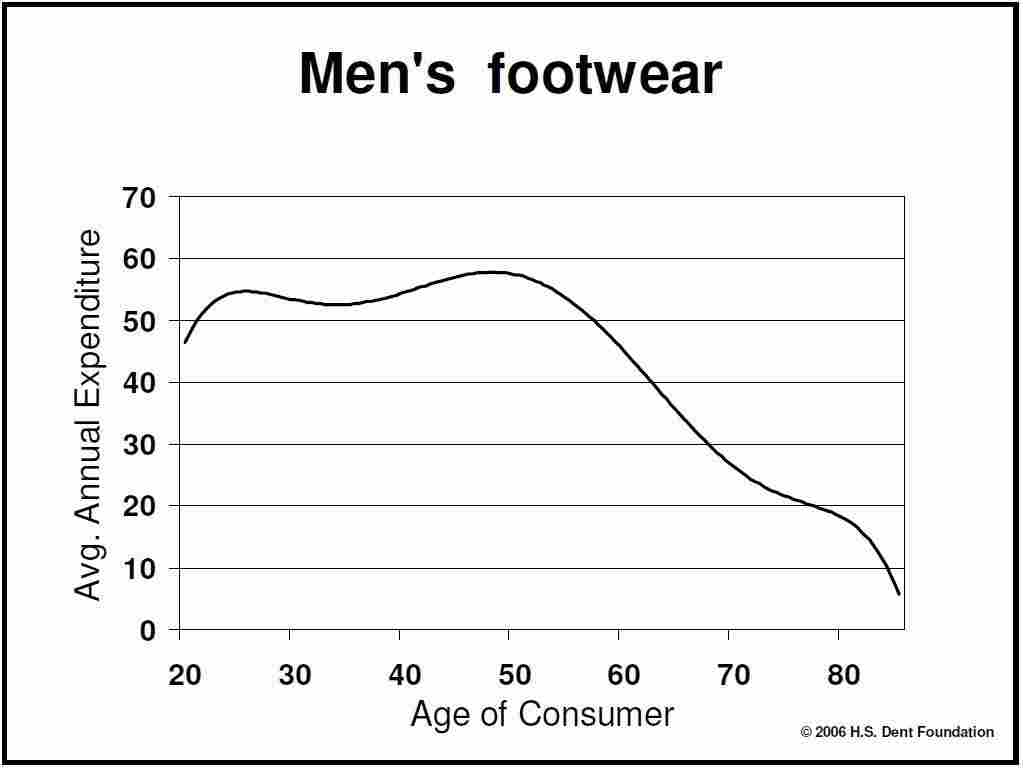 Harry Dent's collection of "Demand Curves" are all online here so you can browse through them on your own. Women, you will find, have the same pattern men do, but the turn, (also in their 50s) is softer. As they approach 60 the slide begins — footwear goes, undergarments go, but a little more gently.

In searching for explanations, it occurs to me that the male and female silhouette may change, and change mightily in one's 30s and 40s, we have to buy new sets of clothes to cover up what's happened. After 55, we may settle in, body type-wise, and what's in the closet will keep working for us all the way home. I'd be curious if you folks reading this have explanations to offer. Or doubts, if you have them, about the underlying data.

Harry, by the way, isn't only interested in clothes; He has graphs for toys, tools, services, furniture, subscriptions, and some of them have their own mysterious subplots. Take a look at his chart for patio furniture. It's totally predictable all the way till the end, when the consumer approaches his or her 90th birthday. Suddenly, there's a spurt. What might these folks be purchasing? Something you use outside ... 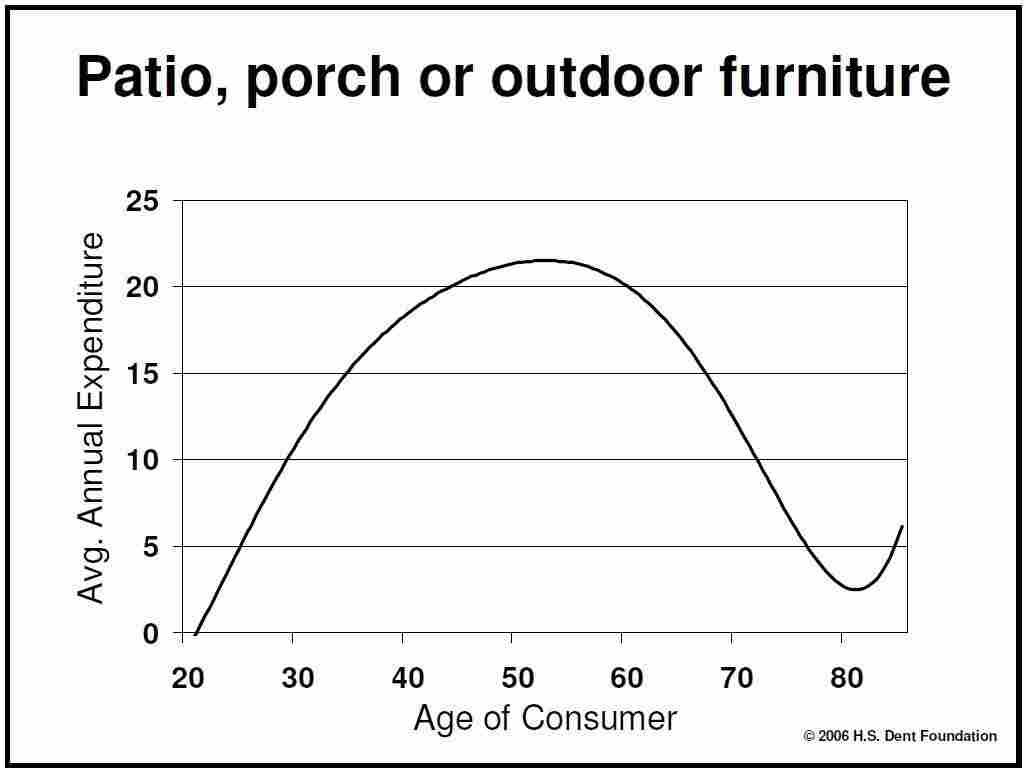 Harry Dent, I should mention, has written several books about a coming financial collapse (The Great Crash Ahead, The Great Depression Ahead) as baby-boomers reduce their spending, so he's got a thesis — that as the Baby Boomers retire, there will be less spending across the board until the 2020s — and these Census-based charts may be selected to push his views about our future. But whatever his biases, these data are, presumably, gathered by Census workers with no particular future in mind — which is why I find them so fascinating. If somebody out there knows something bogus about how the government creates these demand curves, please write in and let us know. Meantime, I'm just going to slip into my new sneakers (purchased merely three months ago, after an earlier sneaker purchase the year before) and let my neighbors wonder at my gleaming magnificence.