Accessibility links
The Oldest Rock In The World Tells Us A Story : Krulwich Wonders... The oldest rock in the world isn't even a rock. It's a teeny grain, a zircon, found inside a bigger rock. But what it's telling us is huge. It's rewriting the early history of the planet.

It's hard to imagine how this teeny little rock — it's not even a whole rock, it's just a grain, a miniscule droplet of mineral barely the thickness of a human hair — could rewrite the history of our planet. But that's what seems to be happening. 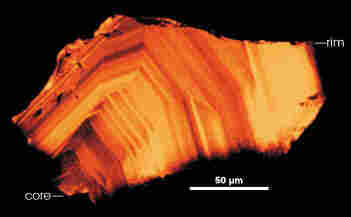 What is this? It's a zircon, from the Persian word "zargun" meaning "golden colored," an extremely durable mineral found all over the world. This one turned up in a dry, hilly region of Western Australia. It was sitting inside a larger rock, and when scientists checked, it turns out this little grain formed around 4.4 billion years ago. That would make it the oldest rock we've ever seen on this planet, old enough to know secrets about early Earth, old enough to tell us a little something about how life started here.

After all, this planet, geologists say, is only 4.5 or 4.6 billion years old. So this little grain has been around since almost the beginning — but not quite.

It's about 150 to 300 million years short. No surface rocks survive from that earliest time because back then, we figure, volcanoes were blowing up constantly, rocks were being heated, vaporized, melted, pulled down into the earth. There were oceans of burning lava everywhere; asteroids were crashing in from above, setting the air on fire. In the beginning, Earth was not a nice place. 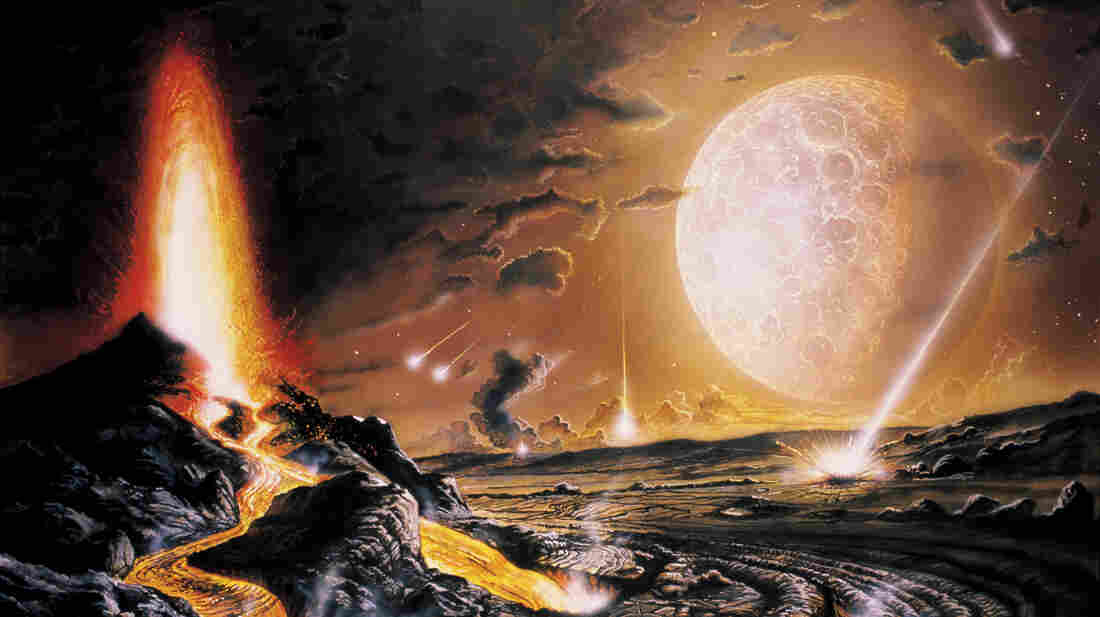 This period has a name; it's called the Hadean Eon, from the ancient Greek, Hades — basically, a polite term for "hellish." Hell melted all the rocks on the Earth's surface, and when it's as hot as Hades, you can't have life, either. The Earth had to wait for its first living creature until later — till things cooled and quieted down. That, anyway, is what we used to think.

What The Little Rock Is Telling Us ...

... Until scientists took a closer look at this grain, this pebble. (I can't tell you how amazed I am to tell you what I'm about to tell you ... sometimes the sheer intellectual audacity of these sciencey tales makes my eyes bug). 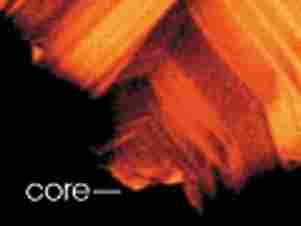 When geochemists Bruce Watson and Mark Harrison looked more closely at this grain, they could see where it "started." Crystals are minerals that grow, or harden from a hotter, liquid state, and this crystal got its start on the lower left, in the spot marked "core."

Then, as things cooled, this rock grew, adding more and more bands. You can see those bands, angling off to the right. Here's the thing about rock formation: As crystals grow, they pick up other minerals, whatever's in their path. It's like they're plucking hitchhikers off the road. When this little pebble grew, it grabbed on to little bits of titanium.

Geochemists know that zircons will grab more titanium when it's hotter, less titanium when it's colder, so if you count your titanium concentrations, you can figure out how hot it was when the rock formed: X amount of titanium, for example, means it was 600 degrees Celsius when it grew; Y amount of titanium means it was 350 degrees Celsius. Scientists call this equation "the titanium thermometer."

So Watson and Harrison counted titanium concentrations in a bunch of these very old zircon grains, matched them to the thermometer, and discovered that when these zircons formed, the temperatures ranged from about 680 degrees Celsius, plus or minus 20.

To geologists, this was big news, like finding a swimming team in what you thought was a desert.

Rocks that crystallize at these temperatures have been exposed to water. This is something geologists know. Says Professor Watson:

"Any rock heated in the presence of water — any rock, at any time, in any circumstance — will begin to melt at between 650 and 700 degrees. This is the only terrestrial process that occurs so predictably."

So, all of a sudden, here was evidence that the red hot, lava-laced, boiling, lifeless Earth of 4.4 billion years ago had water on it! What's more, Watson says, "we feel our results point more strongly toward the idea of surface water." 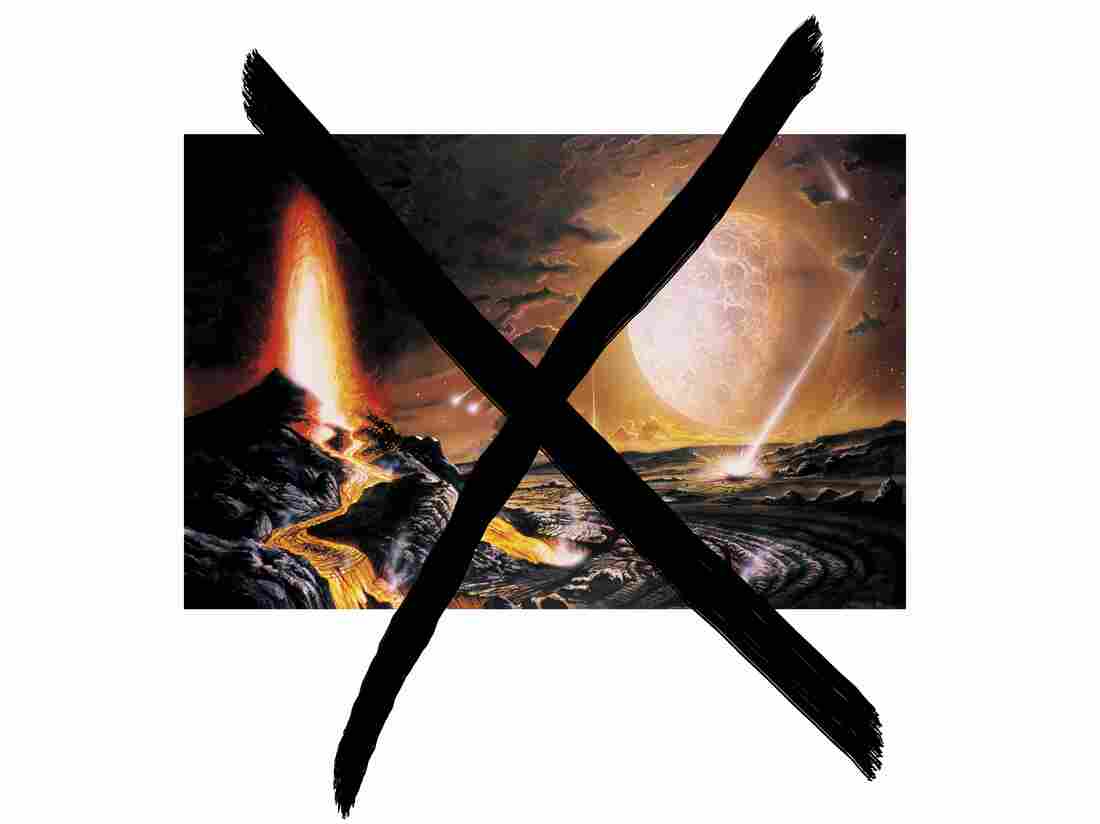 That is "a radical departure from the conventional wisdom," says Professor Harrison. It suggests that even though meteors and asteroids were bombarding the Earth, even though volcanoes were highly active, there must have been intervals — early, early on — maybe in the first 150 million years of Earth history — where the Earth could catch a breath, quiet down and create an ocean. 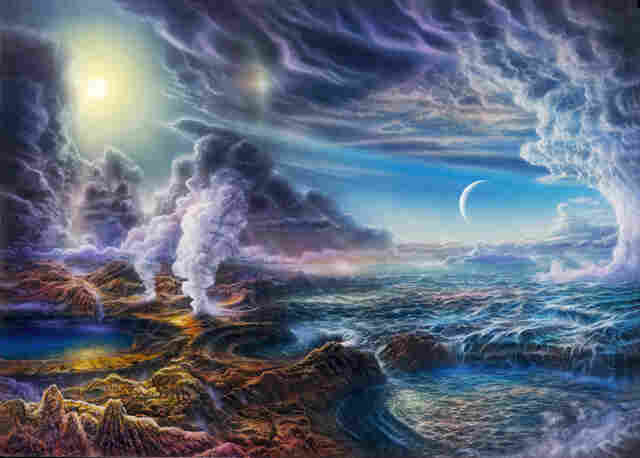 And, yes, every so often a monster asteroid would blow that ocean into the sky, but maybe not the whole ocean? Maybe on some corner of the planet, enough water remained to allow a heat-loving microbe to form.

OK, you say, but what's the point? Why are your eyes bugging?

Is Life Like A Racehorse? Primed? Ready To Run?

Here's why: It is now possible to imagine that life began on Earth almost as soon as the Earth began — that life (in the presence of water) is, if not inevitable, at least very insistent. Once you've got a planet with water — BINGO!

If that's true, chances for life in the universe suddenly improve — dramatically.

Here on Earth, life could have formed, been blown away, then formed again — and one of those times, down at the bottom of some temporary ocean, sitting by a warm vent — it stayed.

That's what this teeny chip of a rock is now allowing us to think: that life has such potency, such urgency, that as soon as life is possible — life happens!

That's a mighty big story to find in a pebble.

Professor Bruce Watson's quotes come from an interview here conducted by Rebecca Lindsey and David Morrison in 2006. Mark Harrison is quoted in Craig Childs' new book, Apocalyptic Planet, Field Guide to the Everending Earth. The latest puzzler for early Earth historians is how could there have been liquid water on the Earth's surface 4.5 billion years ago when the sun was so much dimmer? Why didn't the oceans freeze? Radiolab regular Carl Zimmer weighed in on that one on his blog The Loom.