Accessibility links
Nature Has A Formula That Tells Us When It's Time To Die : Krulwich Wonders... What if I told you that there's a mathematical formula buried deep in living things that tells us — all of us, dandelions, gorillas, sea grasses, elm trees, buttercups — when it's time to die. Scientists think there is such rule. It has to do with size.

Editor's Note: Robert has added a postscript to this post. Scroll down or click here to read it.

We wax, we wane. It's the dance of life.

Below the pulse, which you see here, elegantly captured by Shanghai photographer/designer Yunfan Tan, is a life/death cycle, a pattern that shows up in the teeniest of plants, (phytoplankton, algae, moss), also in the bigger plants, (shrubs, bushes, little trees) — and even in the biggest, the needle bearing giant sequoias.

Everything alive will eventually die, we know that, but now we can read the pattern and see death coming. We have recently learned its logic, which "You can put into mathematics," says physicist Geoffrey West. It shows up with "extraordinary regularity," not just in plants, but in all animals, from slugs to giraffes. Death, it seems, is intimately related to size.

Life is short for small creatures, longer in big ones. So algae die sooner than oak trees; elephants live longer than mayflies, but you know that. Here's the surprise: There is a mathematical formula which says if you tell me how big something is, I can tell you — with some variation, but not a lot — how long it will live. This doesn't apply to individuals, only to groups, to species. The formula is a simple quarter-power exercise: You take the mass of a plant or an animal, and its metabolic rate is equal to its mass taken to the three-fourths power. I'll explain how this works down below, but the point is, this rule seems to govern all life.

A 2007 paper checked 700 different kinds of plants, and almost every time they applied the formula, it correctly predicted lifespan. "This is universal. It cuts across the design of organisms," West says. "It applies to me, all mammals, and the trees sitting out there, even though we're completely different designs."

It's hard to believe that creatures as different as jellyfish and cheetahs, daisies and bats, are governed by the same mathematical logic, but size seems to predict lifespan. The formula seems to be nature's way to preserve larger creatures who need time to grow and prosper, and it not only operates in all living things, but even in the cells of living things. It tells animals for example, that there's a universal limit to life, that though they come in different sizes, they have roughly a billion and a half heart beats; elephant hearts beat slowly, hummingbird hearts beat fast, but when your count is up, you are over. Plants pulse as well, moving nourishment through their veins. They obey the same commands of scale, and when the formula says "you're done," amazingly, the buttercup and the redwood tree obey. Why a specific mathematical formula should govern all of us, I don't completely understand, but when the math says, "it's time," off we go ...

Of course these rules do not tell any particular bee or dog or person when they are going to die. Every individual is subject to accident, caprice, luck. No, this is a general rule. It governs species. Modern humans have managed, because of medicines and hygiene, to become an exception, but 50,000 years ago, we were probably part of the pattern. If you're interested in quarter power scaling, you can check out "Of Mice and Elephants: A Matter of Scale," by George Johnson or go back to an earlier blog post I wrote here. But to summarize, nature goes easy on larger creatures so they don't wear out too quickly. An elephant has trillions more cells than a shrew, and all those cells have to connect and communicate to keep the animal going. In any big creature, animal or plant, there are so many more pathways, moving parts, so much more work to do, the big guys could wear out very quickly. So Geoffrey West and his colleagues found that nature gives larger creatures a gift: more efficient cells. Literally.

The cells in an elephant do more work in a minute than the cells of a mouse. That's why an elephant cell can beat at a slower rate than the rattatat-tat of a mouse cell. Both wear out after a billion and a half beats, but the elephant does it more slowly. As for the peculiar quarter power scaling differences, that rule emerges from the data when you plot the different lifespans of animals or plants on a graph. Notice how plants, big and small fall along the same quarter-power line? Here it is, from a paper by Marba, Duarte and Agusti, cited in my blog post. 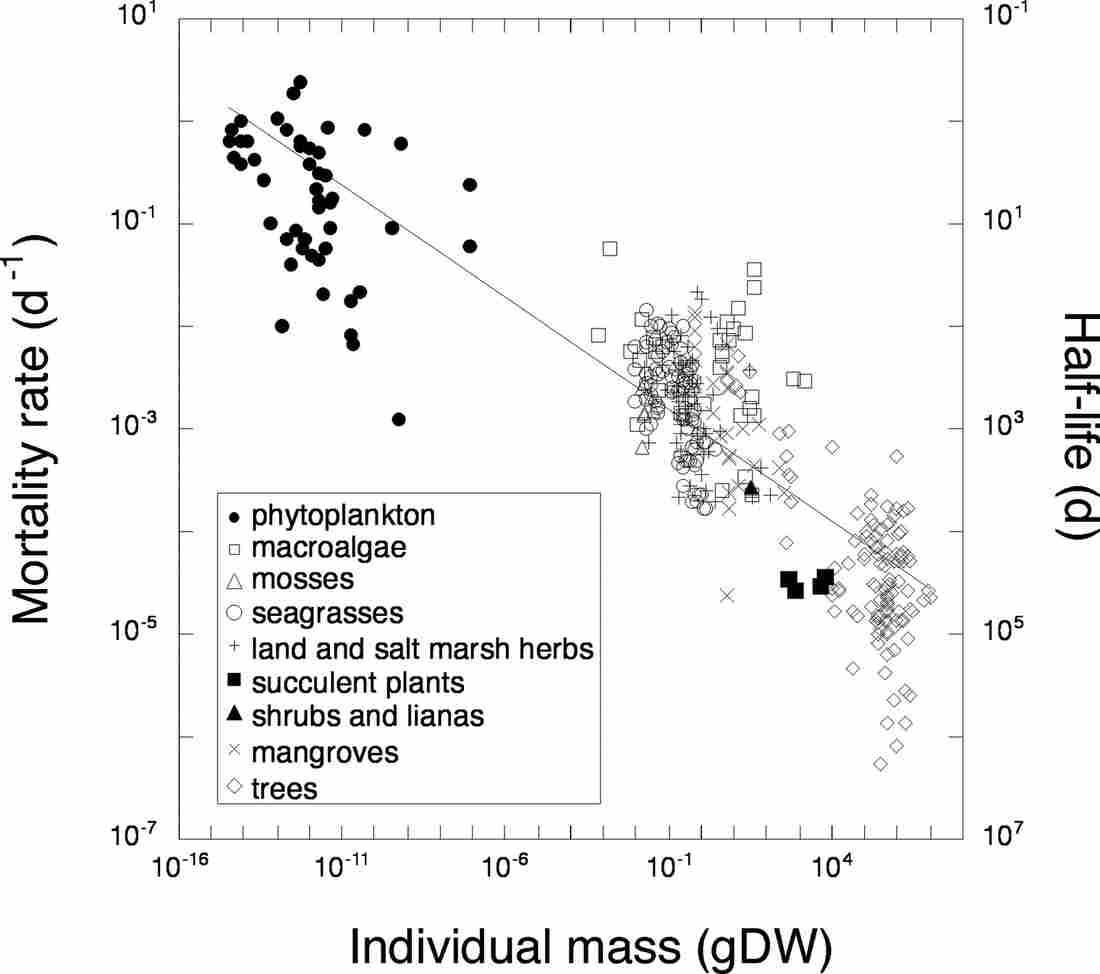 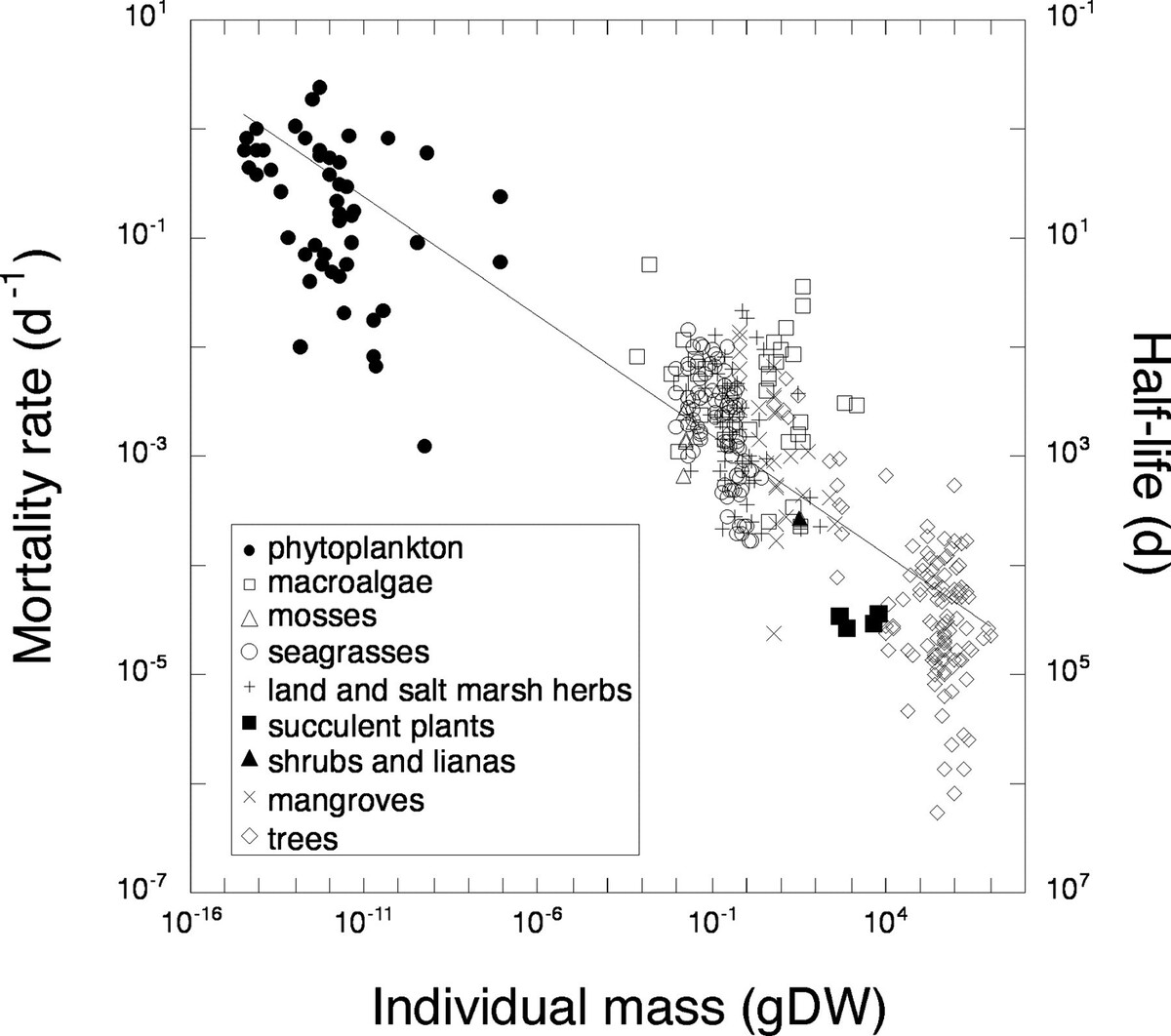 Yunfan Tan is a young Shanghai artist/product designer who calls these short animations "Dancing Leaves." He graduated college last June (DongHua University, Shanghai), went to work for some American ad agencies and is now on the web with something new seven times a week. He calls this project "Make Something Cooool Every Day."

A Postscript From Robert Krulwich

I've been a little surprised by some of the comments posted down below. A bunch of you, mostly scientists, almost always biologists, have suggested that Geoffrey West's ideas, or my version of his ideas, are so simply stated, or based on such flimsy or fudged evidence, that the relationship between size and mortality is not to be trusted.

Many of you admit that size may correlate with lifespan in theory, but in the real world, animals get crushed, eaten, get diseases and size doesn't say anything about that. Others of you think the data is rigged, and animals or plants that don't fit the pattern have been spliced out, or that the size/mortality correlation is too vague to be trusted. "Congratulations," says reader Tom Benton, "You plotted some data points and then ran a regression. I see nothing in this article about its explanatory power."

Well, the "you" being charged here isn't me. I didn't do the correlations, but I did decide to write about them, and chose to treat them with certain respect. And here's why: Yes, West's work is controversial. But it's hardly new. He was inspired by an earlier biologist, Max Kleiber, who worked at the University of California, Davis, in the 1930s, and first noticed that the metabolic rate of a creature is equal to its mass taken to the three-fourths power. So this idea has been around for a long time. It was West and his colleagues at the Santa Fe Institute who in the late 1990s (and others in this century) who mapped it onto real creatures.

Of course, there are many exceptions to their correlation. Many of you point them out. Little birds live longer big dogs; some parrots live longer than lions. When Professor West published his paper in Science, biologists all over the world peppered him with "But what about ... [this animal]?" objections. He called them "quibblers," and told The New York Times Magazine, "There are always going to be people who say, 'What about the crayfish?' ... "Well, what about it? Every fundamental law has exceptions. But you still need the law or else all you have is observations that don't make sense. And that's not science. That's just taking notes."

West is a physicist. Big pictures interest him. Small stories don't. He's not the gentlest of beings when criticized, but science has never been a gentle occupation. It may be that many of you biologists writing in are irritated by an overreaching physicist. But I notice you also aren't crazy about an over-simplifying reporter. If what I have written seems outright wrong, or too sloppy to be credited, I welcome your corrections. I try to read everything that people write in, and when I make an error, I try to correct it. This is, as many of you point out, a blog, not a news column, and I'm here to give people a taste of ideas that excite me, images that fascinate. I am here to share, to tickle, to amaze; not to lecture.

But that said, Professor West's paper on quarter power scaling has been cited by other scientists more than 1,500 times since it was published. By any measure, that's a lot. The New York Times called it one of the most "influential papers in modern biology." So while it may irritate, this idea has weight.