Accessibility links
Pale Blue Blobs Invade, Freeze, Then Vanish : Krulwich Wonders... Just under the iced-over surface of a Canadian lake, white pancake-shaped bubbles stack up in towers. They may look pretty, but they pack an explosive and deadly punch.

It's a lake, yes. But it's also a bomb. Those pale blue blobs, stacked like floating pancakes down at the bottom of this photograph? They're astonishingly beautiful, yes, but they can be dangerous. 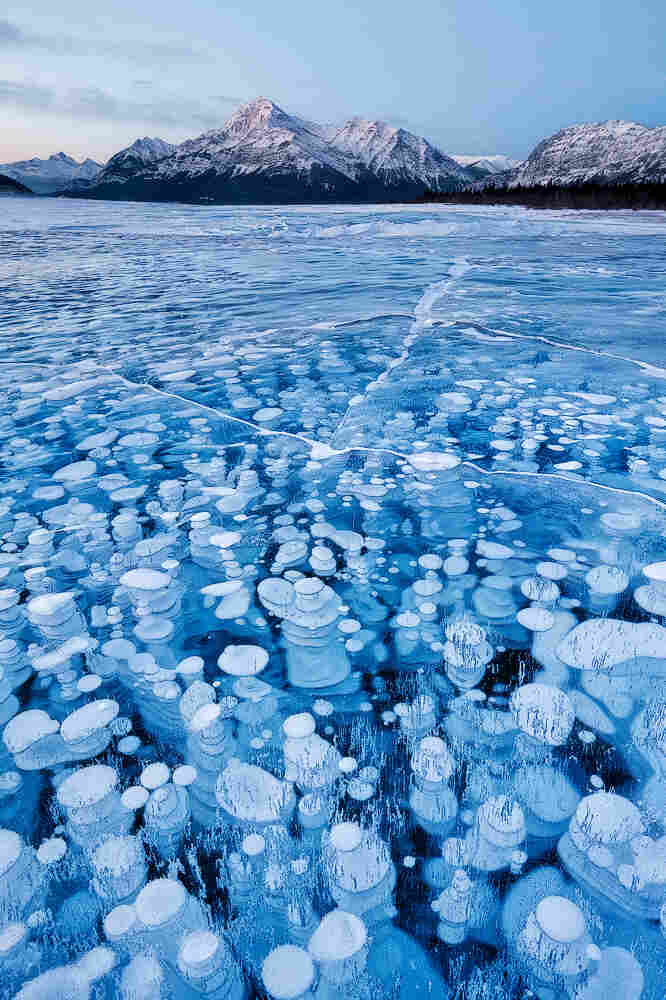 They are gas bubbles, little hiccups of methane that look magical when they're trapped in winter ice, but come the spring, those bubbles will loosen, get free, and like an armada of deep-water flying saucers, they will make their way to the surface. When the ice breaks they will pop and fizz into the air — and disappear.

Except they don't really disappear. Once they hit air, methane bubbles make trouble. How much trouble depends on how many bubbles get released all over the planet. In this one lake, there are thousands, tens of thousands of them, as you can see. But in the oceans, they are bigger — much bigger.

Where Does Methane Come From?

Methane gas comes from leaves (and trees and grass even dead animals) dropping into the water, where they sink to the bottom and get munched on by bacteria that poop out methane, producing that familiar "marsh gas" smell. Some gas is much older, squeezed out of ancient oceans or from deep down near the Earth's mantle. When that older methane rises to the surface and bumps into freezing lake or ocean water, it fuses into a hard white substance called methane hydrate, a white, pasty rock. As long as it's frozen at the lake bottom, the gas is trapped, but when it warms, the gas fizzles out of the rock or mud, forming these lava lamp clumps that float up in six, seven, ten foot columns, like this ...

When those bubbles reach the surface, what happens? Nothing you can see, but when Katey Walter Anthony, an ecology professor at the University of Alaska Fairbanks, takes her students to Alaskan lakes, she pours a little hot water on the ice to melt a hole, then she takes — I think it's a butane lighter, I'm not sure, and in this video you'll see her flicking something, and then ... whoosh! Parents shouldn't look. But it's pretty crazy ...

There are thousands more lakes in Alaska, Canada, Scandinavia and Siberia. Temperatures in the arctic have been warming much faster than temperatures closer to the equator, which means the permafrost below is melting and producing more methane emissions. Methane is a greenhouse gas; when it gets into the atmosphere it captures some of the sunshine bouncing off the Earth, traps that heat and warms us up. Too much methane in the sky means we get warmer, faster — not a good thing.

But bubbly as the lakes are, they may not be our biggest problem.

Look at any one of these flat little lake-trapped pancakes, and now imagine one 3,000 feet wide — more than a half a mile across. Gargantuan methane bubbles do exist. Not in lakes, but in the Arctic Ocean. No one had ever seen them that big, or measured them until a couple of summers ago a Russian researcher Igor Semiletov and his wife Nadia, working with an American team, found more than a hundred of them in a small section of the arctic sea off Siberia.

"These are methane fields on a scale not seen before," he reported. "In a very small area, less than 10,000 square miles, we have counted more than 100 fountains, or torch-like structures, bubbling through the water column." he said. 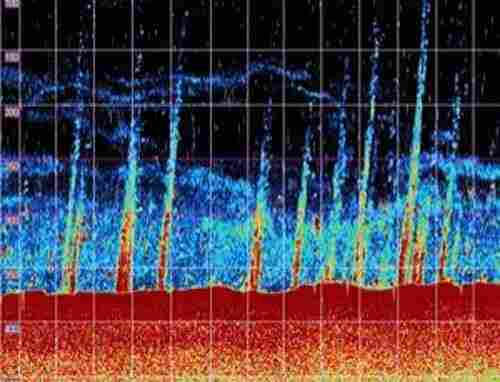 Multiply these findings across the arctic and we've got an obvious problem. If all that extra methane keeps escaping, it will extra-warm the air, which will extra-warm the oceans, which will extra-melt the sea beds, which will extra-release more methane, which will warm the air even more, and then we're in a pickle. But since we've only recently found these oversized ocean plumes we don't know if they're really extra bubbles — or ordinary. Are they a global warming phenomenon? Or have they been burping for thousands of years? Natalai Shakhova, a scientist at the University of Alaska's International Arctic Research Center, thinks they may be new, or newish.

"The concentration of atmospheric methane," she told The [London] Independent, "increased up to three times in the past two centuries from 0.7 parts per million to 1.7 ppm, and in the Arctic to 1.9 ppm. That's a huge increase, between two and three times, and this has never happened in the history of the planet," she says. Scientist Igor Dmitrenko, seconded by New York Times blogger Andy Revkin, aren't so sure. The evidence, they say, suggests these bubbles have been around for 6,000 years. Nobody really knows.

So, yes, we've got something new to worry about. Methane doesn't stay in the sky as long as CO2, but when it up there, it's a potent greenhouse gas. (It's also a cleaner, cheaper fuel than coal, so it has its fans — not to mention its extraordinary beauty when frozen).

No pollutant has ever looked so lovely. If I were a gorgeous lump of coal, a glistening oil drop, or a classy lump of tar, one glance of Emmanuel Coupe Kalomiris' gorgeous photos and I'd hide under my pillow. Methane's scary, but when it's frozen — it's so hot.

I asked photographer Emmanuel Coupe Kalomiris (who generously lent us his bubble pictures) what it was like to go to Lake Abraham in Alberta. He says it's very dry there, it hardly ever snows — that's why he got such clear shots of the lake water. He used crampons to keep from falling. "It is very slippery, as you can imagine," he wrote me, and ice thickness varies. In most places the ice was 2, 4, even 10 inches thick, but there were also cracks and fissures and you don't want to get too close to those. Photographers from all over go to Lake Abraham to shoot the bubbles and a bunch of their best pictures — Coupe's included — are collected here.