Accessibility links
Irresistible Meets Unstoppable. Who Wins? : Krulwich Wonders... I know you've wondered: What would happen if an irresistible object is launched at an immovable object? Who wins? What happens? Well, here's the answer. It's not what you'd expect.

It's such a tantalizing question: What if an irresistible object crashes into an immovable object, what happens? Would the unmovable move? Would the irresistible be resisted? Which one would prevail? Somebody must have thought about this, must have an answer. 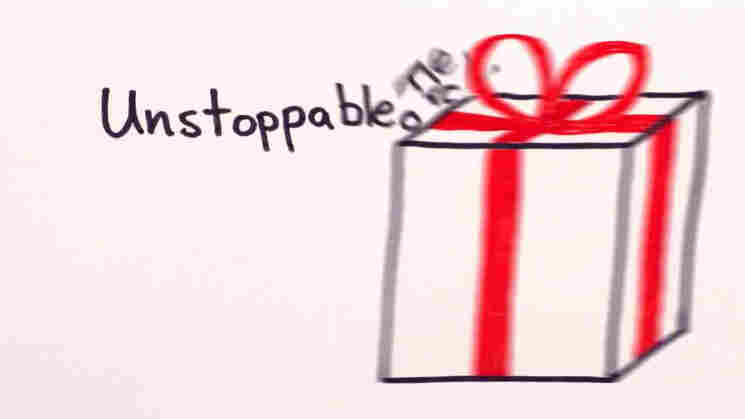 Well, someone has. It's Henry Reich, who's been writing/narrating/drawing Minute Physics videos at the Perimeter Institute For Theoretical Physics in Waterloo, Canada, and attracting enormous crowds because his short animated explanations really do explain. In this one, Henry introduces us, with a few careful amendments, to something that Won't Be Moved, then to Something That Won't Stop Moving. They are set on collision course and we get to watch, step by step, what happens. You'll want to stay to the finish, because the end is like nothing I'd imagined.

There may be a few equations that fly over your head, but the drawings are so intuitive, so quietly compelling, I was able to follow the action all the way through.

Stop. Don't read this until you've watched the video...

About the last bit? Frankly, once we kicked gravity out of our equations, and got those two infinitely massive unacceleratable gift boxes heading for each other, I was expecting a crash — a big, universe-ripping crash. But when Henry pulls out a dictionary and reveals a law of nature I'd never heard of — all of a sudden those "infinitely massive" gift boxes become a pair of friendly ghosts, of the Casper variety, that can't be bumped into. I was, I confess, a little disappointed. It's like going to see two heavyweights of the Ali or Frazier class, and finding them weirdly transformed into lightweights — too light to land or take a punch. I'm not sure how to react. Should I ask for my money back, or should I think the universe is just wonderfully weird?