Accessibility links
Dinosaurs With Attitude : Krulwich Wonders... Spielberg's were big, green and scaly. The real ones? They were often rosy, yellow, orange, iridescent, covered with fuzz, plumes, or feathers. Take a look at this latest take on the Jurassic, when reptiles, we think, looked more like rainbows.

Come on, this isn't serious, is it? There was an animal that looked like this? 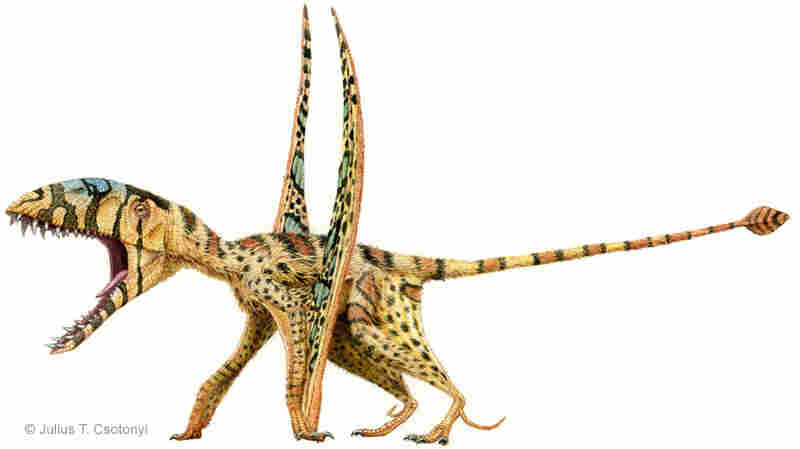 It's a dinosaur — scaly, fuzzy, with an oversized zebra-striped head, leopard-spotted legs, tiger stripes on the tail and two unfoldable wings permanently erect and attached to its feet. Really?

Yes, this is a real animal. It doesn't look like a Spielberg green scaly dinosaur, but over the last decade scientists, using new molecular imaging techniques, have decided that some of these Jurassic critters were far dandier than previously imagined.

This one, called Dimorphodon macronyx, was found wedged in a British limestone cliff by a fossil hunter named Mary Anning back in 1828. It was pretty weird back then, being a four-legged, walking, winged pterosaur, but if the latest theories on color and feathers hold true, this animal was a clash of stripes, dots, feather and fuzz. 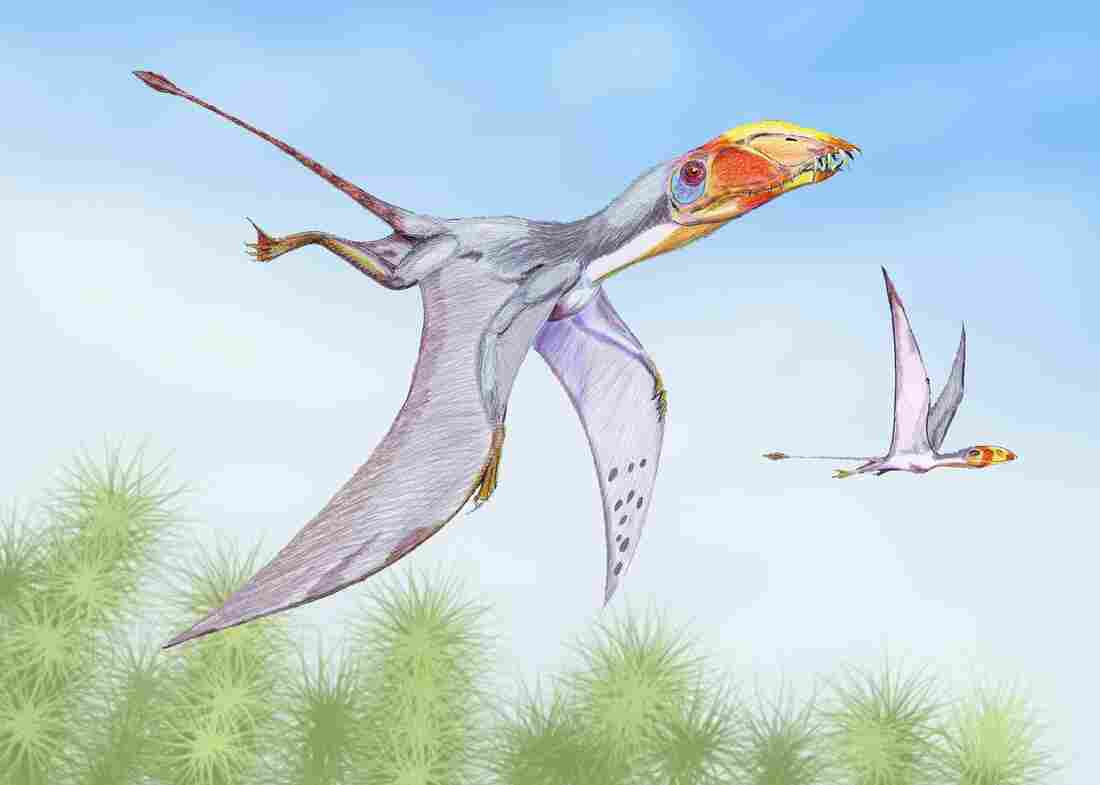 Feathers on dinosaurs aren't new. A feathery fossil turned up in Germany in 1861, but more recently, more sophisticated instruments can magnify surface details that appear to have once supported primitive feathers, like the mohawk you see coming off this animal's spine. 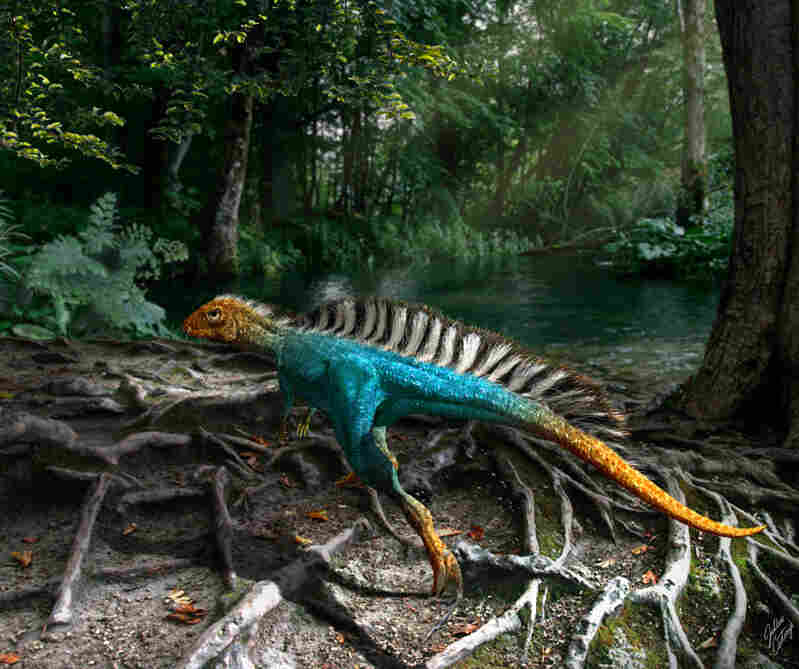 This little dinosaur, about the size of a cat, was found by Xiao-Ting Zheng's team in China. It's called Tianyulong confuciusi, and it had a ridge, Zheng says, of stiff hollow stalks, primitive feathers, also known as "dinofuzz." Feathers, apparently, evolved from flat scales, the scales you can see today on modern snakes. How did that happen? Well, it took time, genetic changes and evolution, but you can the process unfold even today, writes science reporter (and Radiolab regular) Carl Zimmer. Just check out baby birds (who descend from a branch of dinosaurs):

All the feathers on a developing chick begin as bristles rising up from the skin; only later to their split open into more complex shapes. In a bird embryo, these bristles erupt from tiny patches of skin ...

So scales begat fuzz, and fuzz begat dino-fuzz, and dino-fuzz begat feathers, and the world begat feathery dinosaurs. Some used feathers to keep their balance when holding down struggling prey, like this guy ... 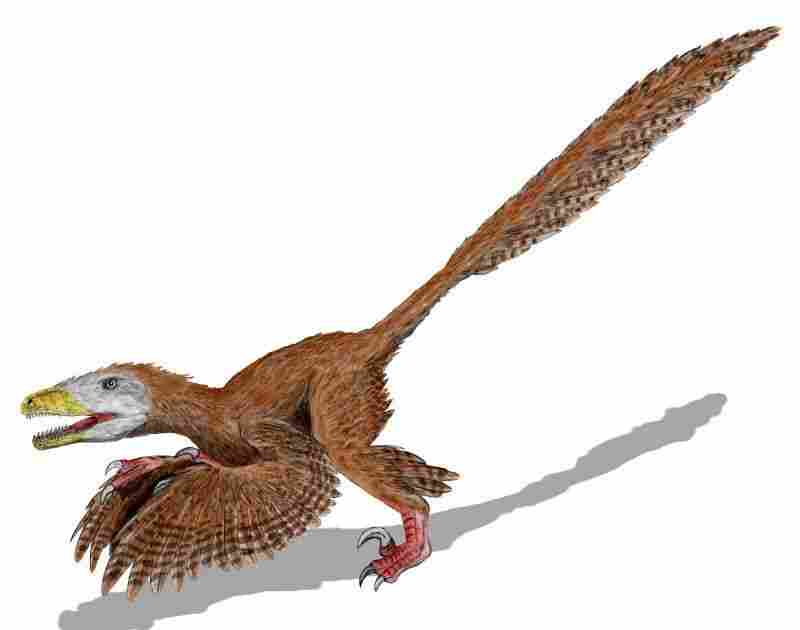 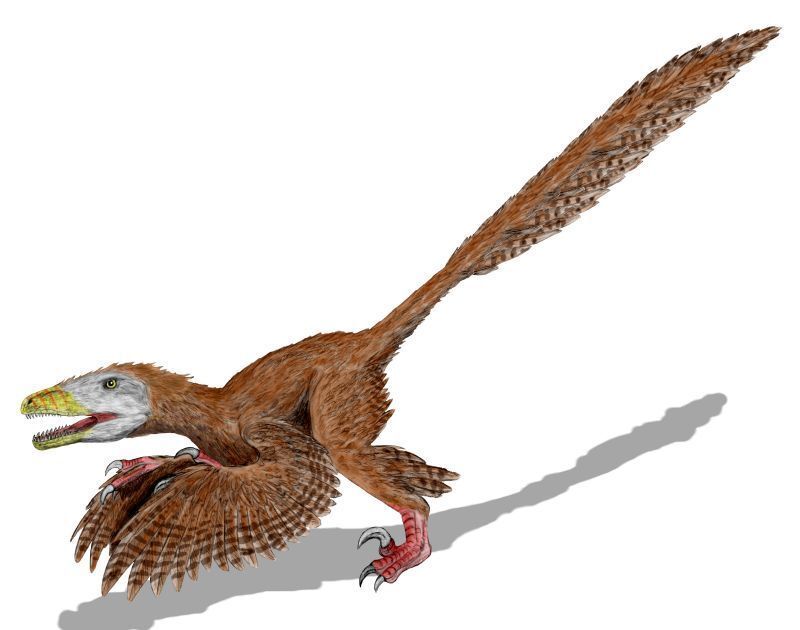 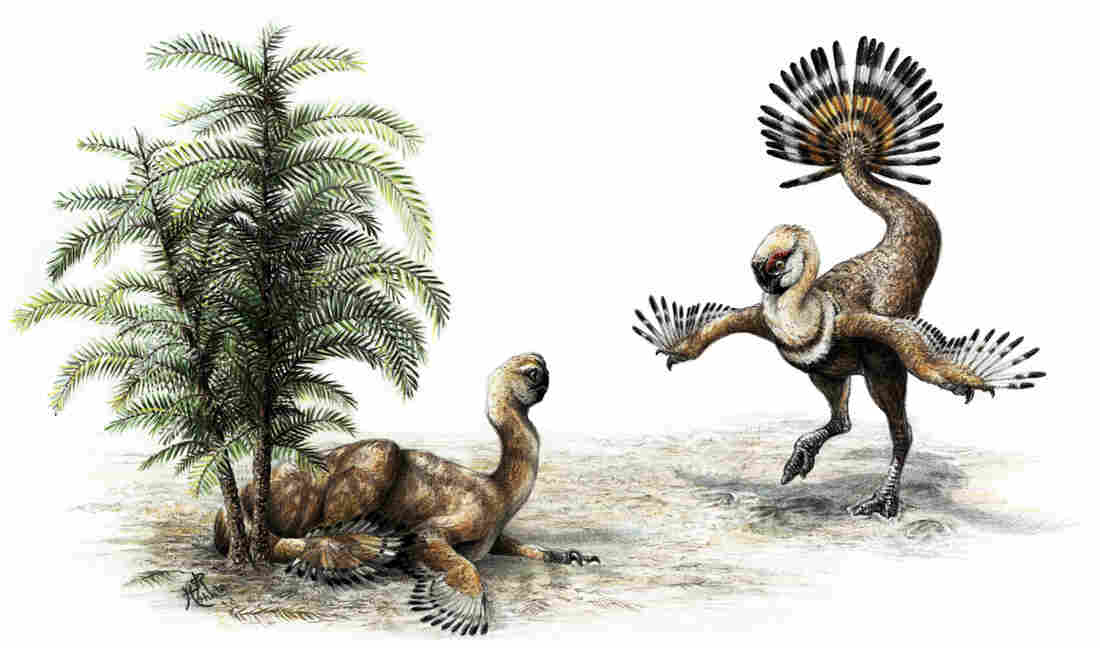 Courtesy of Sydney Mohr/University of Alberta

Well, modern feathers get color from the shape and placement of teeny, pin-sized sacs of pigment. When scientists looked, they found similar structures, called melanosomes, in dinosaur feathers. Melanosomes, it turns out, can survive for millions of years in fossilized bird feathers, which gave two scientists at Yale an idea. "We had a dream, to put colors on a dinosaur," grad student Jakob Vinther told The New York Times.

Working with Dr. Richard Prum, Vinther harvested a bunch of melanosomes from a fossil and sent them to Akron, Ohio.

Bring Me Your Purples, Your Yellows, Your Flaming Reds ...

There's a biologist in Akron, Matthew Shawkey, who knows how to read colors in modern bird feathers. He can look at an array of modern melanosomes and say "this feather is going to be brilliant yellow with touches of blue" and most of the time he's right. Well, if he can do that for modern feathers, why not dinosaur feathers?

And so, thanks to Prum, Vinther and Shawkey, we now have a method for imagining the colors on vanished dinosaurs , including, my new, iridescent, many-colored favorite, the Dancing Gigantoraptor. This is my guy. I found him on YouTube, from the Discovery Channel. 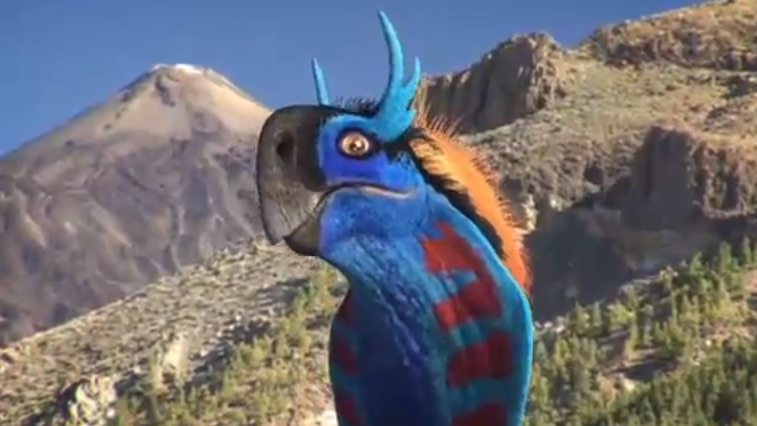 He's a big dinosaur, who in this video is trying to impress a lady by displaying his super flashy iridescent tail, his rainbow colored wings and by leaping high in the air. Unfortunately a bunch of mammals — our great, great, great, great grandparents — have created a soft spot on the ground below, so he's going to have an inconvenient accident. But if you wanted to gaze at the newest look in dinosaurs, here it is ...

Special thanks to artist Julius Csotonyi for his version of the Dimorphodon and the Tianyulong. Julius' site is chock-full of extraordinary paintings, drawings, and mixed media depictions of the ancient earth, and he stays very current on the science. Thanks too to my backfield of dinosaur informants, Brian Switek at Laelaps, Ed Yong at Not Exactly Rocket Science and Carl Zimmer at The Loom. Brian's the one who led me to the Gigantoraptor.