Accessibility links
Yes, Cats Know How To Fall On Their Feet. But These Guys Do It Better : Krulwich Wonders... Drop a cat from a bed, a chair or a tree, and it will do its wriggly thing and land on all four feet. Cats are famous for this. But we've discovered an animal that does it better. Meet the new champ.

Yes, Cats Know How To Fall On Their Feet. But These Guys Do It Better

Yes, Cats Know How To Fall On Their Feet. But These Guys Do It Better

The champ has met its challenger.

Drop a cat and it will swing its head to a horizontal, rearrange its rear, arch its back, splay its legs, and — amazingly often — land on its feet.

This is what cats do. They're famous for it. But now they have a rival.

This is an aphid. 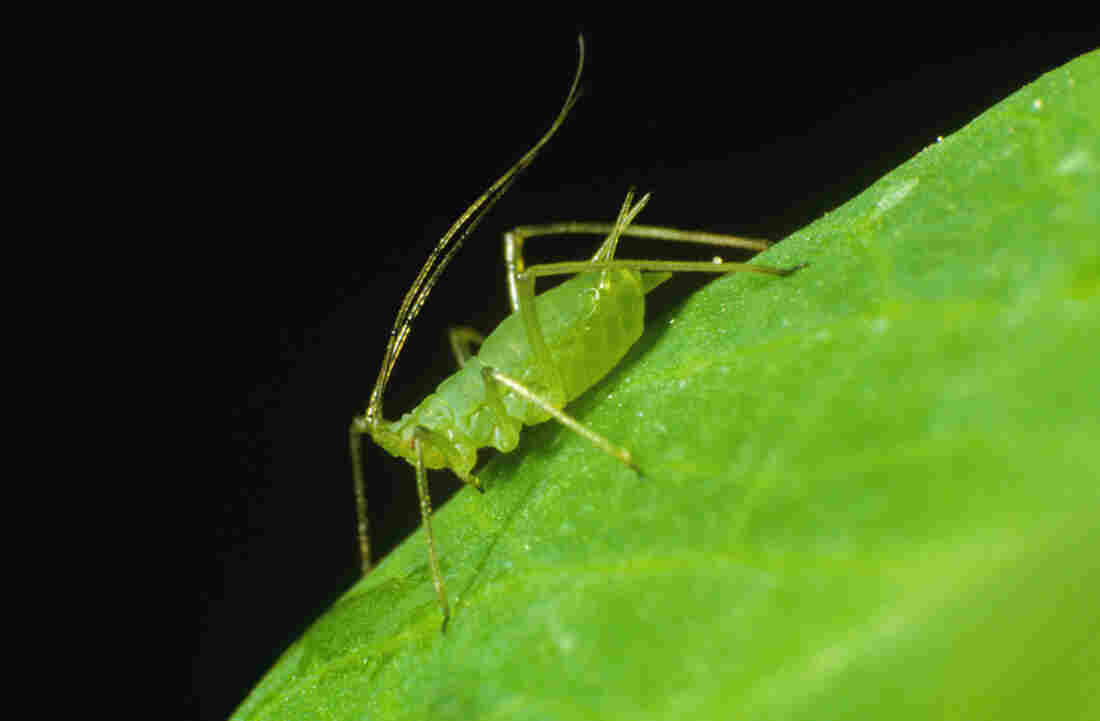 Aphids spend their days sucking sap from leaves. Those leaves can be high off the ground. "High" of course, being a relative term, but think of it this way: Five feet high up is 381 aphids tall. Which is why things get so dicey when a ladybug comes by.

Ladybugs eat aphids, or try to, and when one approaches, an aphid has no choice. It can't stay on the leaf; that's a death sentence. It can't fly away. Usually, it has no wings. All it can do is tumble off the leaf into a freefall. Which is what it does. And the astonishing thing, say scientists Gal Ribak, Moshe Gish, Daniel Weihs and Moshe Inbar is that while the falling aphid is very often topsy-turvy, 95 percent of the time, a falling aphid won't land on its head, or its back, or sideways. Aphids, like cats, land on their feet, like this:

They're incredibly good at it. This animation appears in Current Biology; it was produced by scientists at Israel's Technion and the University of Haifa. It describes the typical descent of a falling aphid. "What puzzled us was that the aphids did not seem to do much in order to right themselves," Gal Ribak said. "Their body posture remained fairly constant during the entire fall." So how come they always land on their feet?

Spherical Is Safer, Said The Aphid To The Cat

It's an achievement that should make cats envious. Aphids, after all, are much, much smaller than cats, so they plummet proportionally much more dramatic distances and yet seem uncannily able to survive their falls.

Obviously, body shape has a lot to do with it. An aphid looks like a lopsided sphere — much more so than a cat — and almost every time aphids fall, whether they start heads down or heads up, they will rotate into a horizontal position. It seems built in. But shape isn't everything. Give these aphids a little credit, say the scientists. Let's review the animation.

Notice at the top of the fall, the aphid is heads up, bottom down, dropping in a vertical. Its underbelly is on the left. If it landed now, it would squish its rear ... 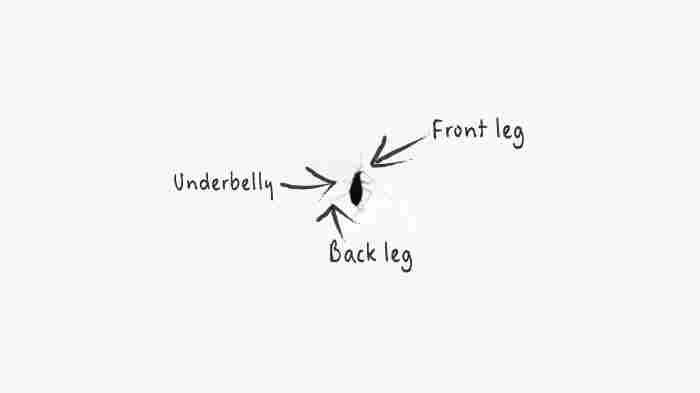 Now we're a quarter of the way down, and the aphid is beginning rotate, so its underside is starting to line up with the ground below. Meantime, look to the left, and see it's got a forelimb extended, in a sort of "Superman" posture, limb thrust forward. It's about to freeze into position, like this ... 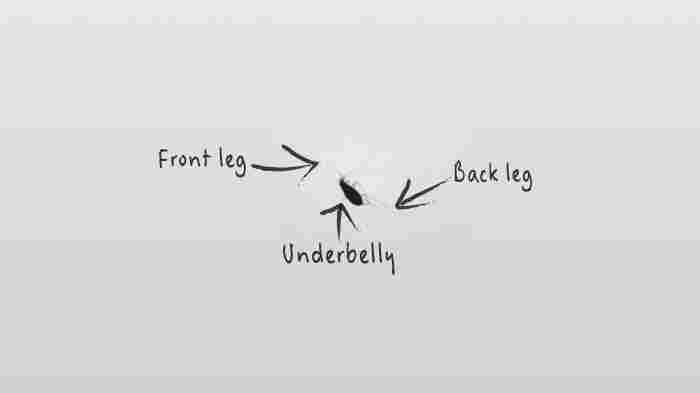 At the halfway point, the aphid is still turning, its body rotating into a horizontal; it's keeping that forelimb stiff. Its "hind tibiae," those two rear leg-like extensions, are moving back along its topside. 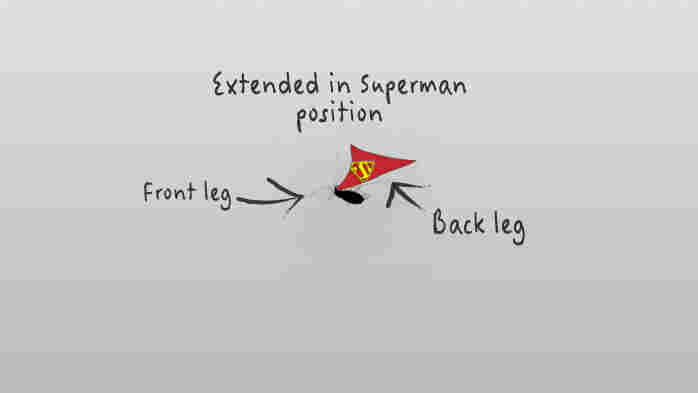 As we approach the ground, the aphid is now like a descending helicopter, holding its position, it takes its "Superman" forelimb, bends it into a landing device so its legs are ready to hit first and spread the shock through the whole animal ... 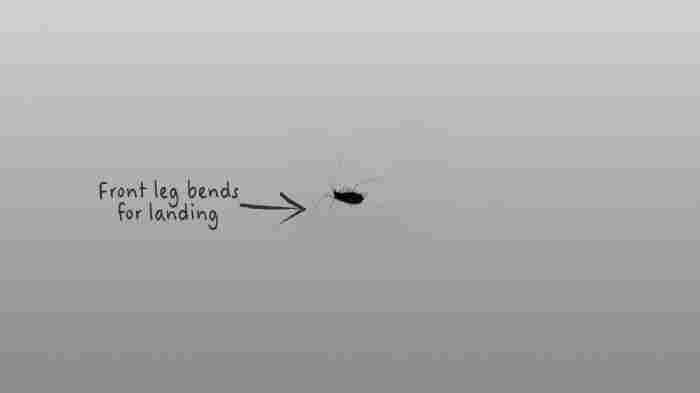 And that's how it lands, legs first, "just like a defenestrated cat" (that's a cat that jumped out a window), say the authors.

How do aphids do it right 95 percent of the time? Is it simply because they've got these spherical torsos? Are they natural parachutes?

No. Because when the scientists took tweezers and dropped dead aphids, about half landed cockeyed, on their heads or backs. Living aphids, however, fell like professional trapeze artists, so it takes some living aphid-action, willful or reflexive, to achieve this level of performance.

Probably, as with cats, this happens automatically. The formula — you leap, you fall, you stretch, you freeze, you rotate, you land — was discovered using high speed photography and mathematical modeling. "I was surprised and impressed by the simplicity of the right mechanism," said scientist Gal Ribak. For aphids it's no big thing.

For scientists, it's pure elegance.

If you want to see Ribak & Co.'s paper, it's here, and it includes a few videos. Elizabeth Preston, over at Inkfish, did a nice job describing the various trials (including some aphid amputations), so if you want a fuller account, you can find her story here.