Accessibility links
Close Your Eyes And Imagine A Protein. See Anything? A Housefly, Maybe? : Krulwich Wonders... If DNA molecules are the Marilyn Monroes of biochemistry — everybody knows what DNA looks like — what about proteins? Why do most people have no idea what a protein looks like? Well, maybe this will help: proteins that look like houseflies, Bedouins, bumblebees and a pair that look uncannily like Moses and the Burning Bush.

Close Your Eyes And Imagine A Protein. See Anything? A Housefly, Maybe?

Close Your Eyes And Imagine A Protein. See Anything? A Housefly, Maybe? 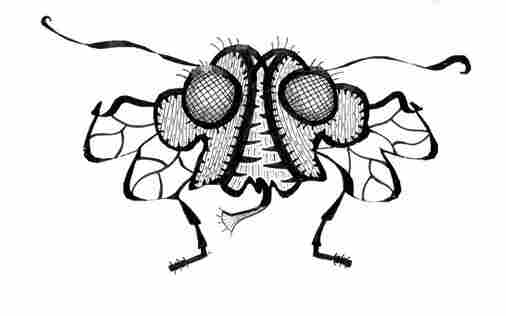 Pay no attention to this housefly. We'll get to it later, but first, how about a "Do You Recognize This?" quiz.

If I say "DNA," what do you see? Well, instantly, you see one of these: 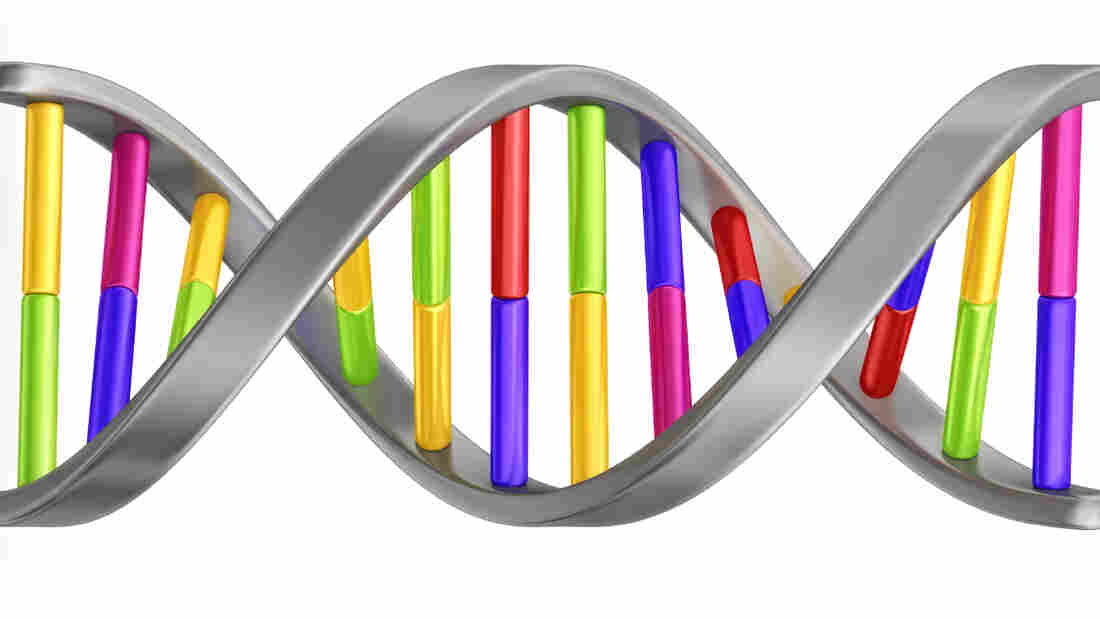 But what if I say "protein"? What comes to mind? Anything?

Well, for many people, "protein" is what you find on a plate ... 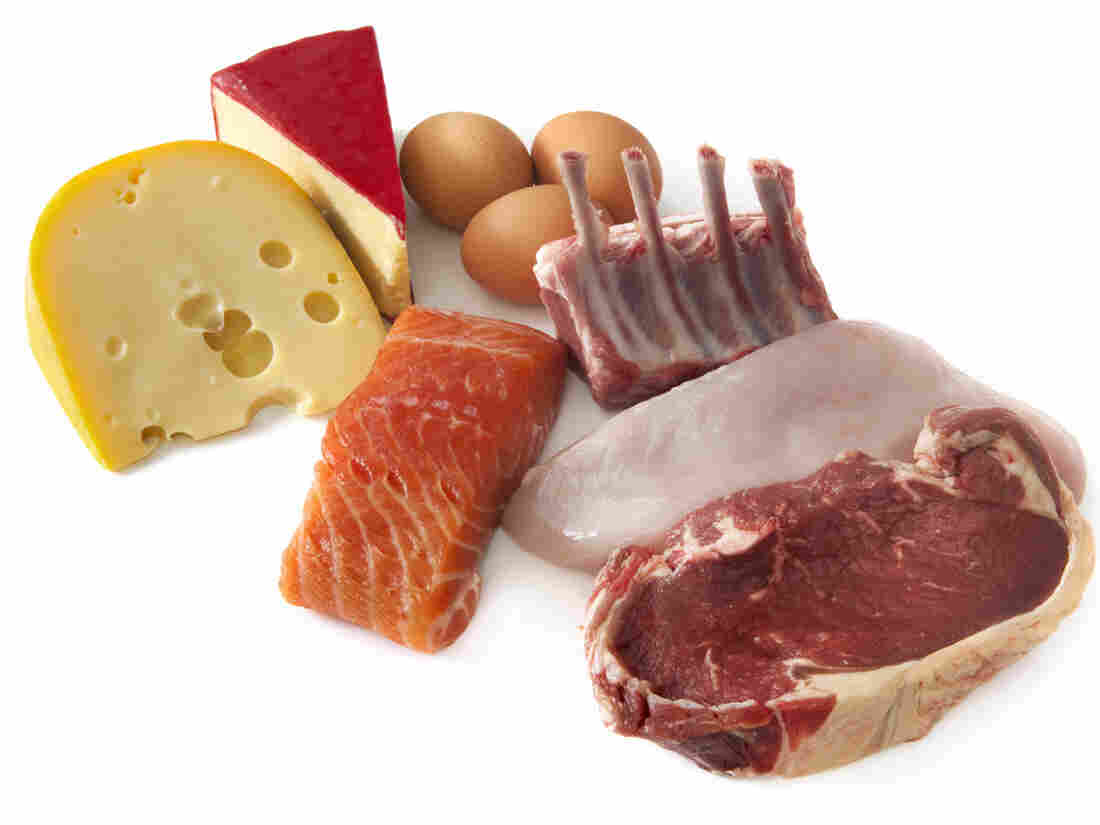 But if you are summoning up a science-y image, what would it be? You know proteins are small, microscopically small. You may not know how important they are, but they are — very. They make all living things grow, repair, operate. Deep down, in your cells, they are the workers that move things around, that build, destroy, copy, attach, react — they are absolutely essential, and yet if you put one on the cover of Time Magazine, most people would say, "What's that?"

They have no "face," no image that ordinary people recognize. But as they become more newsy — Alzheimer's, Parkinson's, type-2 diabetes are all caused by defective proteins — you will be seeing them on front pages, TV, magazine covers. Proteins are about to get much more famous.

Which raises the question: What should they look like?

In real life, they are large, very complicated molecules. Science reporters (and scientists too) need an edited, media-friendly version that will give the public a sense of what proteins do.

But they do so many things. There are many ways to picture a protein. Sir John Kendrew, in Britain, tried building a 3-D model, but it was ridiculously complex and too, too big. It took months to build ... 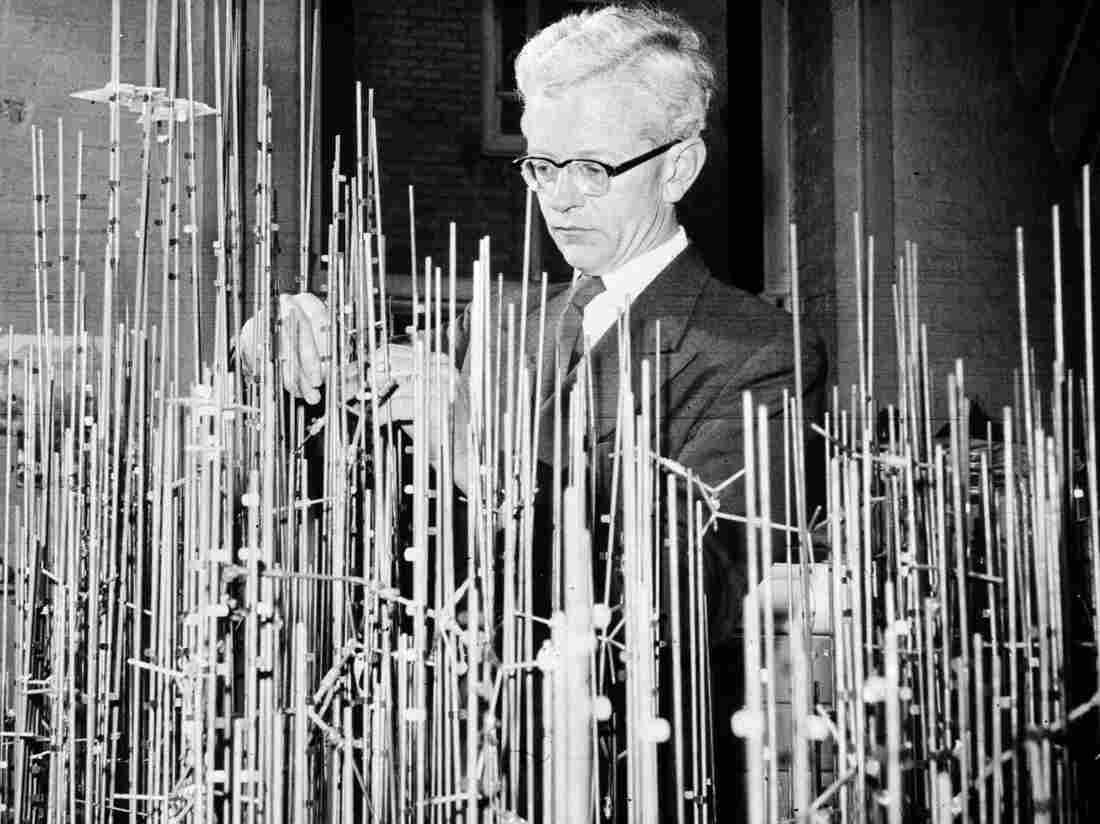 Enlarge this image
Courtesy of MRC Laboratory of Molecular Biology 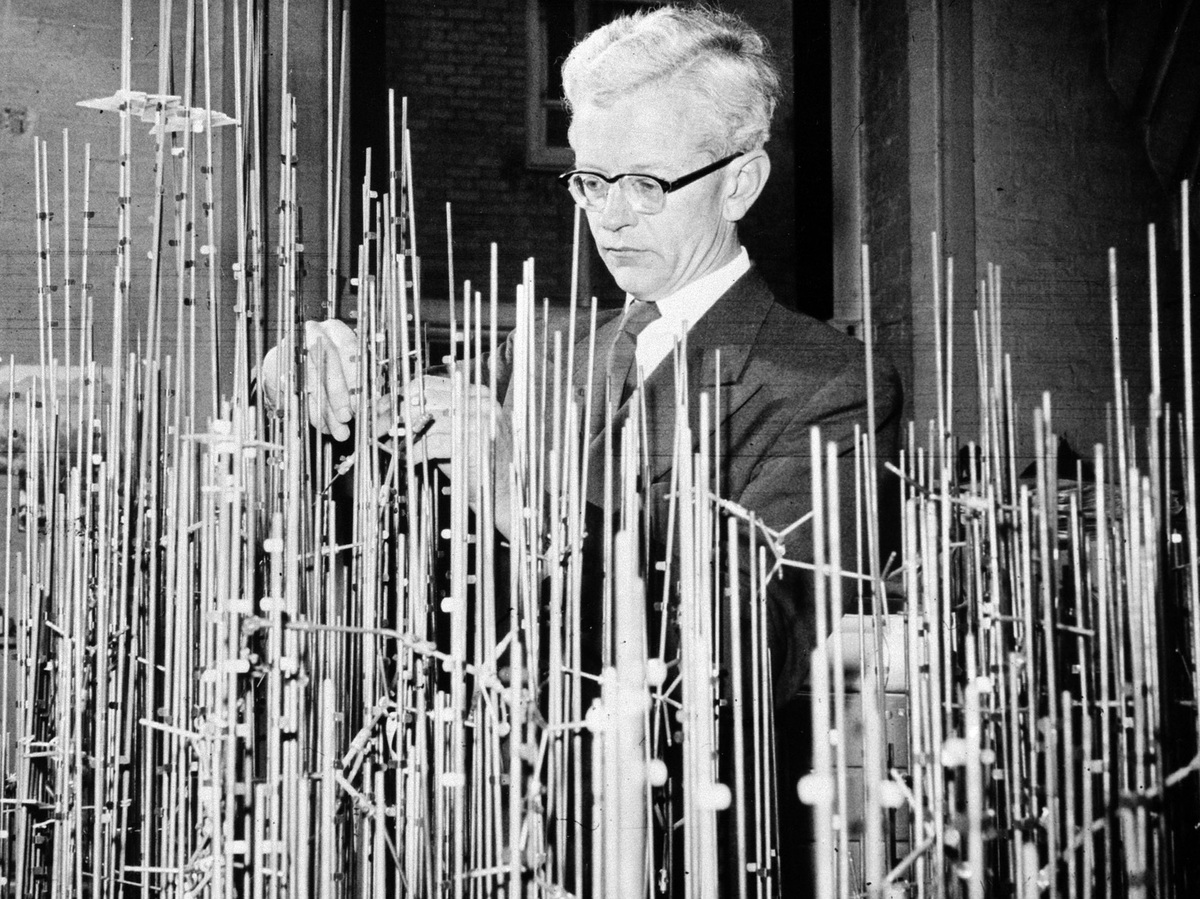 Proteins are chemicals (amino acids) arranged in zigzaggy chains — something like this ... 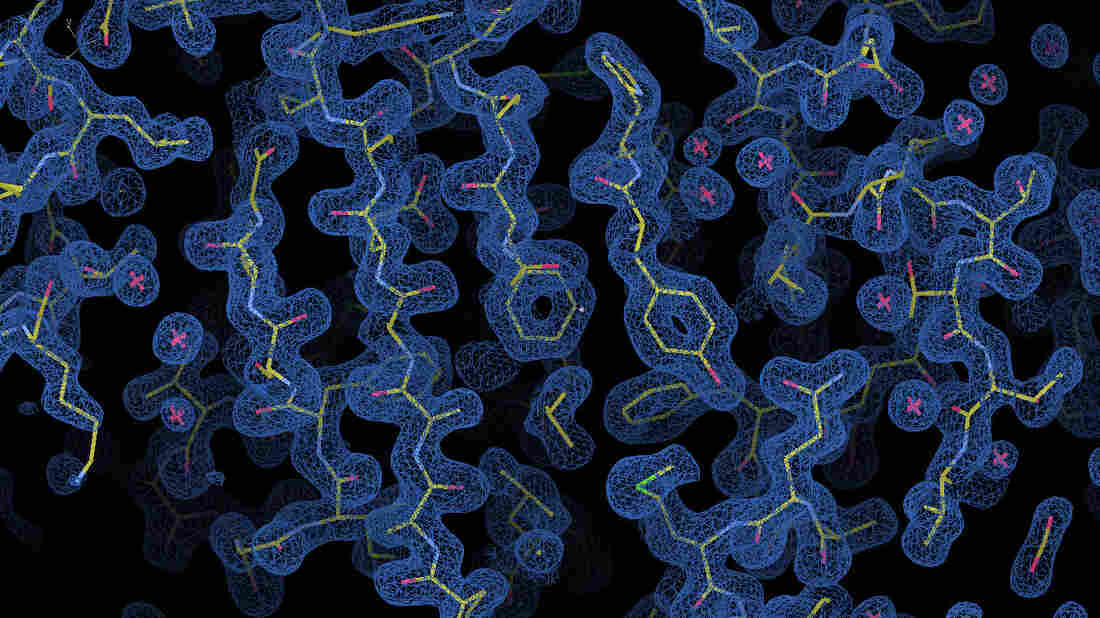 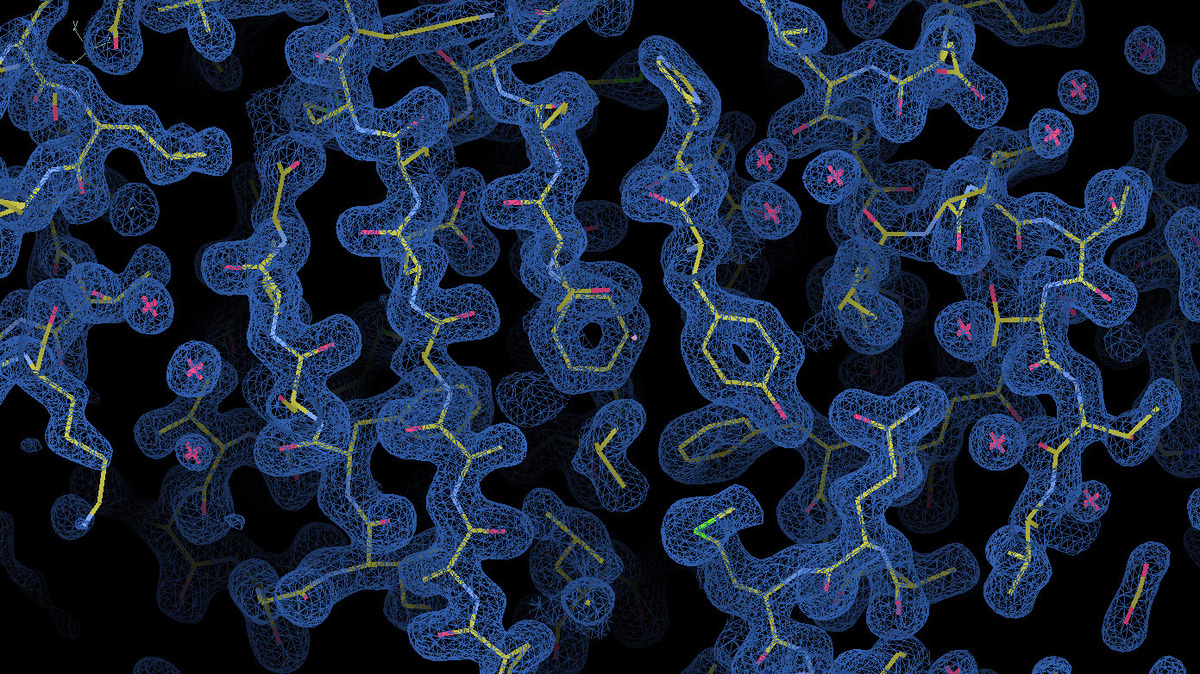 Or seen from the outside, they'd look like a clump of connected Styrofoam packing peanuts ... 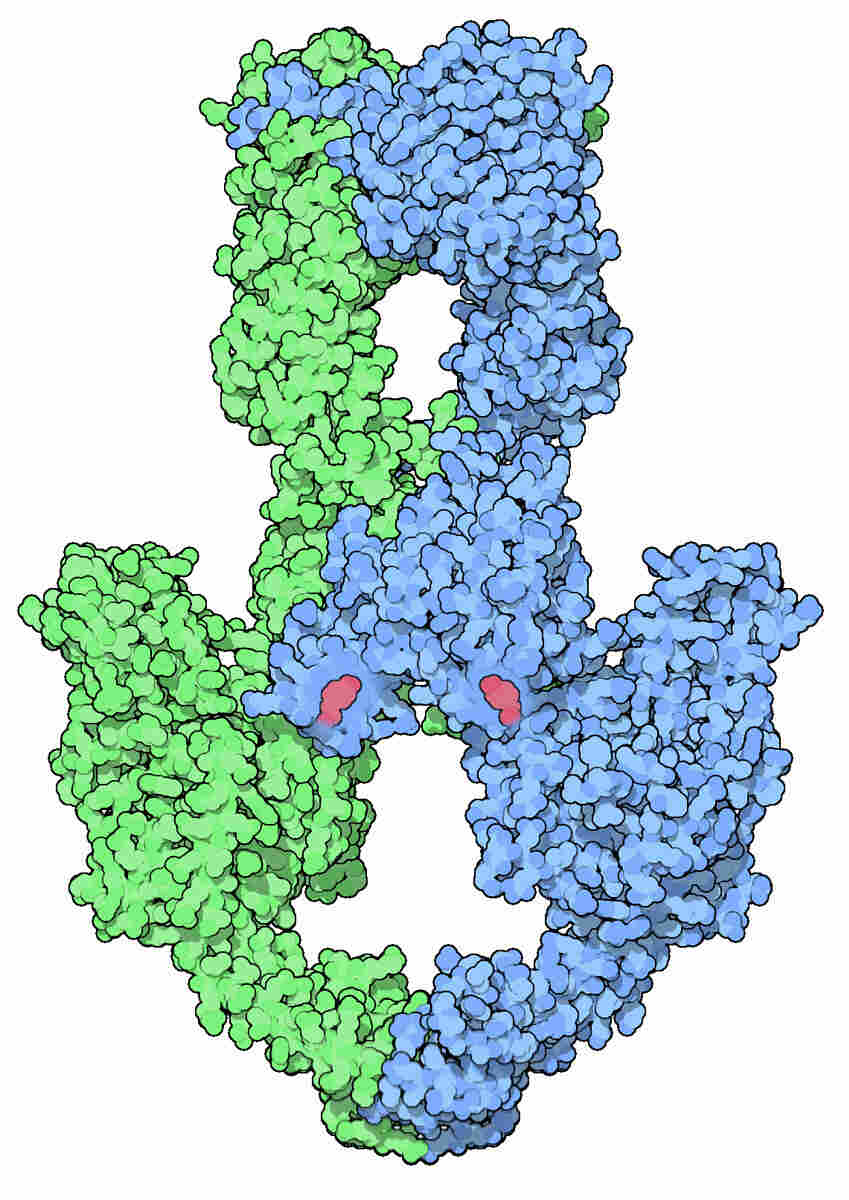 But none of these images really gets it right, captures their essence — which is they have a shape, but they can twist, fold and unfold when they have to.

Which brings us to Jane Shelby Richardson. In 1980, Jane's husband David got a job in the biochemistry department at Duke. Jane, also a biochemist, couldn't get a job there because Duke had a "nepotism" rule; no spouses could work in the same department. So she was given a lesser position in Anatomy, and since she had the time, she got interested in drawing proteins. 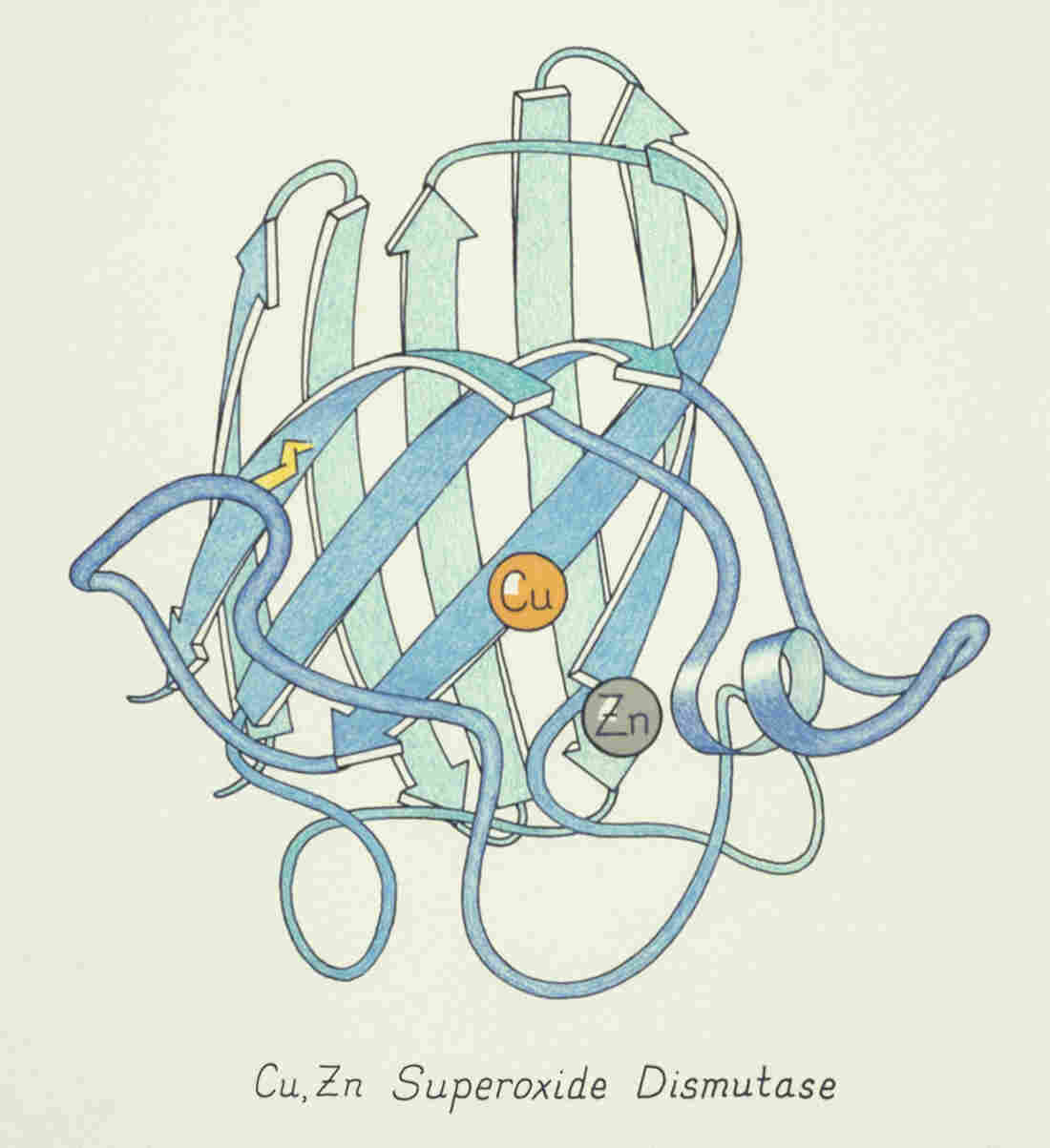 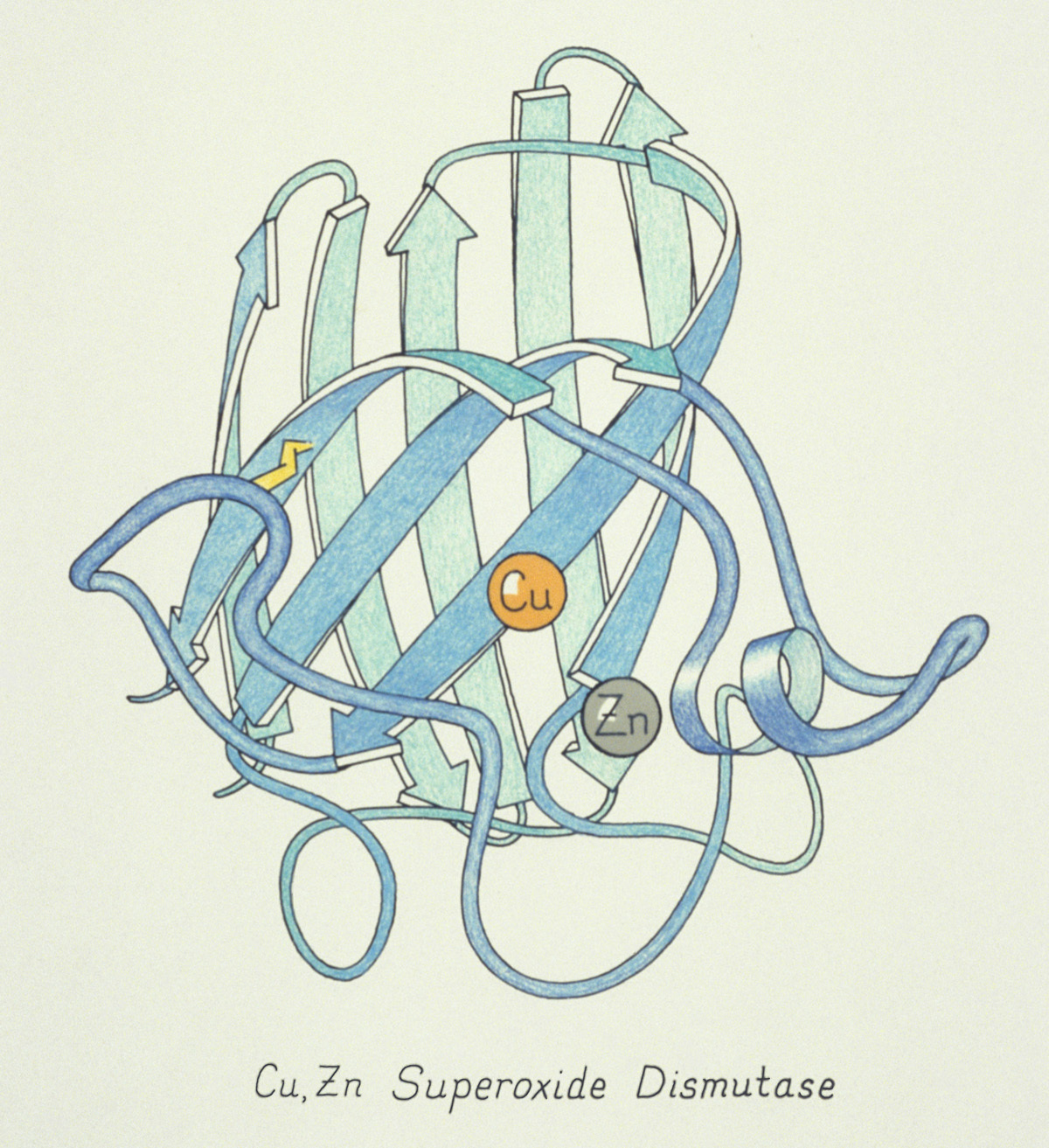 It looks like something you'd find on the floor after a New Year's Eve party. Sort of ribbony, with arrows and bits of shoelace — but to protein scientists, it was a breakthrough — a big fat "Hooray!" She'd drawn what they'd been waiting for, eliminating atoms and emphasizing the shape, the parts that fold, bend and hold the thing together. Very quickly her "ribbon diagrams" became everybody's favorite way of representing proteins.

Her drawings appeared on the covers of scholarly journals; she got a promotion at Duke, then tenure; her design coordinates are now computer programs, so if someone discovers a new protein and wants to show it to the world, you enter the data, and ZIP! Out comes a "ribbon diagram."

They are everywhere and your children and your children's children will see so many of these things in the next 50 years, they will know right away, "that's a protein!" But since we're not quite there yet, here's a joyous way to get used to them.

Maja Klevanski is a grad student at Heidelberg University in Germany. She spends a lot of time thinking about proteins because she is studying Alzheimer's disease, and on her blog Protein Art she doesn't just display ribbon diagrams, she fantasizes about them.

Here, for example, is the ribbon diagram for insulin that moves sugar from your bloodstream into your cells. 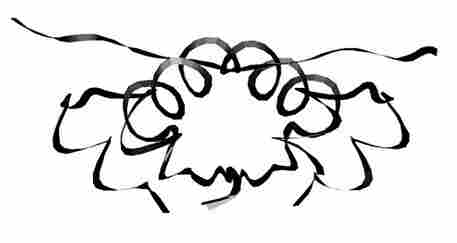 But when Maja looked at insulin, instead of a hormone, she saw a housefly. And why not? Look back at the ribbon version and try to erase the housefly. It won't leave. 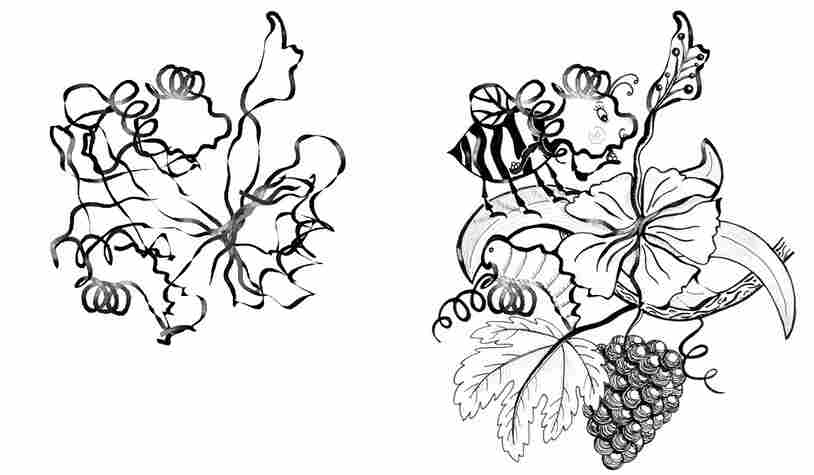 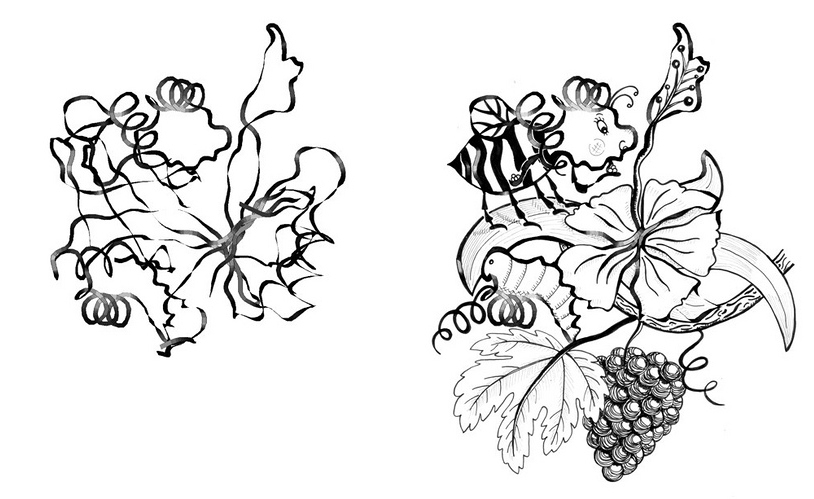 This next one (Lipoate-Protein Ligase A) seems to be in the attaching/connecting business, but to Maja it's a Pashtun man from Pakistan or Afghanistan wearing a "Pakul," a traditional hat. 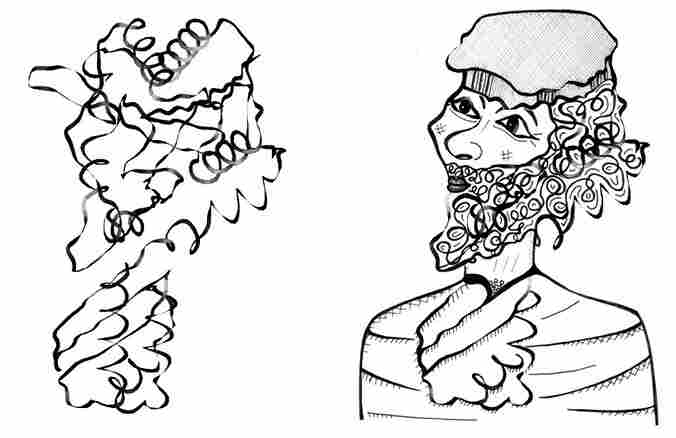 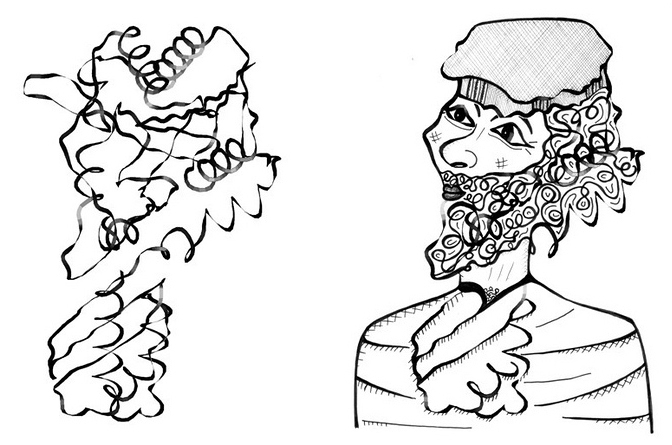 Maja's getting loose here, because this is not one, but two proteins: ribosomal protein L11 methyltranferase on the left and a different ribosomal L11 on the right, but together they become the bible story about Moses seeing the burning bush ... 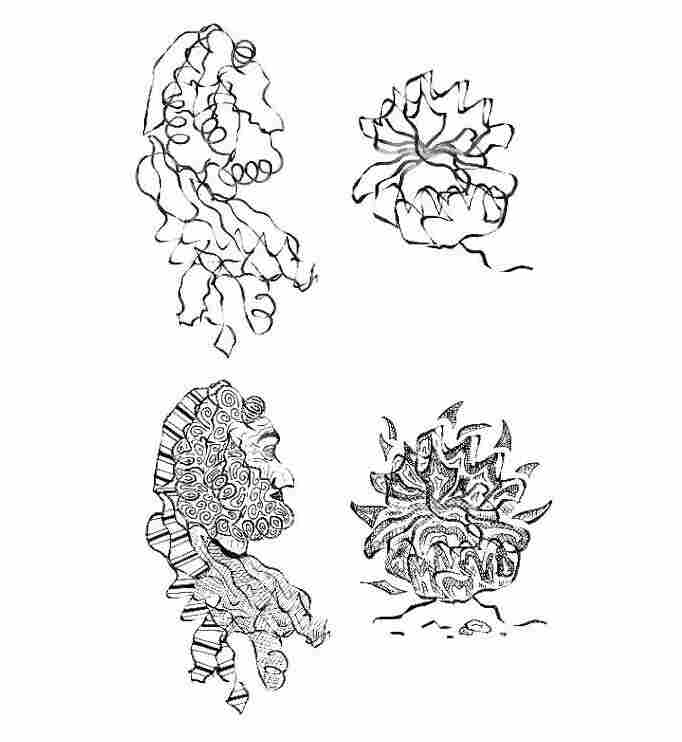 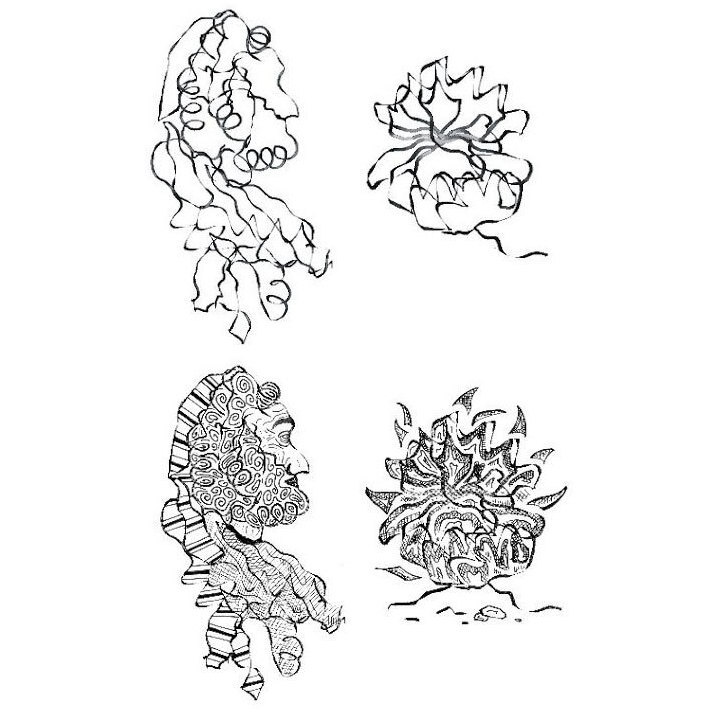 And finally, since we're already on the desert, here's a protein called a nanobody; like its larger cousin, the antibody, it fights invading pathogens, and says Maja, this one was actually found in a camel! Which is why she calls it "Bedouin Riding a Camel" ...

Maja's website has many, many more of these; keep looking at them and soon you will be seeing proteins everywhere. Which makes sense, because in their very tiny way, they are everywhere.