Accessibility links
What's That Thing Hanging Outside My Bathroom Window? My Neighbor's Drone : Krulwich Wonders... Here's something new, exciting and just a little bit troubling: it's a little robot that you can fly with your phone. It's easy. It's versatile. It's got cameras so you can see and record what's going on in the apartments above you, the houses on your block, in backyards, sports fields. Nice, yes. But what happens to privacy if these things become very popular?

"Holy [expletive]! writes Joel Johnson, "I've got my own flying drone." He's so giddy, he can barely contain himself. "I'm going to fly a drone! ... I'm basically the CIA and a spaceman all in one ... I'm going to get arrested, and I'm going to be a hero."

For $300 — so we're not talking peanuts, but we're not talking $20,000,000 either — you can have your very own spybot! They've been around for more than a year now. Why should the Air Force, the CIA, the police and the border patrol have these things and not the rest of us? This toy, says Joel, who reviews new gadgets for the tech site Gizmodo, is designed for "aviation dabblers who want to look over their neighbors' fences." 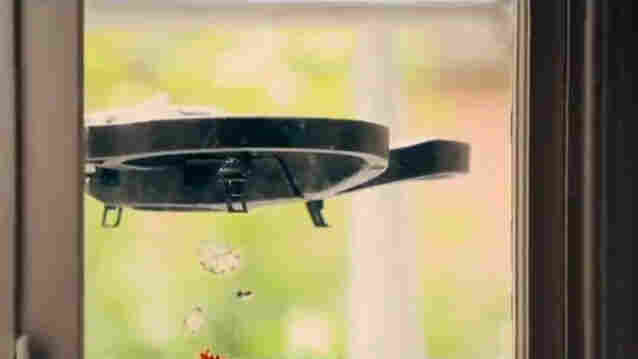 It's not marketed that way. Parrot, the French-based manufacturer, sells it as a [rich] kid's toy to fly, or use to play combat games with friends. Shaped like a spherical housefly, it's about a foot across, but what it really is, says Joel, is "a flying robot controlled by your phone, with a camera that records the world below as if you're sitting in a tiny cockpit."

It's got cameras. Plus a video recorder. You just tilt your phone (amazingly, it's that easy) and the drone will go left, right, higher, lower. Its range, for the moment, is slight and its batteries wear out quickly, but when it's up, it will go where you tell it to and it will show you what it sees.

In this ad, a guy sitting on a Paris rooftop sends his droid down to the streets below, where it delights (but doesn't frighten) a little boy, charms (but doesn't harass) a cute girl, then ogles (but doesn't bother) a couple doing a tango. Then it floats up five or six stories to gaze directly at some church gargoyles. It then returns to its owner, who smiles with obvious satisfaction. If that guy were a gossip or a spook, his smile might be even bigger. As you'll see, his phone displays three options, "fly," "record," "share." Isn't that what spies do?

From the reviews I've read, this is a nicely built, hardy machine that can be hacked to be even better, with sharper cameras, longer flight times. Plus, it's got tremendous naughty boy/girl appeal. Here's a portion of Joel's review. He wrote this with a big fat grin. You can feel it.

The first minute is magical — with a single button press, your own little drone hops a meter into the air. And just sits there. Waiting. Next, you fly that [expletive] right into a wall ...

Neither of the cameras — the front facing 720p one or the lower-resolution cam that points straight down — are any sort of magic. (Think cell phone camera from 5 years ago.)

The tilt-to-control flight interface is so instinctive that it is borderline overwhelming. That's it? It tilts just like I tilt my phone?

Flying an AR Drone makes you feel like a robotic Peeping Tom crossed with a cybernetic monk with a splash of soon-to-be-killed Call of Duty side-story operative.

OK, I'm too old to play Call of Duty, but I get the idea, I get the appeal, heck, I'm actually wanting one, but I'm also thinking, what if these things become ubiquitous? We're reading a lot right now about President Obama's use of drones in warfare, about police departments using them more and more, but if bullies and baddies in high schools, if nasty college pranksters, if crooks, gossips, landlords, lawyers, reporters (sigh), paparazzi and angry spouses start using them? What if they get smaller (the Defense Department already has teeny ones) and quieter, what if we don't know that they're there? I have a creepy feeling that we're about to cross some line that's going affect how we feel about "outside."

The Sky Formerly Known As Empty

The sky, for most of us, is an empty place. If you live high off the ground, you figure you're getting away from people, from prying eyes, from inspection. "Above" (minus the occasional pooping bird) is a non-intrusive zone. But for how much longer?

These flying toys are the pioneers. There will be more. As they proliferate, we will not be sure, when it's night and the curtains are open, what might be out there looking in. Last year on YouTube, a little French film featured a scene where a boy starts making out with a girl, only to notice two drones hovering out the window. The drones belong to his friends, who are peeping remotely. When the girl notices, she knows exactly what's happening and she slaps the boy, who, startled — well, take a look.

I guess what looks, at first blush, like a cool intelligence-gathering device, then a weapon, then a police tool, then a border monitor, now a tantalizing toy, may turn out to be multi-pronged invasion that affects everybody. People need to be able to get away from each other. We need time alone. We need to be able to find a meadow, lay down in the grass and look up at the blue nothing above us.

But what if, lying there in the quiet, we have the odd sense that there are eyeballs above us, teeny invisible ones, looking down, noticing?

Meadows will not be the same.

Researching this story I ran into another French YouTube film, nicely performed, where the flying drones, like HAL in 2001, have developed a will of their own. Drones, apparently, do not like being human slaves. In this scene, a freedom-seeking drone breaks and melts the hated human telephone that gives it orders, then chases and shoots at its human owner. The human, however, is not giving up easily ... You don't have to understand French to watch what happens next ...