Accessibility links
What Happened When Humans Met An 'Alien' Intelligence? Sex Happened : Krulwich Wonders... It's already happened. We humans have already met an intelligent alien. Not only that, we almost certainly had sex with them. And we did here, right here on Earth, not so many generations ago.

What Happened When Humans Met An 'Alien' Intelligence? Sex Happened

What Happened When Humans Met An 'Alien' Intelligence? Sex Happened

We have dreamed about it for so long. We've told stories, made movies, imagined what it would be like when we humans have our first "close encounter" with an intelligent alien, a creature about our size, who can gaze back, talk (even if we can't understand what's being said) who can scare us, thrill us, make us feel its mind. Who wouldn't want a moment like the one in E.T., when the little alien puts out his finger? But that's the movies.

We now know how big the universe is, how far the stars are from each other. Just as I was getting used to the idea that even if there's intelligent life out there, there's no way we'll ever be able to find the light years to get together, I opened Chip Walter's new book, Last Ape Standing, and discovered — it's already happened.

We've already met our intelligent alien. We almost certainly had sex with them. And we did it here, right here on Earth, not so many generations ago.

In Chip's book, he describes one such encounter: We're in Europe, in a forest, maybe. It was an ordinary day, around 40,000 years ago, and a small band of Homo sapiens, some hunters, slender, looking much like us, their families nearby, are moving through the woods, looking for a boar, rabbits, something to eat, when all of a sudden "they" appear.

"Imagine this encounter, and its shattering effect," writes Walters. "Each group must have gazed at the other in bewildered amazement."

In an instant they would have seen that these creatures resembled them, but were clearly not one of them. Why didn't they communicate in the same way or even make the same sounds? This wasn't simply a different tribe ... this was another creature altogether, perhaps a god or an animal, or something in between.

God? Animal? Something In Between

On one side of that meadow stood ... us, or rather our ancestors, a group we now call Cro-Magnon (after the cave in France where their bones were discovered). We were modern humans 40,000 years ago, emigrants from Africa, baby-faced, scant of hair, but loaded with brain. We were smart. We probably carried sharp hunting tools of our own design, flint knives and spears for throwing and we had taught ourselves to kill animals from a distance — animals like those aliens making mysterious noises on the other side of the meadow. 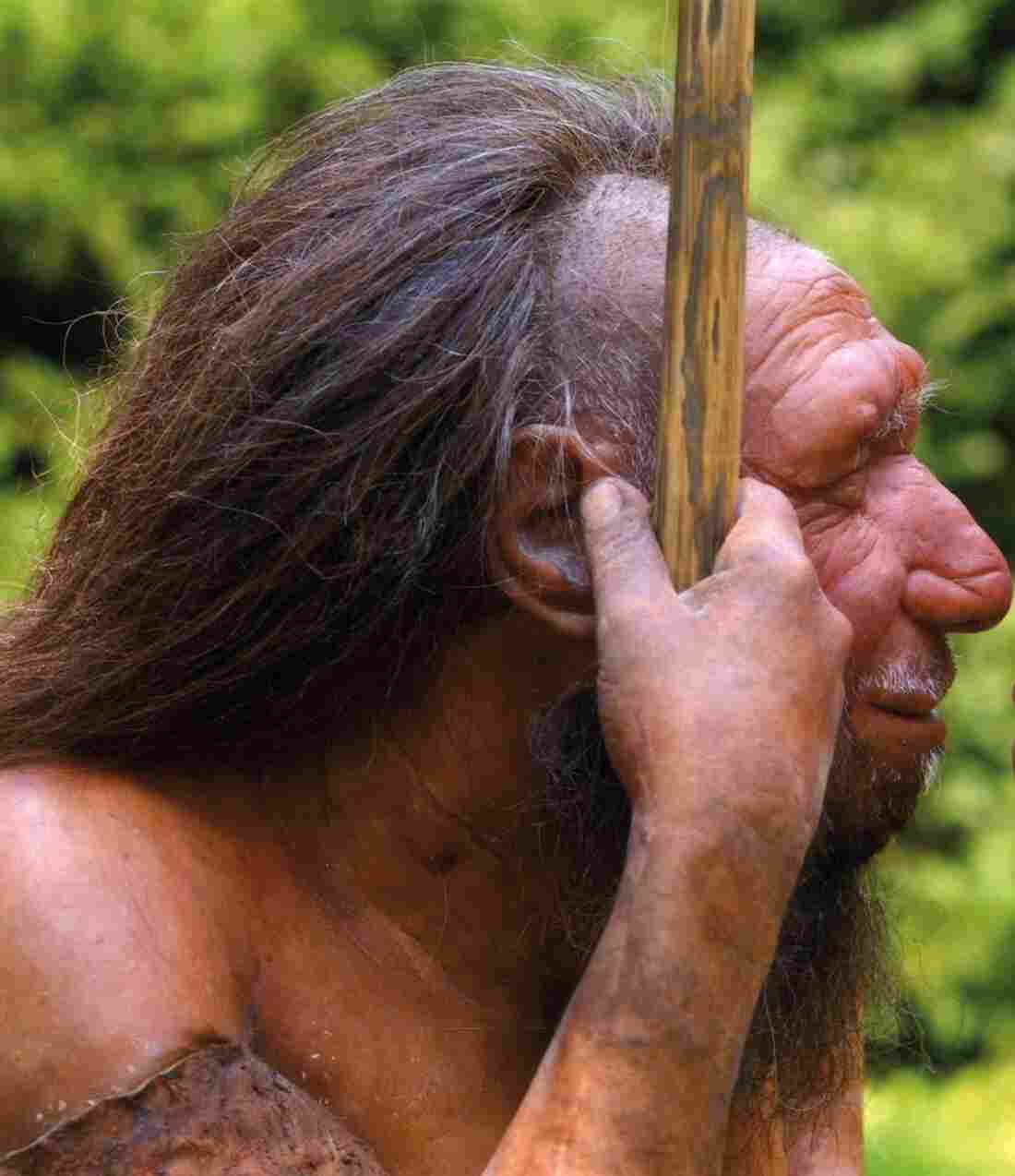 What did the other group look like? They looked kind of like us, but stronger. Their hands were huge, their shoulders big, rounded with muscle, their faces, ah, their faces came with enormous noses, rich with nasal membranes that could warm the cold, dry air they breathed up north, where they lived.

We were more recently up from Africa, still dark skinned. They'd been 200,000 years in Europe, had grown fair, freckled and some of them had red or blond hair. And while you wouldn't know it from looking, their brains were even bigger than ours, at over 1700 cubic centimeters. "That's about 300 ccs larger than your brain or mine," says Walter. We had never seen their like, but you, you reading this, you know them from photos and magazines. They were Neanderthals. And Neanderthals have gotten a bum rap for the last hundred years. 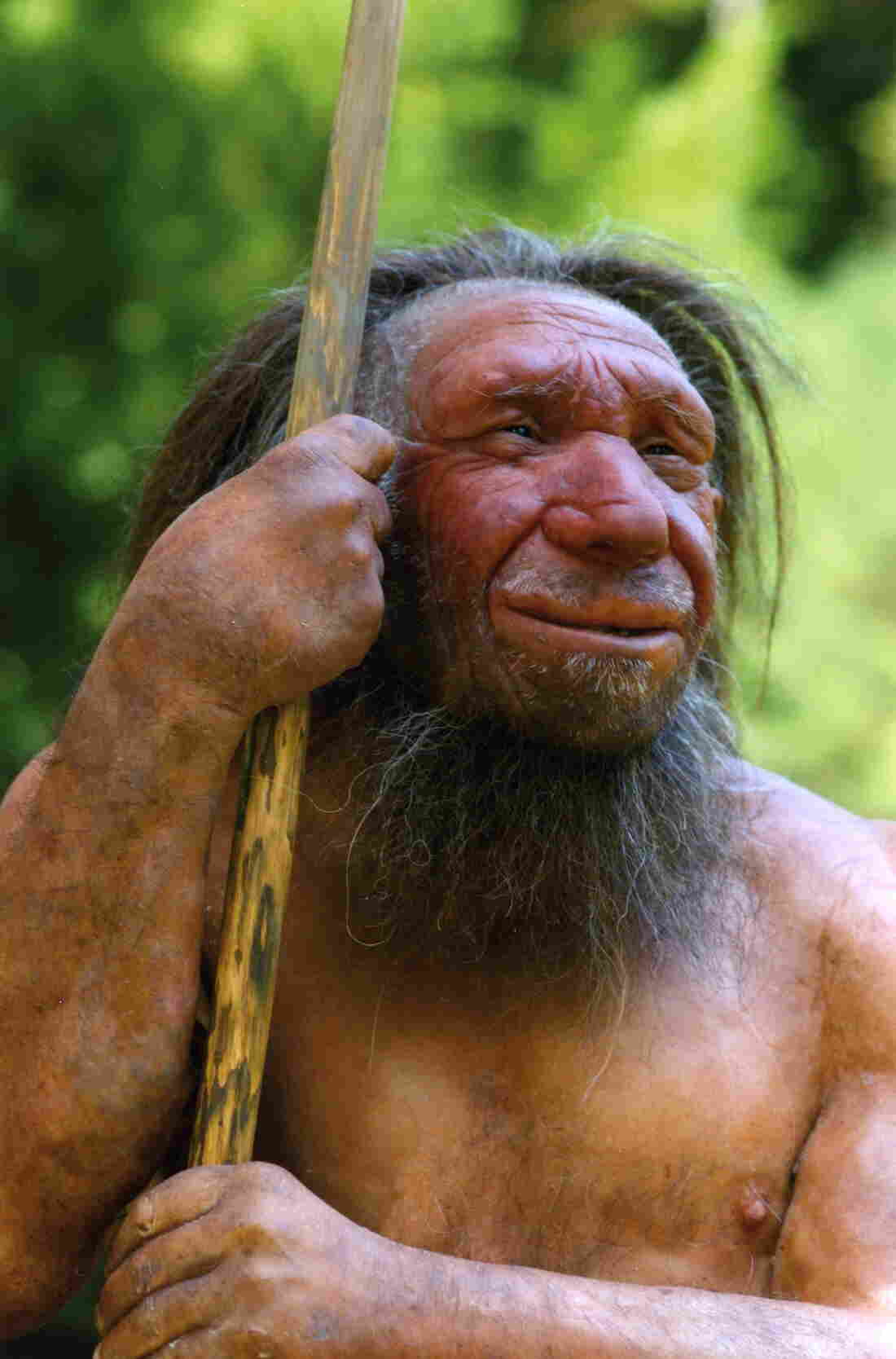 Caveman With A Club?

We think of Neanderthals as primitives, stooped, brutish, club bearing — one of those not-quite-upright apes in a standard Evolution of Man cartoon. But they weren't stooped. That was an error. In 1908, a prominent French scientist, Marcellin Boule, examined a set of Neanderthal bones found in Southern France, put them together, and discovered an apish, bowed figure. He decided that's what all Neanderthals looked like, but he was wrong.

Boule's specimen was 40 to 50 years old, seriously old for a Neanderthal. He had suffered from chronic arthritis, "a disease that had cruelly twisted the man's spine," Walters writes. (Thus, the stoop.) "Walking must have been agonizing given the state of his bones. He died with no more than two teeth, which would have made eating the normal rough, Neanderthal diet nearly impossible. Yet this man's fellow tribesmen must have carried and fed him specialized foods for years, otherwise he would never have lived to such a ripe age."

So these people (and they were "people" — we share a common ancestor; living up north for 200 thousand years had changed them and made them a different species), they were hardly "brutish." At the very least, they were gentle to their elders. They must have carried, fed and cared for that old fellow for years. What's more, there's evidence they thought about life in complicated ways.

There's a gravesite in Iraq where a Neanderthal was found, "positioned fetal-like, as though he were sleeping." Neanderthals buried their dead before we Homo sapiens did, and on this site, the skeleton appears to have once surrounded by flowers and evergreens. Investigators found traces of pollen below and around him, as if to say, "We didn't abandon this man. We too knew how to love, to grieve, and we laid him here with the same tenderness you have for your people, and like you, we wished him soft passage ..." 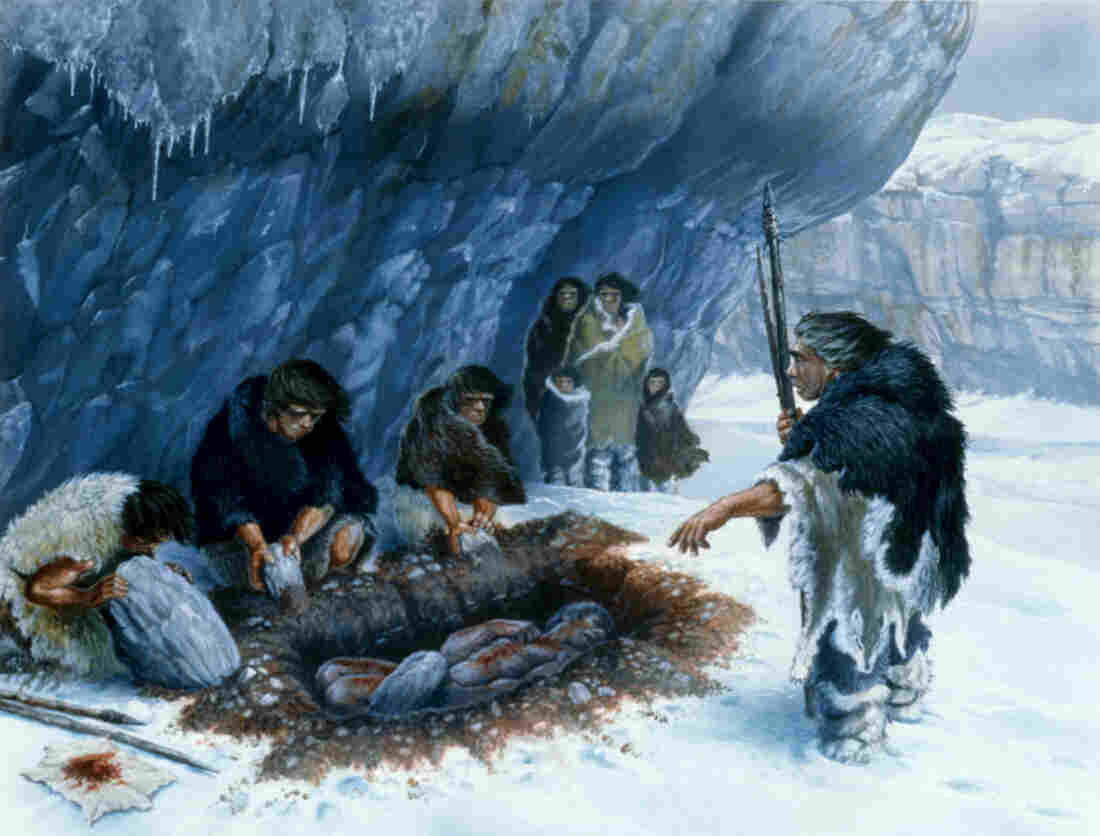 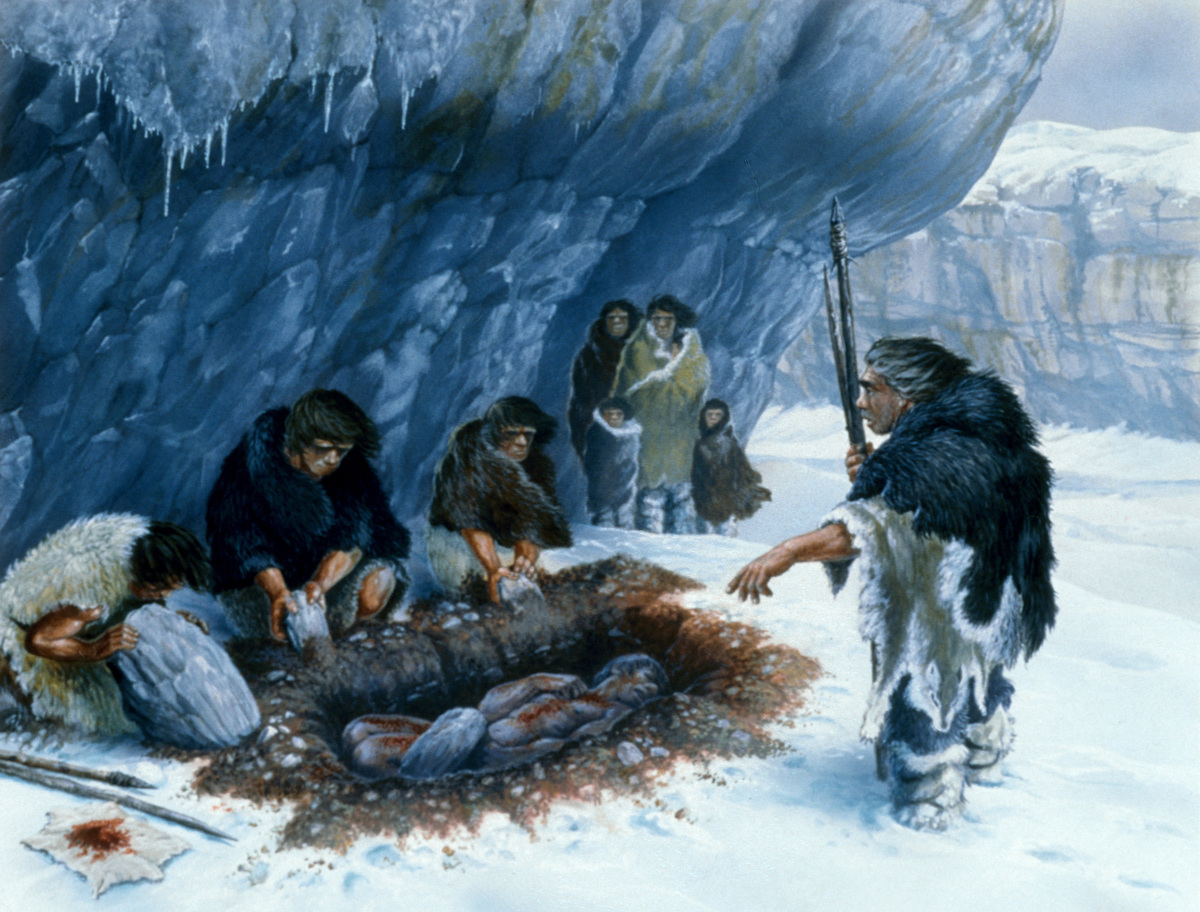 Neanderthals, says Steven Mithen of Reading University, may have spoken a more musical, tonal language, a mix of cooing and keening, singsong beats, accompanied by gestures. Chip Walter likes to think that in their speech, and early on with their burial practices, they may have been a touch "more softhearted than we are," but we really don't know.

So what happened that afternoon in our meadow, in that moment of very first encounter? Did we think, "Food!" and attack? Did we flee? Did they? Or did we watch them, wait, take tentative steps toward each other, wondering, "What are they? Can we get closer? Can we trust them?" "The big and primal question — the mastodon in the room so to speak," writes Walters, is the simplest one: "Are they a friend or an enemy?"

Killing Them With Kindness?

Anthropologists differ on what happened. There is some evidence, but not a lot, that we regularly attacked and eventually annihilated the Neanderthals. There's evidence too, that we crowded them out of the best hunting sites, making it harder for them to earn a living (and they needed to eat more than we do to stay alive). But the third possibility, writes Chip Walter, is that "if we killed them at all, we killed them with kindness. We neither murdered them nor outcompeted them. We mated with them and, in time, simply folded them into our species until they disappeared."

Love The One You're With

About 35,000 years ago, Homo sapiens and Neanderthals lived within shouting distance of each other in France and Spain for, at the very least, a few thousand years. If they mingled, some might have gone farther. There is a skeleton of a boy, found in Portugal, who lived after the last Neanderthals died in southern Spain, whose body seems to be a hybrid, part them, part us.

But the clincher is in your cells. I'm talking about you, you reading this, unless you are 100 percent Yoruba or San (groups that never emigrated from Africa). In 2010, scientists at the Max Planck Institute in Germany, discovered that most humans on Earth, especially if they descend from Europe and most of Asia, carry about 1 to 4 percent Neanderthal DNA in their cells. Proportions will vary. British comedian Eddie Izzard, discovered he's 2.8 percent Neanderthal. You don't carry Neanderthal DNA unless someone up your family tree coupled with one.

So that's our proof: that our first encounter with an intelligent alien led to ... umm, well ... more.

Chip Walter's Book is Last Ape Standing: The Seven Million Year Story of How and Why We Survived. It's the story of our family tree, which includes, amazingly, 27 (and still counting) different varieties of walking, upright humans. Nature produced many, many different human species, only one line of which led to us. The rest just blinked out. Here's a gorgeous look at some of our predecessors:

As for close encounters, Neanderthals aren't the only intelligent humans who lived alongside us. In Siberia, a separate species called the Denisovans hunted and settled in the Altai Mountains 40,000 years ago. Another group, the Red Deer Cave people lived in south central China as recently as 11,500 years ago. And a mini-version of humanity, Homo floresiensis, often called "hobbits" may have been on an Indonesian island as recently as 17,000 years ago. Henry Gee, of Cambridge University, likes to think they may still be with us, hiding in some remote cave or forest in Indonesia.